H 43.31 in. W 60.24 in. D 59.06 in.
PH Upright Piano, Cognac Color Leather with Chromed Metal Parts and Wood Panels
By Poul Henningsen
Located in Copenhagen, DK
- All prices are listed ex works. - 5 year guarantee. - We regularly crate, ship and install PH Pianos worldwide with full insurance. For those who want a traditional acoustic u...
Category 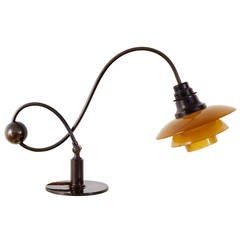 How Much are Poul Henningsen Piano?