H 20 in. W 17.5 in. D 8.5 in.
Antique Sheffield Shaving Mirror
Located in Woodbury, CT
The mirror has a wooden back. The glass pivots up and down. The glass is framed with grape leaves and grapes. Two round columns attached left and right. The have urn form finials and...
Category

H 26.5 in. W 24 in. D 6.5 in.
Marquetry Inlaid Shaving Mirror
Located in Woodbury, CT
The oval framed mirror within a swing stand, with three leg support atop a single drawer base.
Category

H 75 in. W 14 in. D 10.25 in.
Antique English Oak Shaving Mirror
Located in Port Chester, NY
Charming look, lovely oak with good patina. Adjustable. Wood backing protects the original mirror, which has some distress as would be expected.
Category 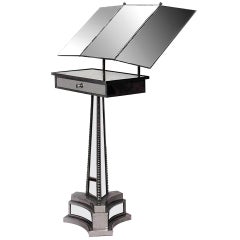 H 22.5 in. W 17.5 in. D 8 in.
The Shaving Mirror of Purser Wardlaw
Located in Lymington, Hampshire
This concave, circular shaving mirror is set in a moulded ebonized wood frame. The reverse has a printed trade label stating ‘J Abraham Optician & Mathematical Instrument Maker to hi...
Category

The Shaving Mirror of Purser Wardlaw

H 19.5 in. W 16 in. D 11 in.
English Regency Rosewood Hanging Shaving Mirror
Located in Woodbury, CT
With an unusual domed shape back, surmounted by a feather form above a carved rose and leaves. The mirror tilts, but not a lot. It is flanked by two curved doors with shelves behind....
Category

H 19.5 in. W 16 in. D 11 in.
Art Deco Amber Glass and Chrome Shaving Mirror
Located in Brooklyn, NY
Art Deco, trifold, amber glass, shaving mirror features an articulating base made of chrome and painted steel. The side mirrors do not move but the whole mirror tilts vertically.
Category

H 11 in. W 11 in. D 3 in.
Edwardian Brass and Marble Shaving Mirror on Stand
Located in New York, NY
The round mirror on an adjustable support with marble-inset shelf.
Category

H 59 in. Dm 12 in.
Desirable Classical Shaving Mirror, Massachusetts, circa 1810
Located in Providence, RI
This shaving mirror has a very nice bow front form, which is similar to many bow front New England chests. The mounts appear original, as is the mirror.
Category

H 24.75 in. W 23 in. D 9.75 in.
American Chippendale Mahogany Serpentine Dressing Shaving Mirror, circa 1790
Located in Shippensburg, PA
A fine surviving example remaining in exquisite original condition, this dressing mirror was probably crafted in Philadelphia during the last years of the 18th century. The selection...
Category

H 25 in. W 16.5 in. D 8 in.
Large Height-Adjustable Nickel Vanity or Shaving Mirror, Sweden, 1950s
Located in Maastricht, NL
A large, height-adjustable (75-95 cm) vanity or shaving mirror made of nickel and wood. The diameter of the mirror itself is 36 cm (14"). A simple, elegant and masculine design and i...
Category

H 30.75 in. W 13 in. D 29 in.
Victorian 19th Century Painted Adjustable Shaving Mirror, circa 1860
Located in Norwich, GB
Victorian 19th century antique painted adjustable shaving mirror with a round adjustable mirror. It has two opening centre compartments and is supported by a turned reeded column. It...
Category

H 64 in. Dm 20.5 in.
19th C. Mahogany and Bronze Table Top Vanity Shaving Mirror, c.1840-1870
Located in San Francisco, CA
About This is an original mahogany table top vanity or shaving mirror with one drawer, ball feet and bronze knobs. Mirror is adjustable and tilts. This piece has retained its orig...
Category

H 33.75 in. W 17 in. D 7.25 in.
Art Deco Chrome Pedestal Men's or Ladies Shaving Mirror with Brush Holder
Located in Hamilton, Ontario
This chrome or nickel-plated pedestal shaving stand is unsigned, but presumed to have been made in the United States in the 1930s in the Art Deco style. The stand is well constructed...
Category

H 55 in. W 13 in. D 13 in.
Charming Folk Art Shaving Mirror with Original Paint
Located in Brooklyn, NY
Tabletop shave mirror (circa 1920s, USA) with a tiltable mirror and swiveling shaving cream or soap bowl (bowl only partially swivels). There is a narrow razor holder on one side, an...
Category

H 64.5 in. W 19 in. D 19 in.
Brass and Galvanized Metal Standing Shaving Stand
Located in Lambertville, NJ
Elegant brass and galvanized metal standing shaving or dressing mirror. The Classic shield shaped mirror flanked by a candleholder with reflector. The center with a gallery edge tabl...
Category

H 62 in. Dm 16.5 in.
Edwardian Walnut and Brass Gentlemen's Shaving Stand
Located in Manchester, GB
A very unique Edwardian Gentlemen's shaving stand, the legs and telescopic central column are brass foil on solid steel and the two shelves are solid walnut. The bevelled round mirro...
Category

H 56 in. Dm 13 in.
Wonderful English Silver Plated Shaving Dressing Tilt Candelabra Wreath Mirror
Located in Roslyn, NY
A wonderful English silver plated shaving or dressing mirror with a tiltable oval mirror framed by grapes on a vine, flanked by two- arm candelabra on either side, with a wreath deta...
Category

H 26.5 in. W 29 in. D 6.5 in.
Victorian Wicker Mirrored Shaving or Vanity Stand with Shelves
Located in Miami Beach, FL
Part of a Senator's wife's wicker collection, this shaving or vanity mirror with display shelves is a very rare piece. Almost every element of Victorian wicker is used here: open lat...
Category

Shaving Mirrors For Sale on 1stDibs

Find a variety of shaving mirrors available on 1stDibs. The range of distinct shaving mirrors — often made from wood, glass and mirror — can elevate any home. Shaving mirrors have been made for many years, and versions that date back to the 18th Century alongside those produced as recently as the 21st Century. Shaving mirrors made by Victorian designers — as well as those associated with Art Deco — are very popular at 1stDibs. Karl Springer produced beautiful shaving mirrors that are worth considering.

How Much are Shaving Mirrors?

Prices for shaving mirrors can differ depending upon size, time period and other attributes — at 1stDibs, shaving mirrors begin at $390 and can go as high as $16,223, while the average can fetch as much as $1,699.

Questions About Shaving Mirrors
Prices for most shaving mirrors on 1stdibs are negotiable. You’ll see a "Make an Offer" button on the item details page, indicating that the seller is willing to consider a lower price. It’s not uncommon for customers to get 15–25% off the list price after negotiating. See our tips for negotiating like a pro.
Only experienced, professional sellers who have applied and been thoroughly vetted by our team of experts can sell shaving mirrors and other quality items on our site. Learn more about becoming a 1stdibs seller.
The 1stdibs Buyer Protection Guarantee provides coverage for qualified purchases in the unlikely event that the item arrives not as described or is damaged. We’ll work with you and the seller to find a resolution, ensuring your satisfaction. View details
We have partnerships with the world's best shipping providers to facilitate seamless and fully-insured delivery from the seller's location directly to you, wherever you are in the world. Our logistics team is comprised of dedicated members who arrange all the details with our partners, servicing and supporting all shipments. Learn more about shipping on 1stdibs.
For your convenience, we offer multiple payment methods, including all major credit cards and PayPal. For many purchases we also offer financing options or wire transfer. Learn more about payment options on 1stdibs.