Albert Brenet, who recently celebrated his hundredth birthday, is surely the last of the true adventurers, having spent his life sailing the oceans of the world as the French Navy's official artist.

He was born in Harfleur, near Le Havre, in 1903, and 'at home, the talk was always about the wind, the sea, and the ships'. Then there were the three-masters with their exotically perfumed cargoes of spices and coffee.

The turning point in his life came when he first caught sight of the Bonchamp, one of the last three-masters to ply the seas, built at the turn of the century. As the crew was two men short, Albert gained a place on board and spent the next seven months sailing 'as they did in Colbert's day' - no electricity and just two buckets of freshwater per man per week. In between manning the rigging, he captured every instant of life on board, even in the roughest of seas.

From that moment on, Albert painted and drew everything that moved, from the firemen of Los Angeles to the feria in Seville, and, of course, a whole armada of ships. He became one of the Navy's official painters in 1936.

Albert thrilled to the sights of the Orient - the mosques of Iran, the souks of Tunisia - and was endlessly fascinated by the quality and continuity of Japanese civilization. Now enjoying a peaceful and well-deserved retirement south of Paris, Albert is the only artist ever to have been granted specialties in all three services - Army, Navy, and Air Force. 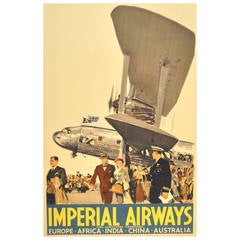 H 43 in. W 28.5 in. D 1 in.
Vintage Imperial Airways Poster
By Albert Brenet
Located in Los Gatos, CA
The RMA Canopus was the first of the twenty-eight long haul flying "boats" which Imperial Airways bought from Short Brothers almost straight from the drawing board in 1937. Here it ...
Category

Albert Brenet furniture is available for sale on 1stDibs. These unique items are often made from Paper, and are designed with extraordinary care. There are many options in our Albert Brenet collection of furniture, although beige editions of this piece are particularly popular. In-stock we have 3 vintage editions of these items, while there is also 0 modern edition to choose from. If you’re looking for additional options, many customers also consider furniture by and . Prices for Albert Brenet furniture can vary depending on size, time period and other attributes. 1stDibs's price starts at $884 and tops out at $3,398, while pieces like these can sell for $1,291.