Angelo Ungania was an Italian artist and sculptor, born in 1905. He studied at the Royal School of Ceramics. In the early 1920s, he worked as a decorator. In 1924, he lent his work at the artistic ceramics, Melandri-Focaccia factory, working with the company to introduce the casting technique in Faenza, Italy. In 1930, he collaborated with Pietro Melandri for the creation of the ceramic panel of the Madonna del Roseto, commissioned by the Hospital of the Infirm of Faenza, placing even his signature alongside that of the master. From the 1930s, he began traveling to Italy, collaborating with various manufacturers, including Montelupo Fiorentino, the Grace of Deruta and Perugia, the Salamandra, the Cantagalli, in Florence and the Fanciullacci.

In 1941, Angelo won the Faenza Award. At the end of the 1940s, he invited Lucio Fontana to create some works at his studio. In the 1950s, he moved to Ruta of Camogli, in Liguria, where he organized a ceramics workshop in his villa. Subsequently, during his short stay in Faenza, he collaborated occasionally with the Bottega Casadio Faenza.

Related Items
Centaur with a Bow or Sagittaire. Enameled Earthenware, France, circa 1950
By Jean Derval
Located in Paris, FR
Category 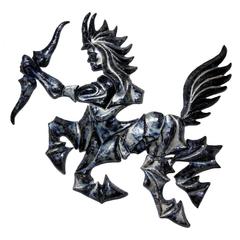 Centaur with a Bow or Sagittaire. Enameled Earthenware, France, circa 1950 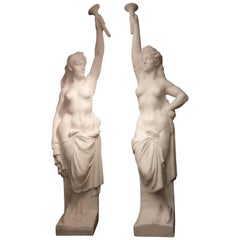 Large lamp base in ceramic by George Pelletier. France circa 1970
By Georges Pelletier
Located in Paris, FR
Category

Large lamp base in ceramic by George Pelletier. France circa 1970

Furniture Angelo Ungania are for sale on 1stDibs.com. These distinctive objects are often made of ceramics and are designed with extraordinary care. There are many options in our Angelo Ungania collection of furniture, although blue editions of this piece are particularly popular. Many customers also consider Furniture by Sandro Vacchetti, Renato Bassoli and Figli E Zaccagnini. The prices for Angelo Ungania furniture can vary depending on size, time period and other attributes. The price for these items starts at $5,737 and tops out at $5,737, while pieces like these can sell for $5,737 on average.