Antoine Calbet, a pupil of Alexandre Cabanel and François Émile Michel, Calbet also studied with the genre painter Édouard-Antoine Marsal. He made his public exhibition debut at the Salon de la Société des Artistes Français in 1880, and continued to take part in the Paris Salons until 1940. A gifted watercolorist as well as a portrait and genre painter, Calbet had a particular penchant for studies of languid female nudes. He also worked as a decorative painter, counting among his public commissions the decoration of several theatres, as well as the buffet restaurant in the Gare de Lyon in Paris and the restaurant La Grande Taverne in Dijon, for which Calbet painted a Scène de Brasserie. Calbet is perhaps known today, however, for his book illustrations, having taken over the commissions of the Czech artist Luděk Marold when the latter returned to Prague. Among the works illustrated by Calbet, were editions of Emile Zola’s Madame Neigeon, Guy de Maupaussant’s Bel Ami, Jean-Jacques Rousseau’s Confessions and Paul Verlaine’s Fêtes galantes. He also provided illustrations for magazine short stories, such as Henri de Régnier’s “Le veuvage de Shéhérazade”, published in the Christmas 1925 issue of L’Illustration. An exhibition of Calbet’s drawings and watercolors was held at the Galerie Georges Petit in Paris in 1909, and another at the Galerie Graat in Paris in 1932. 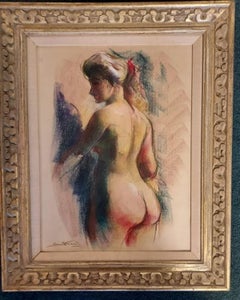 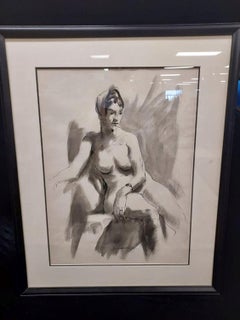 Woman in the Patio
Located in Pasadena, CA
Category

Antoine Calbet
Elegant Lady in the garden , Circa 1900

H 12.25 in. W 9.25 in. D 1.5 in.
Series of Four Studies by Antoine Calbet (circa 1920s)
By Antoine Calbet
Located in London, GB
An exquisite grouping of four drawings available together as one set (circa 1920s). These sketches are studies for larger works planned by the artist and are, considering their age, ...
Category