Arthur Ernst Becher was a painter and an illustrator of books and magazines. Born in Freiberg, Germany, he emigrated with his parents at the age of six to Milwaukee, Wisconsin. As a fine artist, Becher was known for his rural New York landscapes and historical scenes including Lincoln's Gettysburg Address. He received early training from F. W. Heine and Robert Schade and also painted at Jones Island, a fishing village near Milwaukee. In 1902, Becher became a student of renowned illustrator Howard Pyle, at the Brandywine School in Chadds Ford, Pennsylvania. Two years later, Becher married and settled in Ardsley, New York. In 1917, the couple bought a 125-acre farm in Putnam County, New York, where he painted rural landscapes and renderings of historical events such as Lincoln's Gettysburg Address. Pursuing a career in illustration, Becher gained recognition as a top magazine illustrator creating work for Scribner's, Leslie's and Appleton's. In 1908, he went to Europe on assignment and studied privately in Germany with Otto Strutzel, who was known for landscape and animal painting. During the 1930s, his illustration moved from magazine work to books. Becher exhibited at the Pennsylvania Academy of the Fine Arts and was a member of the Society of Illustrators. The Delaware Art Museum holds several paintings by the artist in their permanent collection. Becher's work was included in the 1996 exhibition N.C. Wyeth and the Brandywine School American Illustrators from the Golden Age of Illustration (1880–1960), at the American Illustrators Gallery / Judy Goffman Cutler Fine Art. In 1959, six of his early paintings were purchased by the Milwaukee Common Council. 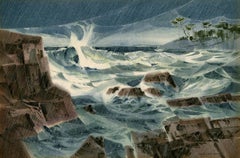 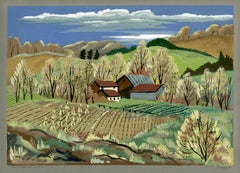