Brian Cooper was born in San Francisco and currently lives with his wife, artist Susan Logoreci, in Los Angeles. He earned his BFA from the San Francisco Art Institute and his MFA from the University of Southern California. His work has been exhibited at several galleries in Los Angeles like Acuna Hansen, Circus Gallery, Cirrus Gallery, Sam Lee Gallery, Track 16, Raid Projects and the Santa Monica Museum of Art. Cooper’s work has been included in several shows in New York including “Fuel for the Fire” curated by Dawn Kasper, as well as “Archaic Revival” curated by Dani Tull at Zic Zerp Galerie in Rotterdam. He has also shown at Guerrero Gallery in San Francisco, The Scottsdale Museum of Contemporary Art, The Tucson Museum of Contemporary Art, Green Gallery in Milwaukee, De Parel Gallery in Amsterdam, the Torrance Museum of Art and a solo show at the University of California Riverside. His work has been featured in national and international publications like Beautiful/Decay, Hi-Fructose, New American Paintings, Artwork, Artillery, Spain’s Rojo Magazine, Juxtapose and France’s Le Monde Diplomatique. Cooper has also been interviewed by Cantanker art magazine from Austin and the French art blog According to Proust. His work was also included in the L.A. Weekly’s 2008 Biennial, Some Paintings and is a recipient of the 2009 West Prize in Philadelphia. 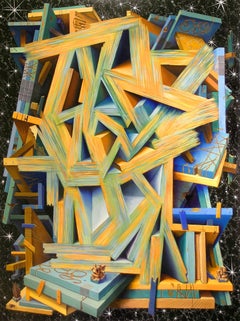 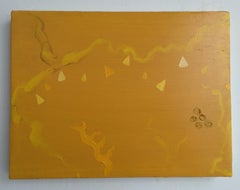 H 9 in. W 12 in.
Colorsphere 3
By Susan Moss
Located in Santa Monica, CA
Oil and oil crayon on canvas. Signature on back.
Category

H 36 in. W 84 in. D 2 in.
Vibrations of the Interior
By Gloriane Harris
Located in Santa Monica, CA
Oil on canvas.
Category

Gloriane Harris
Vibrations of the Interior, 1979

H 12 in. W 12 in.
Jack Reilly, Primary Unit with Double Diagonals, Acrylic on Shapped Canvas,2012
Located in Santa Monica, CA
Painting on stretched canvas over sculpted stretcher bars, constructed by the artist. The work has been painted to give the illusion that it is a raised cube when in fact it is a 2-d...
Category

H 42 in. W 60 in. D 2 in.
Study with Overlapping Diamonds II
Located in Santa Monica, CA
Acrylic on Canvas Board
Category

H 8 in. W 8 in.
Always look at the bright side of life
Located in Santa Monica, CA
Acrylic
Category

Philip Vaughan
Always look at the bright side of life, 2020

1stDibs offers a wide variety of authentic Brian Cooper art for sale. You can also browse by medium to find art by Brian Cooper in oil paint, paint and more. Much of this artist's original work was created during the 21st Century and Contemporary, and is mostly associated with the Abstract style. Not every interior allows for large Brian Cooper art, so small editions measuring 48 inches across are available. Customers interested in this artist might also find the work of Francisco Valverde, Gary Lang and John Zoller. On 1stDibs, the price for these items starts at US$NaN and tops out at US$NaN, while the average work can sell for US$NaN.