Charles Everett Johnson was a painter and a commercial artist born in Gilroy, California, USA, on December 7, 1866. He studied in Paris with Richard Miller (1909–13), and later on at the AIC. He remained in Chicago for several years and in 1913, while working as an art director for the Lord and Thomas Advertising Agency, he was put in charge of the Sunkist account. Within a few years, this advertising campaign was a national success. By 1925, Johnson had returned to Southern California and established a home in Altadena and a freelance studio in Los Angeles. He taught advertising art at the Chouinard Art School and was active in Los Angeles until the early 1940s. Many artists apprenticed under Charles Everett Johnson including Haddon Hubbard Sundblon. Undoubtedly, the most influential magazine advertisements were those produced or supervised by Charles Everett Johnson. From the 1920s to the 1940s, Johnson produced many paintings that first appeared as Sunkist magazine ads and then became label images. Sunny Cove is an example of the style he was known for. 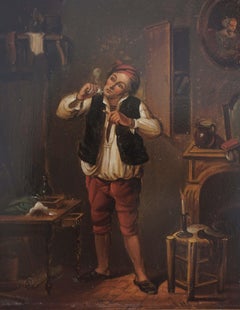