Clément Massier, an accomplished ceramist born into a multi-generational family of potters working in Vallauris, France in the second half of the 19th century, transcended his family’s metier. Rather than creating utilitarian objects as a means unto themselves, he used the ceramic medium as an aesthetic platform to make art. Among the many international awards earned during his lifetime, Massier was awarded a gold medal at the world’s fair, Exposition Universelle held in Paris in 1889. At the Exposition, it was Massier’s ceramic glazing techniques, using turquoise metallic luster, which captured the world’s attention. Massier’s metallic luster glazes produce the dual properties of reflectivity and transparency to create iridescence. To achieve this, Massier fired his ceramics in a three-tiered process at increasingly lower temperatures. He applied the final glaze created from a metallic clay compound with a brush. When the blackened vessels had fully cooled, they were buffed until shiny to reveal his iridescent inspirations of nature. Each piece produced was a unique object revealing not only the hand of the artist but also the variable effects of temperature, natural elements and their interactive relationships. His glazes are illusory interpretations fused into fired earthenware. Conversely, the ceramic object’s solidity belies its ephemeral nature which constantly changes in light. This duality naturally inherent to this art medium is a theme that Massier echoes in his subject matter. 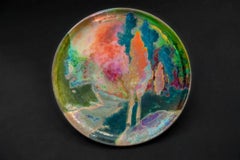 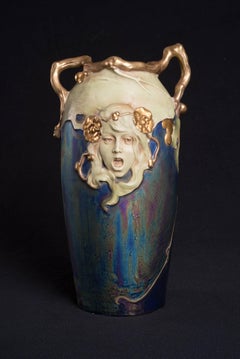 Previously Available Items
Tree Pods & Serpent Vase
By Clement Massier
Located in Chicago, IL
An encounter with Massier’s luster-glazed ceramics is an embarkation on an acid-colored trip, the sort of exploration which inspires deep reflection and requires transparency. Clemen...
Category

H 16 in. W 8.5 in.
Spring Flowers
By Clement Massier
Located in Chicago, IL
An encounter with Massier’s luster-glazed ceramics is an embarkation on an acid-colored trip, the sort of exploration which inspires deep reflection and requires transparency. Clemen...
Category