Edmund Adler had been taught at the Viennese School of Art History (focus: lithography) from 1892 until 1896. Subsequently, he studied from 1896 until 1903 at the Viennese Academy of Fine Arts, where his teacher/instructor was Christian Griepenkerl, who was a follower of the so-said Viennese Ring Road style. Adler received the Rome Award by the academy, a fact which enabled him a one-year stay in the eternal city. Having returned to Austria, Adler moved with his family to Mannersdorf at Leitha Mountains in 1910. After the outbreak of the First World War, Adler was forced to go to war. He returned only in 1920, having been left in war captivity in Russia then. In the subsequent period, the painter dedicated himself solely to the fine arts and worked continuously until old age. Only half a year before he died, Adler put his brush away at the age of 88. He created especially portraits as well as children and youth scenes that convey an ideal world. The Edmund Adler Gallery was founded in 2006. It is situated in the castle of Mannersdorf, which presents the collection of Adler's works. 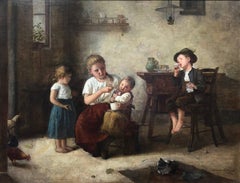 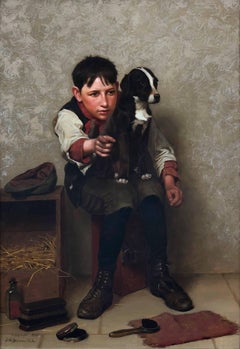 A Conundrum in the Kitchen
By Frank Hyde
Located in Missouri, MO
Category

A Taste Before the Meal
By Hermann (Armin) Kern
Located in Missouri, MO
Category