Ernst Barlach was a German expressionist sculptor, printmaker and writer. His participation in the war made him change his position, and he is mostly known for his artworks protesting against the war. Barlach trained under French artists and produced Art Nouveau-styled sculpture and works on paper, but at first unable to find success. This led to a trip to Russia where the artist began creating figurative sculptures inspired by early Gothic art, carving spiritual and emotional themes from hard-woods and bronze casts. Barlach's fame increased after the war, he received many awards and became a member of the prestigious Preußische Akademie der Künste (Prussian Art Academy) in 1919. He was a supporter of the war in the years leading to World War I, he generated many anti-war sculptures based on his experiences. Later in life, he concentrated on prints, producing hundreds of black-and-white lithographs and woodcuts, some of which illustrated books and plays he wrote himself. Remarkable original Expressionist lithograph, a reminder of suffering from war and its consequences on human's life.

(Biography provided by Wallector)
Applied Filters3 results
Artist:Ernst Barlach
to
1
Item Location
3
2
1
2
1
Overall Height
to
Overall Width
to
3
3
2
1
7
748
689
594
535
2
1
1
Walpurgisnacht - Rare Book Illustrated by Ernst Barlach - 1923
By Ernst Barlach
Located in Roma, IT
Walpurgisnacht is an original Rare Book engraved by the Expressionist German artist Ernst Barlach (1870- 1938) and taken by the first part of the Faust by Wolfgang Goethe (Frankfur...
Category 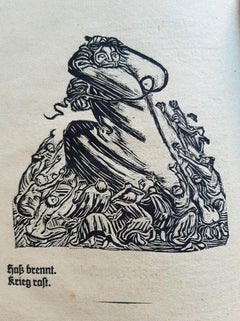 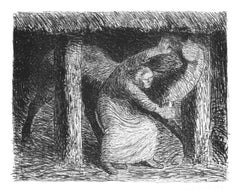