Fabrizio Breschi was born in Livorno, Italy, in 1950. Livorno greatly influenced Breschi’s art from childhood. He expressed reality through architectural-geometric shapes transformed into industrial landscapes, surreal seascapes and robots. “I amused myself depicting the human race in the guise of robots, adding a surreal note to observed daily activities. I sought to glimpse the ultimate destiny of a technological society,” he said. At the age of four, Breschi was winning awards and was encouraged to pursue a career in art. He was accepted at Liceo Artistico di Porta Romana in Florence and later Florence’s Accademia di Belle Arti di Firenze where he became an assistant professor at the age of 23 and 35, Breschi was the youngest professor-lecturer in the history of the prestigious Accademia di Brera, Milano, to hold the painting chair –– truly a great honor. Breschi layers matte acrylic paints to resemble polished chrome, creating gleaming tubes that course between canvases like elaborate mechanical systems –– a three-dimensional sculpted, an effect that is a technique of his own. “My pleasure derives from the difficulty involved with obtaining those hues with a brush, a process where I challenge the technological means developed in our time,” he says. Breschi retired from teaching in 2007 to immerse himself in painting and sculpture. He has exhibited in solo and group exhibitions in Italy, France, Spain, Germany, Switzerland, Greece and the United States. His work is in museums and corporate and private collections. His multi-media sculpture Cycladic Today is on the facade of the Nicholas P. Goulandris Foundation –– Museum of Cycladic Art, Athens; Love Story, the 25-foot tall metal sculpture, is in the Piazza Della Vittoria in central Livorno while a smaller sculpture called the Twin Towers is in the garden of the Fondazione Trossi Uberti, Livorno. From October 2017–December 2017, he had a solo exhibition at the FR Gillette Gallery in Hudson, New York. His robots were a feature at the First International Conference on Soft Robotics sponsored by the BioRobotics Institute in Pisa in April 2018. Breschi was honored by his hometown city with a retrospective exhibition of his work at the Museo Civico G. Fattori titled BRESCHI: 1976–2016, a 40-year retrospective for an artist truly 40-years ahead of his time. 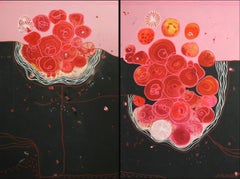 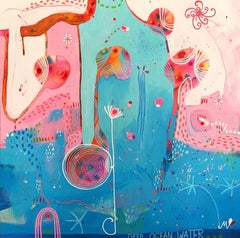 Queen Of Pink Night
By Malgosia Kiernozycka
Located in Lake Worth, FL
Category

Martini AT The Bar At Midnight
By Malgosia Kiernozycka
Located in Lake Worth, FL
Category

Malgosia Kiernozycka
Martini AT The Bar At Midnight , 2019

Hurricane Part I
By Malgosia Kiernozycka
Located in Lake Worth, FL
Category

So Sorry
By Malgosia Kiernozycka
Located in Lake Worth, FL
Category