Farai Walter Darare was born in Murewa, Zimbabwe on March 16, 1980. He started carving when he was just seven years old and was inspired to become an artist by his very famous father, Casper Darare. His father wanted his son to go to college and university but Farai said once sculpting is in you, you can never get it out. When Farai graduated in 1996, he started selling his pieces full time. He took pieces to South Africa to sell and eventually stayed and worked with his father there for four years until his father tragically passed away. At first, he started with creative abstracts but soon he was carving busts and realist pieces.

"I think and feel that I have my father’s touch. My strength lies in my amazing ability to create the exact work my father used to carve," says Farai.

After his father's death, Farai returned to Zimbabwe. Farai says that women are the source of his inspiration. He loves to sculpt them and to uncover their inner beauty. He feels that women are not respected or appreciated enough and he wants to let the world know how important they are. Farai adds, "They are our mothers, sisters or daughters; they look after us and care so much about us. They are soft and warm and loving." Farai's work is very creative, original and well-polished. He is an enthusiastic and dedicated artist with great things ahead. His pieces are very popular and can be found in private collections all over the world. 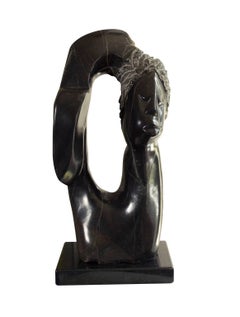