Ferdinand Andri was an Austrian engraver and artist. Between 1884 and 1886, he began an apprenticeship with Johann Kepplinger at Ottensheim, near Linz. From 1886 to 1893, he studied at the Academy of Fine Arts in Wien with Julius Victor Berger and August Eisenmenger. Later, from 1892–94, he attended the School of Art with Caspar Ritter and Claus Meyer. He often traveled all around Italy, France, England and North America. In 1897, he married Charlotte Hampel, an Austrian painter. He was a member of the Viennese Secession from 1899 and 1909, of which he became the president in 1905–1906. In 1901, he realized the manifest for the tenth exhibition of the Viennese Secession. During these years, he collaborated with the magazine Ver Sacrum. From 1923–29, Ferdinand Andri was the president of a perfection school at the Academy of Fine Arts in Wien, where he taught until 1939. He was also the co-founder of the Austrian Werkbund, a movement that promoted handicraft. In 1939, he retired, but during the same year he became a member of the Wiener Künstlerhaus. His name was inserted into the so-called List of Gottbegnadeten of Joseph Goebbels, as an important painter of the Third Reich. In 1950, Andri gave all his artworks to St. Pölten, which founded the Ferdinand Andri Museum.

Aus Albanien
By Ferdinand Andri
Located in Roma, IT
Category 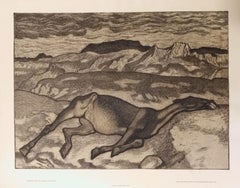 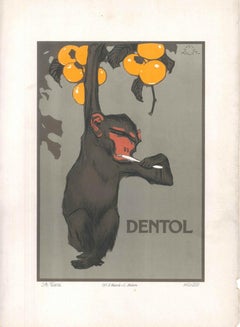 The Tiger - Original Lithograph by Emile Henri Laporte - 1860
Located in Roma, IT
Category