Frances Barth is a noted American artist and teacher born in 1946 in the Bronx. She studied painting at Hunter College and makes abstract paintings and videos and has been the director of the multidisciplinary Graduate school at Maryland Institute College of Art, the Mount Royal School of Art, since 2004. Barth's accomplished paintings are wholly individualistic and other than to say they are radical abstractions, they are eccentric enough to elude classification. Barth refers to aspects of her work as a combination of comic restraint and purist abstraction. Combining contradictory elements of local color with abstract color, vocabularies of both painting and drawing, disorienting spatial relationships, Barth creates works that are as provocatively ambiguous as they are soothingly beautiful. In her desire to tell stories without words, Barth implies narratives and geographies in a realm between landscape, mapping and abstraction. The narratives in the paintings are stories taking place over a period of geological time, with references both topographic and tectonic, alluding to simultaneous multiple histories. The light that Barth creates within her paintings is a spell-binding presence that shifts the picture plane into deep dimensional space at the same time that her compositional shifts in scale destabilize.

Speaking on her use of color the artist refers to her desire to create “big areas of ungracious color, a chemical color that doesn't exist in nature to open up like the sky but not be sky”. She has exhibited her paintings widely in both solo and group exhibitions since the late 1960s, and her work is represented in numerous public, corporate and private collections, including The Museum of Modern Art, The Metropolitan Museum of Art, The Whitney Museum, The Dallas Museum of Art and The Albright Knox Museum.

Frances showed six of her paintings in the 2015 Venice Biennale at the Palazzo Grimani in “Frontiers Reimagined”. Her awards include The National Endowment for the Arts grants in 1974 and 1982, a Guggenheim Fellowship in 1977, the Joan Mitchell Foundation grant in 1995, two American Academy of Arts and Letters Purchase awards in ’99 and ’04, the Anonymous Was a Woman grant in 2006 and the Pollock-Krasner Foundation grant in 2017. Frances is married to the actor and director Ron Nakahara.

She currently lives and works in New Jersey. 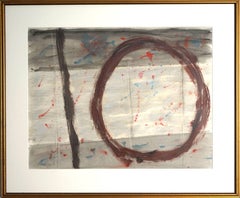