Frederick Colbus was born in Daly City, California, on January 14, 1917. A self-taught artist, Colbus spent his early life in San Francisco. His early passion was to be a cartoonist, working in pen and ink. Colbus was employed by the Walt Disney Company and also drew political cartoons. Together with his wife, Marjorie Ruth Colbus, both working artists, he began a design services company that supplied fine art to Bay Area designers. Frederick and Marjorie worked with commercial interior decorators, mostly in the medium casein milk paint. Later, he settled in Santa Cruz county, where his studio was in Bonny Doon. He died in Santa Cruz in 1986.

Frederick Colbus
Horse in the Forest, circa 1970s 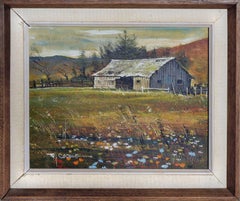 King of the Range
By Bernard Preston Thomas
Located in Soquel, CA
Category