Georges Braque was born in Argenteuil, France, in 1882. Braque lived much of his childhood and young adult life in Le Havre. He attended night classes at the art school from 1897–99 and then moved to Paris, where he obtained his license as a master decorator. From 1905–06, after studying at École des Beaux-Arts in Paris and having been influenced by the works of Henri Matisse, he began to paint in the way of Fauvism by using bright colors and taking advantage of the freedom of the composition. Paysage à L'Estaque (1906) was one of the prominent works of art made at this time.

The year 1907 was a significant time in Braque's development, wherein he visited the retrospective on Paul Cézanne and he came into contact with Picasso, who was very engrossed in the realization of Les Demoiselles d’Avignon at the time. At this point, Braque began nurturing a considerable interest in primitive art. After the First World War, Braque worked autonomously and developed a more personal style, which was characterized by vivid colors and textured surfaces. Braque painted still life, interior views, and ocean scenes. The Ateliers (1948–55) and Birds (1955–63) series were painted during this period. In 1948, he obtained his first award for painting at the XXIV Biennial in Venice. 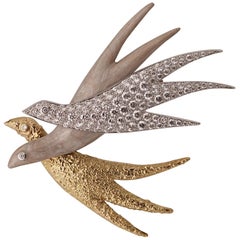 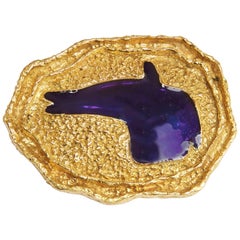 1962 Georges Braque Silver "Circe" Ring
By Georges Braque
Located in Paris, FR
Express Shipping insured during the Lockdown Beautiful Silver ring called "Circe", created by Georges Braque (1882-1963), inventor of cubism, in 1962. It is signed at the back "G. B...
Category 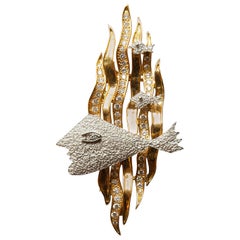