Gieler was born in 1982 in the Netherlands. In the late 90s, he began experimenting with graffiti in Amsterdam. For years Gieler remained active with spraying letters on walls but as he got older, graffiti evolved into street art, where he started to experiment on canvas. The street influences can be recognized strongly in his works, by using a very interesting and distinctive technique where he hand-tears posters from the city and reworks them into his canvases. He can compose unique images on canvas captivating the viewer with the voice of the people and his own. Blending urban elements in a highly intricate way, he creates beautiful compositions that differentiate him from his counterparts. Since 2014, he has been diligently creating this body of work by replicating the captivating beauty of pop icons with his style. As an emerging artist from The Netherlands, his collage works are always being provided with posters he collects from walls out of the streets; he has developed a technique of ”sustainable art" which gives a living and edgy character to his paintings. He also uses other old materials, like damaged brushes, blunt Stanley knives or other older and sometimes broken tools. Since by working with these tools and materials the result is always more surprising and exciting. Gieler can create a completely unusual and powerful body of work by using rebellious and nostalgic plays on icons of the past and present such as Brigitte Bardot, Kate Moss, Elvis Presley and Marilyn Monroe. Working on mostly larger canvases, the presence of these pop pieces make a dramatic statement; but once looking closer at the details, the viewer can discover exciting, rich textures by the many layers of selected hand-pulled posters. Gieler's evolving fascination with the voice of Amsterdam is now expanding to different cities such as London and New York. He aims to include the environments of the world into his pieces by using considerable efforts to bring the two together. His journey through the cities on bicycle leaves him soaking up the backdrop of the streets, which then, later on, translates into the passion he puts into creating his compositions. The result is a refreshing take on pop art that excites the viewer with strong suggestions of color, texture, and design. 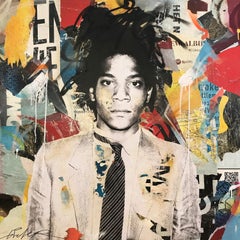 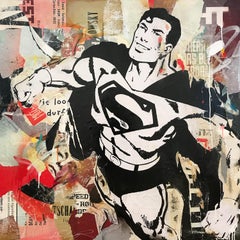 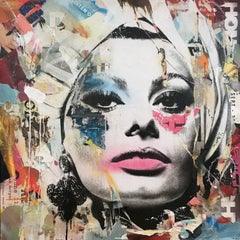 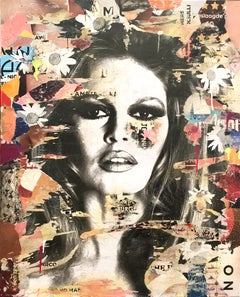 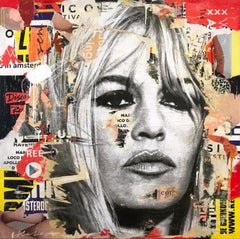 It's a Sin to Be Tired, Pop Art Portrait of Kate Moss
By Gieler
Located in New York, NY
Category

From Nothing to Nowhere (Claudia Schiffer)
By Gieler
Located in New York, NY
Category

Gieler
From Nothing to Nowhere (Claudia Schiffer), 2018

We're Caught in A Trap
By Gieler
Located in New York, NY
Category

It's a Sin to Be Tired, Pop Art Portrait of Kate Moss
By Gieler
Located in New York, NY
Category

We're Caught in A Trap
By Gieler
Located in New York, NY
Category

From Nothing to Nowhere (Claudia Schiffer)
By Gieler
Located in New York, NY
Category

Gieler
From Nothing to Nowhere (Claudia Schiffer), 2018