Born in La Paz, Bolivia, in 1935, Rodo Boulanger creates joyful scenes that depict the pleasure of childhood in a childlike way. Her simplistic, graceful lines and lyrical colors, make her compositions as rhythmic, rigorous and spontaneous as the round-faced children she paints.

Raised in an artistic environment, Rodo Boulanger studied both piano and art as a child. At 22, she decided she must choose one or the other and began to devote all her attention to her art. Four years later, her pursuit of her art took her to Paris, where she still resides. In 1966, Rodo Boulanger's creative efforts began to be recognized with the publication of her first edition of engravings and her first exhibit in the United States.

Since then her work has been shown in more than 150 exhibitions on five continents. In 1979, she was designated by UNICEF as official artist for the International Year of the Child poster and two of her tapestries were presented in the public hall of the U.N. General Assembly that year. 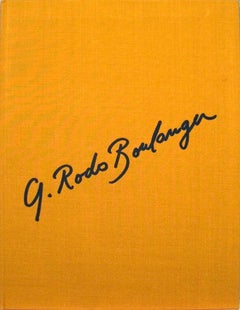 Voyage en Musique (Viaje Musical)
By Graciela Rodo Boulanger
Located in Atlanta, GA
This painting is in excellent condition and has only been shown in a gallery setting. The painting is 31" x 25, and approximately 39" x 32" with frame. A hardbound book is included ...
Category 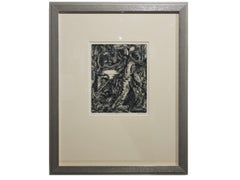 j-m-dunn
"Here She Is" Black and White Abstract Lithograph Edition 1 of 4, 20th Century 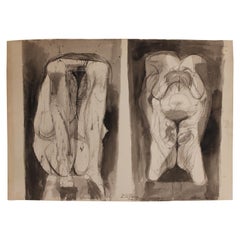