Born in 1945, the Russian artist Grisha Bruskin graduated from the Art Department at the Moscow Textile Institute in 1968. As a member of the Soviet Artists' Union, he staged a number of controversial exhibitions, most of which were closed down by the Soviet authorities. Bruskin immigrated to his current home, New York City, in 1989.

Refusing to adhere to the government-sanctioned style of Socialist Realism, Bruskin became a major figure in the Soviet Non-Conformist Art movement, dedicating himself to the research and presentation of his Jewish heritage and its associated mythologies, mysticism, and sacred texts. Bruskin's work juxtaposes this powerful visual vocabulary of Judaic imagery and text with symbolic remnants of the now dissolved Soviet Union. In Alefbet (1984) and Alefbet-Lexicon (1987), his most reknown painting series, Bruskin combines Hasidic text, figures in religious uniform and a slew of Jewish mystical symbols to produce an image system. Bruskin's prints continue this exploration of the conflict between religious and political mythology, investigating the point of intersection between two prescribed notions of social identity as manifested through tradition, image and text. 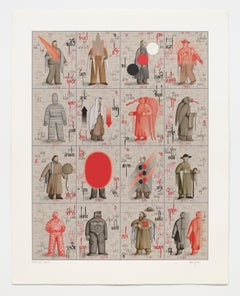 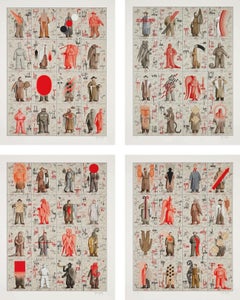 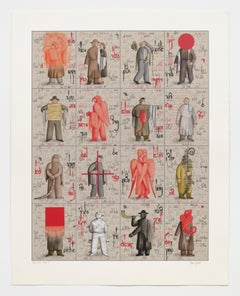 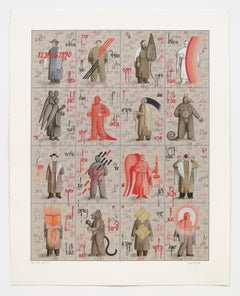 From the Lives of the Saints
By Ronald Brooks Kitaj
Located in New York, NY
Category

Ronald Brooks Kitaj
From the Lives of the Saints, 1975

Go and Get Killed Comrade, We Need a Byron in the Movement
By Ronald Brooks Kitaj
Located in New York, NY
Category

Ronald Brooks Kitaj
Go and Get Killed Comrade, We Need a Byron in the Movement, 1966