Henri Bellery-Desfontaines started as a painter in the atelier of Pierre-Victor Galland, who entrusted him with the decorative motifs that would frame Panthéon de Paris' drawings of Maillot, Bonnat, Humbert and specially Jean-Paul Laurens, who had also later proposed to him to join his atelier in l’École des Beaux-Arts de Paris. With Laurens, Henri Bellery-Desfontaines decorated l'Hôtel de Ville de Paris also known as Le Salon Lobau. Henri Bellery-Desfontaines is thought to have Luc-Olivier Merson as a teacher. During his years as a student, he started to illustrate magazines and books of tales and in 1895, Bellery-Desfontaines opted rapidly for illustration, probably due to financial problems, and he participated in magazines such as L’Image, L’Estampe Moderne or L’Almanach des Bibliophiles. From 1900 on, he gradually evolved toward an ambitious decorative artist, making tapestries and furniture for rich leaders and patrons. Bellery-Desfontaines was an important artist of his epoch, and he took part in numerous events like Bal des Quat'z'Arts or Bal de l'Internat. He also made lots of illustrations such as a joker for the playing cards company Fossorier Amar et Cie, a typography for Fonderie G. Peignot et Fils, or the portraits of Yvette Guilbert, Mounet-Sully, etc. He left a vast artistic production adorned with floral and vegetal motifs and so many unfinished works since he died young from typhoid fever at the age of 42. Recently, the Salon des Artistes Français hosted one of his designs of tapestry. 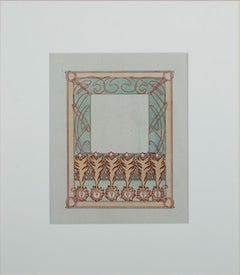 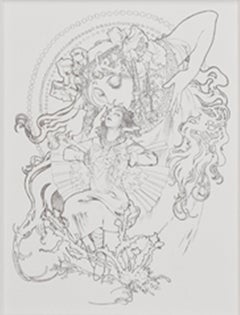 From: Ilsée, Princess of Tripoli Ilsee's Vision, Color Lithograph by A. Mucha
By Alphonse Mucha
Located in Milwaukee, WI
Category