Italo George Botti, an Italian-American contemporary artist and son of Ettore and Filomena Botti, Italian immigrants, was born on March 24, 1923, in Greenwich Village, New York. Attracted to art from an early age, he received a scholarship at the Leonardo da Vinci and Federal School of Art, New York. He furthered his artistic education, by attending the Abracheff School of Art, the Brooklyn Academy of Fine Arts and the Art Student League, in New York, studying under Frank Vincent Dumond, Nicolai Abracheff, Reginald Marsh and Bernard Lamott. Mr. Botti fought with the U.S. Army in World War II and was awarded two Bronze Stars and a Purple Heart. In 1946, he returned from Europe, to teach art at the City College of New York and later, the Art Students League, New York and the Art Institute of Chicago. In addition to his teaching career, he created a large body of work, becoming well-known for his paintings, stained glass, sculpture and mosaic work. 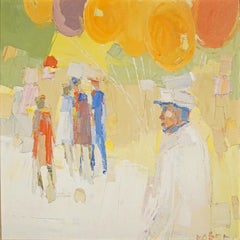 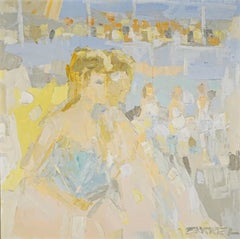 Young Girl Resting in a Bed of Flowers
Located in Sheffield, MA
Category

james-george-weiland
Young Girl Resting in a Bed of Flowers

Outside a Deli
By Jack Levine
Located in Sheffield, MA
Category

A Day at the Beach
Located in Sheffield, MA
Category

leonce-de-joncieres
A Day at the Beach, 1903