As most Venezuelan artists from his generation, Margulis came of age with the rise of Geometric abstractionism and Kinetic art, influenced early on by his encounters with the works of Venezuelan kinetic artist Jesús Soto and Naum Gabo, the Russian constructivist sculptor, specifically through his expsoure to Gabo’s Linear Constructions in Space series, which challenge the construction of volume and space, creating figures with fine threads on a structure. For Margulis, abstraction is the language in which he expects magic to happen, an argot that he masters with ease, where space and its possible construction with the minimum use of materials become one of the playful strategies of his artistic expression. His colorfully sculpted elements emerge as models for his photographic creations, and conversely, each medium coexisting individually, yet dialoguing with the other, creating a variety of discourses based on different perceptions, in an infinite loop in which one agent of expression nurtures and enriches the other. Margulis’ effort has evolved to become a combination of sculpture and photography, creating visual compositions within two different languages and discourses that complement one another.

He has participated in several exhibitions and relevant International Art fairs and his art belongs in private collections in Costa Rica, Mexico, Venezuela, Peru, Italy, Spain, Australia, China, Dubai and the United States.

J. Margulis was born in Caracas, Venezuela. He currently resides and works in Miami, Florida. 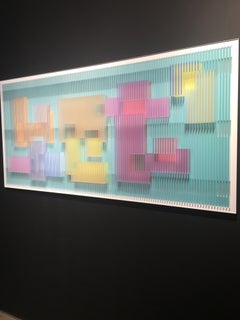 1stDibs offers a wide variety of authentic J. Margulis sculptures for sale. If you’re looking for a way to add color to a neutral corner of your living room or bedroom, you can find work that includes elements of blue, purple and other colors. You may also search for art by J. Margulis in metal, plastic, plexiglass and more by medium. Much of this artist's original work was created during the 21st Century and Contemporary, and is mostly associated with the Abstract style. Not every interior allows for large J. Margulis sculptures, so small editions measuring 10 inches across are available. Customers interested in this artist might also find the work of Sanseviero, Leon Smith and Jose Margulis. On 1stDibs, the price for these items starts at $5,000 and tops out at $5,000, while the average work can sell for $5,000. J. Margulis sculptures prices can differ depending upon medium, time period and other attributes.