Grand Rapids, Michigan, was once known as “Furniture City” for its local mass-production industry that flourished from the mid-19th century into the early 20th century, led by furniture manufacturers like John Stuart. Stuart’s eponymous company, which would build showrooms in New York and Philadelphia, designed and sold elegant reproductions of various furniture styles, including 18th-century French and English furniture as well as what we now call mid-century modern home furnishings built by European craftsmen in the entrepreneur’s Grand Rapids factory.

In 1845, a British cabinetmaker named George Widdicomb arrived in New York before moving to Grand Rapids. There he set up a small cabinet shop in 1857 with a dozen craftsmen, including his son John Widdicomb. The store quickly found success due to Widdicomb’s English training and the dearth of other quality furniture makers in the region. Toward the end of the 19th century, Grand Rapids had earned an international reputation as a leader of American furniture manufacturing, and while the Widdicomb family would navigate some difficulty after the Civil War, they emerged anew as Widdicomb Brothers and Richards, and then the Widdicomb Furniture Company. Widdicomb’s son started his own company in 1897, the John Widdicomb Company, and in 1929, the Grand Rapids–born John Stuart joined the company as a director.

Stuart, who had been in the furniture industry since 1913, was named president of John Widdicomb Company in the early 1940s and by then had formed John Stuart, Inc., with partner Herbert M. Rothschild. John Stuart, Inc.’s offerings included oak buffets and other dining-room furnishings crafted in the Tudor and Elizabethan styles, with cabinet doors and drawer fronts characterized by meticulously carved natural-world motifs and other decorative flourishes. Stuart also oversaw the design of reproductions of sophisticated walnut and mahogany Queen Anne side tables and dining chairs, with the latter marked by pronounced, vase-shaped curves in the back splats and cabriole legs. In 1952, the manufacturer and distributor’s founder sold the business, including the right to trade under his name, to the John Widdicomb Company. 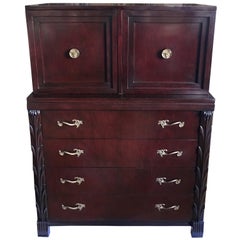 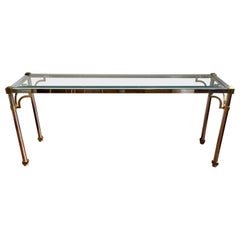 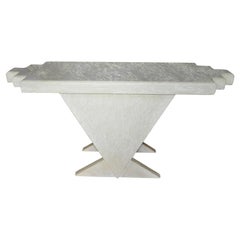