Joline Butler Smith, who lived most of his life in Madison, Connecticut, was a landscape and portrait painter. He attended the first class of Yale School of Art (1869–70) and served as librarian at the school from 1877 to 1878. In 1887, he studied at the Atelier of Gérôme and Académie Julian in Paris and exhibited, in that same year, a painting entitled Going Home at the National Academy of Design in New York City. Smith was associated for several years with the Tiffany Glass Company in New York City, where two windows painted by him entitled Autumn and Spring were loaned by Tiffany and exhibited at the Architectural League of New York, also in 1887. Additional Tiffany commissions were the Davenport Group and three south windows in Center Church, New Haven, as well as new churches in New York City and elsewhere in the United States.

Smith exhibited sketches at the Kit Kat Club, New York City, with posters by Will H. Bradley in 1896, and maintained an art glass studio at 149 Orange St., New Haven, for designing and painting stained-glass windows from 1898 to 1916. Local glass commissions include First Methodist Church, St. Paul's Church and the chapel at Evergreen Cemetery, New Haven; Congregation Church, West Winsted and others. From 1902 to 1906 he served as an assistant in Illustration and Decorative Design, Yale School of Art, with John F. Weir and John Niemeyer. Engaged in landscape, portrait painting and stained-glass window design, Smith was a member of the New Haven Paint and Clay Club and exhibited at its charter exhibition in 1900. He exhibited there 12 additional times until 1921. Smith was also a member of the Acorn Club. Studies at historical archives in Madison have revealed that he also drew sketches of an historical home, the Thomas Wilcox Homestead in what was then East Guilford, Connecticut. Although unsigned, accompanying written documents prove the sketch to be by his hand. A handwritten note explains how Smith tore down the house and used the lumber to build a new one, which was bought by the Shoreline Universalist Church as their meetinghouse in 1968. 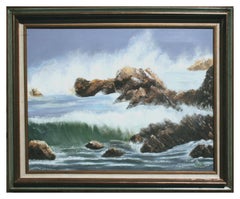 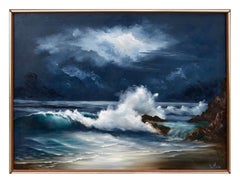 Seascape with Flock of Ducks
Located in Soquel, CA
Category

The Other Side of the Fence
By Genevieve Rogers
Located in Soquel, CA
Category

Genevieve Rogers
The Other Side of the Fence, 1960s