Leila McConnell was born in 1927 in Los Angeles, California. Her family moved to Houston when she was six and, after graduating from high school, she enrolled at Rice Institute (now Rice University). At the time, Rice had no department of architecture but McConnell sought inspiration from iconic professor James Chillman. After earning her BA from Rice, she continued her art studies at the Museum School (now Glassell School) at the Museum of Fine Arts, Houston. In the summer of 1949, she attended the San Francisco School of Fine Arts and was fortunate to study under Mark Rothko. After her classes with Rothko, she began to paint more abstract pieces. In 1956 she married fellow artist Henri Gadbois.

Realizing that she had a vivid imagination, McConnell embarked on a trip to Europe in 1960. The stucco buildings of Italy greatly impacted her vision and caused a change in her paintings. Her colors became soft and blended, often misty and portraying a sun or moon, causing the artist to deem many of her works “sky paintings.” In 1976, McConnell began creating paper collages, a diversion from her painted works. Although small, her collages impacted the way McConnell created her paintings — her edges became harder, mixed with the mistiness of her skies, and her compositions became more symmetrical. McConnell continues to paint in her unique style and develop her oeuvre of “sky” pieces. 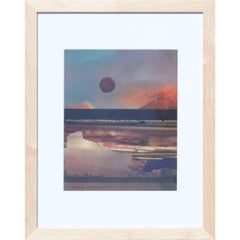 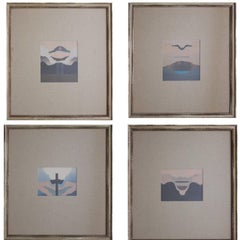 Previously Available Items
"Sun and Moon" Contemporary Minimal Abstract Painting
By Leila McConnell
Located in Houston, TX
Minimal contemporary abstract painting of a sun and a moon suspended in a blue space. The work is signed and dated by the artist in the bottom corner of the canvas. The work is frame...
Category

H 9.5 in. W 11 in. D .5 in.
Leila McConnell- Abstract Red Painting
By Leila McConnell
Located in Houston, TX
Abstract painting of diffused yellows, oranges, and reds with a blue line crossing through it by Leila McConnell from 1970. Signed and dated by artist. Artist Biography: Leila McCo...
Category

1stDibs offers a wide variety of authentic Leila McConnell art for sale. You can also browse art by Leila McConnell in paper, magazine paper, oil paint and more. Much of this artist's original work was created during the 1970s and is mostly associated with the abstract style. Not every interior allows for large Leila McConnell art, so small editions measuring 15.5 inches across are available. Customers who are interested in this artist might also find the work of Daisy Clarke, McKie Trotter and Ellen Hart. On 1stDibs, the price for these items starts at US$1,500 and tops out at US$6,500 while the average work can sell for US$6,000.