Nazzareno Cipriani, the Italian artist, studied in Rome and worked at the studio of the Neapolitan painter Achille Vertunni, alongside the painters Pietro Barucci and Pio Joris, devoting himself to historical and biblical subjects. Cipriani began exposing Venetian and Roman landscapes and scenes of genre and popular life. In 1870, at the Roman exhibition of Amateurs and Cultures, he presented A Nun Who Watered the Flowers. Attracted by the pictorial and more chromatic complexity of Mariano Fortuny, Cipriani also adopted the technique of tempera and watercolor. Cipriani also lived in the era of orientalist painting and for this, he traveled to countries in northern Africa, drawing inspiration for odalisques and dark, veiled and richly bejeweled women. He had his studio in Via Margutta, next to another orientalist, Enrico Tarenghi. In 1875, Cipriani was among the ten founders of the Roman Watercolor Association, with whom he participated in exhibitions until 1913. Cipriani sent his watercolors to the Paris Exhibition of 1878. In Rome, he was present at the National Exhibition of 1883 with L'Addio of the bride and the exhibitions of the group In art libertas of 1901 and 1902. Cipriani took part in London at exhibitions of the Royal Academy and in Rome, he became a member of the Academy of San Luca.

Related Items
View of Sankt Moritz - Original Watercolor on paper by H. B. Wieland - 1900/1920
By Hans Beat Wieland
Located in Roma, IT
Category 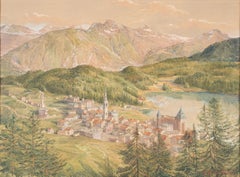 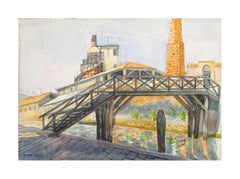 View Of Aetna From Taormina - Original Watercolor on Cardboard
By Thomas Charles Leeson Rowbotham
Located in Roma, IT
Category

Bay of Naples 1857 - Original Watercolor and White Lead on Paper
By Thomas Charles Leeson Rowbotham
Located in Roma, IT
Category

San Giovanni and Minerva Temple - Original China Ink Drawing by A. Terzi - 1899
By Aleardo Terzi
Located in Roma, IT
Category

Santa Maria Maggiore and Coliseu - Original China Ink Drawing by A. Terzi - 1899
By Aleardo Terzi
Located in Roma, IT
Category

Nazzareno Cipriani
A lady waiting for a gondolier at the entrance to the Palazzo Rizzini, Venice