Born on August 12, 1912, Nikolai Timkov began his studies at Rostov-on-Don Art Technikum between 1927–31. He continued his studies at the Institute of Painting, Sculpture and Architecture in Moscow from 1933–39. The artist was active in Moscow from 1930–33, thereafter, he relocated to Leningrad, where he spent the majority of his career. Timkov has had an extensive history of exhibitions throughout the Soviet Union including the prestigious All-Union Art exhibition, Moscow in 1955 and the Soviet Russia exhibition, Moscow in 1960. Timkov was one of the more noted Russian painters of the 20th century. Though trained in the academic tradition of Russian Realism at the Academy of Arts, Timkov developed his unique style characterized by impressionist brushwork and fresh compositional solutions. His works hang in all major Russian museums, including the State Russian Museum in St. Petersburg and the Tretyakov State Gallery in Moscow. Timkov died on December 25, 1993, in Saint Petersburg, Russia.

Nikolai Timkov Russian Artist Oil on Board, 1968, “The Kremlin”

The Kremlin at Rostov by Nicolai Timkov
By Nikolai Timkov
Located in Pasadena, CA
Painted in 1969 at the height of Timkov's ability, this painting depicts the Kremlin in Rostov, one of Timko's favorite, non-landscape subjects. Signed and dated onthe reverse and si...
Category

The Kremlin at Rostov by Nicolai Timkov 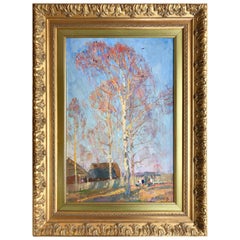 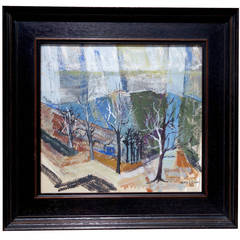 Landscape Painting of Ouray, CO circa 1915

H 18 in. W 23.5 in.
"Winter Twilight" Painting by Russian Artist Nikolai Timkov
By Nikolai Timkov
Located in Boulder, CO
Nikolai Efimovich Timkov is one of the greatest Russian landscape painters of the second half of the 20th century using impressionism to capture his subject. He began his formal trai...
Category