Though he was born in Switzerland, photographer Robert Frank’s greatest legacy was his representation of places and figures across the United States, the bulk of which was published in a seminal book titled The Americans.

Frank emigrated to America in 1948, settling in New York City, where he was hired as a fashion photographer for Harper’s Bazaar by the magazine’s legendary art director Alexey Brodovitch, who also recruited Lisette Model, Richard Avedon and mid-century-era style-setting couple Leslie Gill and Frances McLaughlin-Gill. Frank’s artistic style — and use of a 35mm Leica, an unconventional choice in the fashion world — proved not to be a fit, however, and he left the job after a few months. He went on to produce street photography around the city while working freelance jobs for the likes of Vogue, Life and other publications.

But it was leaving New York that would produce Frank’s most notable work. Throughout the 1950s, with the support of a Guggenheim Fellowship and guidance from Walker Evans, he embarked on a series of cross-country road trips, traversing nearly every state in the continental U.S. and producing a wealth of arresting photographs of its inhabitants. The black-and-white images pioneered what became known as a “snapshot aesthetic,” capturing a spontaneous moment. Subjects are often out of focus and rarely looking toward the camera, and rippled fabric or bent grasses often suggest movement and breeze.

After an initial publication in France, where the photographs appear alongside essays, The Americans was released in the U.S. in 1959 with a foreword by author Jack Kerouac, who espoused Frank’s ability to capture a uniquely American spirit.

“That crazy feeling in America,” Kerouac wrote, “when the sun is hot and music comes out of the jukebox or from a nearby funeral, that’s what Robert Frank has captured in tremendous photographs taken as he traveled on the road around practically forty-eight states in an old used car.”

Following the release of The Americans, Frank turned much of his attention to film. He would go on to produce a film version of Kerouac’s The Beat Generation and cofounded the New American Cinema Group in 1960. He died in 2019. 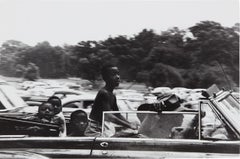 Biker in a Mirror Black and White Photograph Gravure Print by Burk Uzzle, 1980

H 1 in. W 9 in. D 9 in.
Eadward Muybridge Animal Locomotion Plate 369 HelioGravure Black White Print
By Eadweard Muybridge
Located in Brooklyn, NY
Eadward Muybridge is one of the most fascinating figures in the history of photography. Born in England, he moved to the US at the age of 20, becoming a successful bookseller in San ...
Category

1stDibs offers a wide variety of authentic Robert Frank art for sale. You can also search for art by Robert Frank in silver gelatin print and more by medium. Not every interior allows for large Robert Frank art, so small editions measuring 11 inches across are available. Customers who are interested in this artist might also find the work of Jose Luis Beltran Gras, Edward Curtis and Phil Stern. On 1stDibs, the price for these items starts at $50,000 and tops out at $70,000, while the average work can sell for $60,000. .