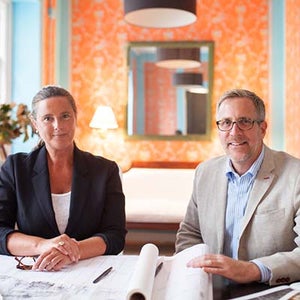 Bill Brockschmidt and Courtney Coleman bring to their work a focus on traditional detailing, proportion, materials, and craftsmanship in both architectural elements and in furnishings. Whether designing a stylish library in a Park Avenue duplex or specifying traditional slipcover details for a Vieux Carre carriage house, the two emphasize appropriateness and clarity in their work, bringing a modern sensibility to historical references. The two formed Brockschmidt & Coleman, LLC, in February of 2001. From their offices in the Flatiron District of Manhattan and in the Garden District of New Orleans, their teams manage projects in New York and the Northeast, the Mid-Atlantic, and throughout the South, as well as Bermuda, Sicily, and Croatia. Their work has been featured in Elle Decor, House Beautiful, Architectural Digest, Traditional Home, Quest, Period Homes, The Classicist, The New York Observer, and on HGTV.