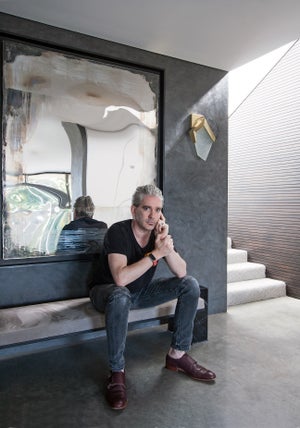 Our team has been hand picked and specially trained to provide efficient and artistic design solutions that are individually tailored to each client. We believe that every client has a unique creative 'fingerprint', and this individuality should be expressed imaginatively in each completed project.

Dylan calls this a "narrative style" of design; a "nebulous, detail-driven approach that each time creates a space or object that best exemplifies and reflects the persons who live with or within it."

Our goal is not to inflict a singular style upon our clients. Rather we have created a practice, both aesthetic and logistical, that elevates the client's unique personal vision via our vast knowledge of trade resources, period styles, age-old and contemporary fabrication processes, and general edified technical training. The resulting designs are always dynamic, honest, personalised, and free of contrived tricks or short-cuts.

Dylan Farrell is an award winning designer who is internationally recognised as a leader in the field of the applied arts. His career has so far been split, initially launching in New York where he was born and raised, and since practicing from his centre of operations in Sydney, Australia. He was trained at the world renown Pratt Institute in Brooklyn, New York, where he subsequently served as a professor of interior design.

Before launching his namesake firm, he was consultant to a who's-who of art and design, working alongside several American design icons on widely recognised projects. His individual and collaborative works have been published in Architectural Digest, Architectural Record, Belle, Elle Decor, The Financial Review, The Hollywood Reporter, Interior Design, Interiors, New York Spaces, Veranda, and Vogue Living.

Dylan is also the creative force behind a collection of couture furnishings designed exclusively for the international brand Jean de Merry.