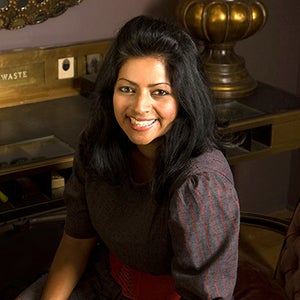 From the finest showrooms in Paris to the hidden gems of eBay, Interior Designer Kishani Perera relies on a multitude of resources to create beautiful spaces that have seemingly evolved over decades rather than months. This ability to blend the reclaimed with refined, the ordinary with ornamental, has attracted a loyal following who have come to depend on her imagination and inventive use of resources to cultivate homes that are both chic and livable.\n\n\n\nKnown for her unique vision and innovative approach, magazines such as In Style, Angeleno, House Beautiful, Town and Country, California Home and Design and People have also been drawn to her cosmopolitan flair and passion for bygone eras. Not only has her work and expertise as both a designer and style maker been featured in countless publications, this UCLA grad was even approached by American Express to represent both their company and hers in a national ad campaign. Kishani’s love for design and all things vintage even inspired the birth of her very own retail boutique, Rummage. Showcasing her edgy and all embracing aesthetic, Rummage is a carefully collected group of both antique and custom pieces which illustrate her design philosophy and spirit. Most recently, a vibrant coffee table book of Kishani’s work, entitled Vintage Remix, was released by Abrams, featuring an introduction and forward by Molly Sims and Gary Oldman, respectively.\n\n\n\nWhen not collaborating with her eclectic group of clients, or indulging her workaholic tendencies, Kishani can be found rocking out to anything from world to punk, indie to oldies, scavenging for hidden treasures, baking up vegan delights, and wandering the town with her pugs daydreaming about her next adventure.