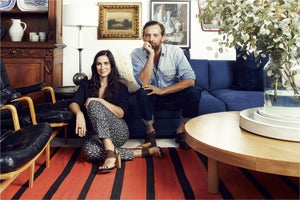 Together they helm a versatile, Los Angeles design studio and boutique, which houses their growing handmade furniture collection, alongside vintage pieces + home accessories, sourced the world over. These hunter-gatherers of good taste, populate their storefront with an ever-changing array of eclectic objects and thoughtful wares.

Todd has crafted retail spaces for brands like, Ralph Lauren and Theory, while Amy hails from the refined world of hospitality at Starwood Hotels.

A chance introduction in New York City, in 1999, sparked their endearing friendship. Having independently relocated to Los Angeles, the two later found each other, reuniting to form their namesake design brand in 2004.

The Nickey Kehoe aesthetic is rooted in a broad spectrum of experiences, and elevated by a spirit of inclusion and warmth, that’s informed yet approachable.

The two pride themselves, not on being the writers of the story, but rather, the editors – with each space defined by its owners’ individual perspective, manifesting in pared down, imaginative environments that are thoughtful, personal, and quietly clever.