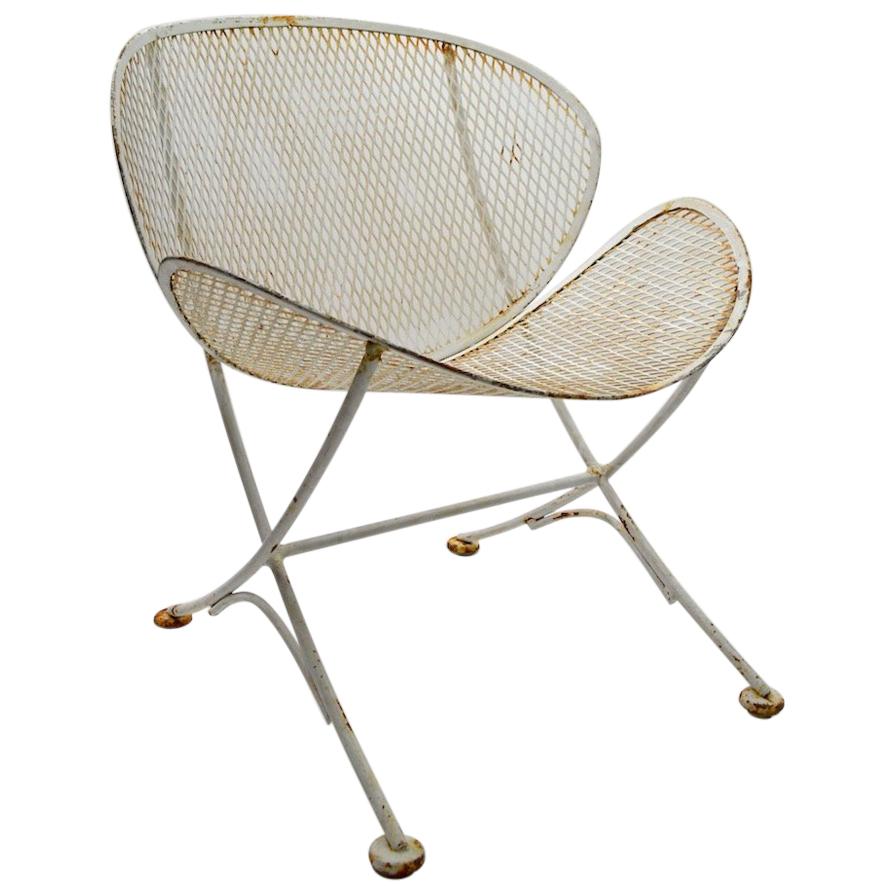 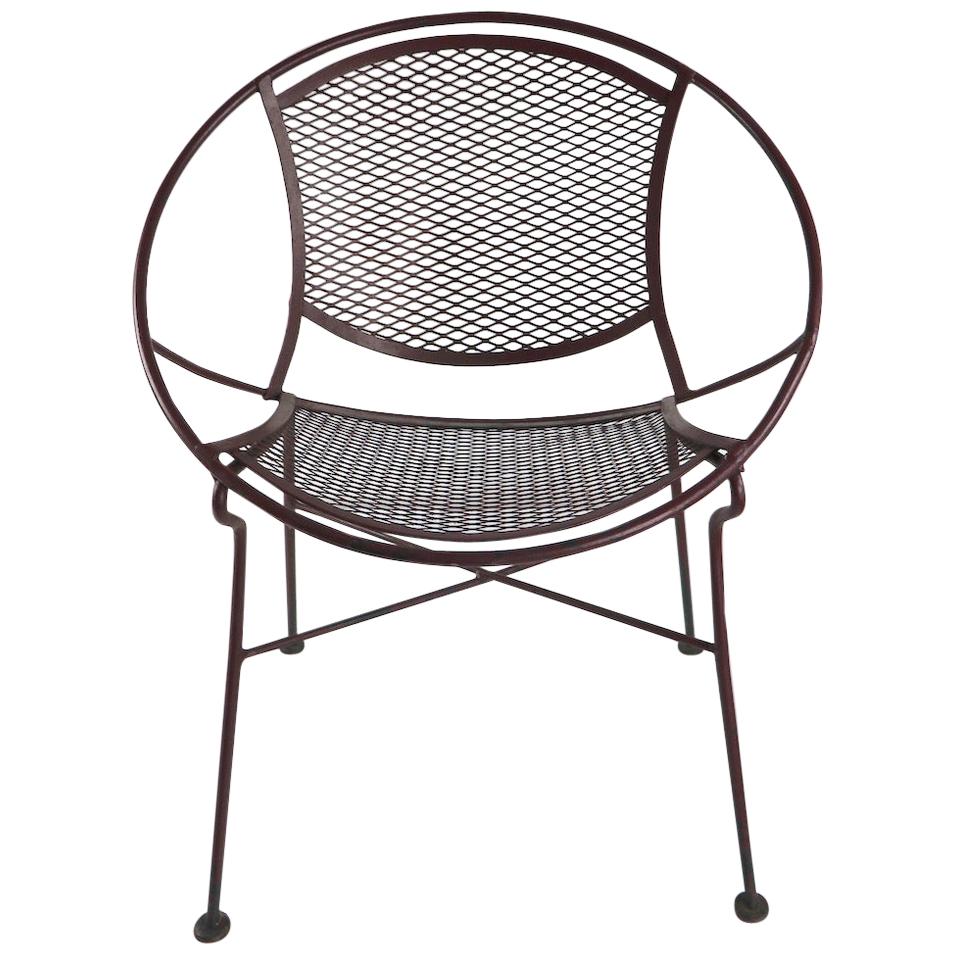 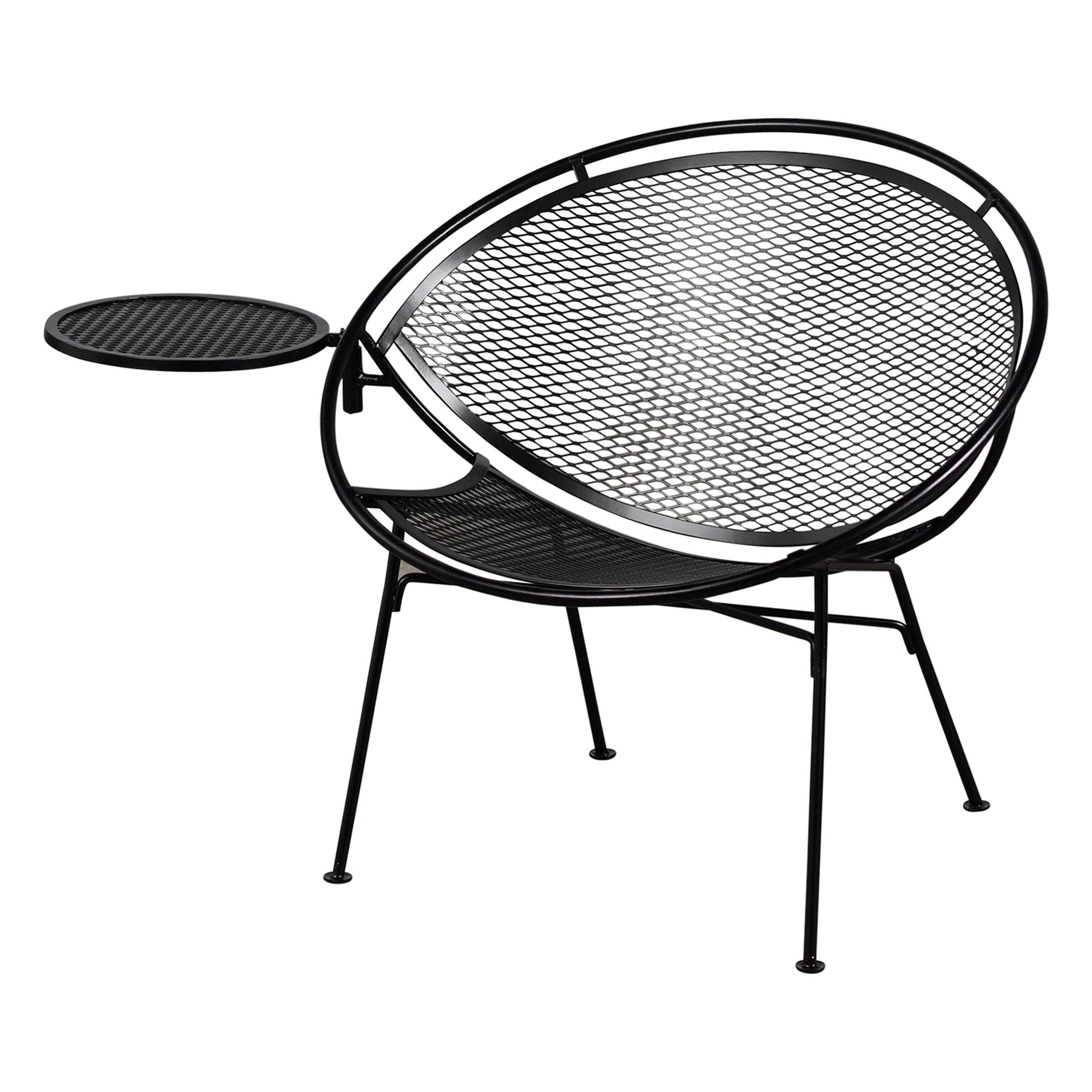 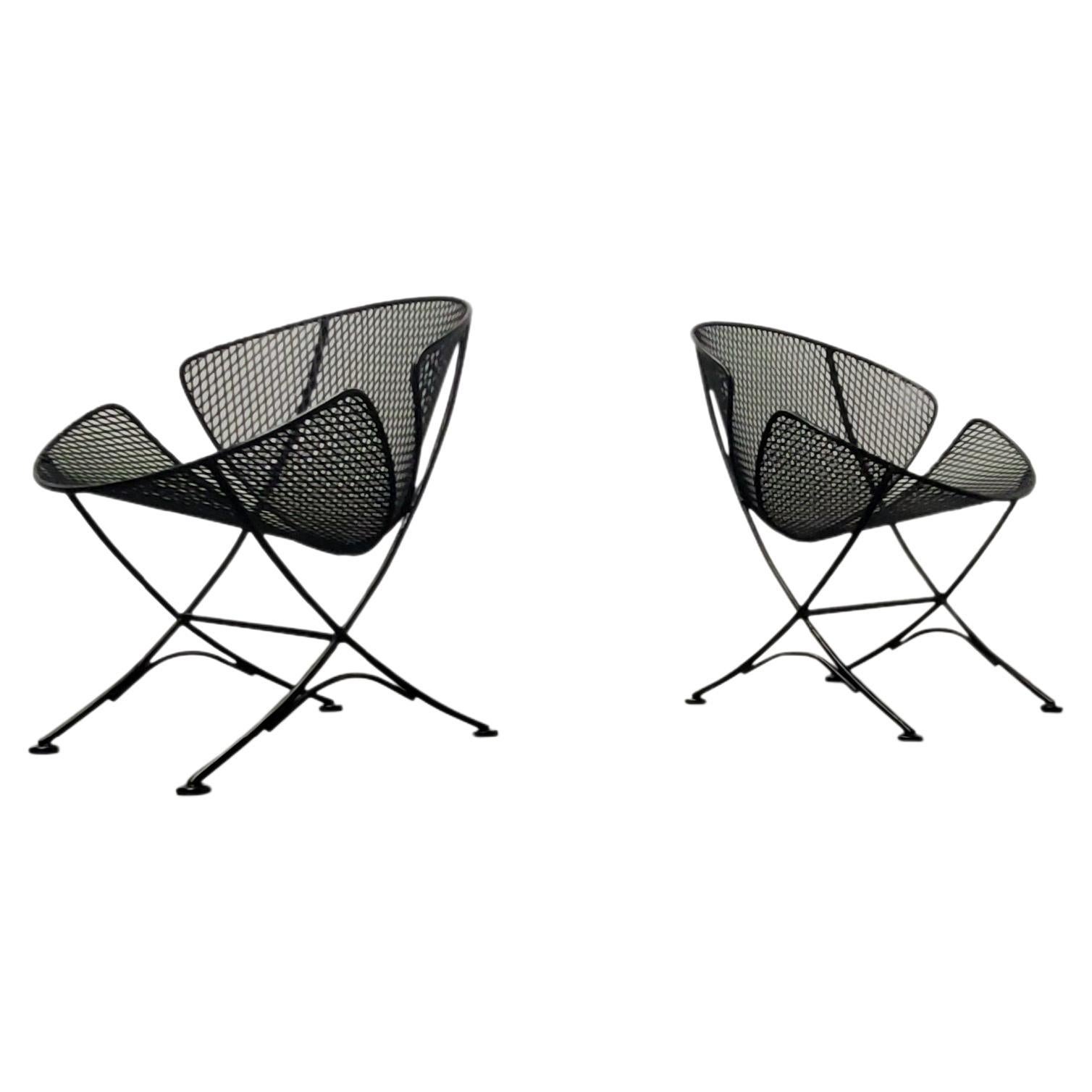 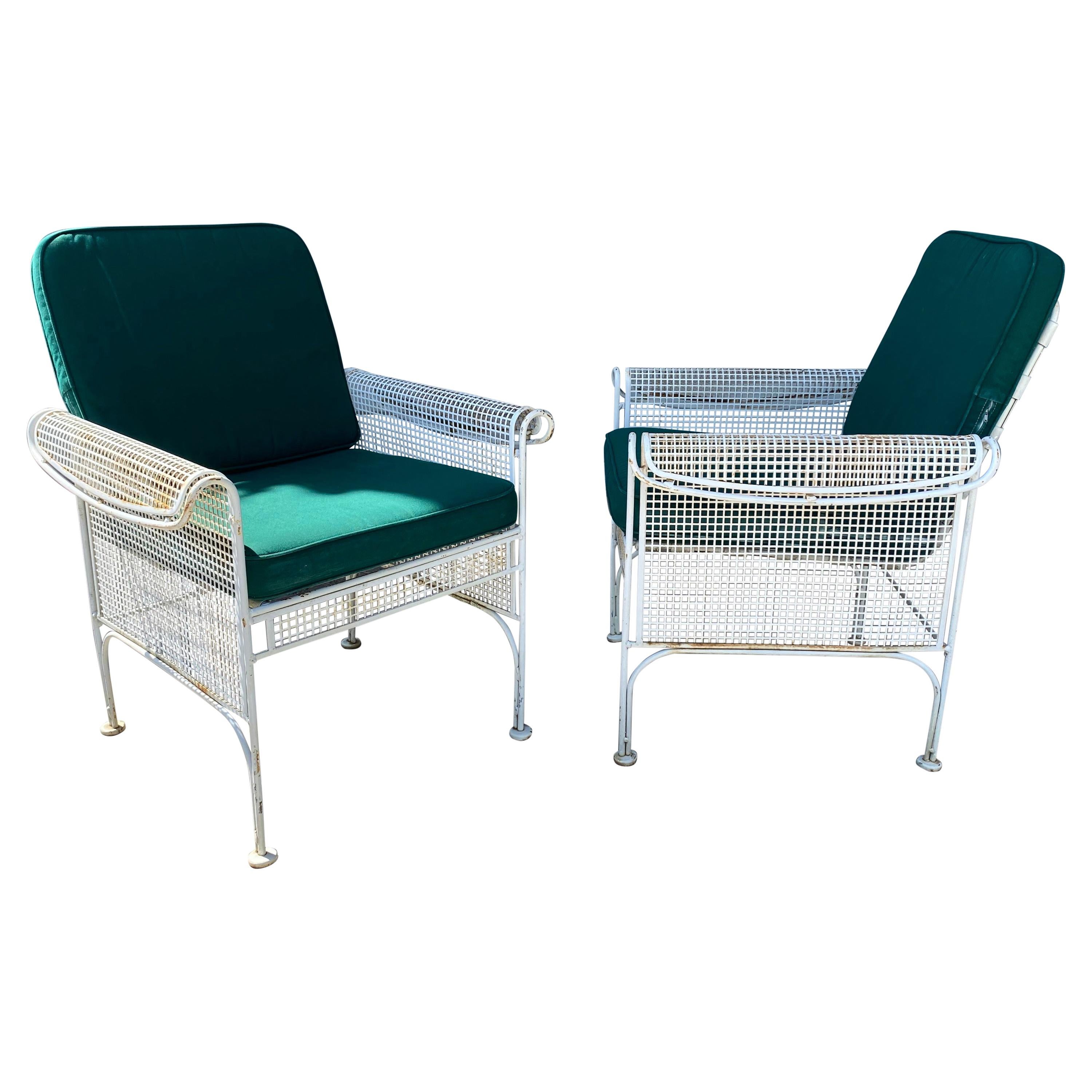 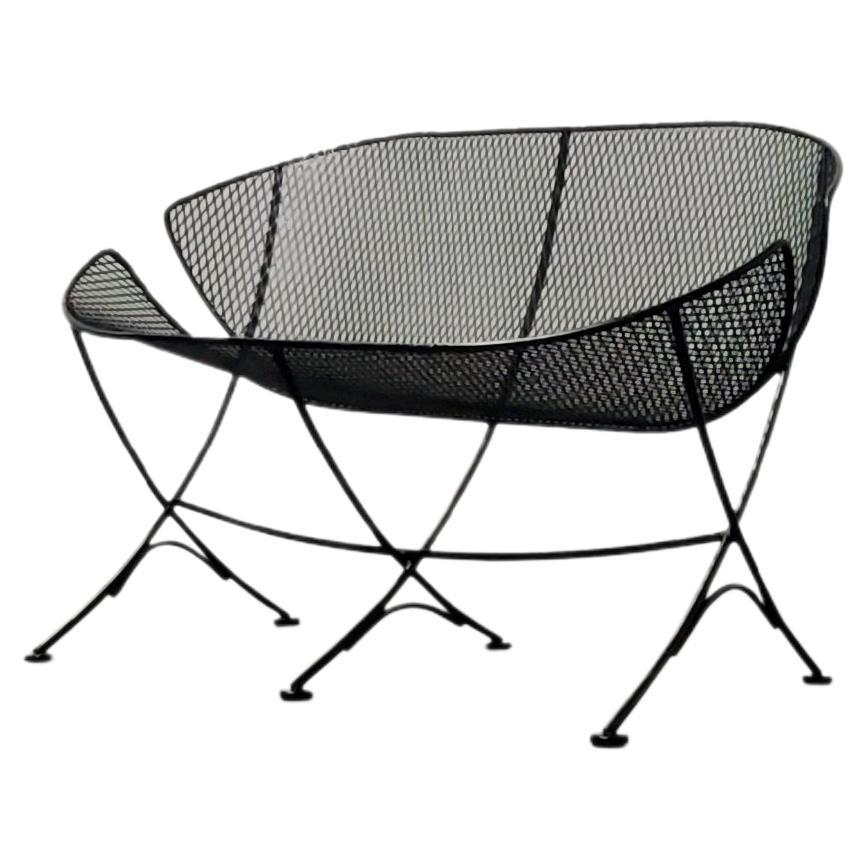 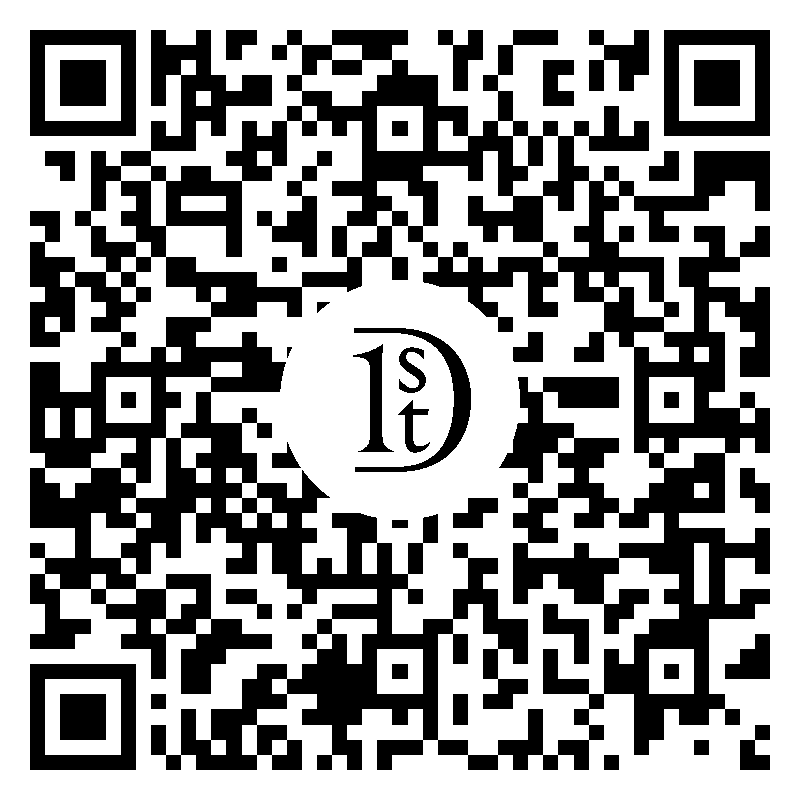 Pair of outdoor clam shell lounge chairs designed by Maurizio Tempestini and manufactured Salterini can be used on the terrace, patio, porch or in the garden. These chairs are all-iron outdoor chairs having great capacity seating without taking up a lot of room. Very comfortable. Great original paint, showing losses but retaining its great character and charm. Arm height: 20 inches; seat depth is 17". 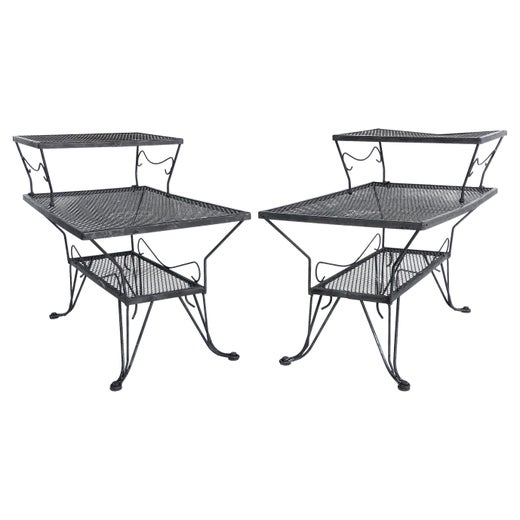 Italian architect and furniture designer Maurizio Tempestini is well-known among vintage outdoor furniture aficionados for his sculptural Clamshell line and other elegant mid-century modern furnishings for patios and gardens.

Born in Florence in 1908, Tempestini completed his studies in Industrial Decoration at the Porta Romana Art Institute in 1929. His career as an interior architect and furniture and lighting designer flourished during the early 1930s. It was during this time Tempestini was also active as a set designer for several Italian theater productions, including Mario Massa’s Osteria degli immortali and Luigi Bonelli’s comedy Il Gigli.

Tempestini then turned his attention from the stage to designing furniture and decorative objects. He crafted pieces for ceramics factory Cantagalli in Florence, as well as for Murano glass manufacturers Seguso and Cappellin.

In 1934, Tempestini worked on the external renovation of the Palazzo delle Esposizioni at the Parterre di San Gallo in Florence for the Littoriali Exhibition. Later, in 1938, he formed a studio with architects Nello Baroni and Pietro Porcinai before cofounding the legendary postwar Italian lighting maker Arteluce with designer and engineer Gino Sarfatti in 1939.

During the 1950s, Tempestini designed lighting fixtures for Lightolier and began to collaborate with Brooklyn, New York’s John B. Salterini Company. Salterini was an Italian emigree who initially worked in journalism before becoming an eminent producer of high-end wrought-iron furniture.

Tempestini’s modernist outdoor furniture for Salterini resembled indoor seating manufactured by the likes of Knoll or Artifort — his chairs and other seating boasted organic curves and seductive, unconventional shapes. His work complemented Salterini’s own handmade designs, which reflected Gothic Revival and Art Deco influences. Together the designers produced successful lines of garden and patio furniture for Salterini’s eponymous firm.

Tempestini’s name soon became widely known in the United States. His designs were first introduced to the American public in 1951 through Gimbels Department Store and Suniland Furniture in Houston, Texas. Today his bold and stylish patio furniture remains sought after by collectors everywhere.

About the Seller
4.9
Located in Great Barrington, MA
Platinum Seller
These expertly vetted sellers are 1stDibs' most experienced sellers and are rated highest by our customers.
Established in 2000
1stDibs seller since 2007
890 sales on 1stDibs
Typical response time: <1 hour
More From This Seller

Tempestini for Salterini High Back Lounge with Footrest