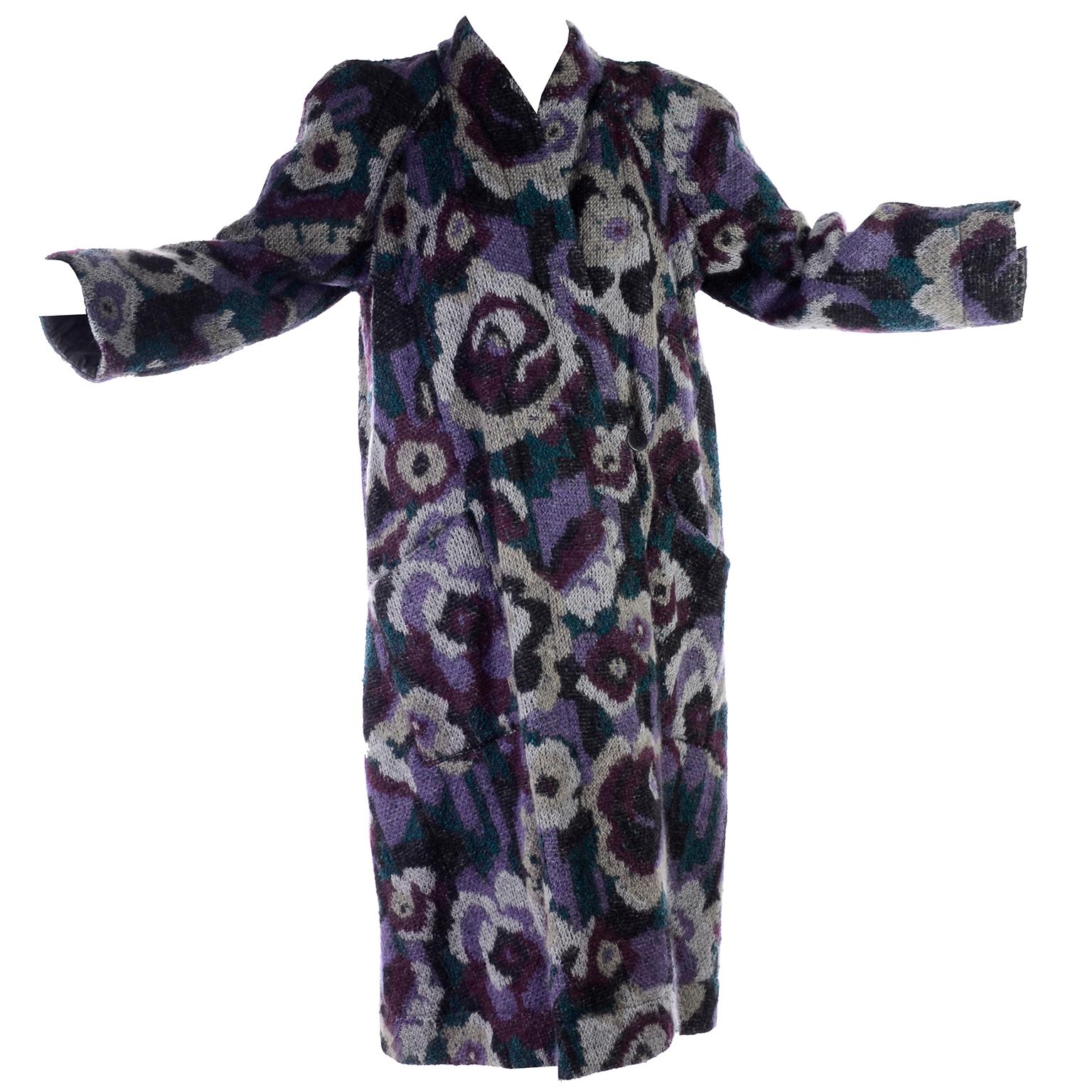 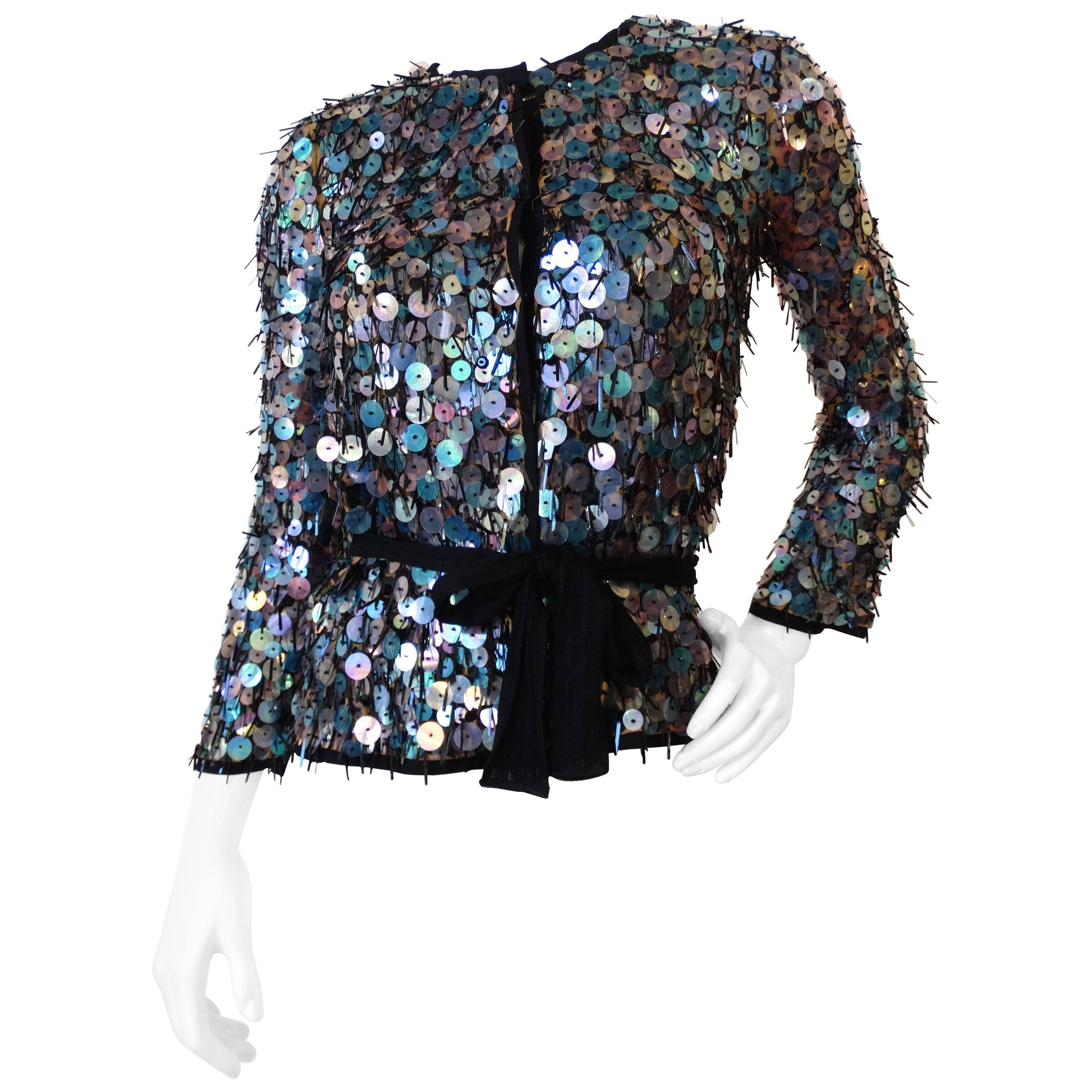 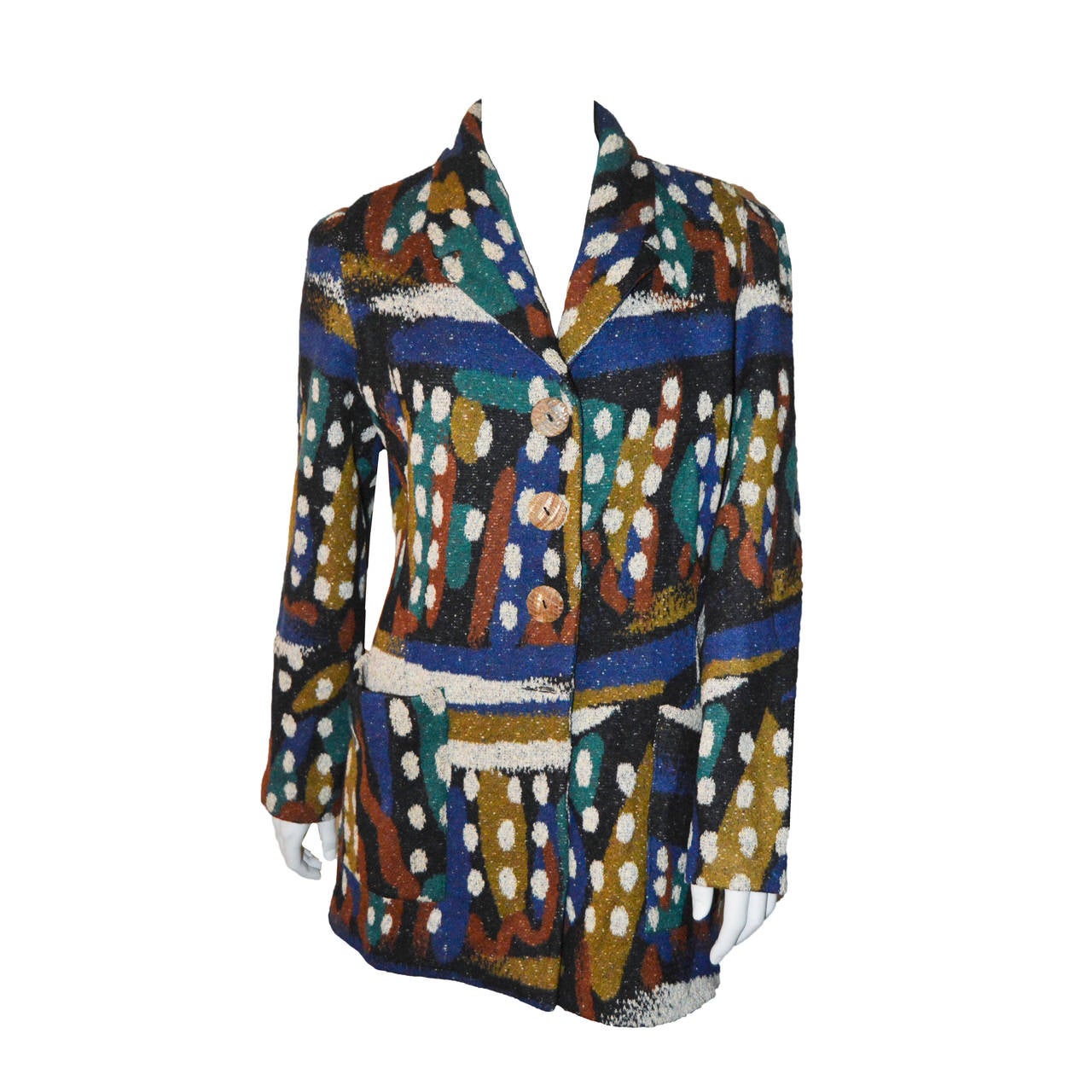 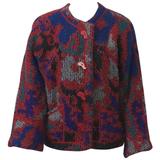 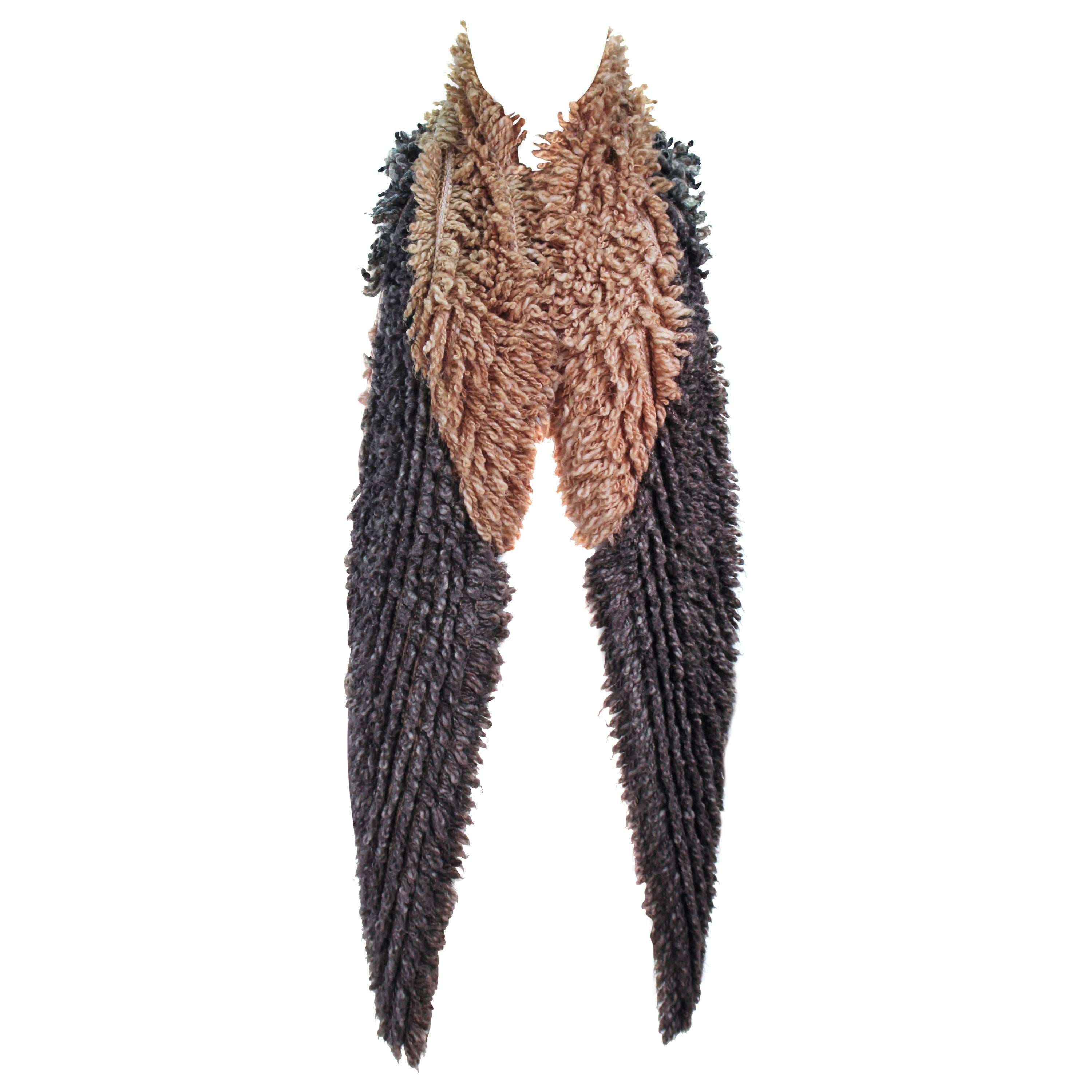 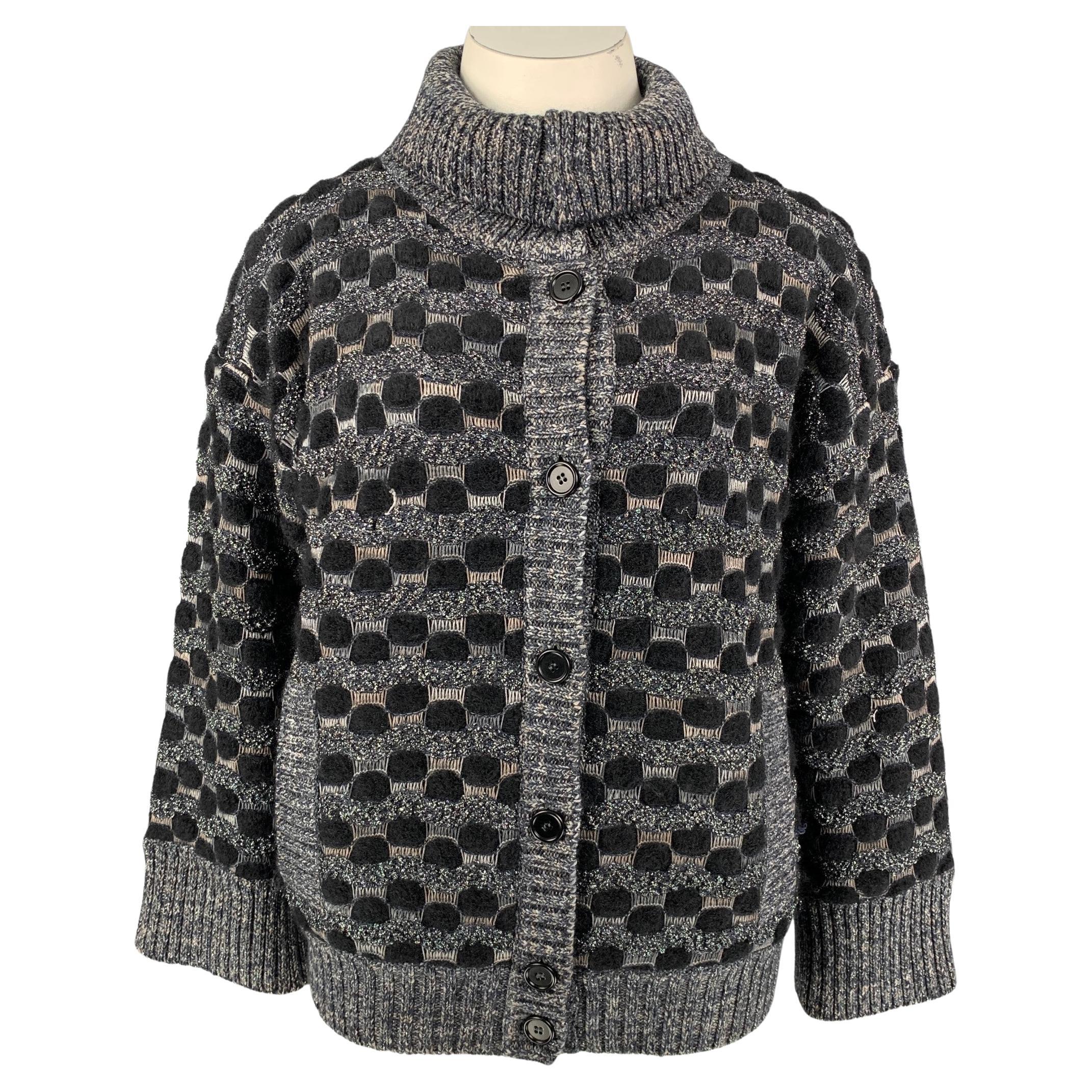 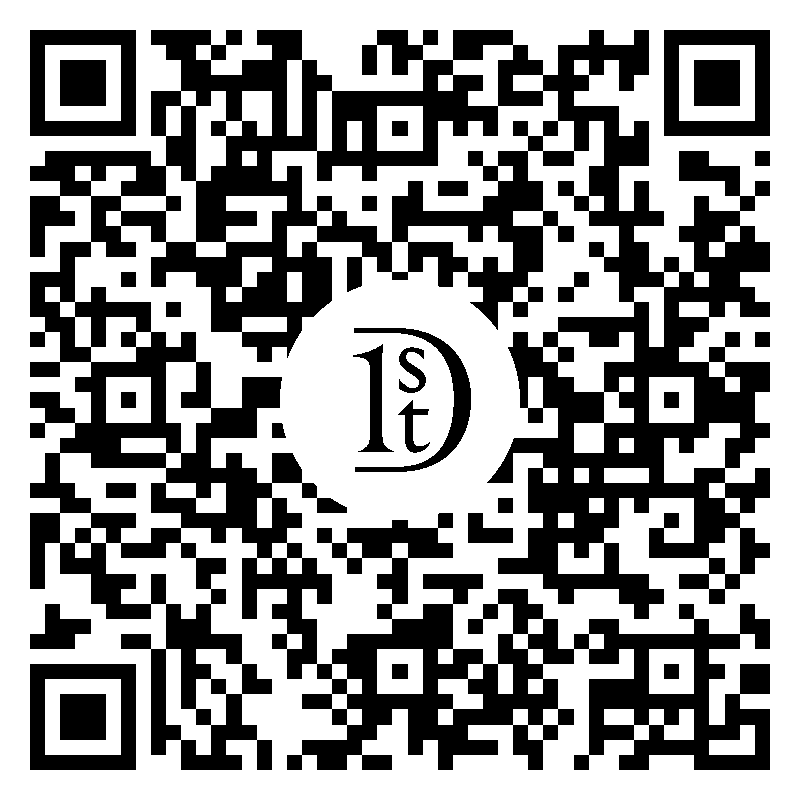 Give it up for the most amazing vintage Missoni coat! From the 1980's, in great condition, this is ready for a new home. This highly textured and ultra-plush coat will get you through the fall and winter like a breeze! To create a highly stylized outfit make sure you are mixing textures. This will be sure to make you look lux and expensive! The exterior of this coat has a boucle texture, an orange, tan, and black pattern, and a button closure. This coat is long and oversized with large sleeves and will be so cozy! Take a peek on the interior where you can see a durable nylon printed fabric with two interior pockets to hold your necessities. Pair this awesome coat with a Chanel knit dress, some chunky Prada boots, and some silver Yves Saint Laurent earrings. Length: 52 inches Bust: 50 inches Hips: 54 inches Arm: 26 inches Waist: 50 inches 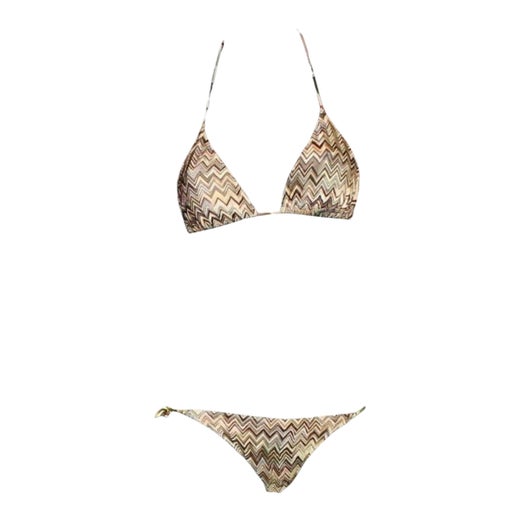 Missoni began with a tracksuit, which featured zippers down the legs because, as Rosita recalls it, “Tai was too lazy to take off his shoes when putting them on.” The couple’s fashion really took off, though, once they discovered the Raschel knitting machine on a trip to a shawl factory. The machine enabled the Missonis to knit multiple colors in a zigzag pattern, a motif that would go on to become synonymous with the Missoni brand across everything from its alluring vintage day dresses and sweaters to its purses, seating and rugs.

Missoni held its first fashion show in Florence in 1967 and caused a bit of a sensation when the models’ Lurex dresses proved translucent under the lights at the Pitti Palace. Scandal aside, the show went down in history as a hit, and the Missonis soon made their debut in the United States with the help of legendary fashion editor Diana Vreeland, who gave the variegated Missoni stripe the Vogue seal of approval, saying, “Who says a rainbow has seven colors? It has many shades.” (It was also Vreeland who reportedly introduced the Missonis to Neiman Marcus president Stanley Marcus, effectively shepherding the brand to the American market.)

Missoni’s many-shaded rainbow would soon become an emblem of the 1970s fashion scene, earning the brand a permanent place in the fashion canon. In 1973, the New York Times proclaimed: “Missoni’s weaved garments have ended up universal materialistic trifles, as Vuitton sacks and Gucci shoes.”

The brand branched into the home market in 1983, with Rosita overseeing this new venture, which included furniture, textiles and accessories. Daughter Angela succeeded her mother at the helm of the brand, where she still serves as president and creative director today; her brother Luca is CEO, while her daughter Margherita is creative director of offshoot M Missoni.

1stDibs Buyer Protection Guaranteed
If your item arrives not as described, we’ll work with you and the seller to make it right. Learn More
About the Seller
4.9
Located in Scottsdale, AZ
Vetted Seller
These experienced sellers undergo a comprehensive evaluation by our team of in-house experts.
Established in 2009
1stDibs seller since 2015
809 sales on 1stDibs
Typical response time: 7 hours
More From This SellerView All
People Also Browsed
You May Also Like