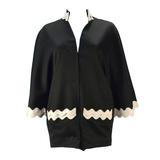 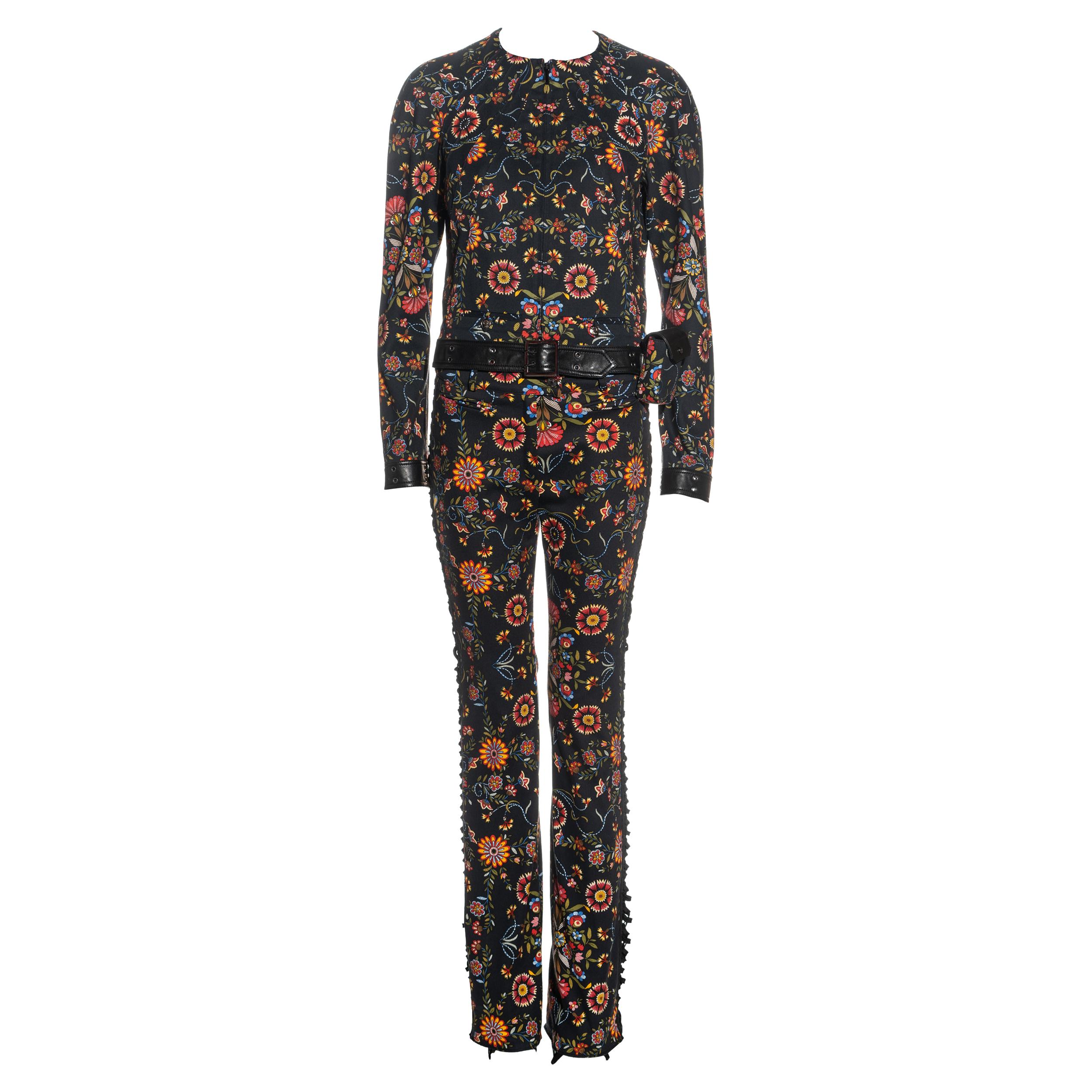 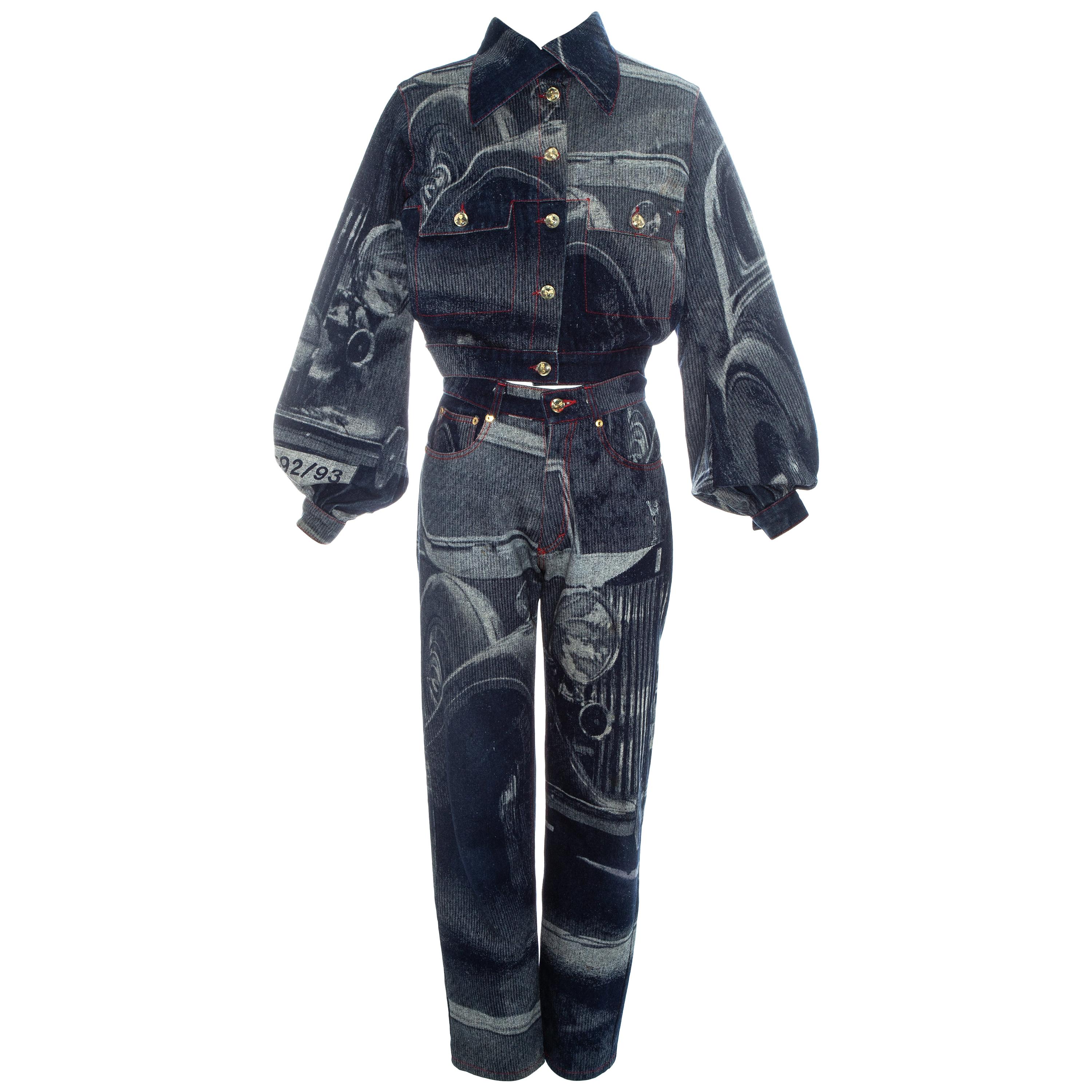 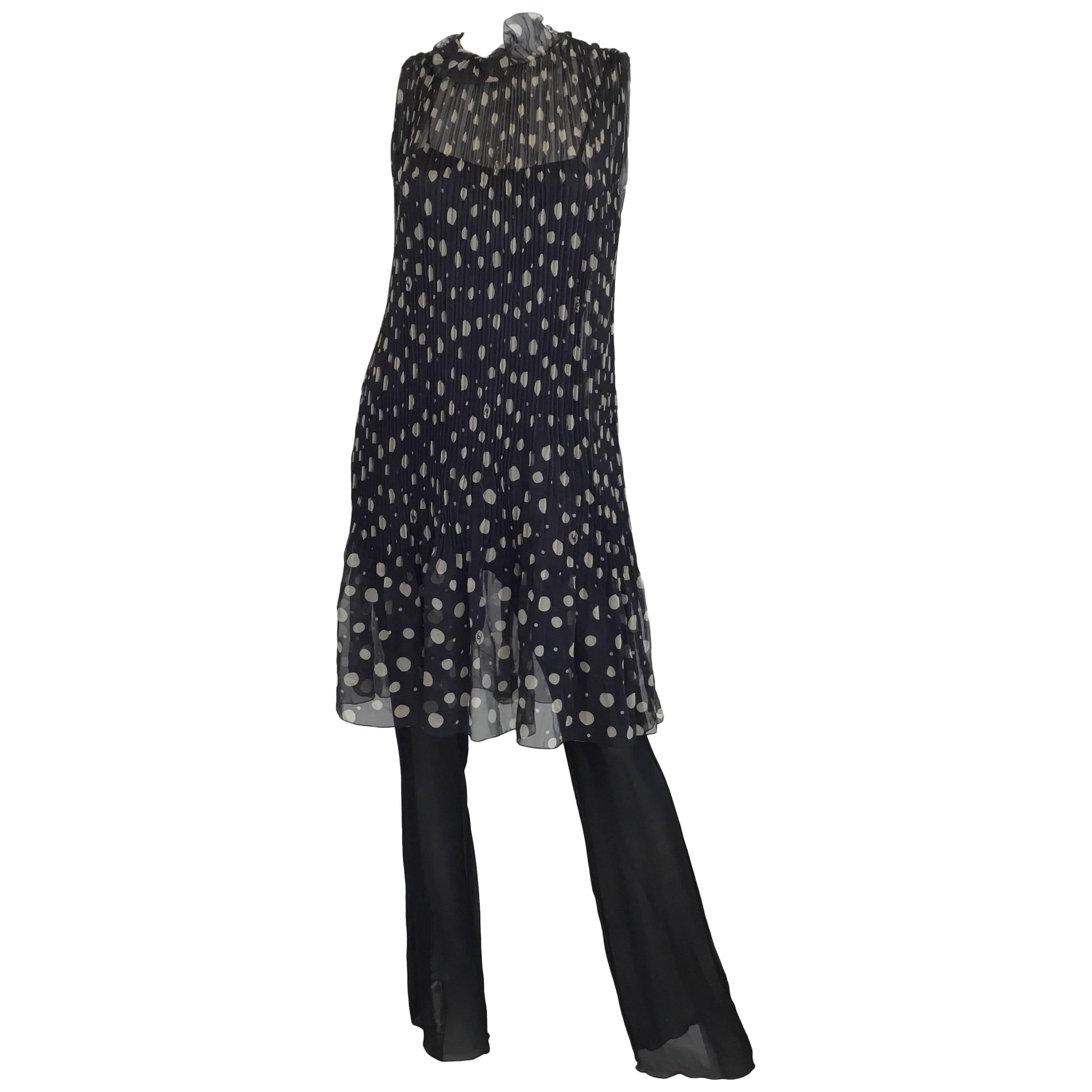 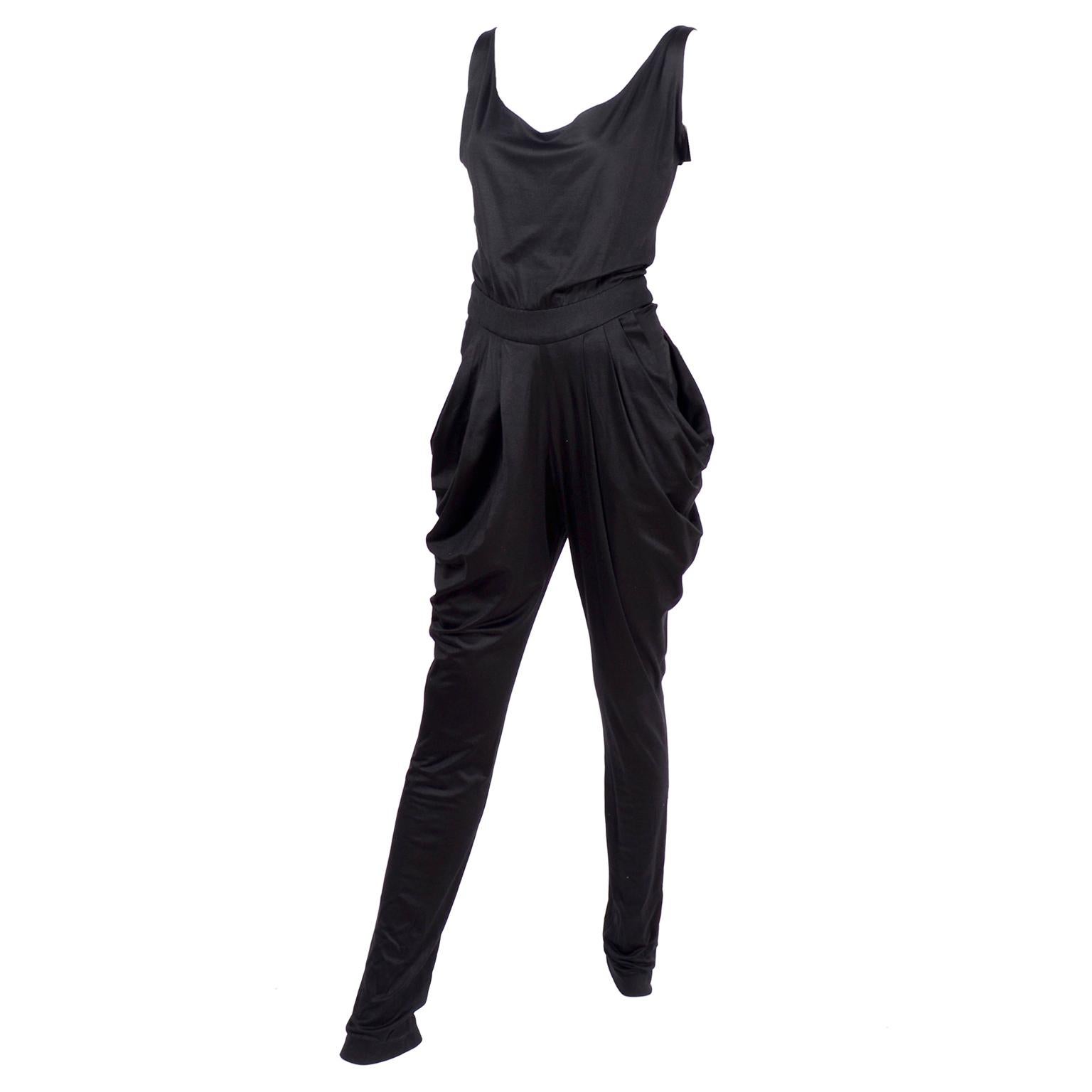 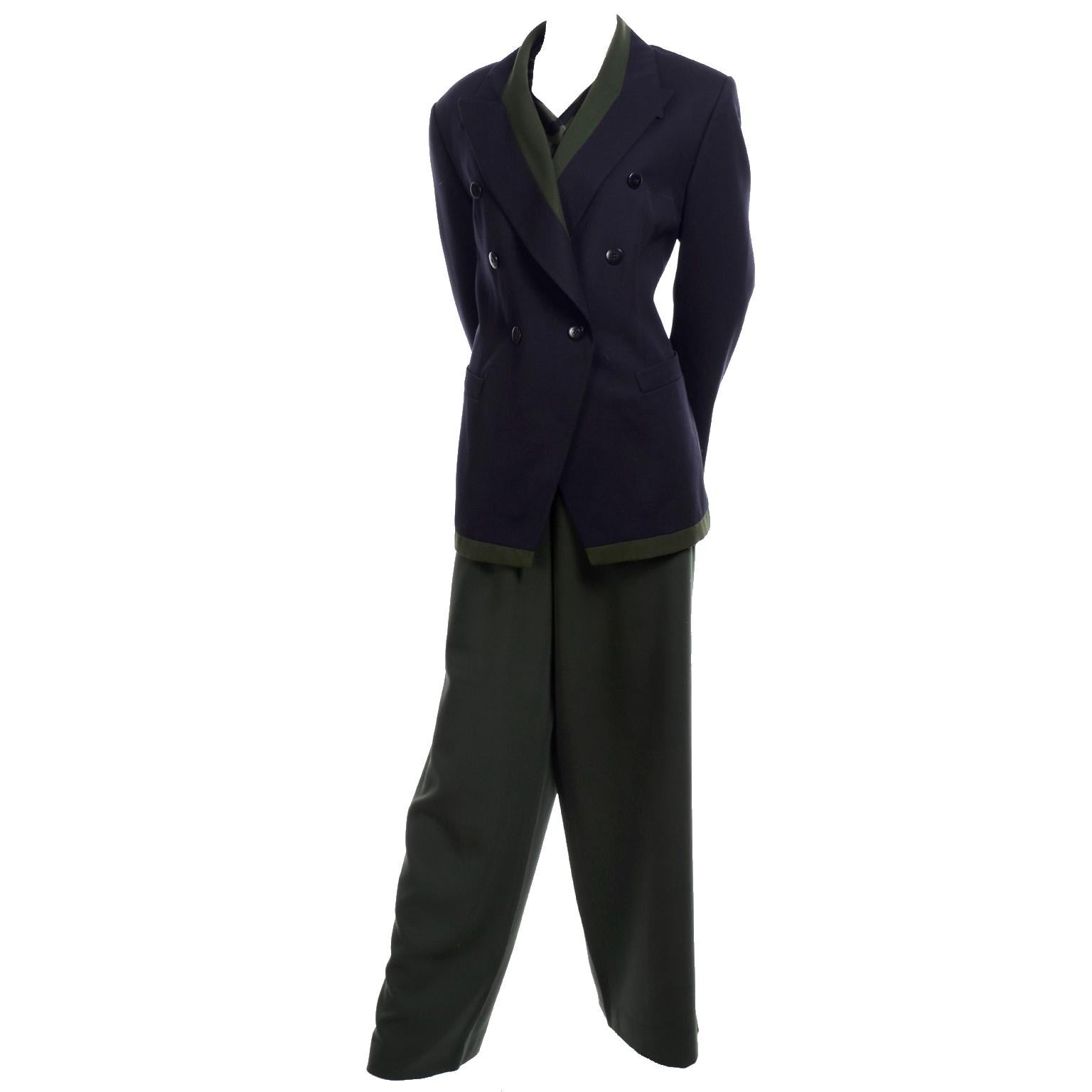 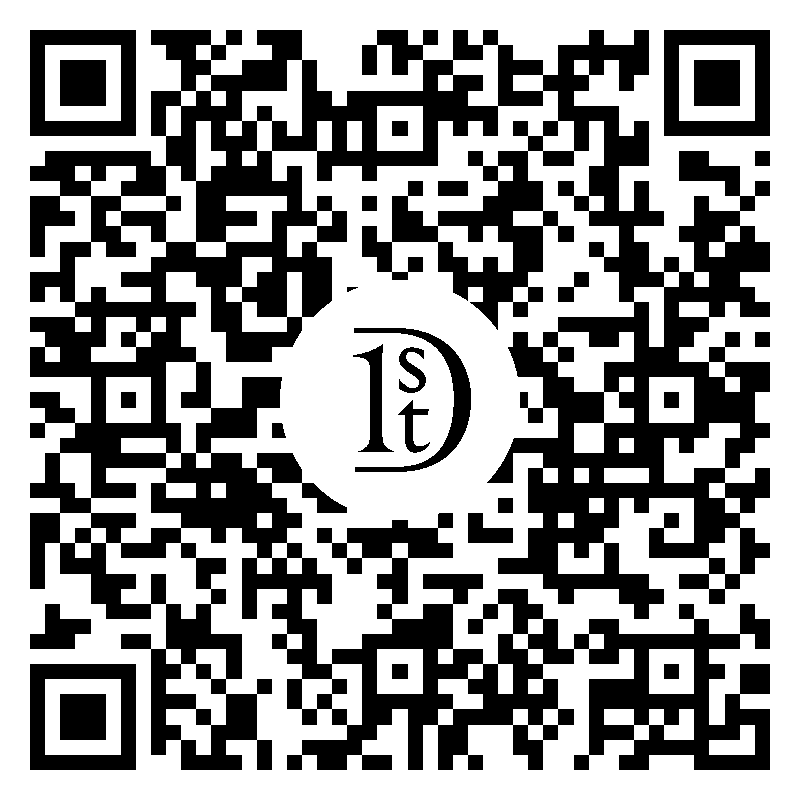 We are obsessed with this spectacular vintage 1970's Pierre Cardin charcoal grey wool vest top set with wide leg pants. This outfit can be worn with a top underneath or with a simple bandeau as we are showing on our model. The sleeveless top has wide open sides, which makes it fit and look more like a vest. The top has a v-neck and a waistband with a faux button closure that is secured with 3 metal snaps. The high waisted pants have a double hook and eye closure in the center front opening with a metal zipper. The front and back of the pants have flattering darts along the waistband that turn into a dramatic box pleat, which give the pants a lot of volume and interest. This beautiful Pierre Cardin pantsuit has union made labels, meaning it was made in the USA of 100% Wool. Originally sold at Saks Fifth Avenue and has labels sewn into the waistband. This set does not have a size label, but we estimate this would best fit a modern size 4. Please review the measurements provided for the most accurate fit. TOP: BUST (LAYING FLAT): 13 1/2" across the front WAIST: 30" SLEEVE OPENING: 15" SHOULDERS: 15 1/2" LENGTH FROM SHOULDER: 17" PANTS: WAIST: 26" HIPS: 40" RISE: 14" INSEAM: 28 1/2" LEG WIDTH: 18 1/2" 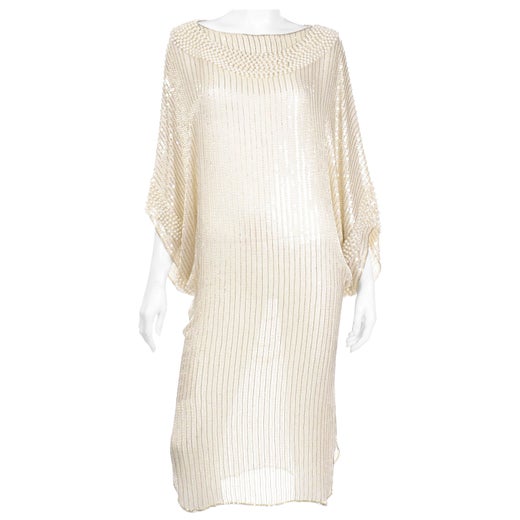 Best known for creating groundbreaking fashion designs from the 1950s onward, Pierre Cardin enjoyed great success in other design fields, most notably furniture. Cardin’s chairs, cabinets, tables and other pieces share many of the keynotes of his clothing designs. They are simple, geometric, elegant and cool.Cardin was born in a village near Venice, Italy, and raised in central France. Always interested in fashion, he left home at age 17 to train with a Vichy tailor. After the end of World War II, Cardin moved to Paris and worked for a succession of couture houses, before taking a job with Christian Dior in 1946. Cardin went solo in 1950, and quickly won attention for his novel style. Unlike Dior’s famous New Look, Cardin’s clothes de-emphasized a woman’s curves; his breakthrough pieces like the Bubble dress had, instead, a sculptural quality. In the following decade, Cardin introduced bright tunic dresses and shifts, marketed as the Space Age look and accessorized with vinyl hats and visors.In the 1970s Cardin expanded his design work into furniture, jewelry and automobiles. (Later, licensing agreements would put Cardin’s name on goods ranging from perfume to sunglasses.) Cardin’s furniture pieces — inspired, perhaps, by the rediscovery of Art Deco design in that decade — feature simple, symmetrical forms, lacquer and figured veneer finishes, and accents in metals such as aluminum and brass. Whether you are looking for a vintage cocktail dress or a chest of drawers to keep it in, as you will see on 1stDibs, Pierre Cardin offers an option in either that is timelessly chic.
About the Seller
4.9 / 5
Located in Portland, OR
Platinum Seller
These expertly vetted sellers are 1stDibs' most experienced sellers and are rated highest by our customers.
Established in 2001
1stDibs seller since 2015
1,222 sales on 1stDibs
Typical response time: 1 hour
More From This Seller

$16,011
Chanel Chiffon Polka Dot Dress and Jumpsuit, 2000
By Chanel
Located in Carmel by the Sea, CA
Chanel set features a pleated silk blouse/tunic with a bib collar and button closures on the shoulder and a silk black jumpsuit under layer that has a zipper fastening. Set also incl...
Category