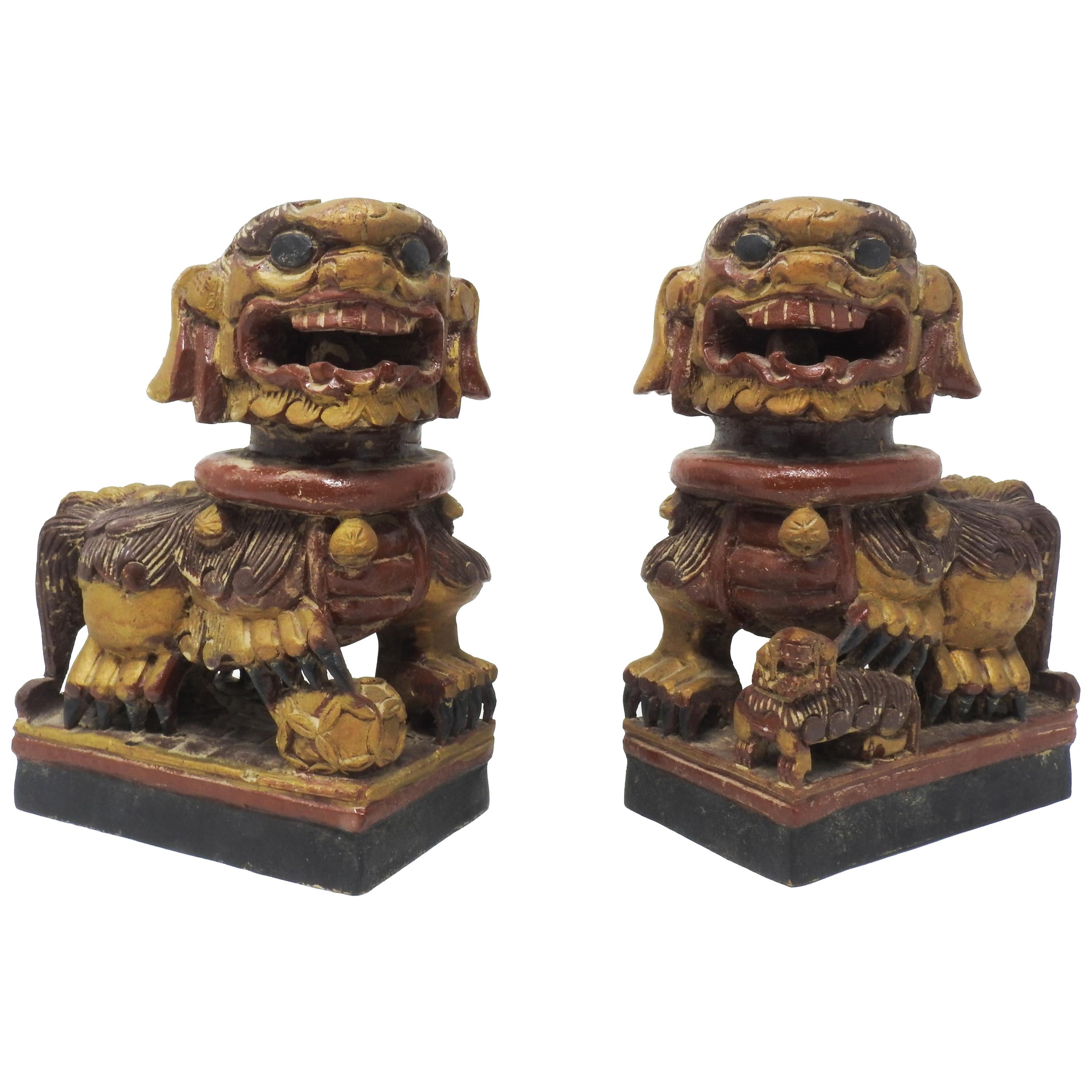 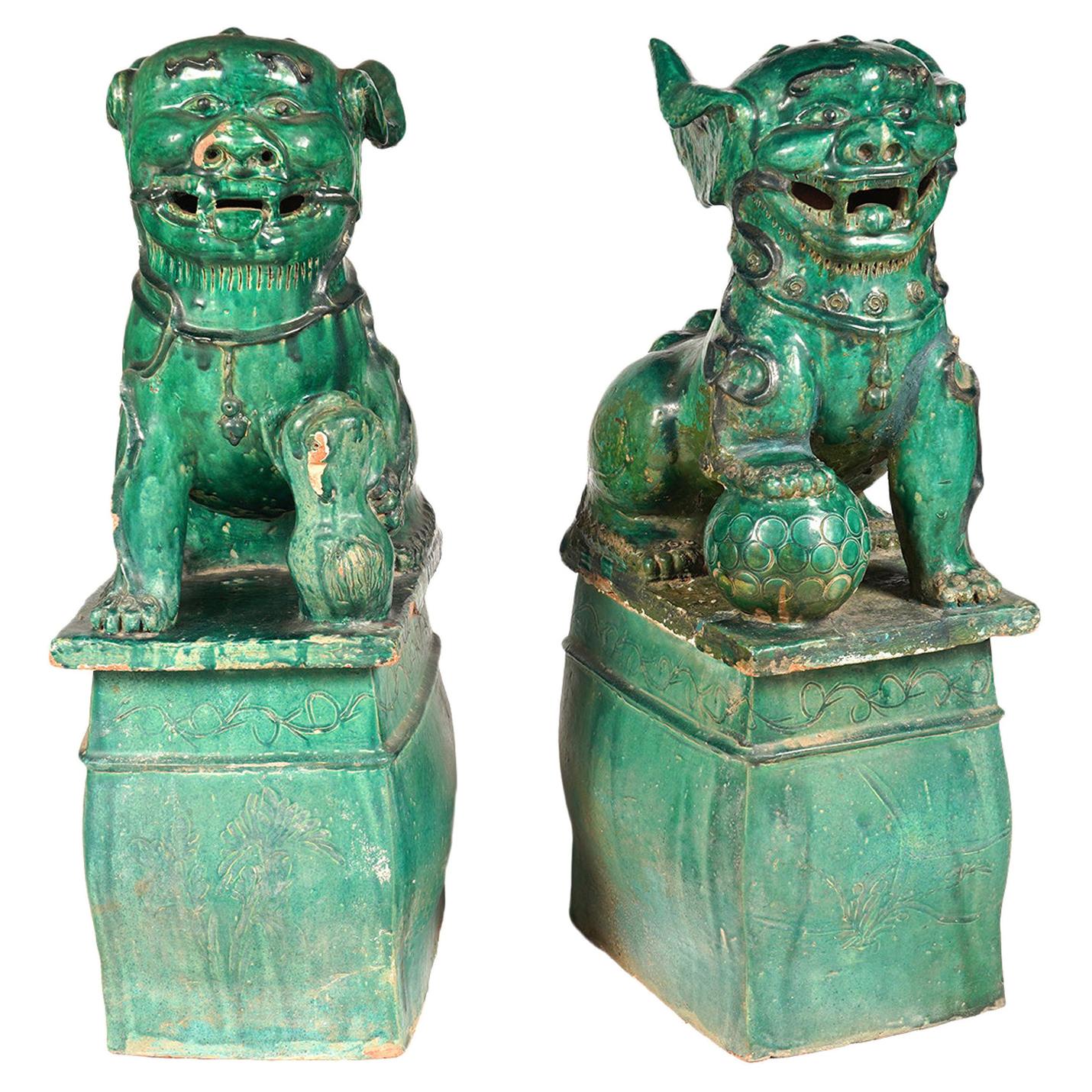 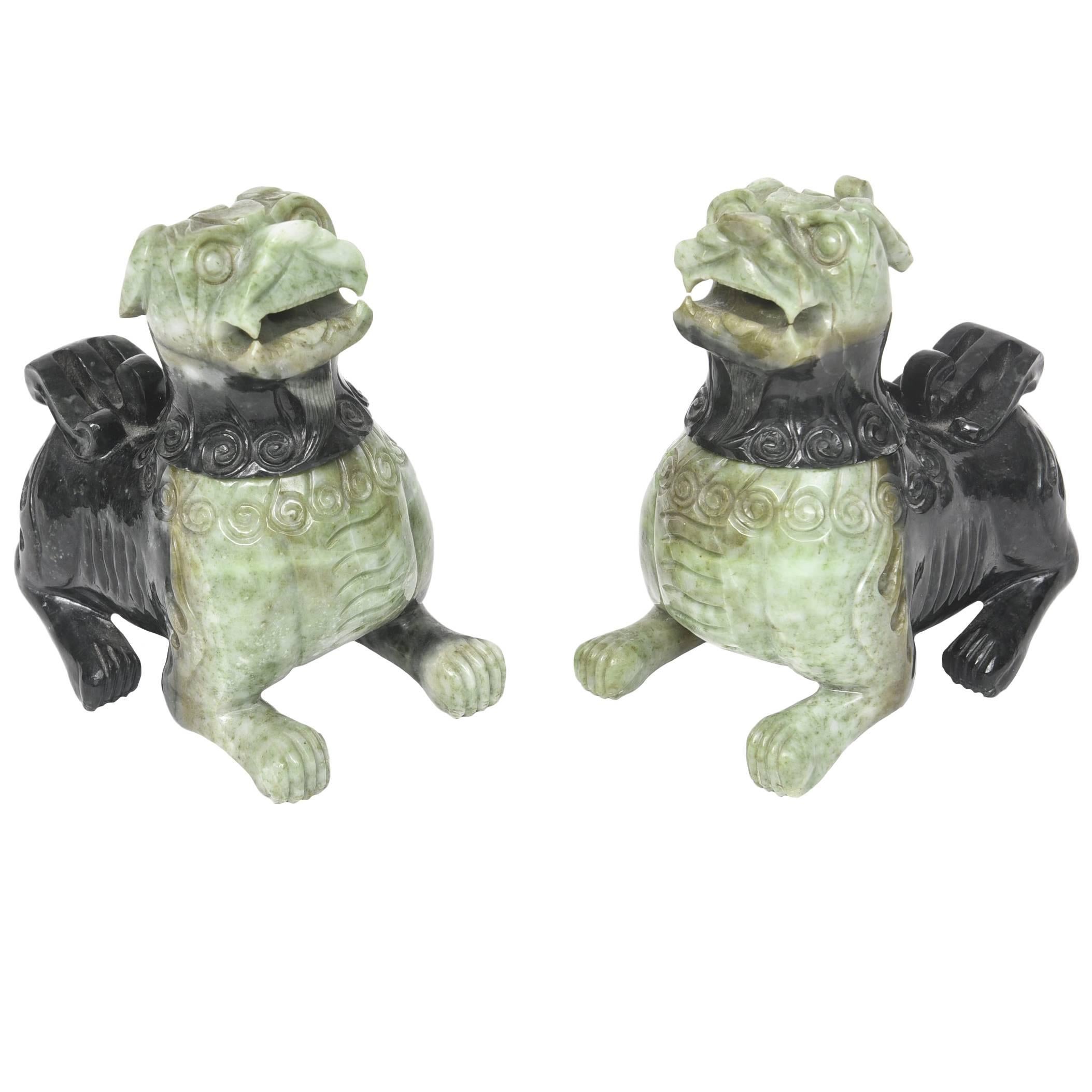 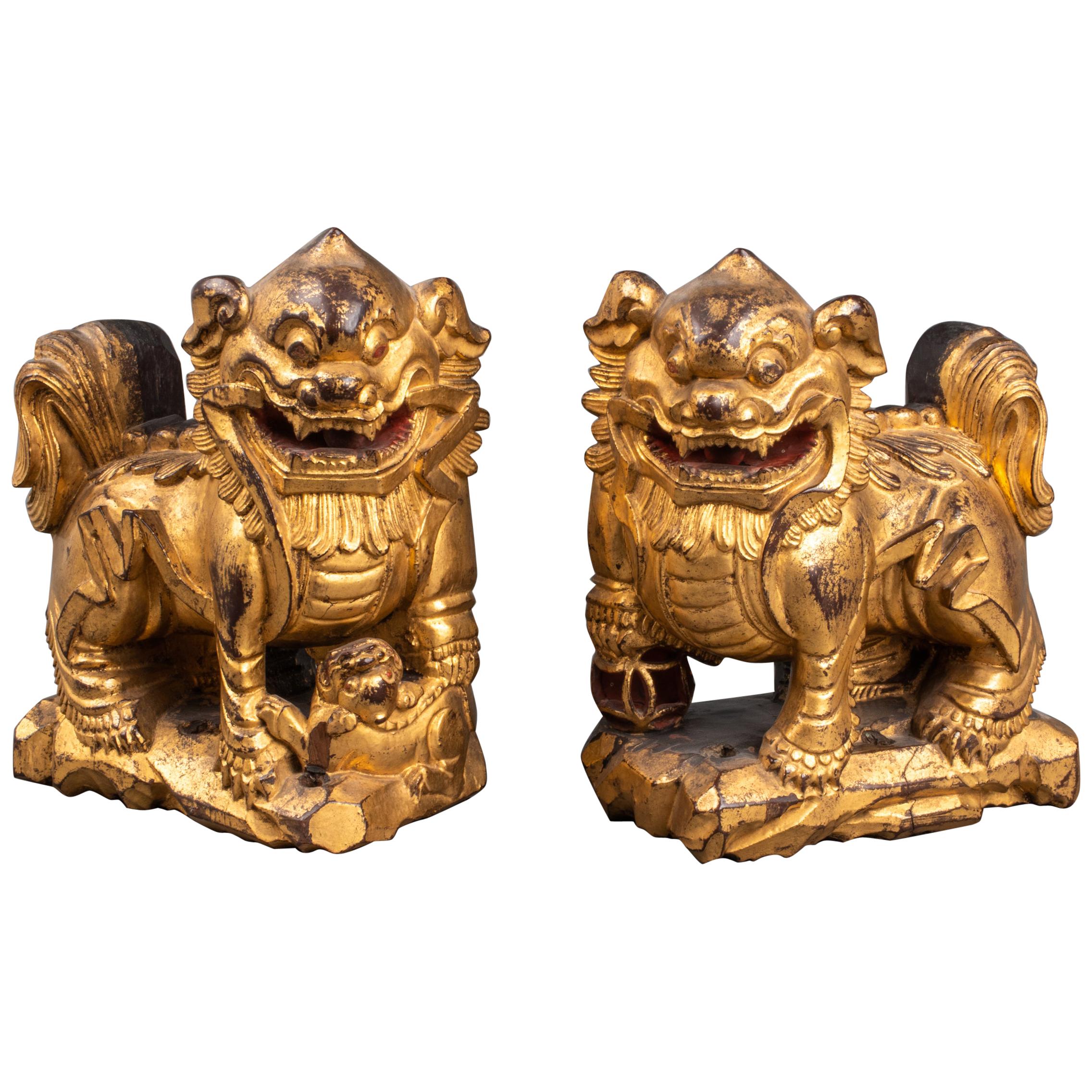 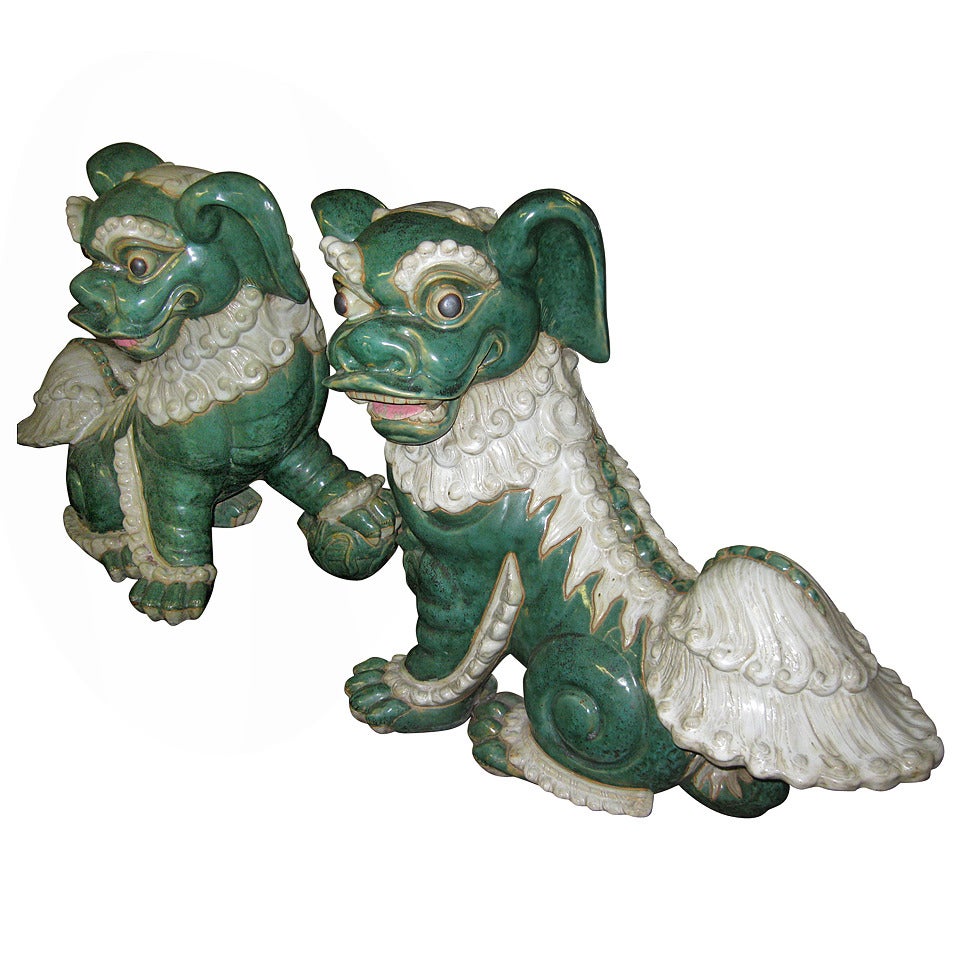 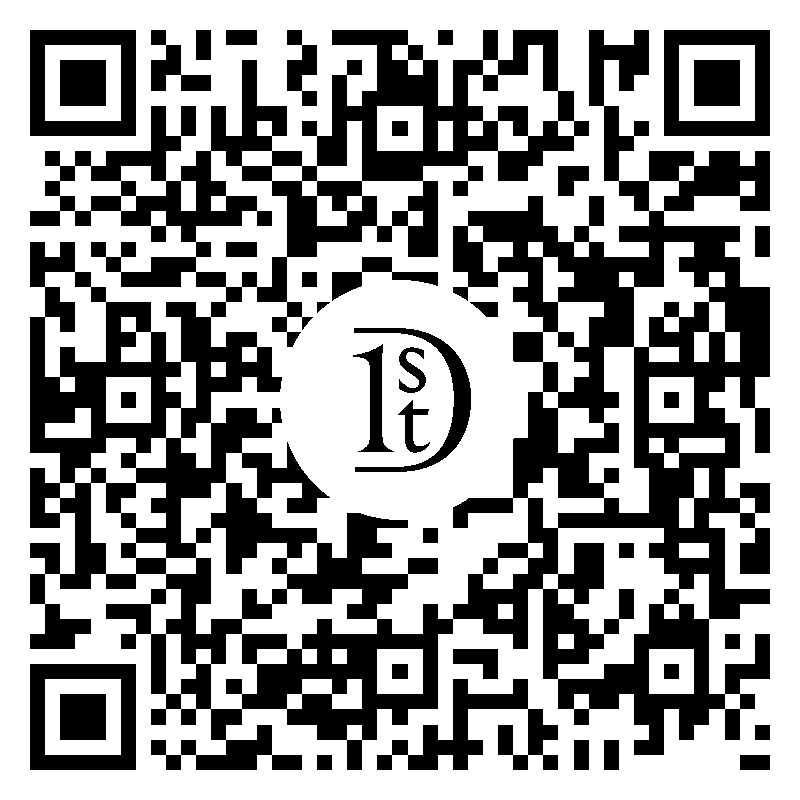 A fabulous and impressive collection of sixteen (16) ceramic Chinese export foo dogs (also known as foo lions), glazed in yellow, green and aubergine, late 19th and early 20th century, circa 1890's - 1930's, China. This incredible collection of sixteen yellow glazed foo dogs consists of six pairs, one near pair, and two individual joss stick holders. The largest pair with a black CHINA mark to the undersides, and the smallest pair with a red CHINA mark to the undersides. The foo dogs have a wonderful sense of charm and whimsy. They are all portrayed in a similar fashion, seated on their haunches upon a raised plinth, and glazed in famille jaune enamels, with yellow glazed bodies highlighted with green and aubergine, the plinths glazed a darker brown purple aubergine. Despite their similarities, they each have their own distinct personality, with expressions ranging from goofy and charming, to mischievous and sassy. The six pairs each consist of a male and a female. The male holds a ball underfoot, while the female has a cub underfoot or scurrying up her leg. The two individual joss stick holders are similar, with one large male and one smaller female, both with narrow vases rising from their backs, meant to hold joss (incense) sticks. The near pair also consists of one male and one female, both of similar height, but with different plinth designs. Heights of the foo dogs range from 4.75" to 12.25". Measurements provided are for the largest foo dog. Foo dogs, also referred to as foo lions, are protective beings, usually depicted in pairs, (one male and one female), originally meant to guard sacred and important spaces - temples and palaces, as well as personal homes and businesses. Lions are not native to China. Early artists had to rely on descriptions of a lion from traveling merchants or monks, which explains their unusual appearance. The notion of the foo lion was introduced into China from two separate directions and traditions. One following the Silk Road east from Persia, where images of lions were used to guard palaces. The other following the path of Buddhism north from India. Originally known as the Lions of the Buddha, the lion in Buddhism is a symbolic protector of the Dharma, often portrayed in pairs supporting the throne of the Buddha or various bodhisattvas.

Chinese Hand Carved Wood Foo Dogs, 20th Century
Located in Cookeville, TN
Up for you consideration is this intricate pair of hand carved wooden foo dogs. These dogs start on a simple rectangular base and painted in a black, red and gold. The paws are neatl...
Category

$3,995 / set
Mid-20th Century Pair of Chinese Carved Green Hardstone Foo Dogs / Lions
Located in Miami Beach, FL
Bi-color green hardstone carved to represent a pair of traditional Chinese foo dogs and lions. The heads of these impressive creatures come off so they can be used as incense burners.
Category

$2,800 / set
Hand Carved Chinese Stone Foo Dogs
Located in Cookeville, TN
Offering this stunning hand carved Chinese stone foo dogs. Hand carved with all the intricate details on the body of the foo dog. The foo dog is in its standard pose with one foot on...
Category

$1,095
Late 19th century Pair of Glazed Porcelain Foo Dogs
Located in Savannah, GA
Extraordinary pair of fine glazed porcelain Foo dogs came to us out of an estate here in Savannah, Georgia, belonging to an old general that long ago brought them from Thailand. Used...
Category