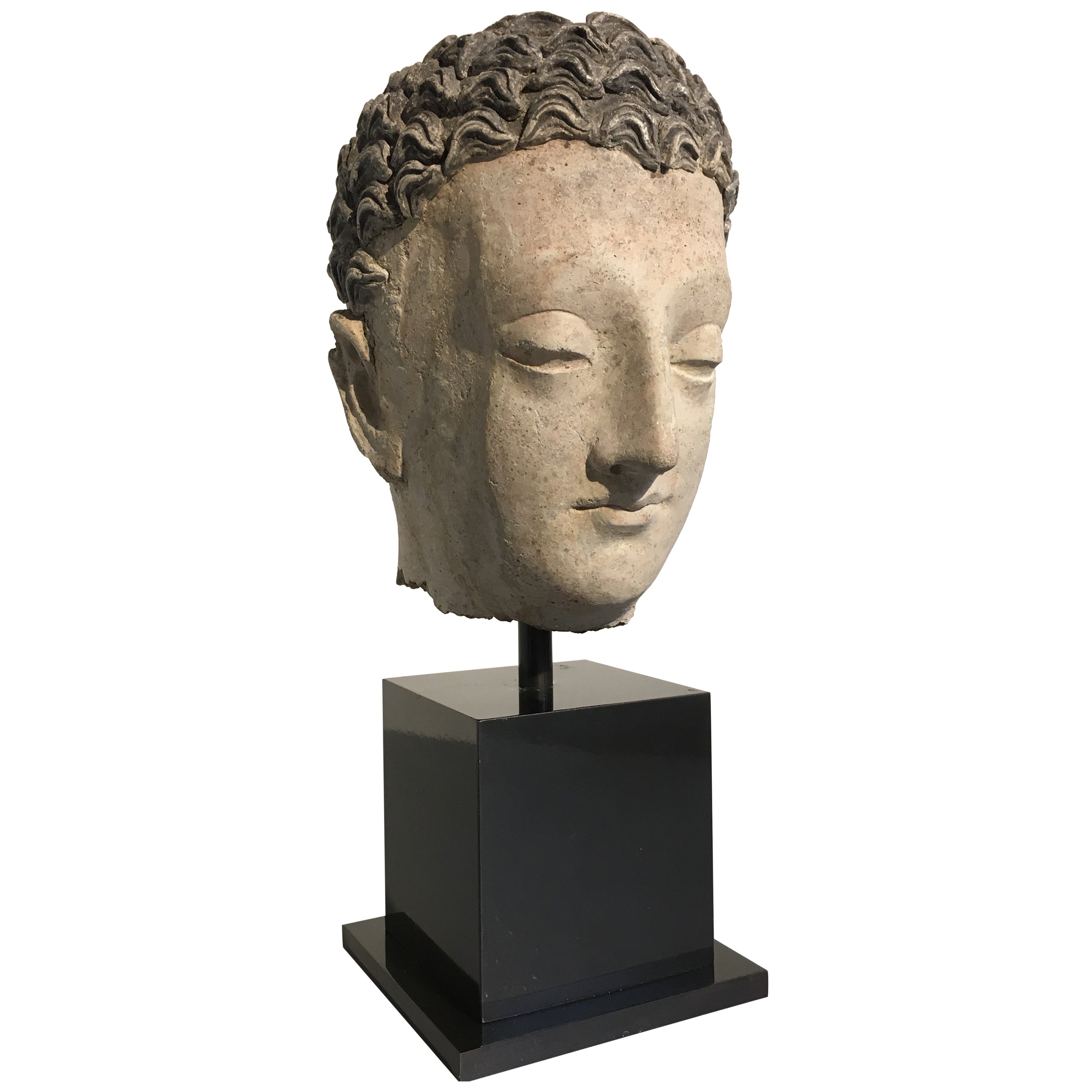 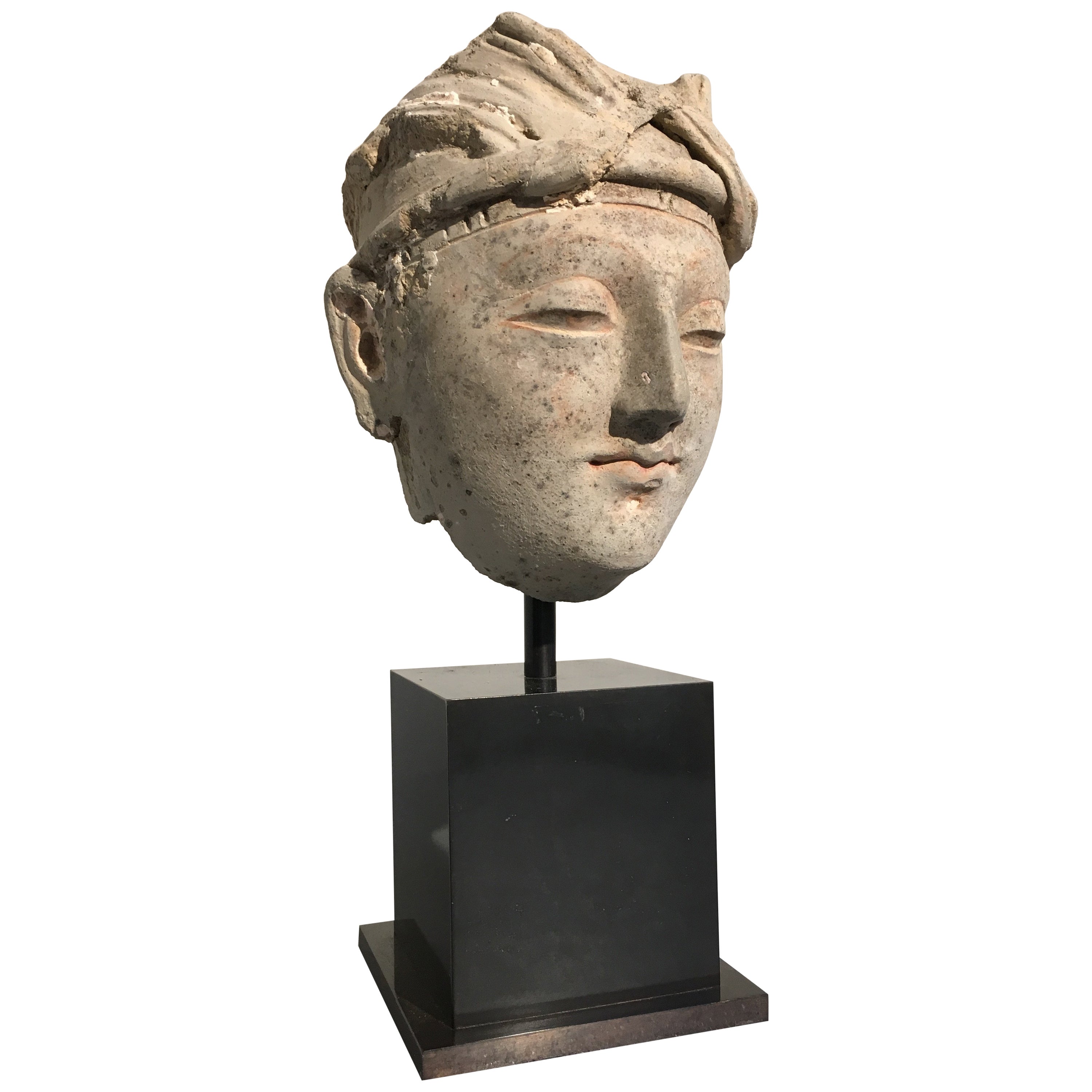 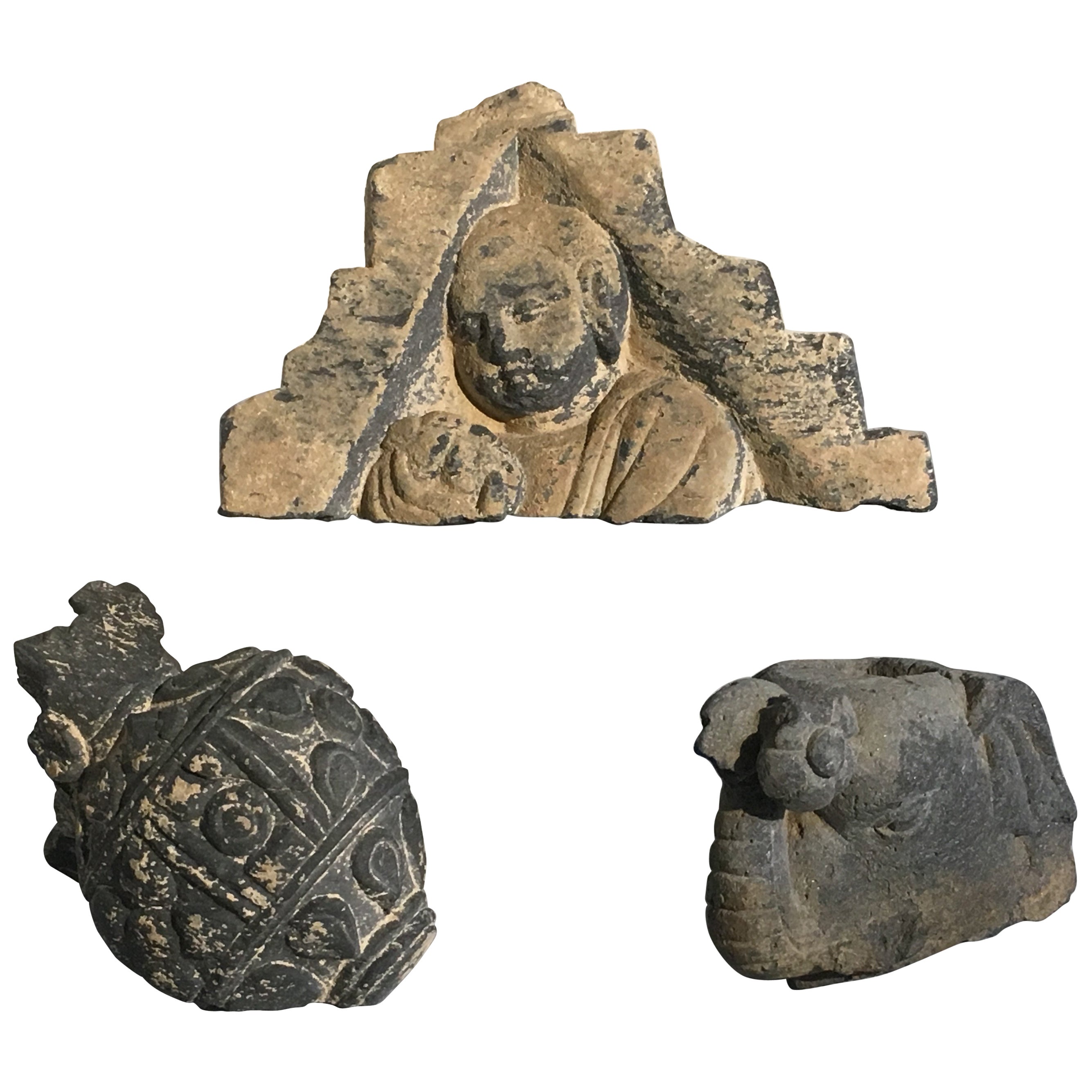 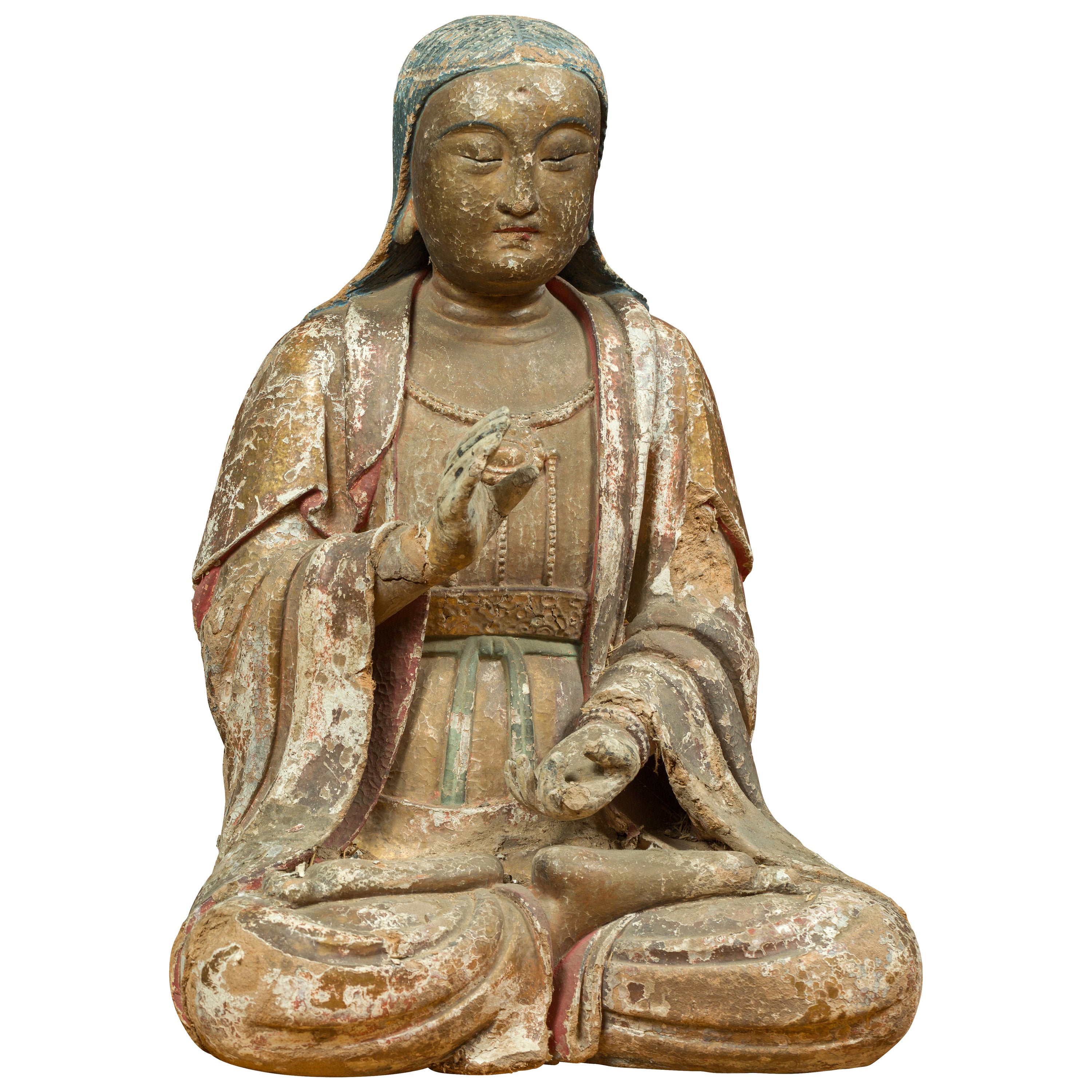 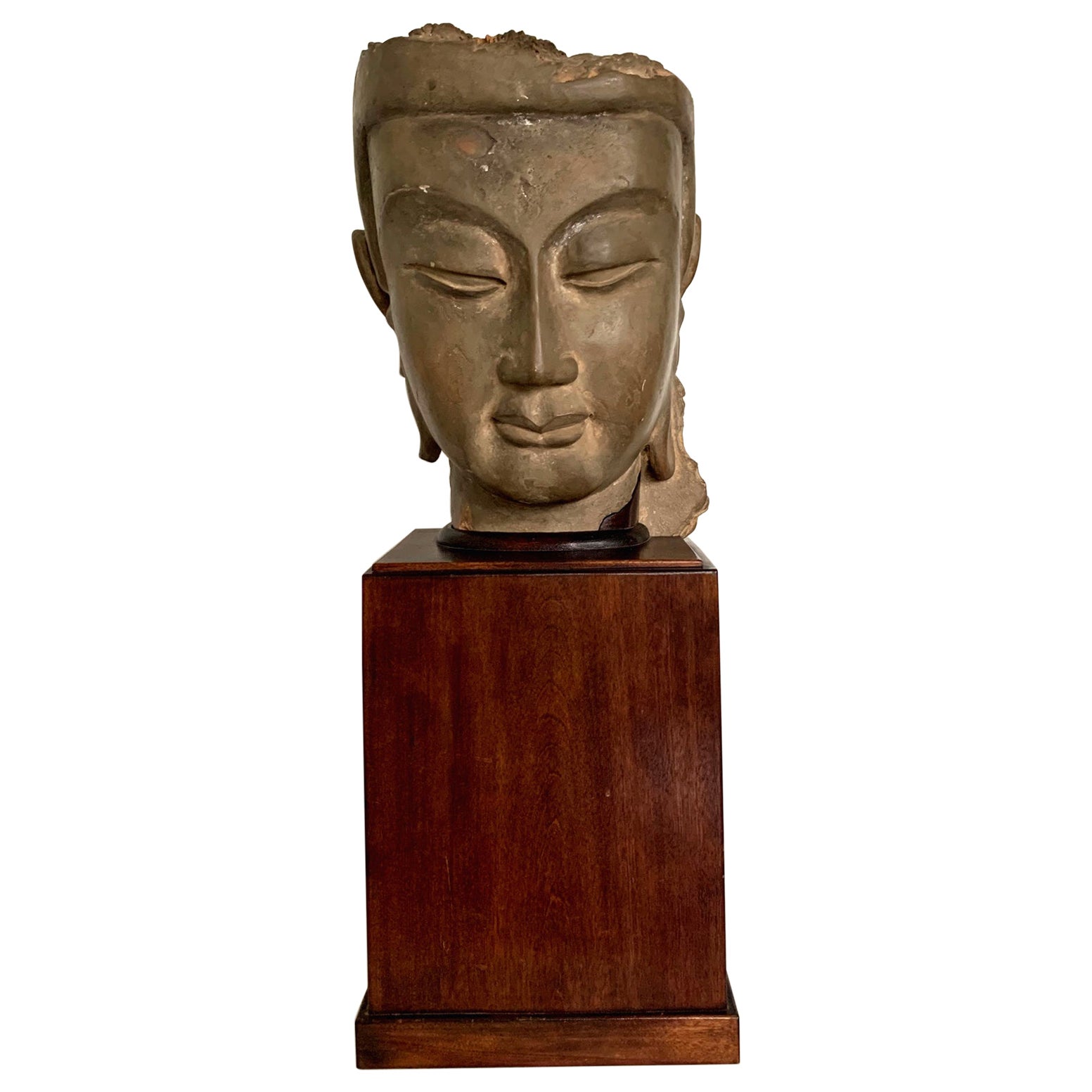 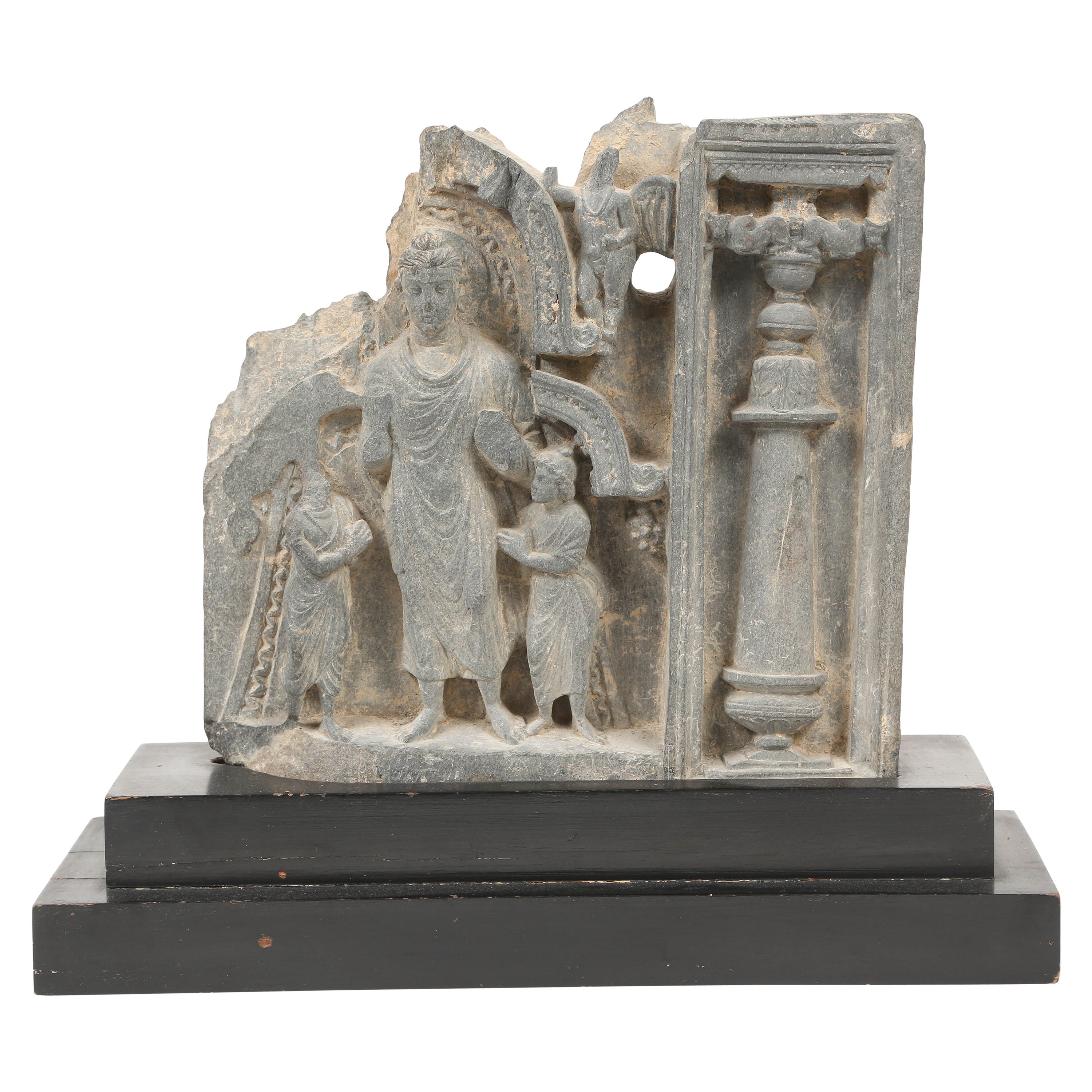 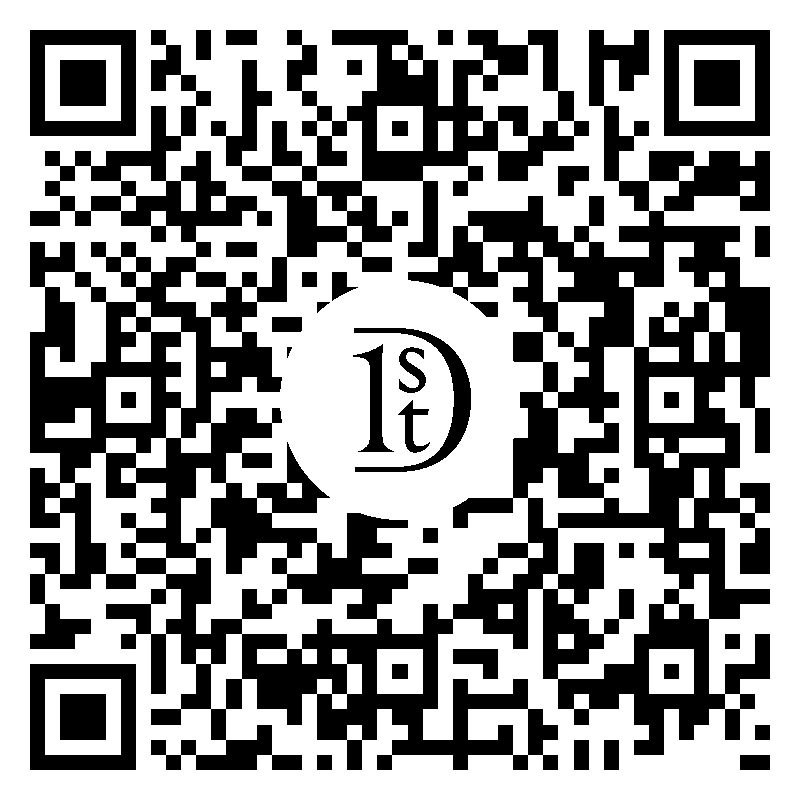 A striking Gandharan molded stucco head of a male Bodhisattva, tentatively identified as Manjushri, ancient region of Gandhara, probably Hadda or surrounding area, 3rd-5th century. The Bodhisattva is sculpted of stucco in an idealized manner as a youthful male, with soft and kind features, a benign expression on his face. He wears an elaborate pleated turban wrapped around his head, with two sweeping lobes at the front. His turban secured on one side by a small image of a roaring lion. The lion may be read as a reference to Manjushri, the Bodhisattva of Wisdom, who is often depicted as riding or subduing a roaring lion, a metaphor for taming the wild thoughts of the mind. Manjushri gazes outwards in a beatific manner from almond shaped eyes, a gentle smile on his lips. The eyes at different levels when looking at the sculpture head on, indicating the original placement of the head was meant to be viewed at an angle. Remnants of pigments to the eyes, nose, mouth and ears. Mounted on a custom black metal stand. Hadda was an important center of Buddhist learning in the early history of Greco Buddhist Gandhara, and at one time may have housed a bone relic of the historical Buddha, Shakyamuni. The sculpture and architecture of Hadda followed Hellenistic artistic conventions faithfully, leading some scholars to believe the distinct Greco Buddhist style of Gandhara was first developed in Hadda before spreading to the rest of the region. The kingdom of Gandhara was situated at a crossroads of trade and cultures. Being one of the last remnants of Alexander the Great's Empire, the inhabitants of the Greco-Bactrian Buddhist kingdom preserved Greek culture and heritage for centuries after the decline of the Greek Empire. During that time, they also absorbed the cultures and traditions of the Indo-Parthians whose land they inhabited, creating a unique blend of Eastern and Western art.

Diamond Seller
These expertly vetted sellers are 1stDibs' most experienced sellers and are rated highest by our customers.
Established in 2001
1stDibs seller since 2010
140 sales on 1stDibs
Typical response time: 2 hours
More From This Seller
View All From Seller

$55,000
Fine Chinese Stucco Head of Bodhisattva Southern Dynasties
Located in Atlanta, GA
On offer is a fine Bodhisattva head made of stucco around a wood core circa 6th century AD. The fragment was part of high-relief wall sculpture based on its construction. The frontal...
Category

$7,800
Gandharan Frieze Fragment in Carved in Grey Schist, 2nd-3rd Century
Located in Kensington, MD
A scene depicting the Buddha with attendants carved in grey schist stone, 2nd-3rd century AD. From a Washington DC collection. The kingdom of Gandhara was located in what is now Pak...
Category

$4,500
19th Century Vietnamese Carved and Gilt Seated Bodhisattva Holding a Flower
Located in New York, NY
Vietnamese 19th century carved, lacquered and gilt Bodhisattva holding a secret flower. The Bodhisattva is seated on a lotus, which represents the symbol of fortune. This symbol can ...
Category

$17,500
14th Century, Stone Bodhisattva Head, Ming Dynasty, Art of China
Located in Hong-Kong, HK
A high place of Buddhism, China is particularly interested in the images of the Buddha and those of his divinities. The Chinese sculptors have thus developed a sacred art of an a...
Category