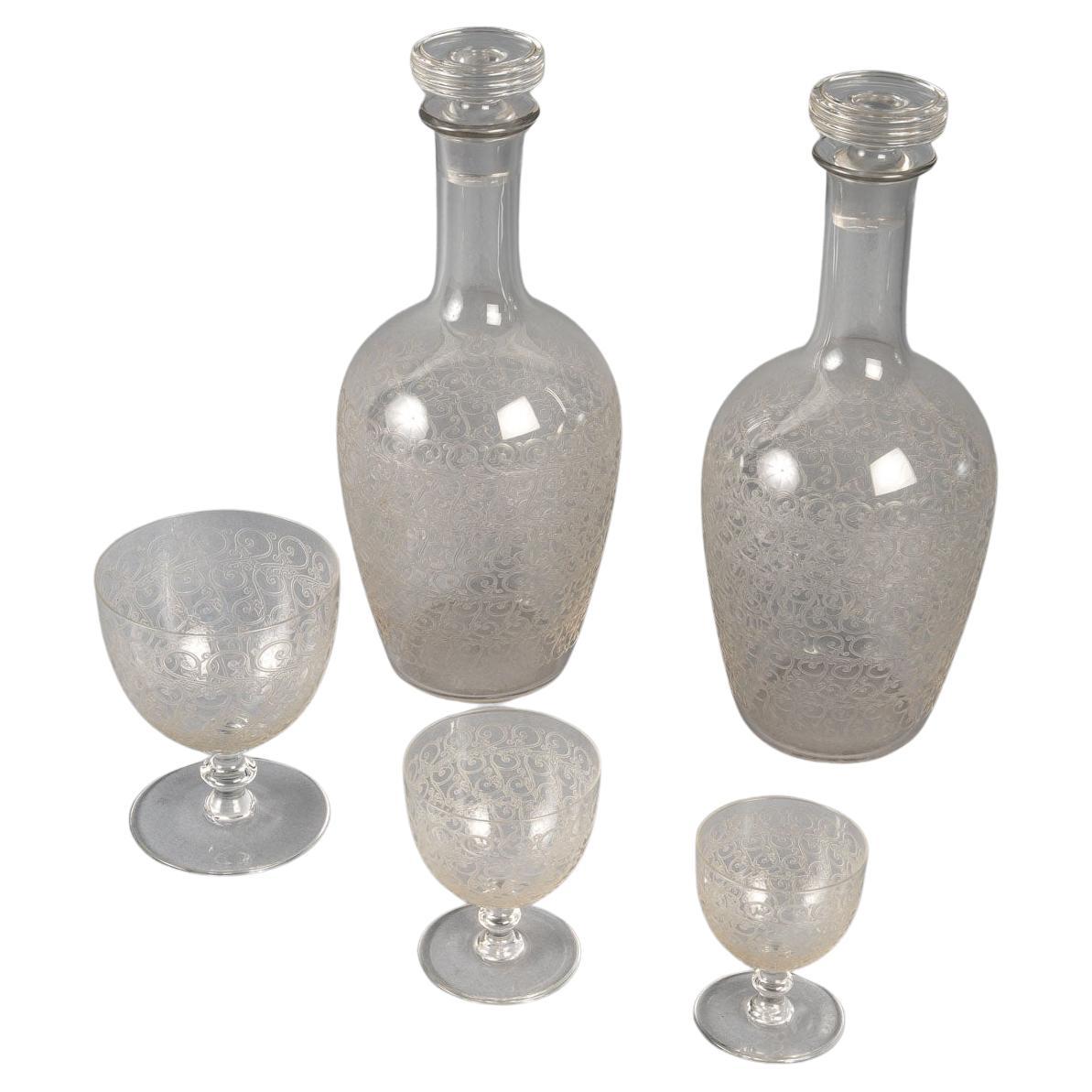 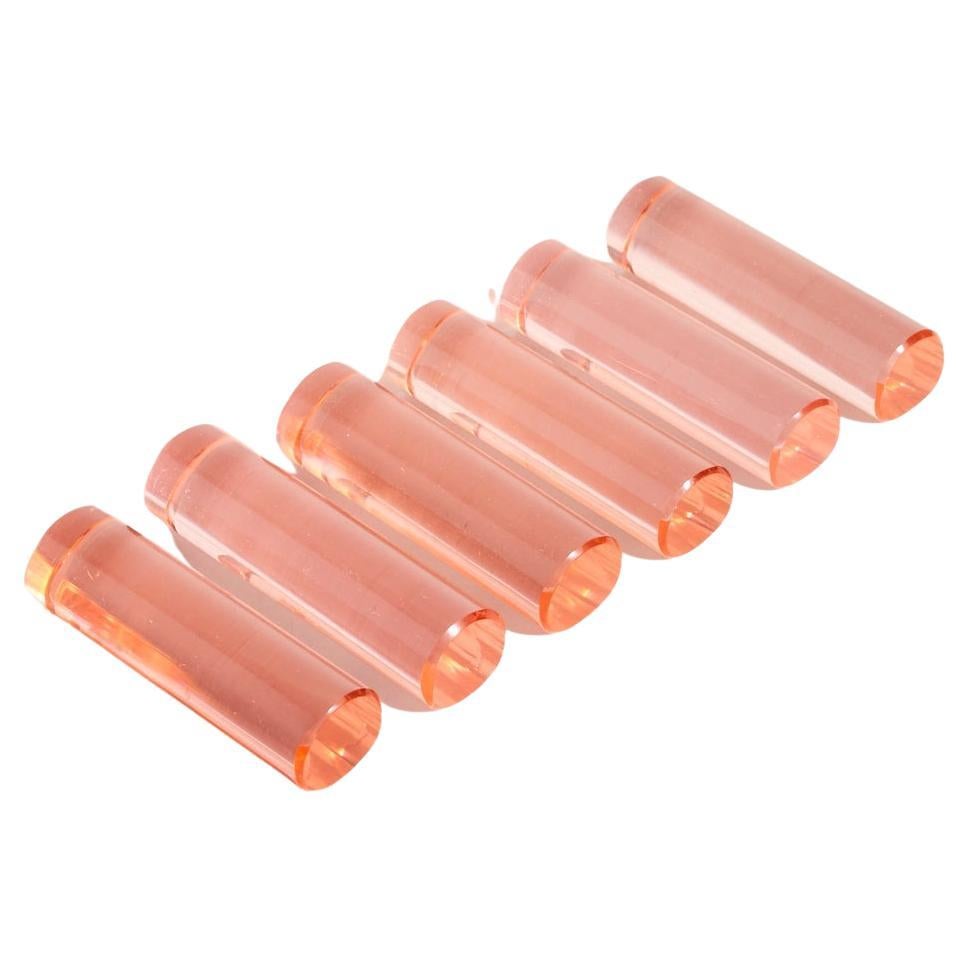 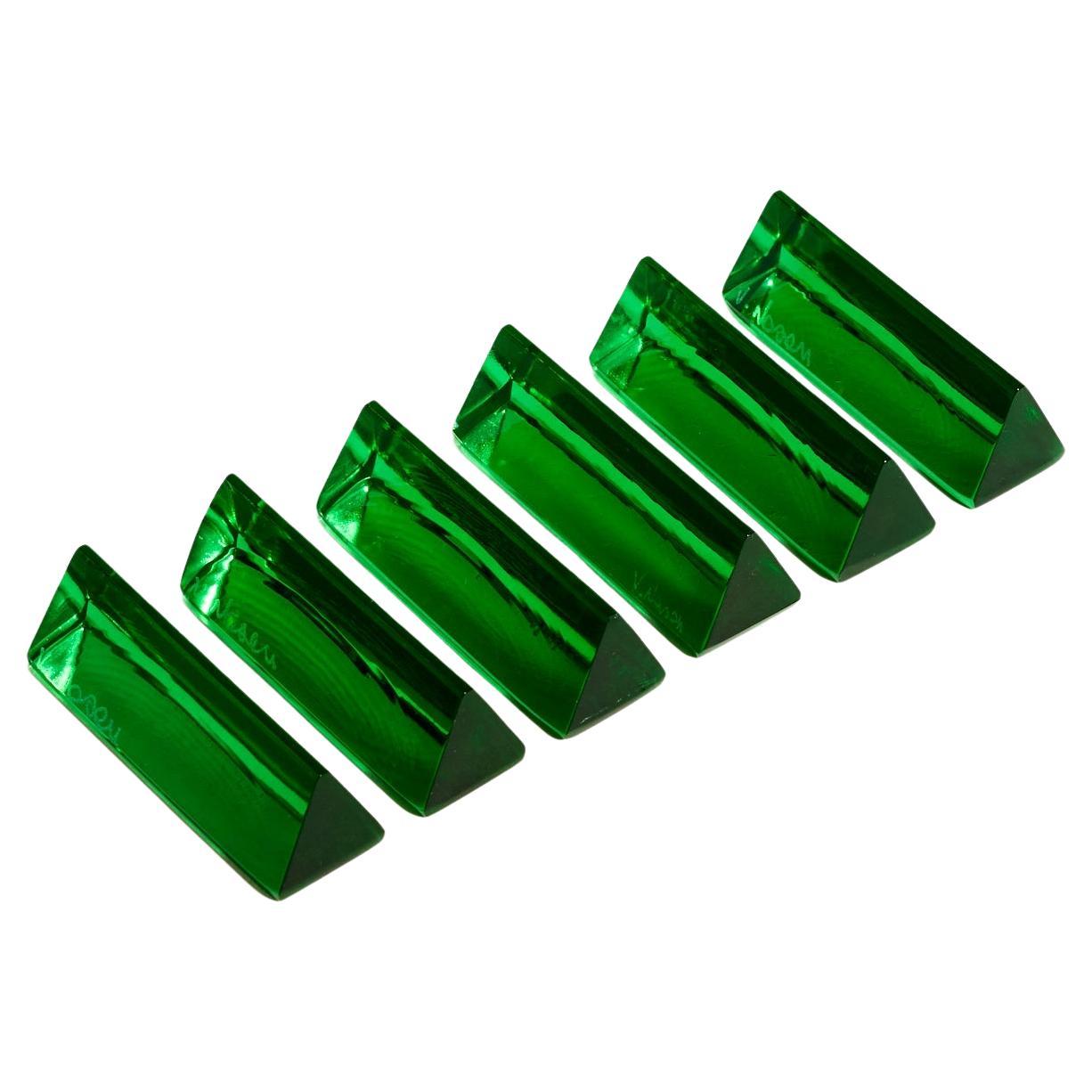 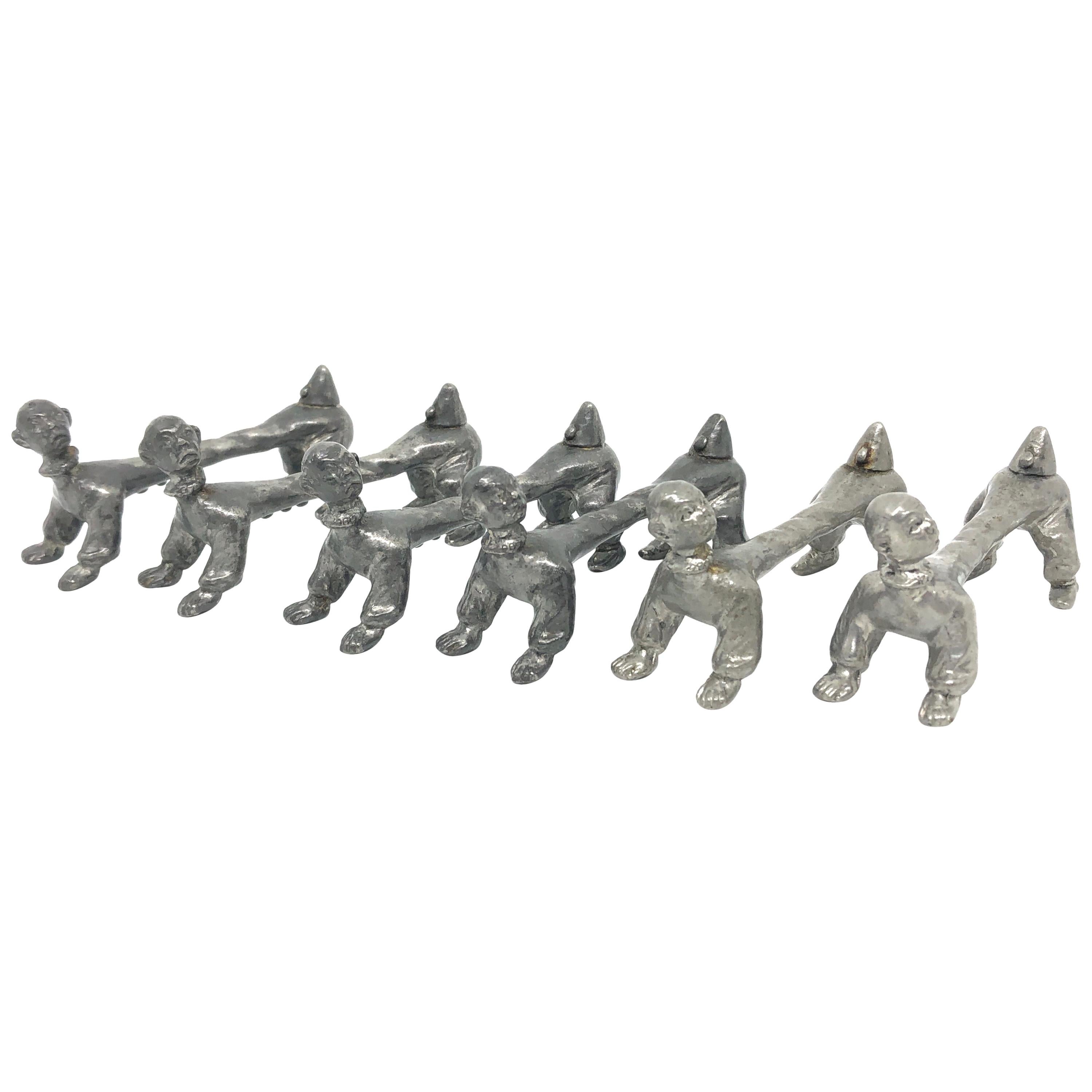 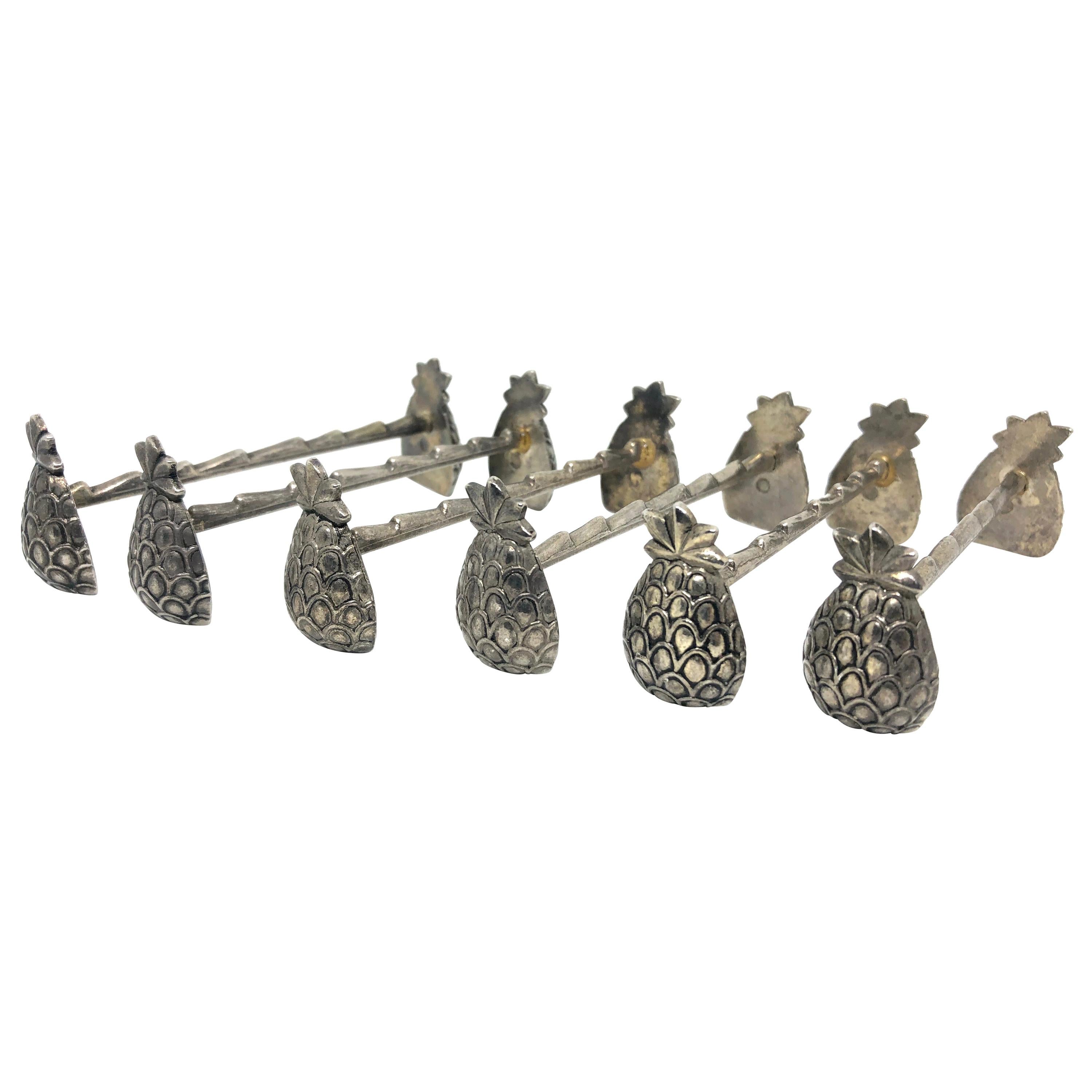 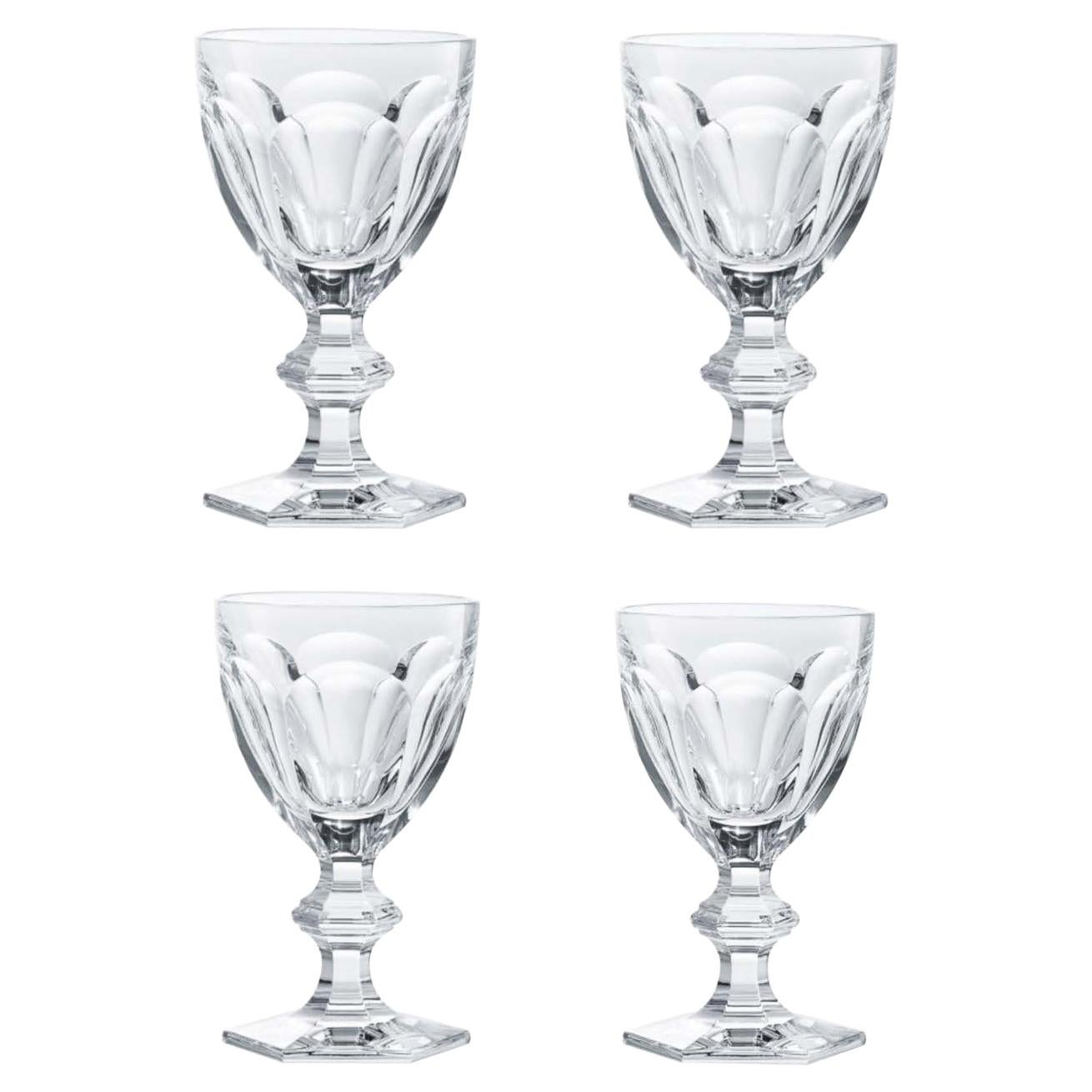 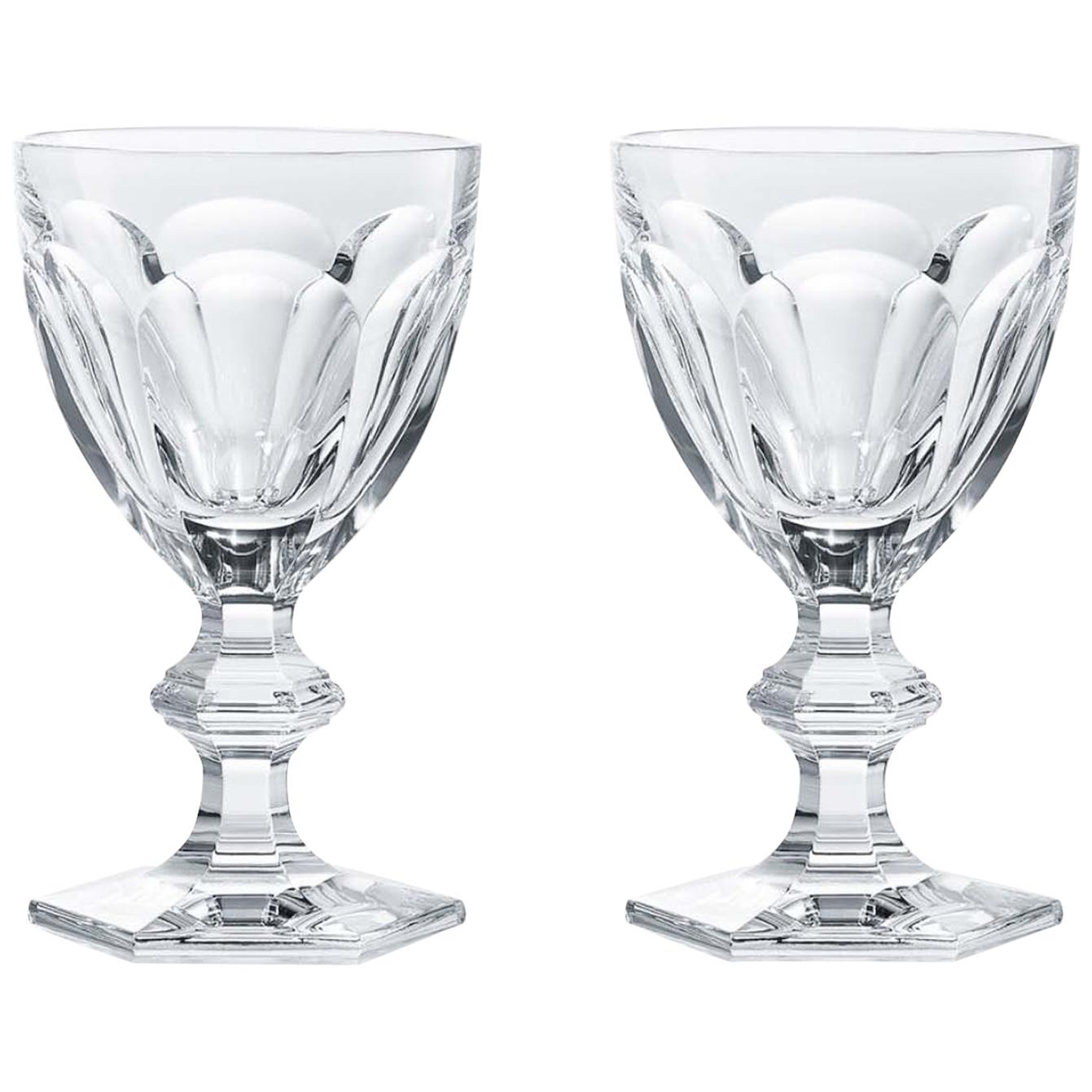 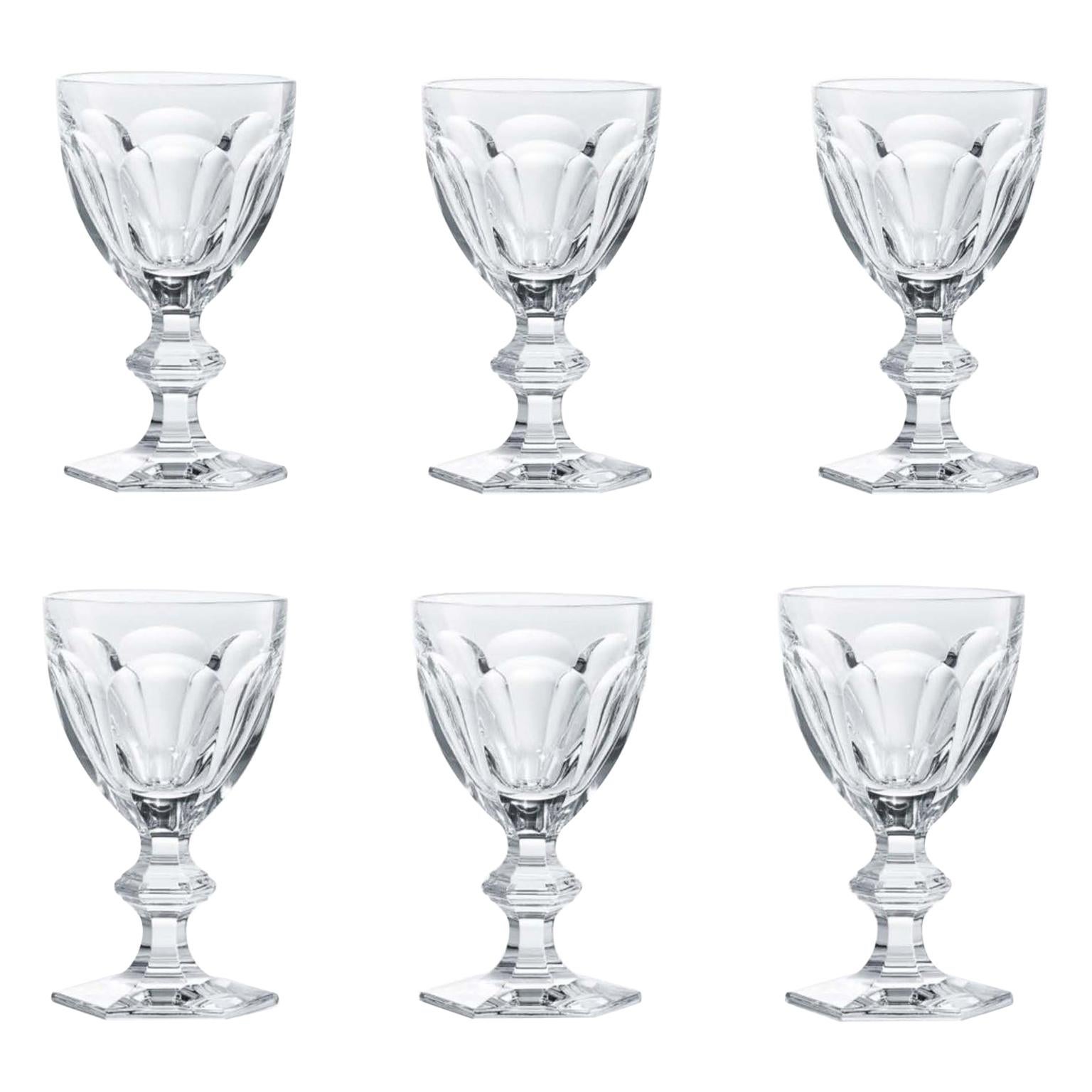 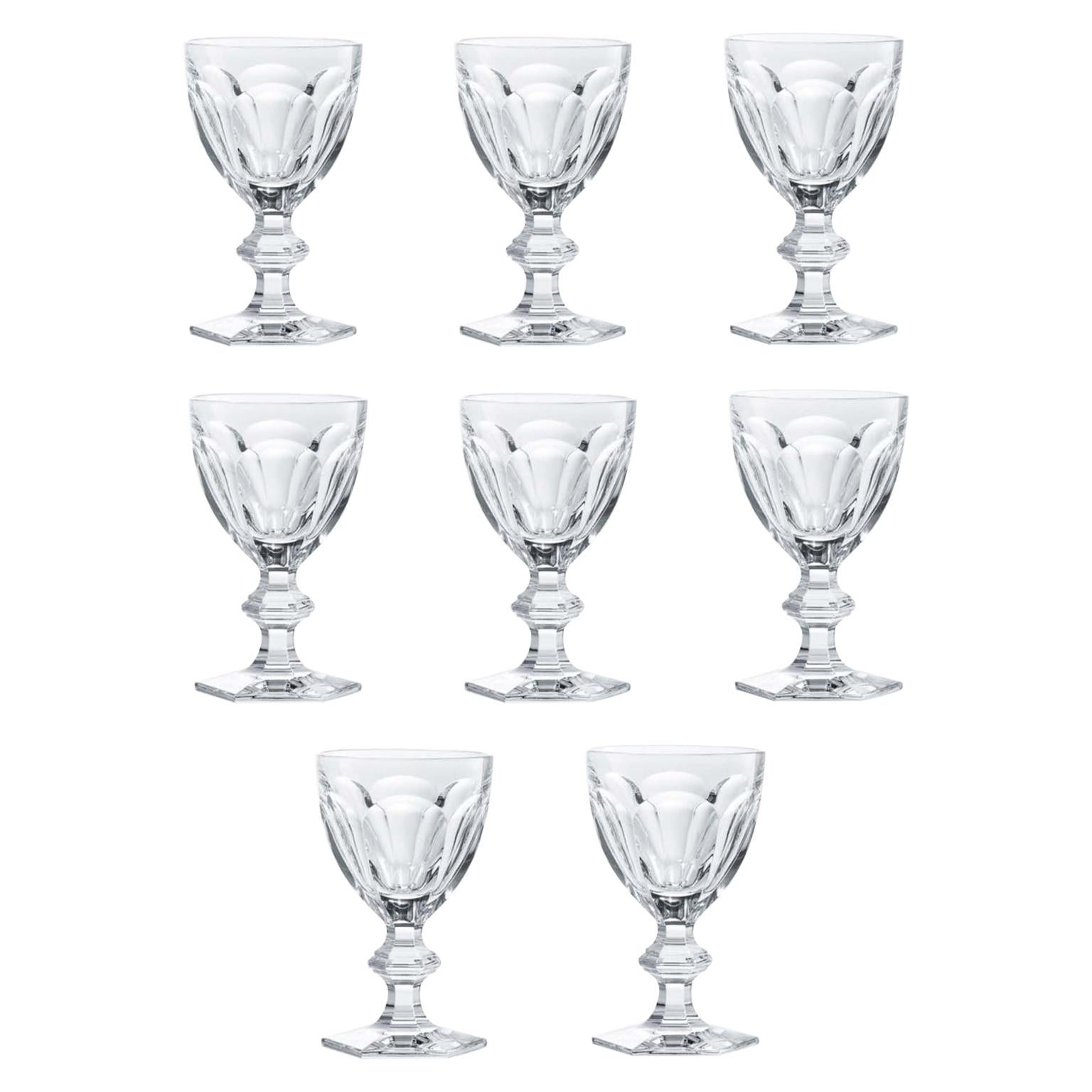 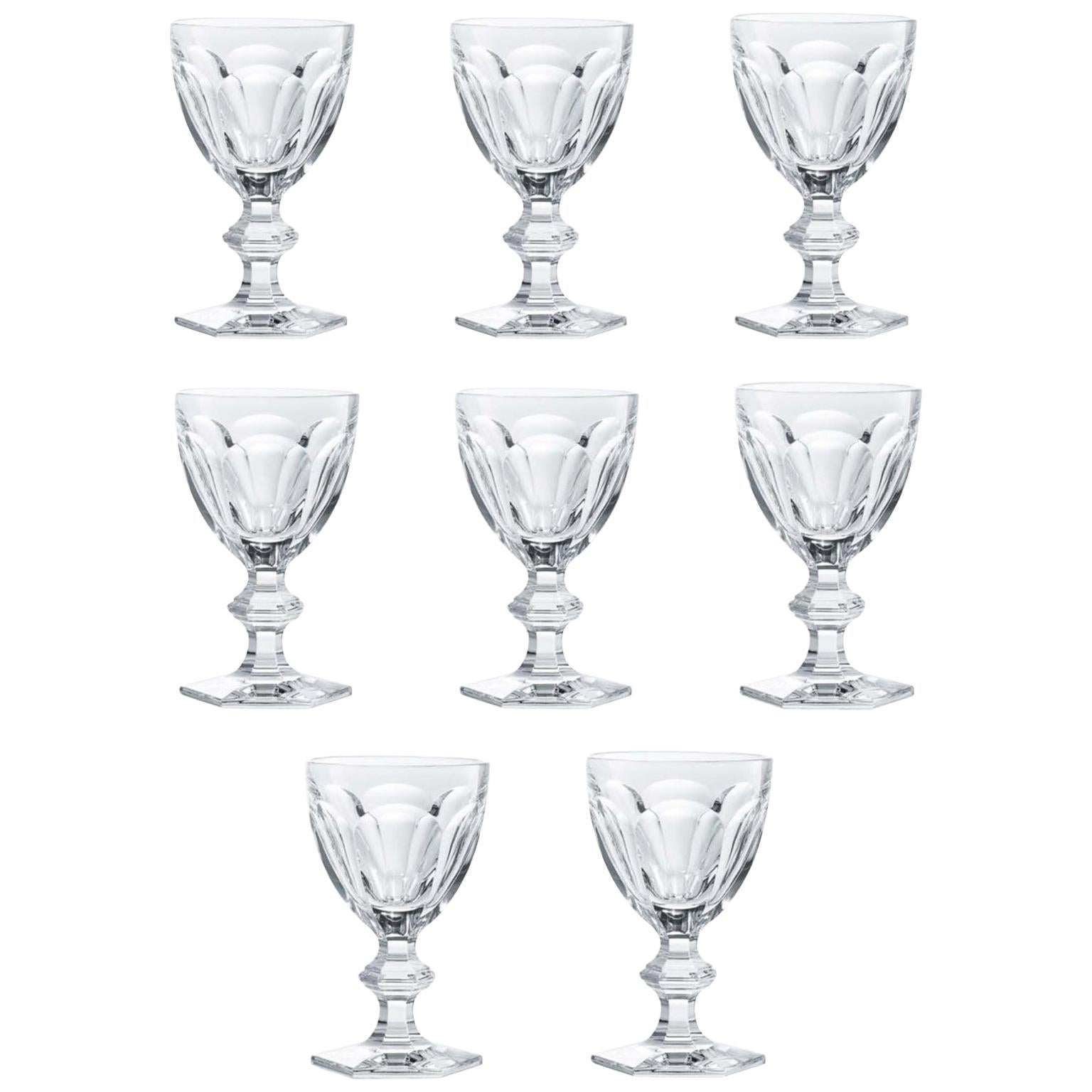 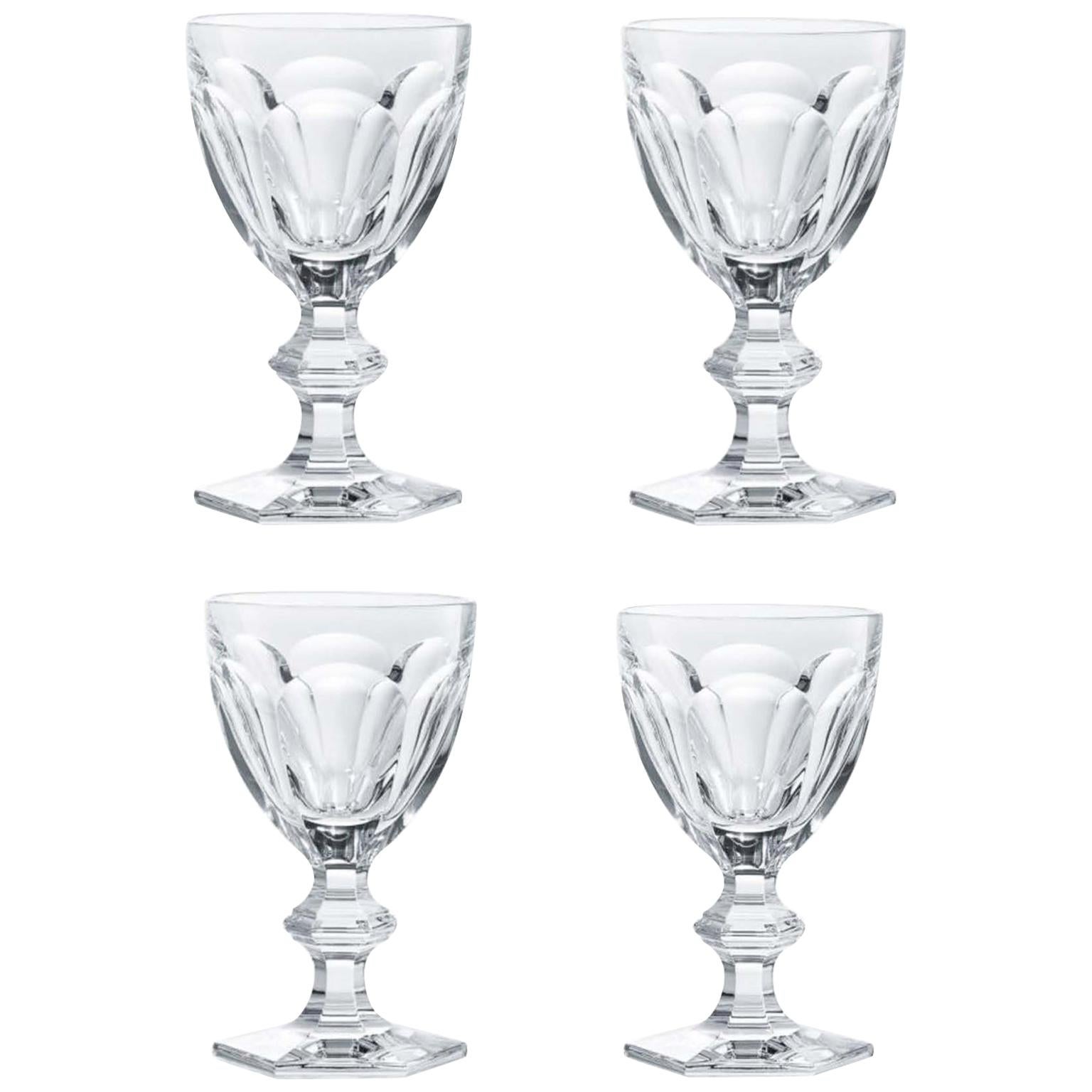 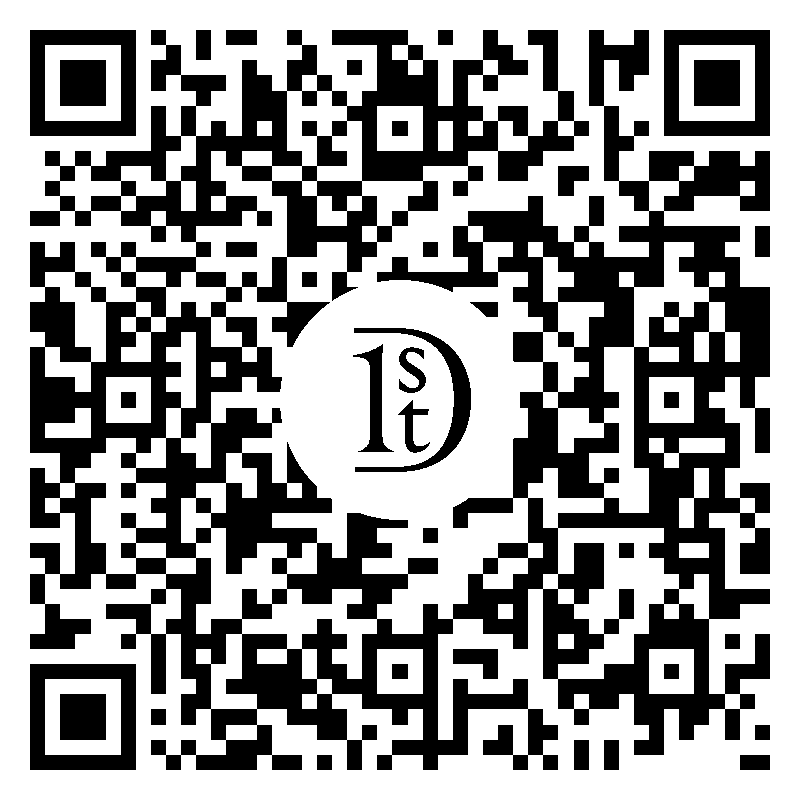 Please click on "CONTINUE READING" to consult the entire description of the service. Six molded crystal knife rests, translucent satin. Model Houdon adorned with two busts of cherubs. Busts of the king of Rome: Napoleon III according to Jean Antoine Houdon, sculptor, famous for his portrait busts and statues of philosophers such as that of Thomas Jefferson, George Washington, Louis XVI, Voltaire, Molie're, Napoleon 1st. These pieces are unmarked, made prior to the acid etched mark first used by the firm in 1936. Model S503 referenced in the 1907 Baccarat catalog. Baccarat: The French luxury brand Baccarat is considered the most famous glass-works in the world. Founded in 1764 by decree of King Louis XV, the crystal symbol of "Art de vivre a la francaise", has attracted over the centuries great personalities like Louis XVIII, Tsar Nicolas II, the Maharajas or Prince Rainier. The pieces - stemware, chandeliers, candlesticks, vases, bottles of perfume or jewelry - are created for 250 years by glassblowers, cutters, engravers and gilders, an elite consisting especially of a Master of Art and the 22 best workers of France. Measures: 3"9 (10 cm) length. 2" (5.2 cm) height. Weight: 824 grams. The condition is very good for this set. Exceptional in both design and execution, this fabulous set will grace your table and will delight your guests. Shipping and insurance information : Sales only by shipment. Shipping worldwide with priority package express international. We deal with original genuine antiques over 100 years old. This set is not subject to import tax to the US. We ship purchase Mondays through Friday (outside french holidays) paid items will be shipped on the first shipping day after payment is received. After registration of your order and confirmation of your payment, your order is prepared and packaged with the utmost care to ensure you receive the items in perfect condition. Your package will be insured for the total value of your purchase (s). Tracking numbers (French and international) of your package will be sent by e mail to track your package online on the french website then on the website of postal service in your country. 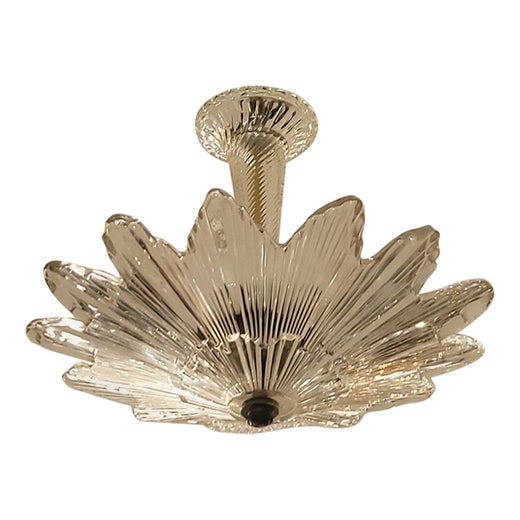 One of the world’s foremost crystal manufacturers, Baccarat has long been emblematic of luxury and exquisite craftsmanship. Starting in the early 19th century, objects produced by the French company — from stemware to chandeliers to brightly colored paperweights — became a staple of noble and wealthy households across Europe and as far afield as India. Along with the purity and quality of their glass, Baccarat crystal makers can boast a remarkable fluency with a range of design styles — from cut-glass neoclassical pieces to sinuously etched Art Nouveau designs.

Baccarat began as a kind of industrial development project. In 1764, the Bishop of Metz and other landowners in heavily forested northeastern France persuaded Louis XV to sanction a glassworks in the area — timber being a key resource required for the furnaces used in glass production. In its early years the company produced humble products such as window panes and simple drinking vessels. In 1816 a new owner began making crystal, and seven years later Louis XVIII — who had taken the throne after the defeat of Napoleon — gave Baccarat its first royal commission, for tableware. In ensuing years, an estimated one third of the company’s workforce was dedicated to commissions to the Russian imperial court alone.

Spurred by the intense competition between global industries in the latter 19th century — fought in public view in the many world expositions of the era — Baccarat elevated its level of artistry by adopting new technologies and creating a rigorous training program. The firm broadened its stylistic range, embracing Asian influences and new engraving methods, and increasing production of its now iconic millefiori paperweights. The designer George Chevalier, who worked for Baccarat for more than five decades beginning in 1916, ushered the company into the realm of modernist design. In recent years, Baccarat has employed such renowned contemporary designers as Philippe Starck and Marcel Wanders, ensuring that Baccarat crystal will continue to enjoy pride of place on up-to-date tables. But as you will see from the offerings on 1stDibs, Baccarat has items to suit any taste.

$360 / set
Baccarat Set 4 Clear Crystal Water Glasses
By Baccarat
Located in Brescia, IT
The Harcourt collection, one of the first model produced and presents in Baccarat archive, is reputed for its iconic design. Created in 1841, Harcourt stemware has been chosen and bo...
Category

$849 / set
Baccarat Set 2 Clear Crystal Water Glasses
By Baccarat
Located in Brescia, IT
The Harcourt collection, one of the first model produced and presents in Baccarat archive, is reputed for its iconic design. Created in 1841, Harcourt stemware has been chosen and bo...
Category

$424 / set
Baccarat Set 6 Clear Water Crystal Glasses
By Baccarat
Located in Brescia, IT
The Harcourt collection, one of the first model produced and presents in Baccarat archive, is reputed for its iconic design. Created in 1841, Harcourt stemware has been chosen and bo...
Category

$1,273 / set
Baccarat Set 8 Clear Water Crystal Glasses
By Baccarat
Located in Brescia, IT
The Harcourt collection, one of the first model produced and presents in Baccarat archive, is reputed for its iconic design. Created in 1841, Harcourt stemware has been chosen and bo...
Category