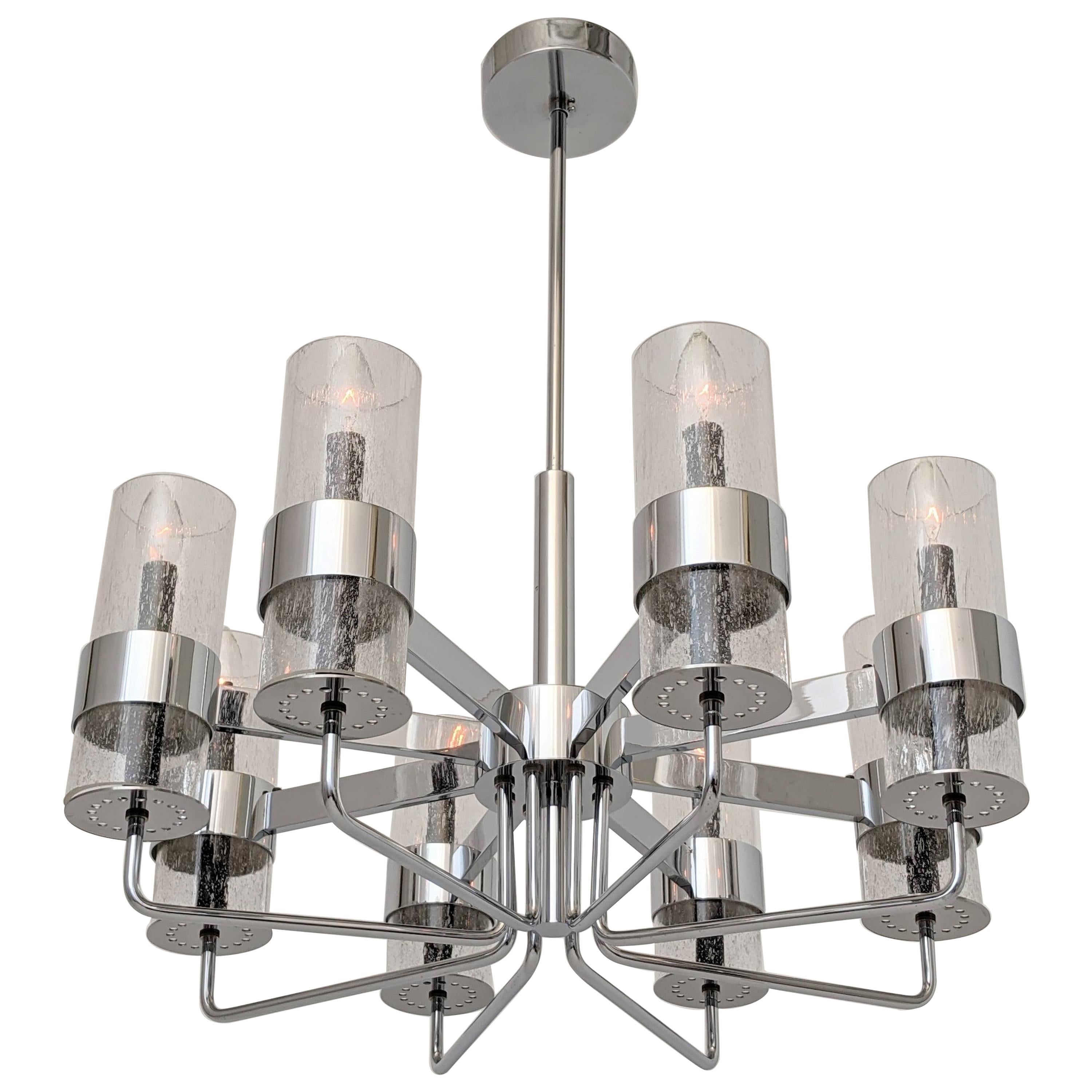 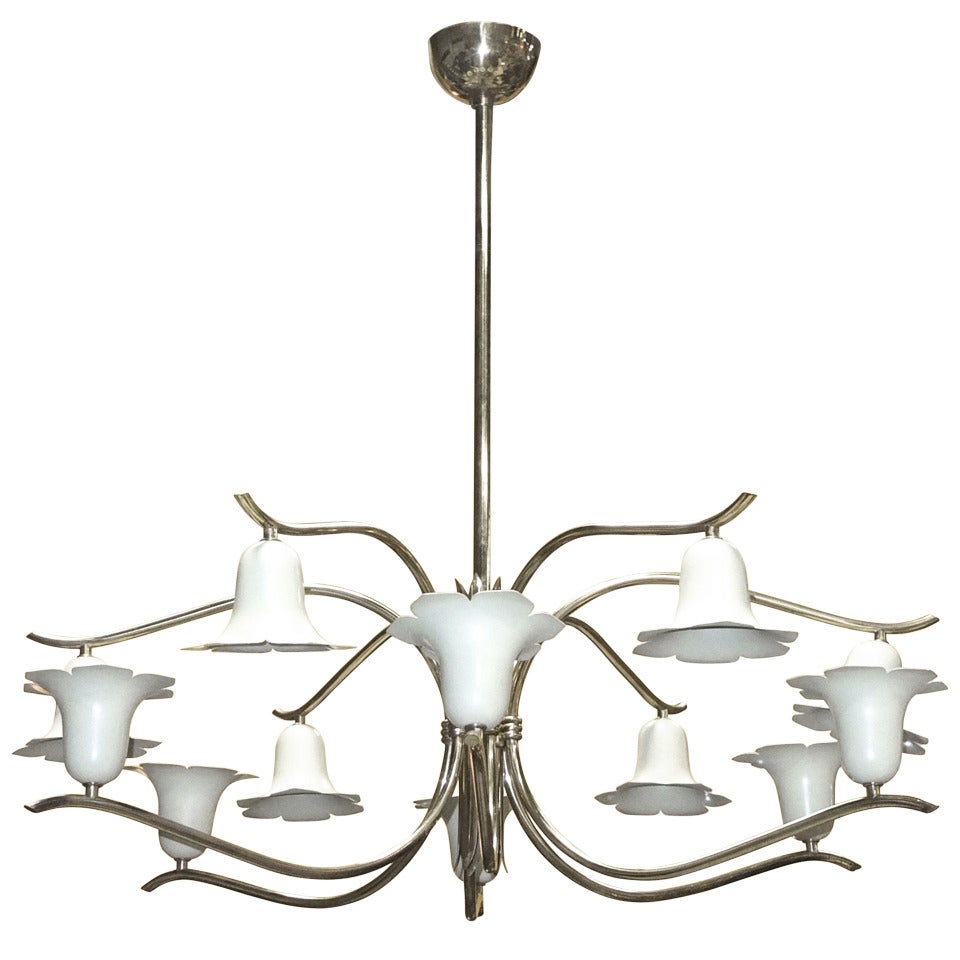 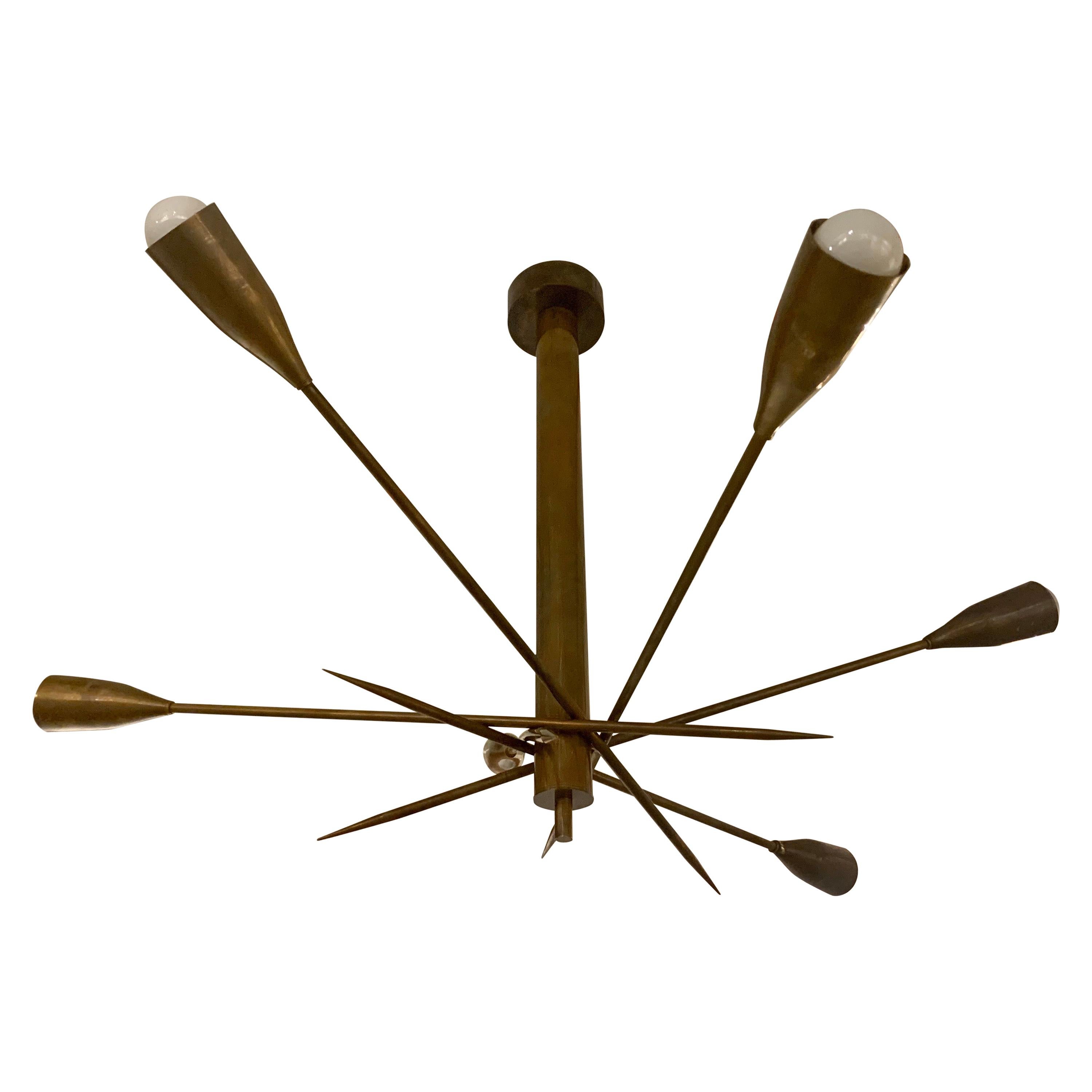 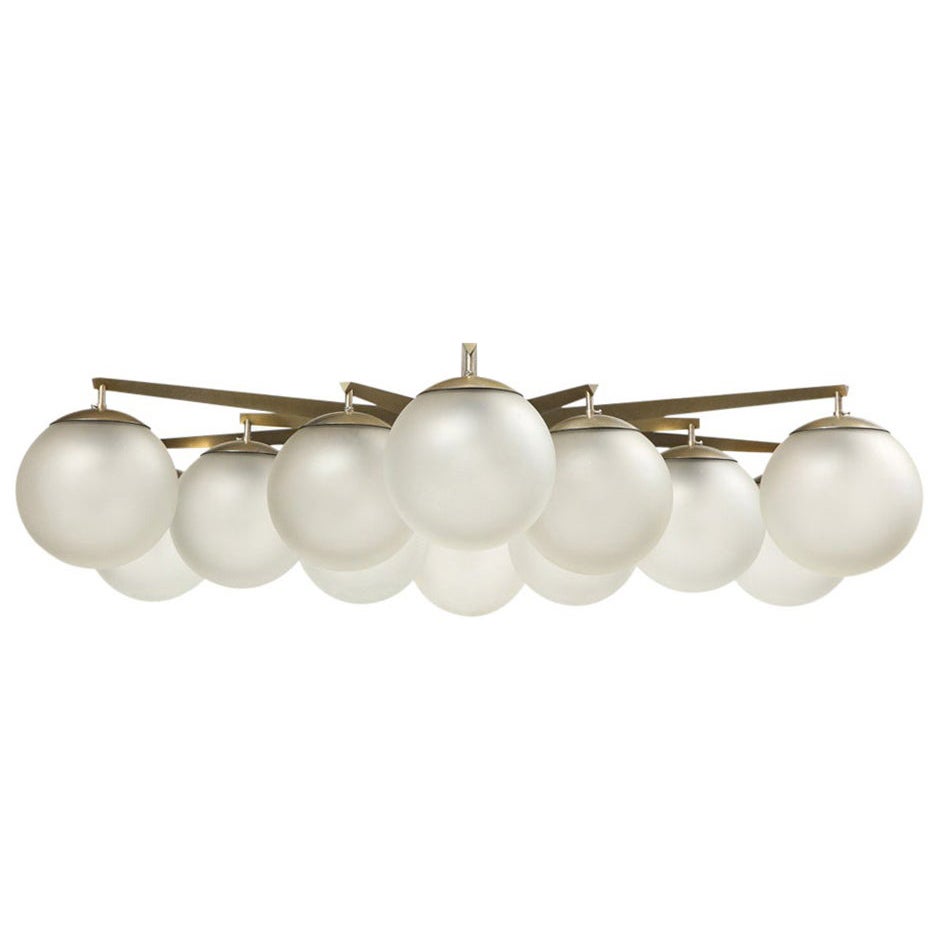 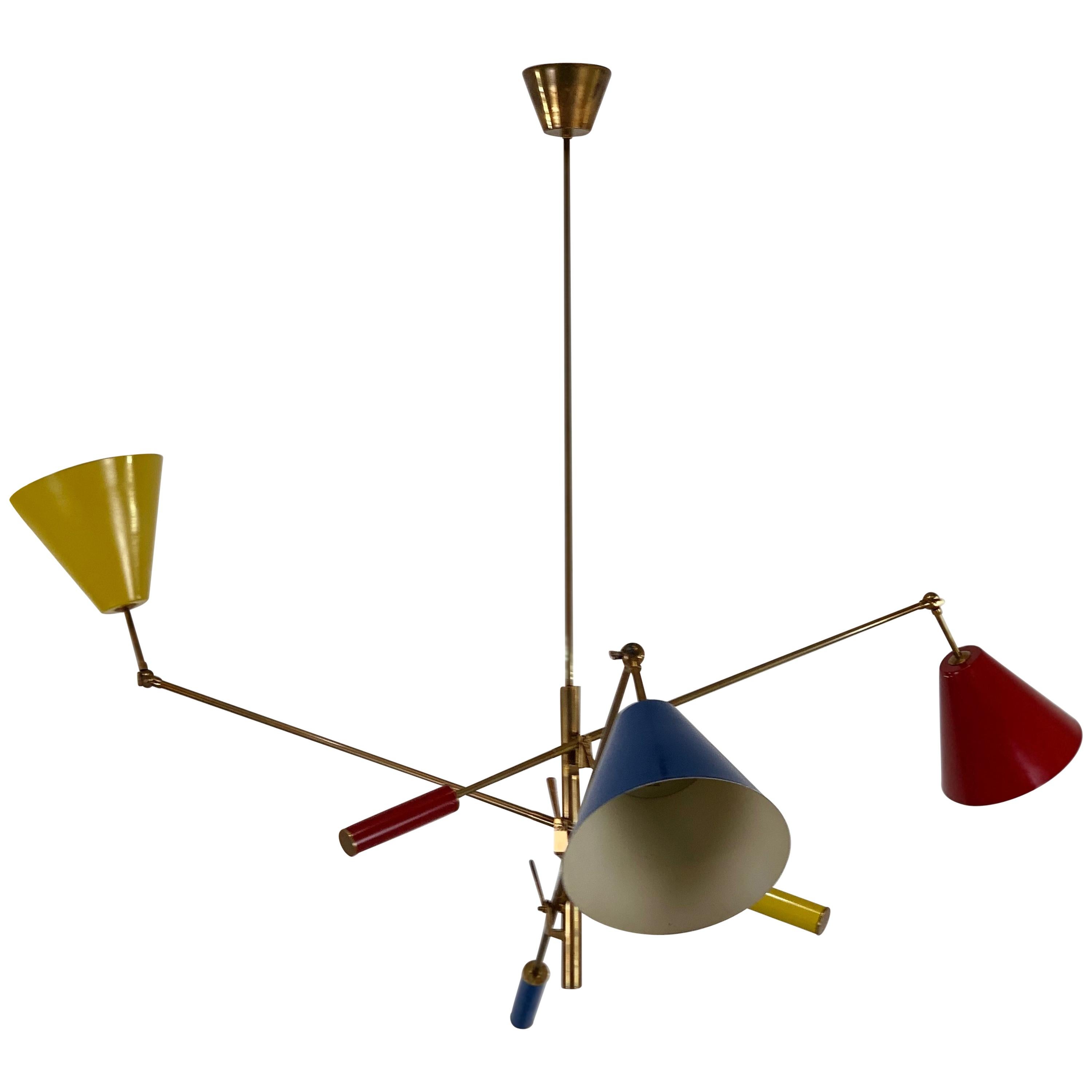 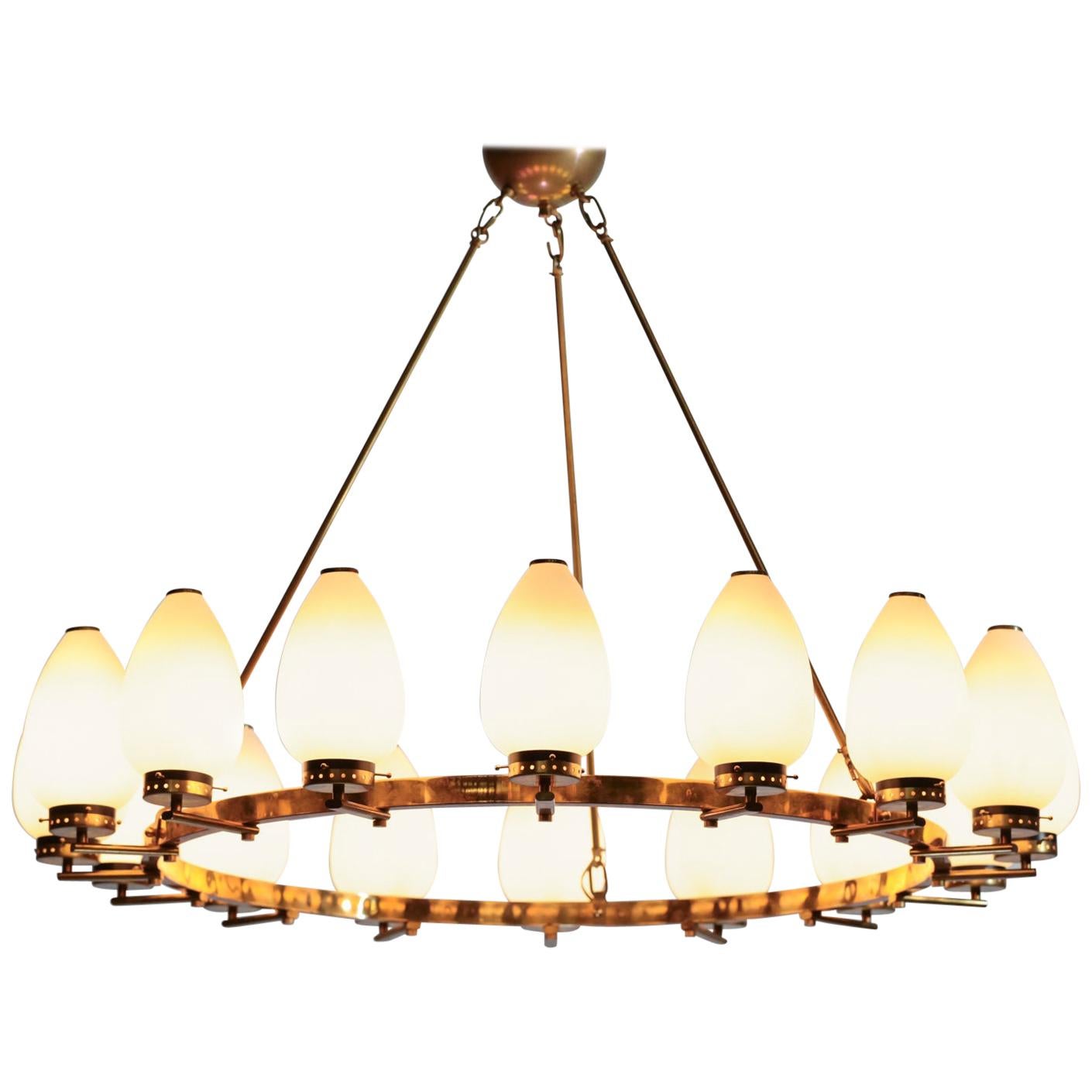 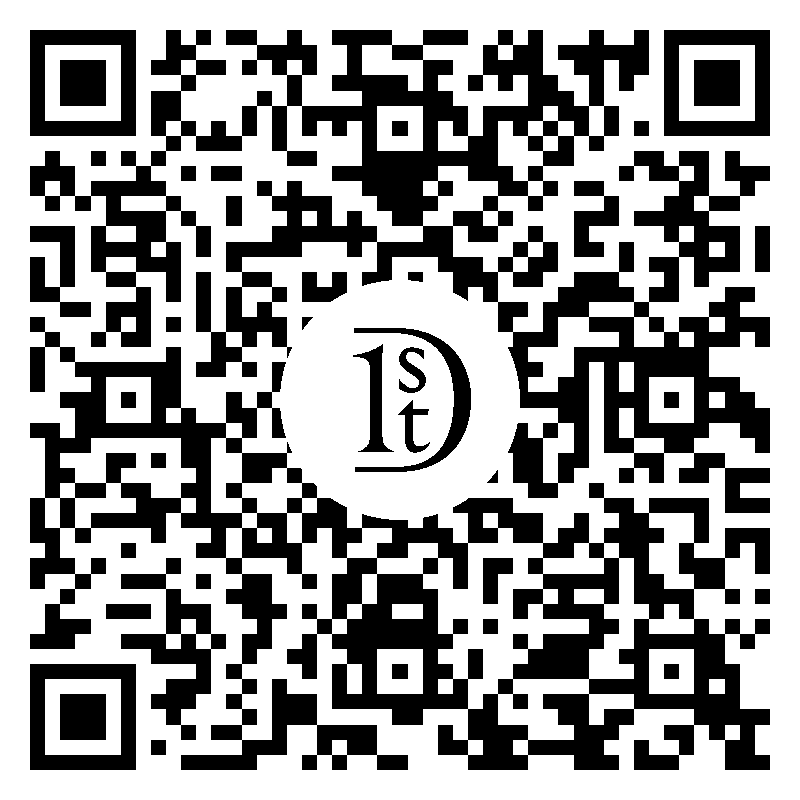 A unique chandelier from Angelo Lelli . This chandelier is striking by its simple minimalist design, prime quality brushed stainless steel, fine assembly and masterfull craftmanship. The smoked grey texturized plate glass have a subtle touch of amber into it , giving them a warm tone. A never seen model from Arredoluce, this chandelier is most probably a handmade, unique special order. Measure 34 inches wide by 12 inches high with the glass on. Original canopy with signature sticker inside. Two 32 inches long rods with a ring to connect them together, 64 inches total. Could be ajusted to specification. Plate glass are 5 inches wide by 5.5 inches long. There is a special order number two available, six arms same model. Signed also, eight plate glass are missing (same texturized glass would be available but clear not smoked) or personalized it to you taste. Measure 34 inches wide by 12 inches high also . Rod lenght is 16 inches. Please contact! 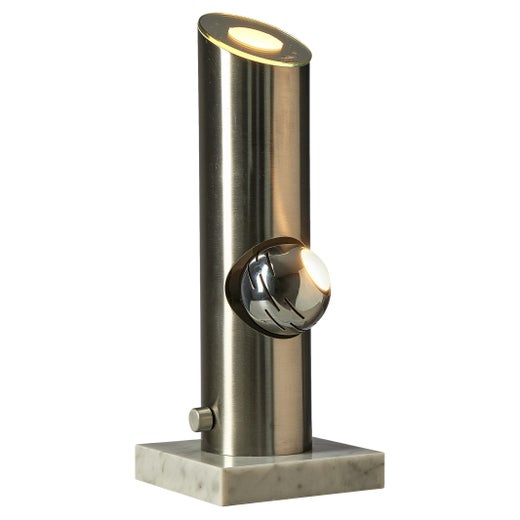 The lighting company Arredoluce opened in 1943, at the start of a golden era of modernist Italian design, and was born of the confluence of an eager entrepreneurial business spirit and a fresh, innovative, forward-looking creative atmosphere.

Angelo Lelii (1911–79), the founder of the Arredoluce, which was based in the Milanese district of Monza, was a gifted and at times brilliant designer. He had the insight to commission works from other greats of the day, including Gio Ponti, Vico Magistretti, the brothers Achille and Pier Giacomo Castiglioni and Ettore Sottsass Jr.

Lelii’s designs cover a broad aesthetic range. His most famous work, the Triennale floor lamp (circa 1952), is both elegant and practical, with three omnidirectional lighting booms attached to a central pole. His well-known ceiling light of 1954 — in which a conical canister bounces light upward off a lighting-arced enameled-aluminum sheet — is a piece of design poetry. And his 1962 Cobra table lamp has a wild, almost surreal look, featuring a sculptured rod of polished metal with a socket that, like his Eye floor lamp of the early 1960s, holds an eyeball-like directional bulb.

Arredoluce also placed few constraints on the creativity of the designers it employed from outside the company. The Castiglioni brothers’ Turbino table lamp of 1951, for example, is a remarkably early example of minimalist design. The company both fostered the tradition-minded aspect of Gio Ponti’s sensibility and produced several of his experimental pieces in Lucite in the 1950s; and Sottsass’s UFO table lamp of 1957, a sandwich of two plastic bubbled tablets on four legs, prefigures the look of his postmodern works for the Memphis Group by more than 20 years. From the stylish and utilitarian to the avant-garde, lighting by Arredoluce includes some of the most diverse, remarkable — and collectible — designs of the late 20th century.

About the Seller
5.0
Located in St- Leonard, Canada
Platinum Seller
These expertly vetted sellers are 1stDibs' most experienced sellers and are rated highest by our customers.
Established in 2014
1stDibs seller since 2016
284 sales on 1stDibs
Typical response time: <1 hour
More From This Seller

Arredoluce Twelve-Arm Lilly Chandelier
By Arredoluce, Angelo Lelii
Located in Hingham, MA
Twelve-arm brass chandelier in the style of Angelo Lelli for Arredoluce with original ivory enameled aluminum scallop-edged cones in the form of lilies of the valley, half oriented u...
Category

$9,422 / item
Ceiling Light by Angelo Lelii, Arredoluce, Italy, 1960s
By Arredoluce, Angelo Lelii
Located in New York, NY
Two long, crisscrossing brass arms with conic shades of off-white and black and spherical counterweights; held in the middle with a spherical screw clamp and suspended from a rod and...
Category

$18,500
Italian Midcentury Brass 3-Arm Chandelier Attr. to Arredoluce, Italy, 1950s
By Arredoluce
Located in Hagenbach, DE
A Sputnik chandelier made in Italy in the 1950s and attributed to Arredoluce. It is fascinating with its three brass arms, each of it with an E14 light bulb. The light requires 3...
Category

Published Italian Chandelier by Angelo Lelli for Arredoluce, circa 1950