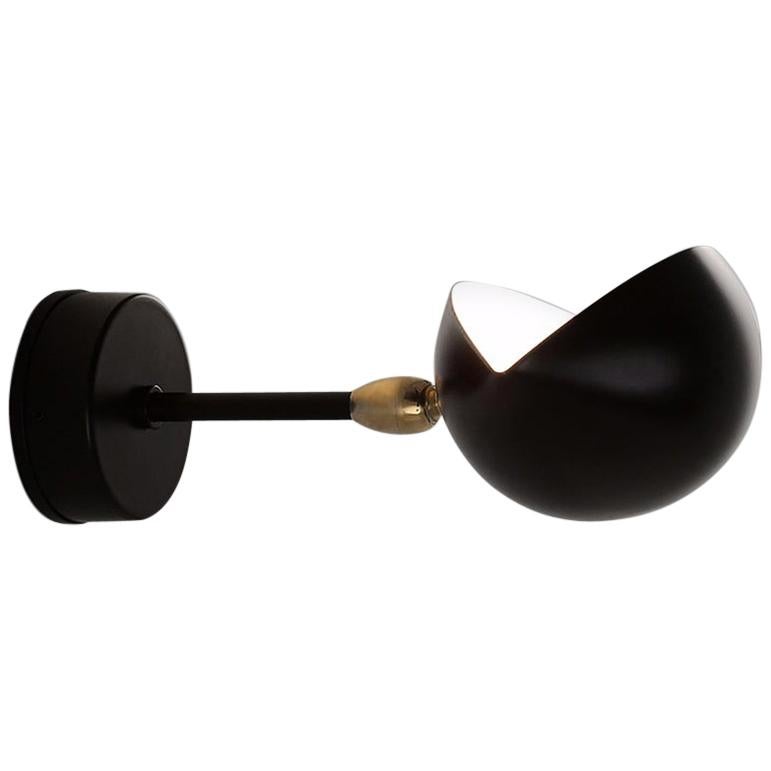 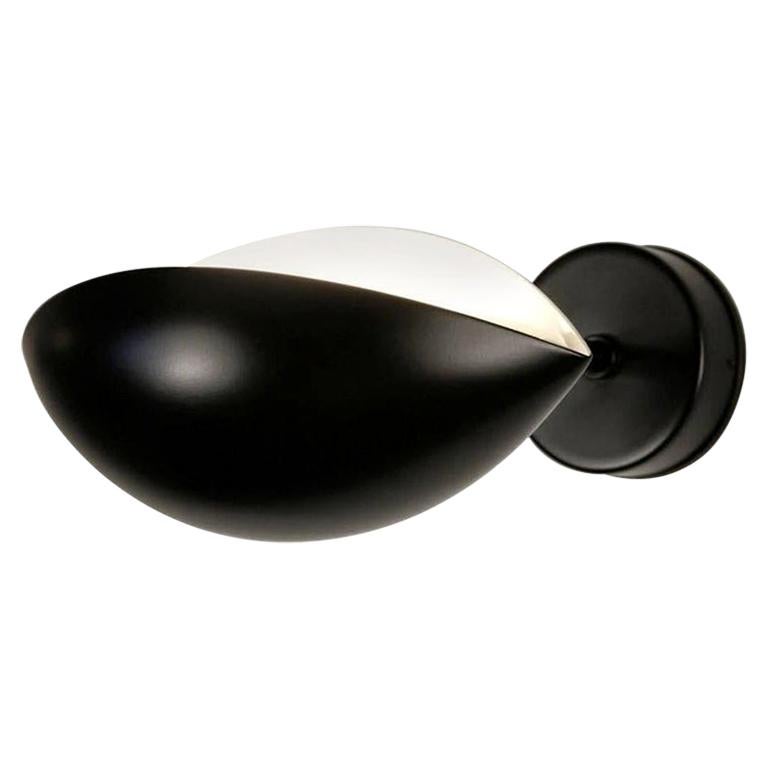 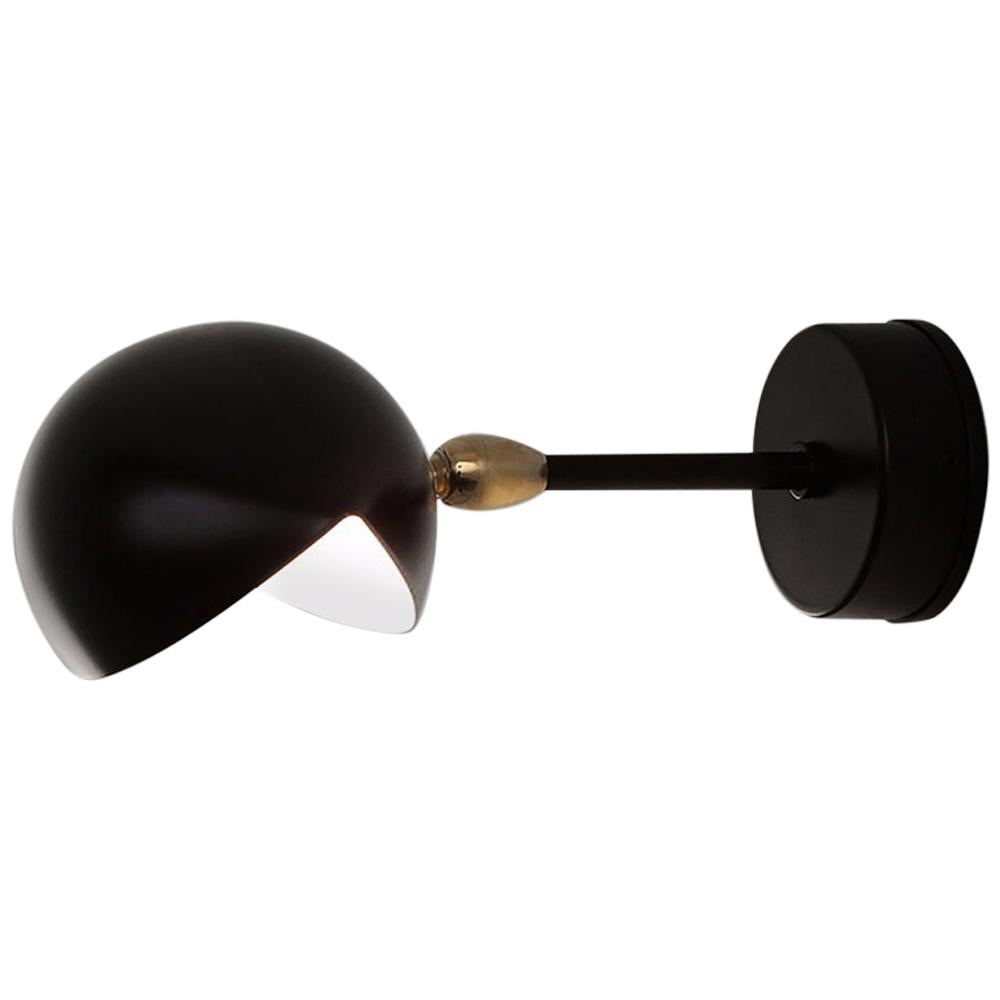 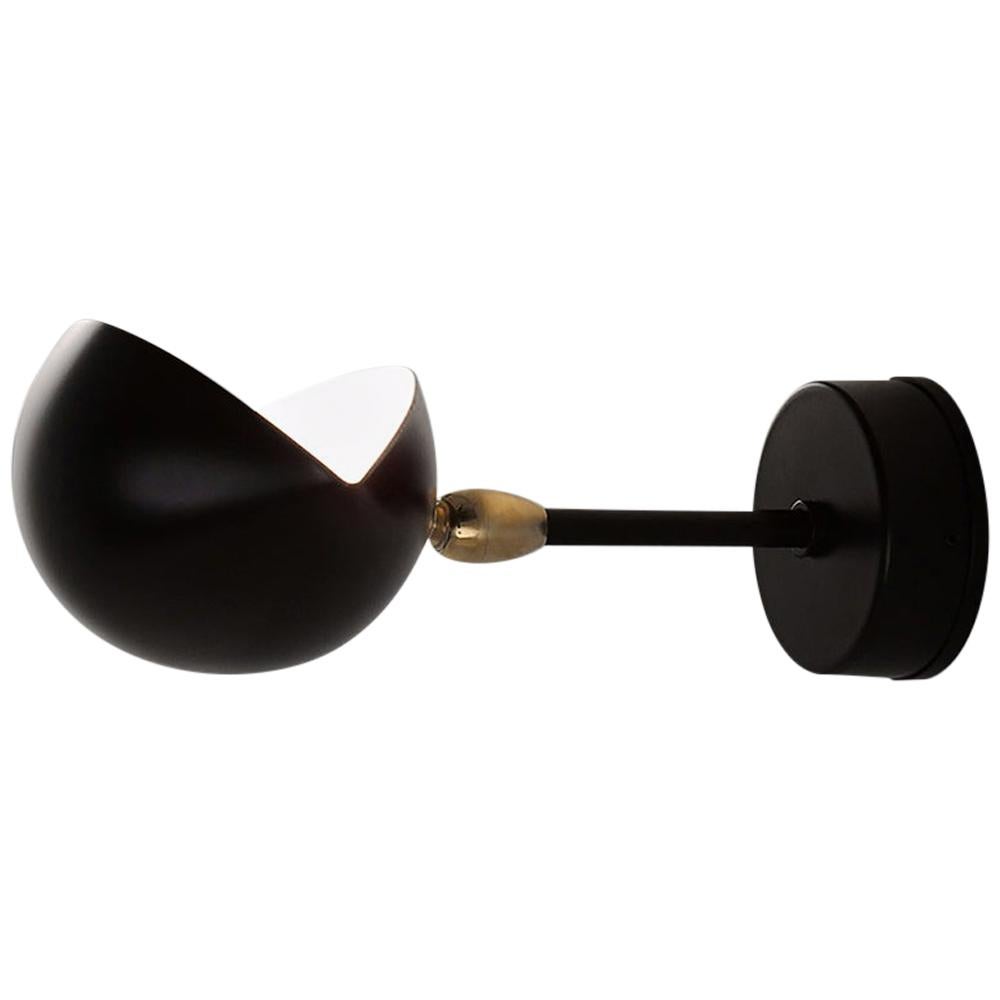 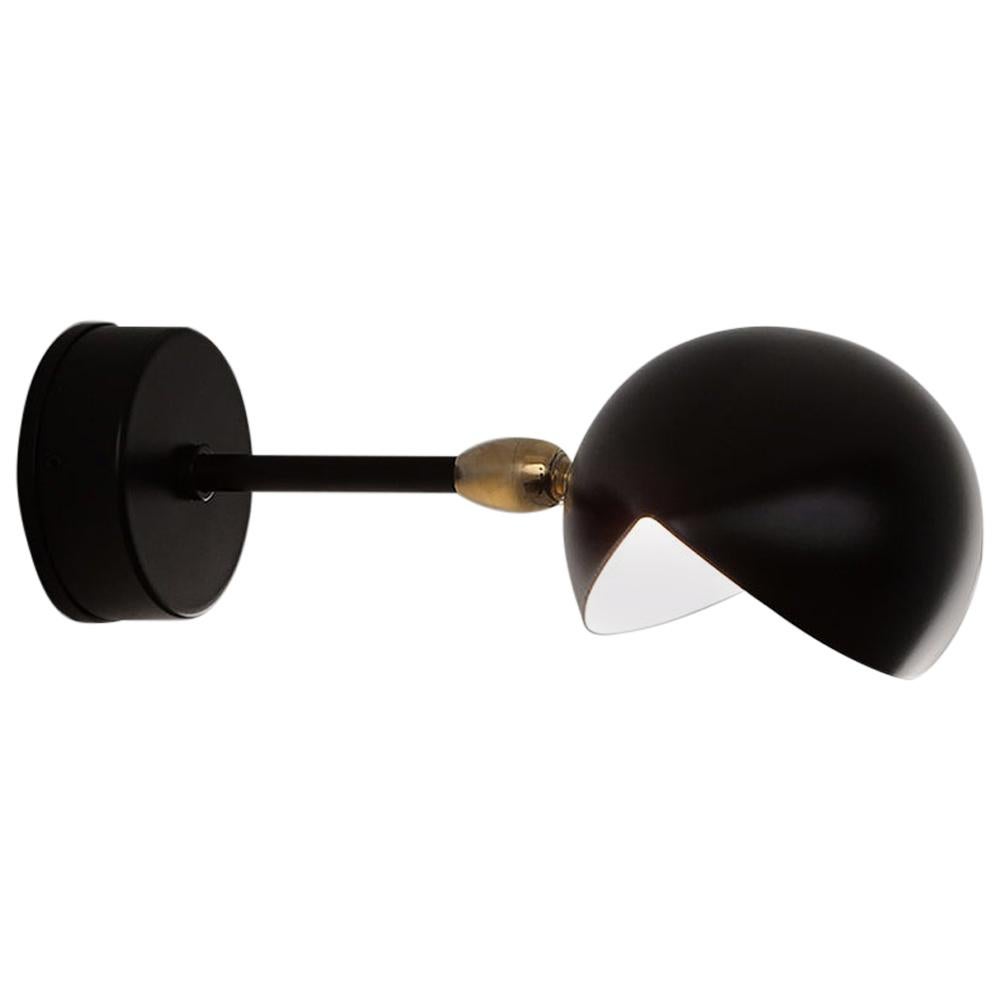 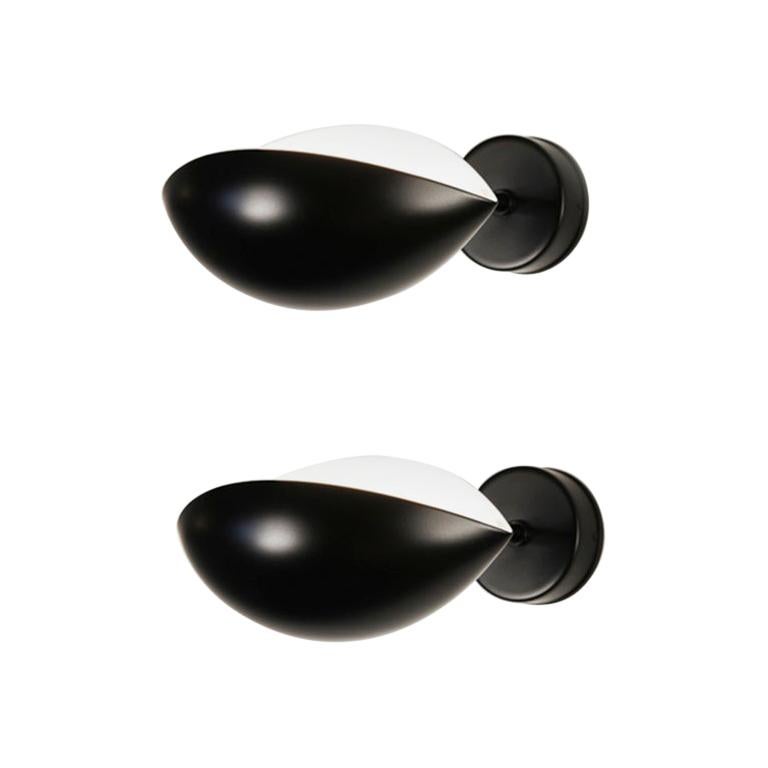 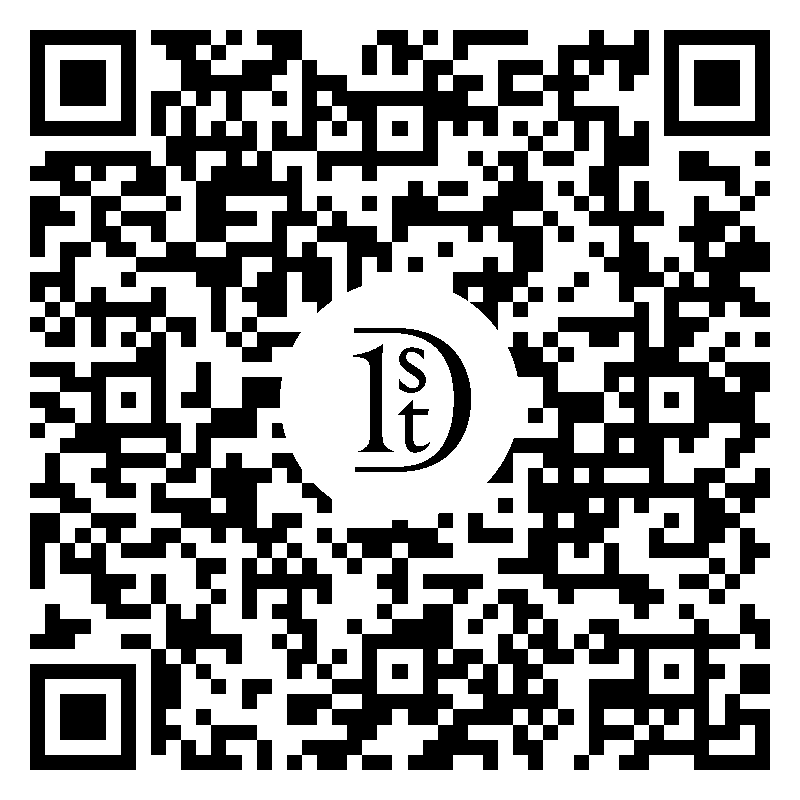 Sconce wall lamp model 'Eye Wall Lamp' designed by Serge Mouille in 1956. Manufactured by Editions Serge Mouille in France. The production of lamps, wall lights and floor lamps are manufactured using craftsman’s techniques with the same materials and techniques as the first models. Each lamp has a personal serial number and a specific certificate of authenticity when delivered. Materials and color: Body : Steel Swivel : Brass Reflector : Aluminium Black Lacquered - Always glossy white inside the lamp shades This model is also available in white. Dimensions: H 7.87 in. x W 10.23 in. x D 7.87 in. H 20 cm x W 26 cm x D 20 cm Technical details: CE : 42W max - E27 - 230V - 50Hz US : 60W max - E26 - 120V - 60Hz Indoor use and dry locations only. Serge Mouille (24 December 1922-1988) was a French Industrial designer and goldsmith. He is best known for his light fixture designs. After having worked a few years in the workshop of Gabriel Lacroix, he opened his own workshop in 1945 with the intention of creating silverware utensils. In 1953 he began researching and designing light fixtures. During this period he was also supervising the gold smithing department at l'École des Arts Appliqués. In 1955 he was inducted into the Société des Artistes Décorateurs ("the Interior Decorators' Society"). The following year, Steph Simon opened a design gallery at 145 Bd St Germain in Paris. Displaying the work of Charlotte Perriand and Jean Prouvé, the gallery soon also featured the work of Serge Mouille, Isamu Noguchi and Jean Luce. The designs of these artists soon become more widely known thanks to orders placed by institutions such as, Cité universitaire d’Antony, University of Strasbourg, University of Aix-Marseille and Centre d’essais en vol de Brétigny. Serge Mouille suffered from tuberculosis for many years and in 1959 he was forced to suspend his design activities and undergo treatment. In 1961, thanks to the Société de Création des Modèles, he was able to exhibit his latest light fixture designs at the trade show Salon des arts ménagers. These designs combined the concepts of fluorescence and incandescence. Production of his light fixtures stopped definitively in 1961. Serge Mouille remains famous primarily for his Minimalistic designs and use of uniformly black painted metal materials. His wall-mounted spot light fixture with articulated arms is typical for his discrete, yet highly functional designs. 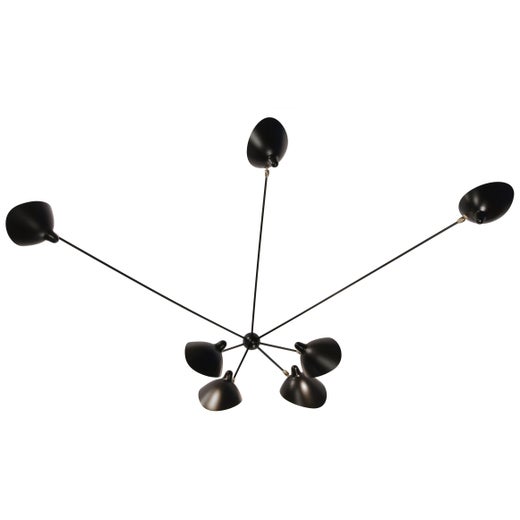 Instantly recognizable by their long slender armatures and domed, ovoid shades, the best-known floor lamps and other lighting fixtures of Serge Mouille have become emblems of the organic design of the mid-20th century. Along with Jean Prouvé, Mathieu Matégot and others, Mouille brought a fresh, modern aesthetic to metalwork, one of the most tradition-bound mediums in the decorative arts.

Mouille (pronounced: MWEE) was born to a working Parisian family. At age 15, he took up studies in the metalworking atelier of that École des Arts Appliqués, under the tutelage of the goldsmith and sculptor Gabriel Lacroix. After graduating, in 1941, Mouille worked in Lacroix’s studio and began teaching at his alma mater four years later.

In the early 1950s, bothered by the preponderance of new Italian lamps and chandeliers on the market and consumed with the belief that fixtures by Gino Sarfatti and others were unnecessarily complex, Mouille opened a lighting-design workshop. He quickly won commissions from several French schools and libraries. In 1956, the influential Paris gallerist Steph Simon — who also promoted Prouvé, Charlotte Perriand and Isamu Noguchi — began to show Mouille designs, introducing his work to private collectors. Mouille would continue making handcrafted lighting fixtures at a slow but steady pace until 1964, when he stopped working to begin a long course of treatment for tuberculosis. When it was completed, Mouille returned to teaching at the École des Arts Appliqués for the remainder of his career.

With the biomorphic shades and long armatures of his fixtures, Mouille created one of the most engaging and idiosyncratic lighting aesthetics of his time. Though often described as “insect-like,” his pieces have more in common with the fluid, buoyant forms in the paintings of Jean Arp. (Mouille designed several cylindrical or columnar lamps; though highly collectible, those are interesting outliers in his body of work.)

As with Prouvé’s folded metal forms and Matégot’s perforated steel, Mouille brought a novel lightness and energy to metal furnishings. Since Mouille’s designs found renewed popularity in the early 2000s, licensed re-editions of his pieces are being produced. The disparity in price between vintage and current-day Mouille pieces is great. Older works — identification tip: the interior white reflective enameling has a yellowish cast — cost $20,000 to $40,000, and newer pieces go for 10 to 20 percent less than that. As you will see on these pages, Serge Mouille created icons of 20th century design — at once sleek, suave and friendly — that belong in any modern decor.

About the Seller
4.9
Located in Barcelona, Spain
Platinum Seller
These expertly vetted sellers are 1stDibs' most experienced sellers and are rated highest by our customers.
Established in 2015
1stDibs seller since 2015
1,082 sales on 1stDibs
Typical response time: 2 hours
More From This Seller

Serge Mouille Eye Sconce
By Serge Mouille
Located in Brooklyn, NY
This sconce is a certified re-edition, produced by the family of Serge Mouille on the site of his original workshop. The Mouille “œil” or eye sconce is named for the shape of the sh...
Category

$3,195 / item
"Flame" Wall Sconces by Serge Mouille
By Serge Mouille
Located in Brooklyn, NY
An elegant twist of metal results in a lamp that illuminates upwards while creating playful shadows through the elongated metal with tapered ending. Totally unique, this lamp adds a ...
Category

$3,195
Conche Wall Sconce by Serge Mouille
By Serge Mouille
Located in Brooklyn, NY
Curved and fluid, simple in design, the Conche sconce embodies the same qualities as its name sake. The lamp rests on a small stem which allows the shade to tilt and move to the idea...
Category

$3,195
Wall Sconce 4 Rotating Arms by Serge Mouille
By Serge Mouille
Located in Brooklyn, NY
This sconce is designed so that one short and one long arm rotate at the same time creating a unique effect with illumination. Shades pivot in place. Switches located on mounting pla...
Category

$23,205
Saturne Sconce by Serge Mouille
By Serge Mouille
Located in Brooklyn, NY
A partial cut allows the outer edge to bend revealing a sculpted ring encircling a central cone reflector to both diffuse and project light into the room. The result is reminiscent o...
Category

$3,250 / item
Serge Mouille Spider Sconce Five Arms in Black
By Serge Mouille
Located in Brooklyn, NY
This sconce is a certified re-edition, produced by the family of Serge Mouille on the site of his original workshop. A larger sconce with two identical long arms and three shorter a...
Category

$10,650
Spider Sconce 7 Arms by Serge Mouille
By Serge Mouille
Located in Brooklyn, NY
The largest of the spider sconces, this lamp is not only unique in its design but equally impressive in an installation where it is the focal point of the room. Two identically long ...
Category

$13,660
Serge Mouille Two-Arm Rotating Sconce
By Serge Mouille
Located in Brooklyn, NY
This sconce is an authorized Re-edition, produced by Serge Mouille's family at the site of his original workshop. The long straight arm is 69 inches, allowing for illumination de...
Category