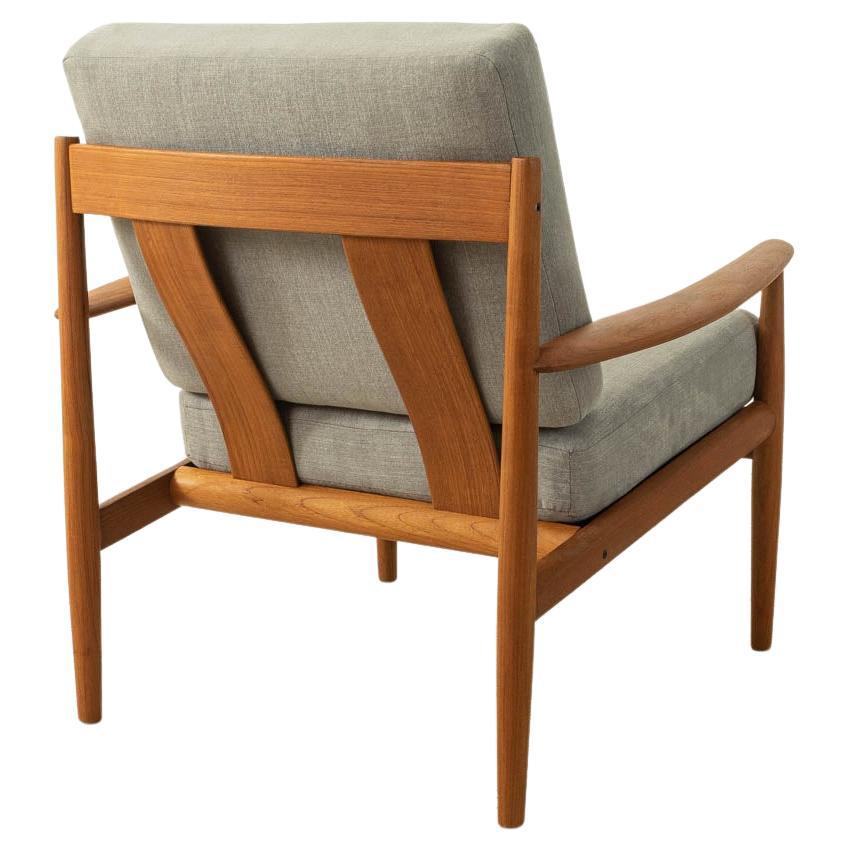 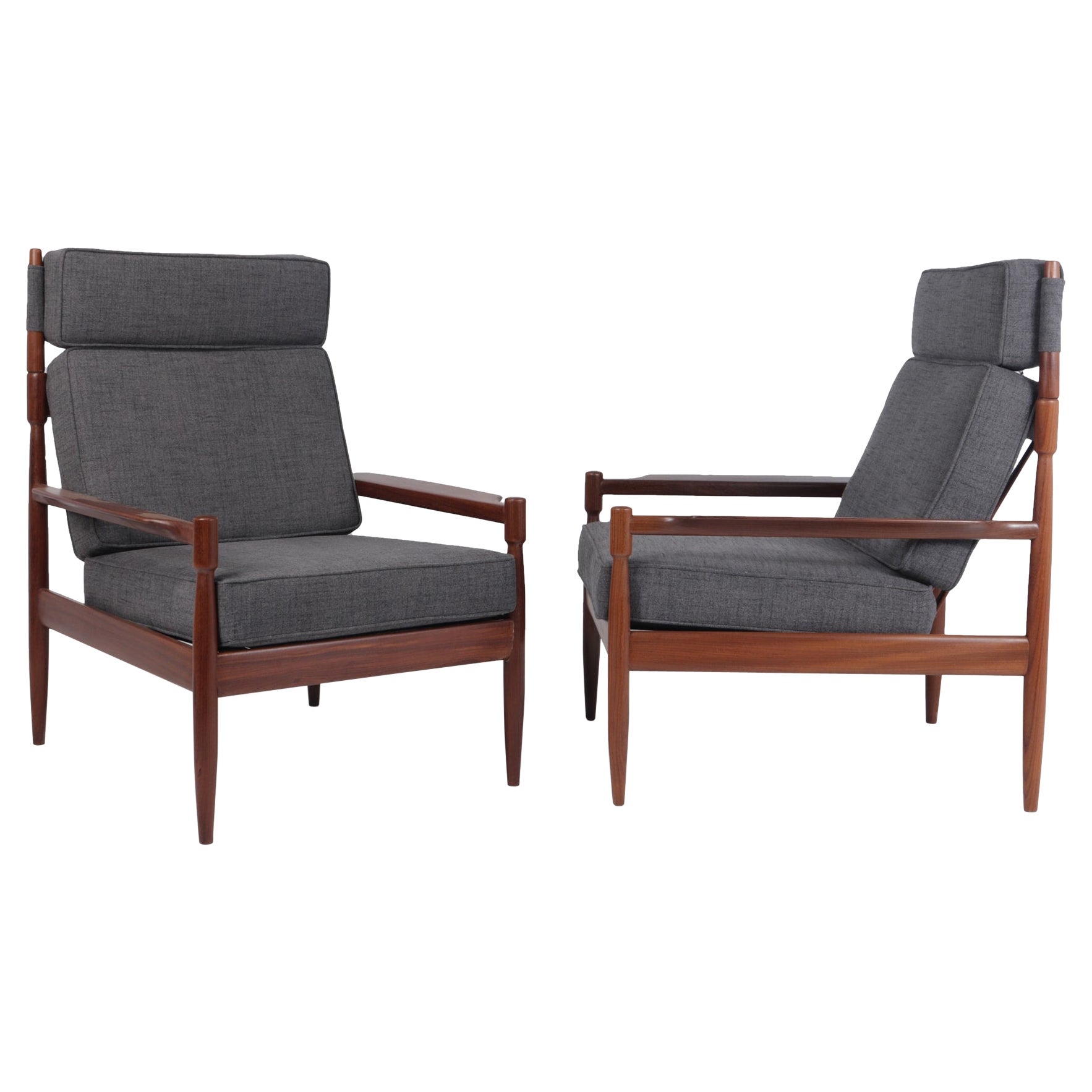 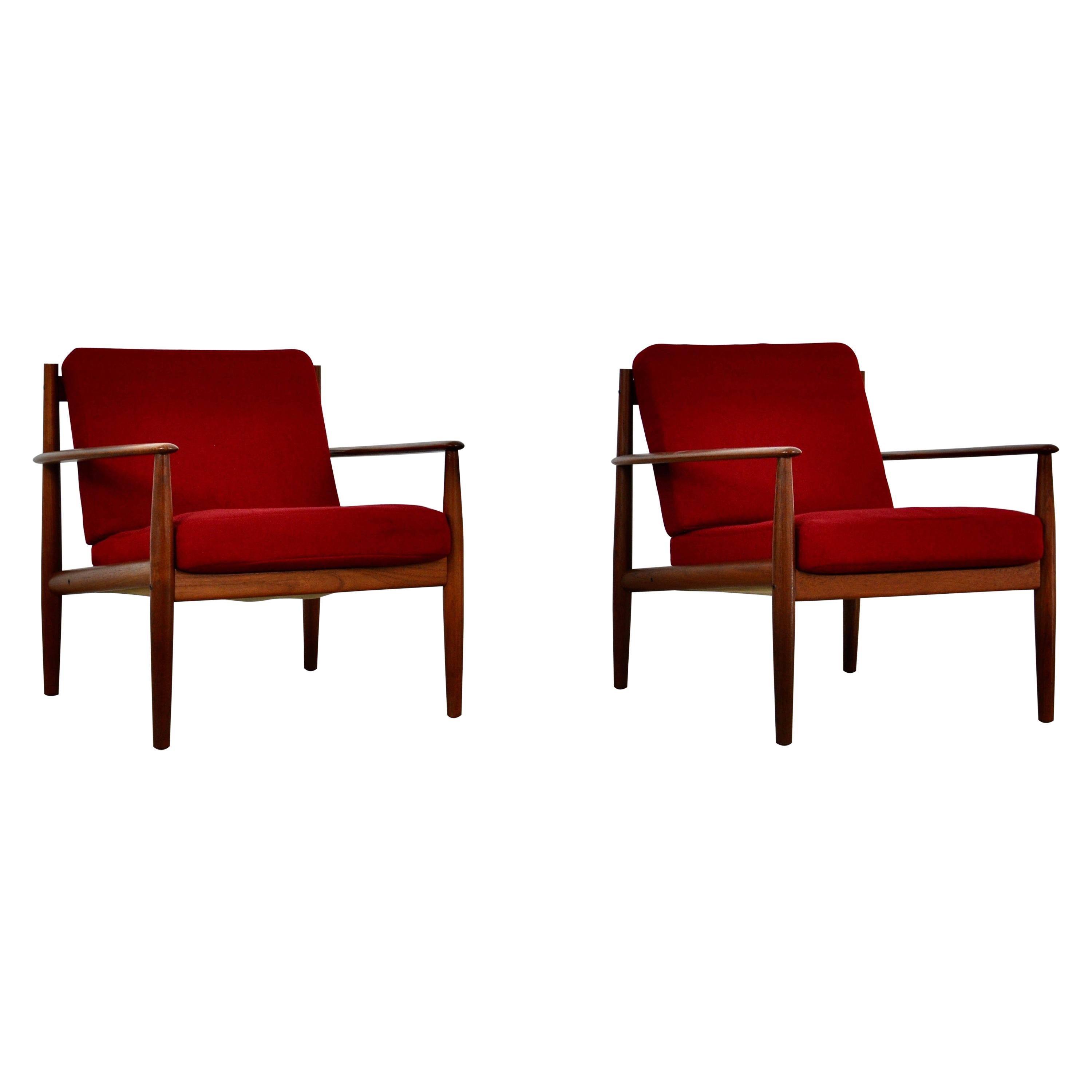 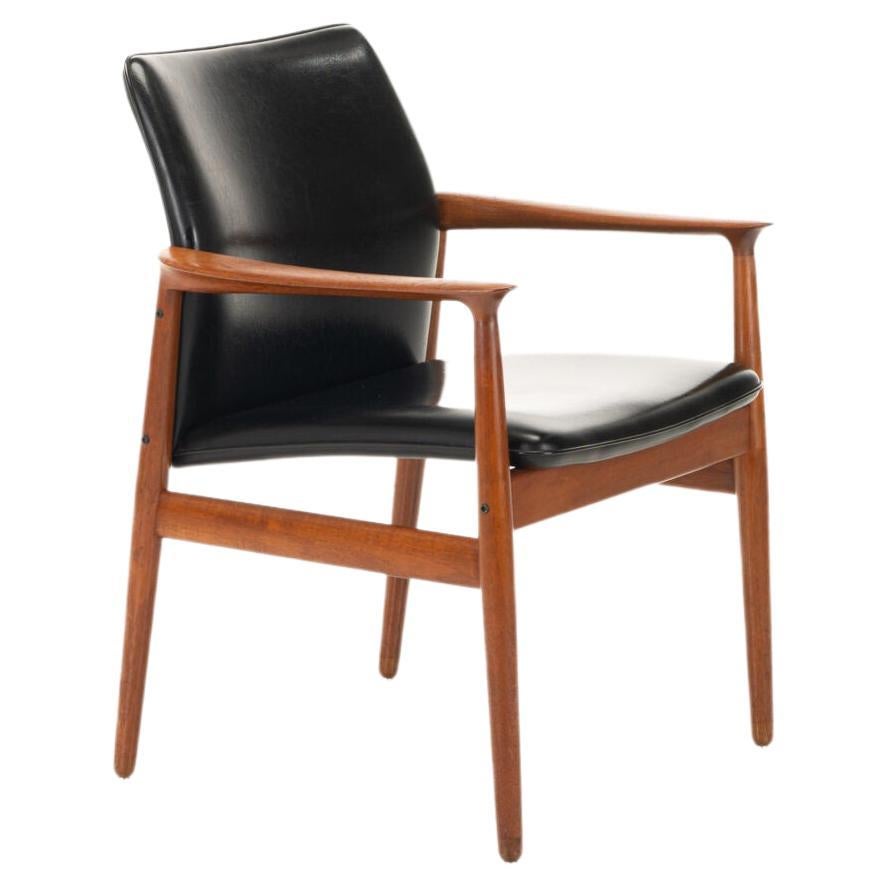 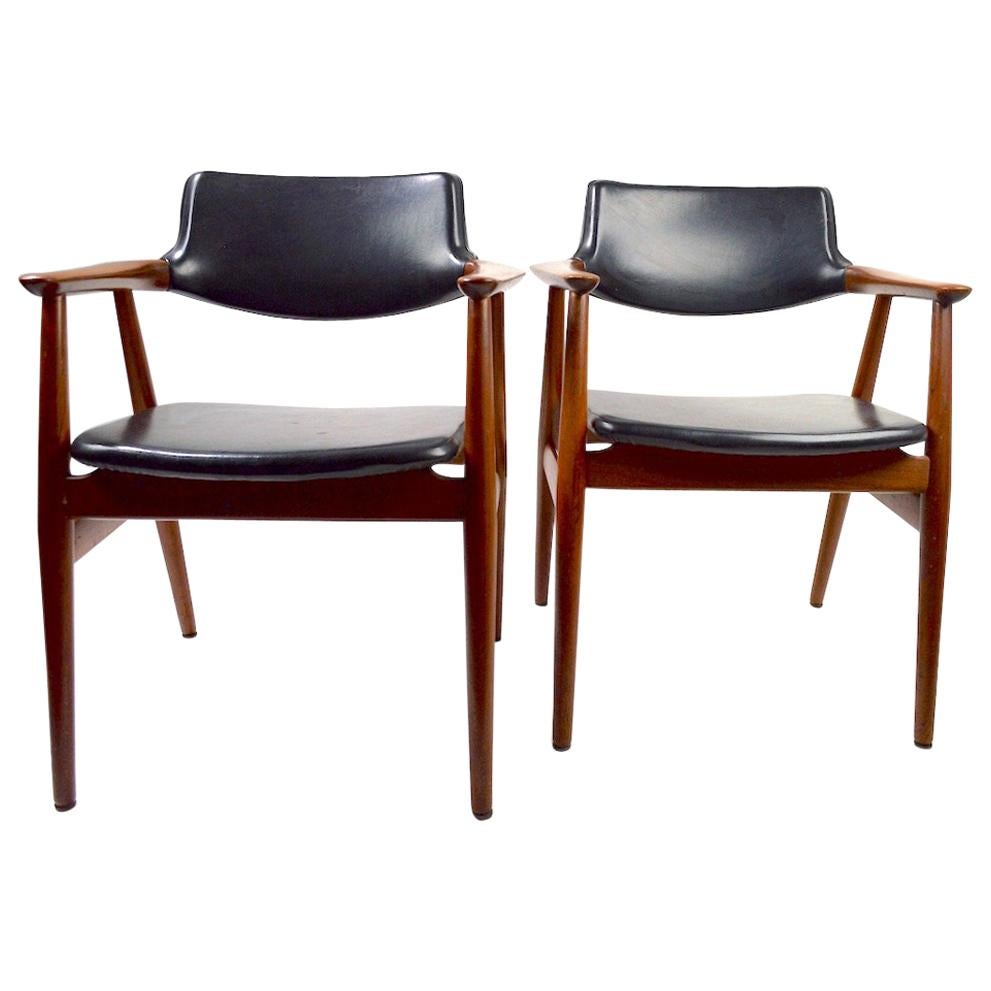 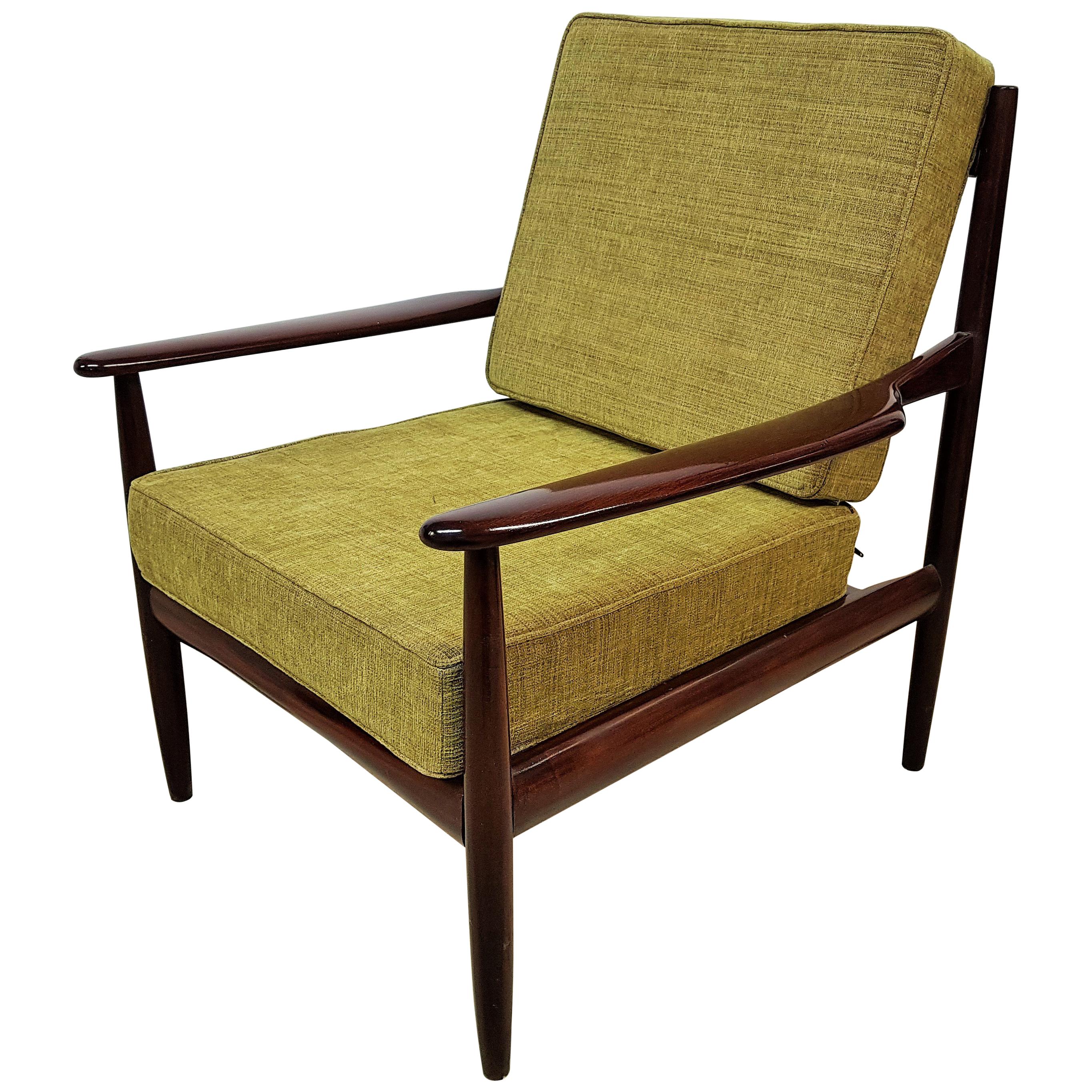 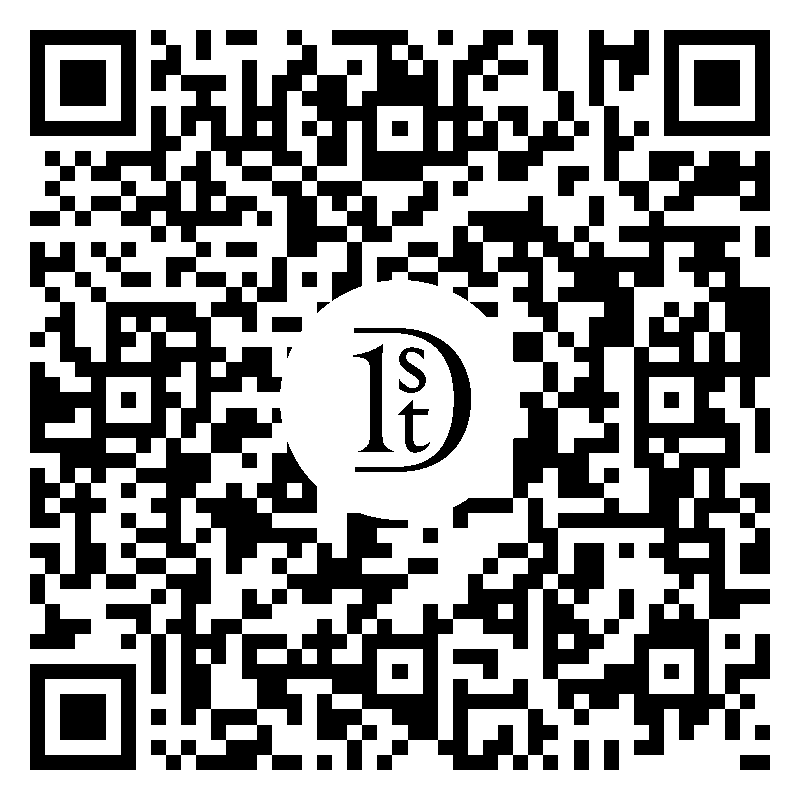 This Teak armchair was designed by Grete Jalk in 1963 and produced by renowned cabinetmakers France and Son. The chair has been restored where necessary and been fully re finished, this has had replacement cushions and covered in charcoal grey wool fabric makers label under seat Age: 1960 Style: Mid-Century Modern Material: Teak Wool Origin : Denmark Condition: Excellent Restoration; Fully re finished with new upholstery Dimensions: 76 H x 79 W x 76 D cm. 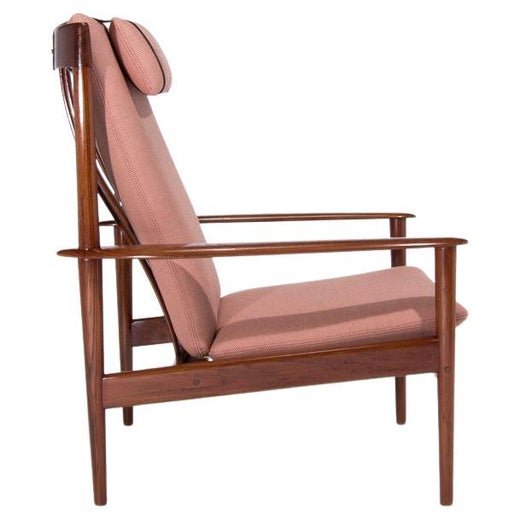 What would the reputation of mid-century Danish furniture be without legendary female designer Grete Jalk? A pioneer of Scandinavian modernism, Jalk sought to craft furniture that was both cost-efficient and high in quality, each piece made for the evolving interiors and design sensibilities of the day. She continues to be celebrated for her sleek and minimal armchairs, lounge chairs, coffee tables and more.

Jalk was born in 1920 in Copenhagen. She studied at the Drawing and Applied Art School for Women before enrolling at the Royal Danish Academy of Fine Arts, where famed designer Kaare Klint was among her instructors. Jalk completed her studies in 1946 and began a cabinetmaker apprenticeship. That same year, she won an award at the Copenhagen Cabinetmakers’ Guild competition. Jalk also participated in the 1951 Milan Triennial exhibition, where her designs earned more acclaim and attention.

In 1954, Jalk opened her own design studio and began working with major Danish furniture manufacturers like Fritz Hansen and Glostrup Møbelfabrik. She found inspiration in plywood experiments carried out by Alvar Aalto and Ray and Charles Eames, and she quickly became known for her pared-back, expressive designs, which touted fluid forms and were made of alluring woods such as teak and rosewood.

Jalk’s best-known work is the 1963 GJ chair, a collaboration with cabinetmaker Poul Jeppesen that won first place in the Daily Mail International Furniture Competition. Made of two pieces of molded teak plywood, the sculptural GJ lounge chair is part of the collections of the Museum of Modern Art and Metropolitan Museum of Art.

While creating her iconic furniture designs, Jalk wore many other hats. She taught at the Royal Danish Academy of Fine Arts and served as an editor of the Danish design magazine Mobilia from 1956–62 and 1968–74. In 1974, Jalk curated a traveling design exhibition for the Danish Foreign Ministry and was named a member of the Danish Design Council in 1981. She was also the editor of 40 Years of Danish Furniture Design: The Copenhagen Cabinet-makers' Guild Exhibitions 1927–1966, published in 1987.

Jalk passed away in 2006 at the age of 86. In 2008, Danish furniture manufacturer Lange Production was granted exclusive rights to reproduce the GJ chair, a design as fresh and original today as ever.

Grete Jalk Teak Armchair, 1960s Denmark, Manufactured by Cado
By Cado, Grete Jalk
Located in Neuss, NW
Classic armchair by Grete Jalk for Cado. High-quality solid wood frame made of teak. The original spring cores of the seat and backrest have been reupholstered and covered with a hig...
Category

$2,114
Danish Teak Armchairs by Grete Jalk for France & Søn, 1960s
By Grete Jalk
Located in Lasne, BE
Pair of armchairs in wood and red fabric. Measure: Seat height: 42cm. Wear due to time and age of the chairs.
Category