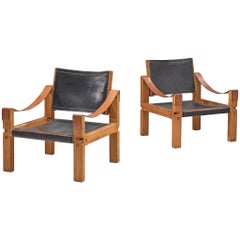 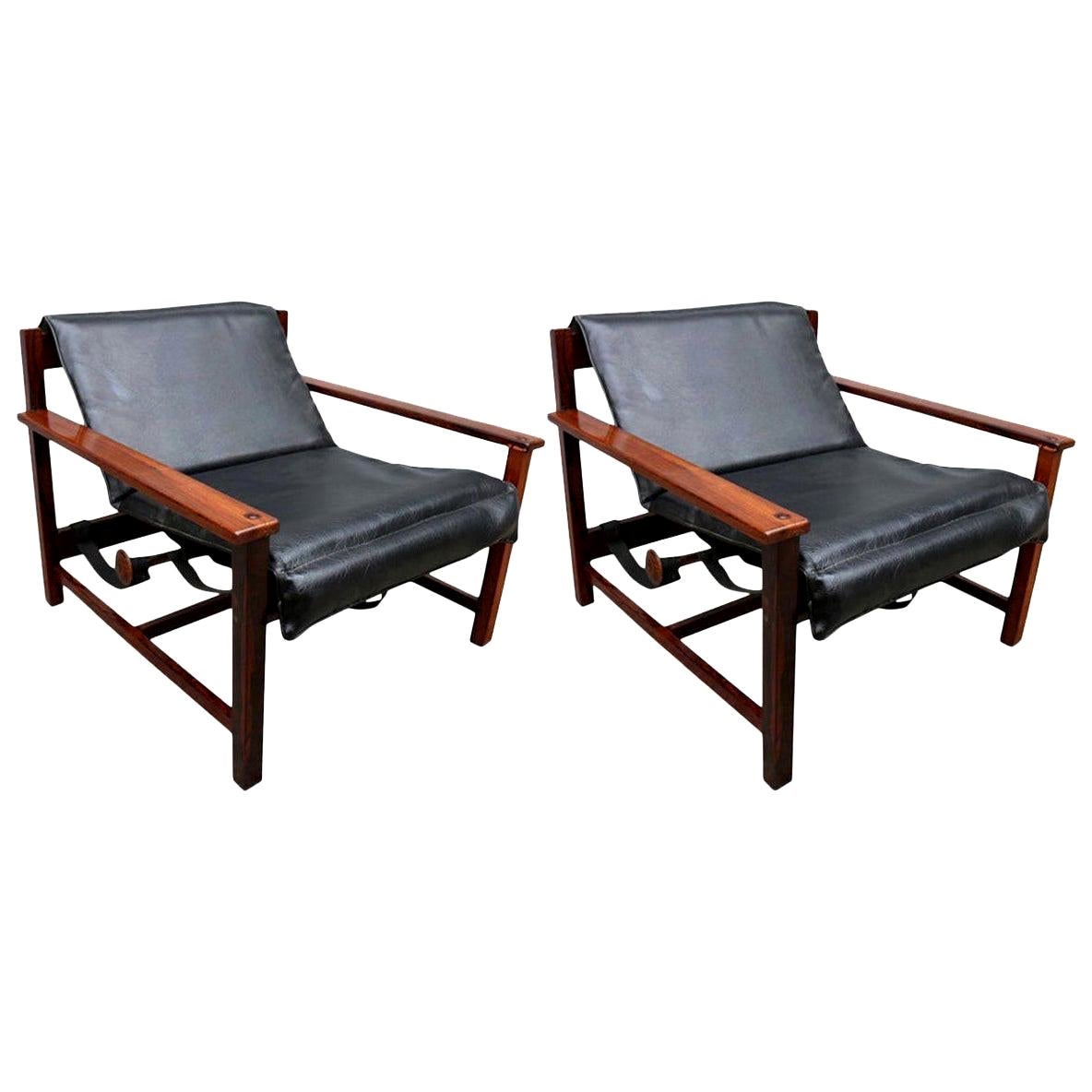 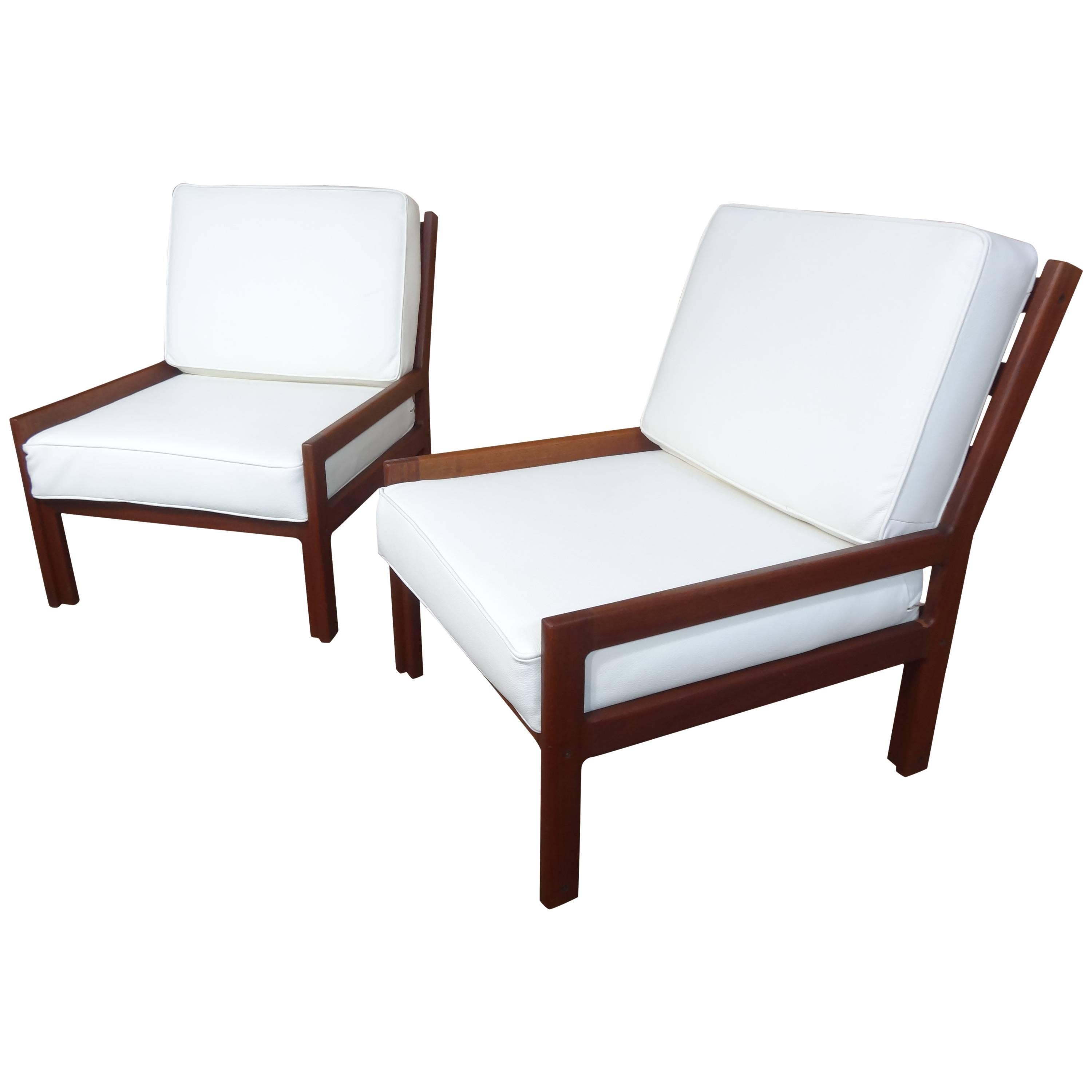 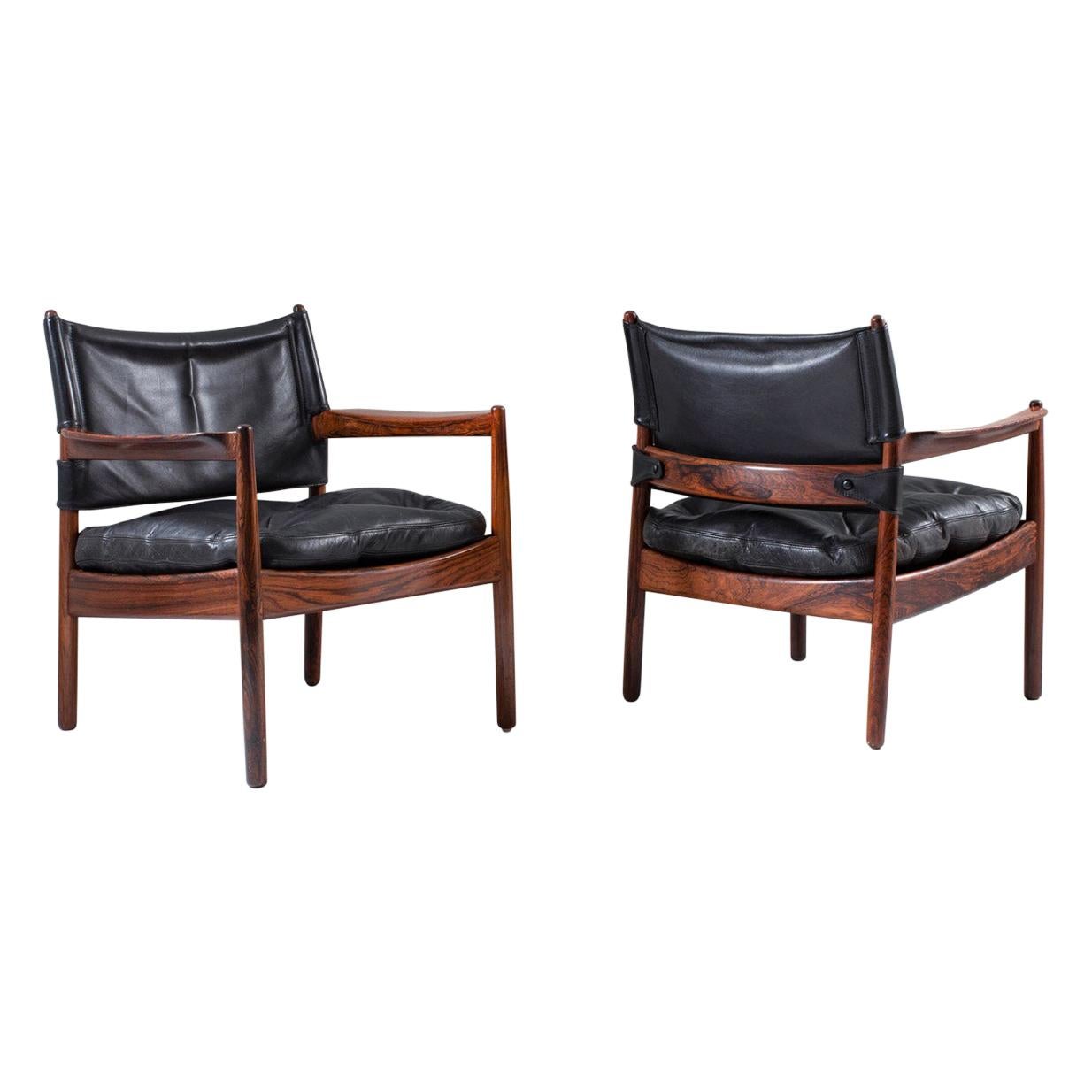 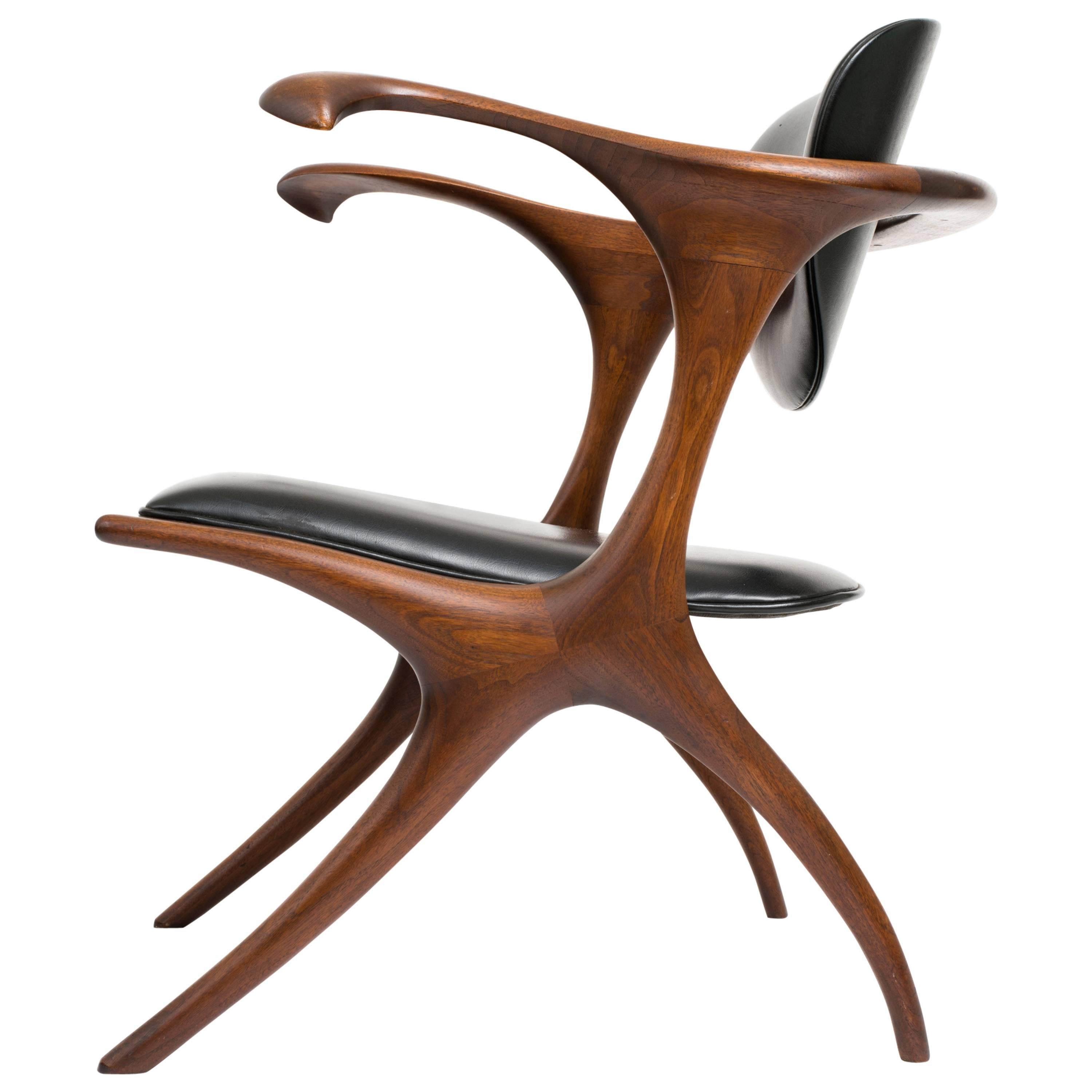 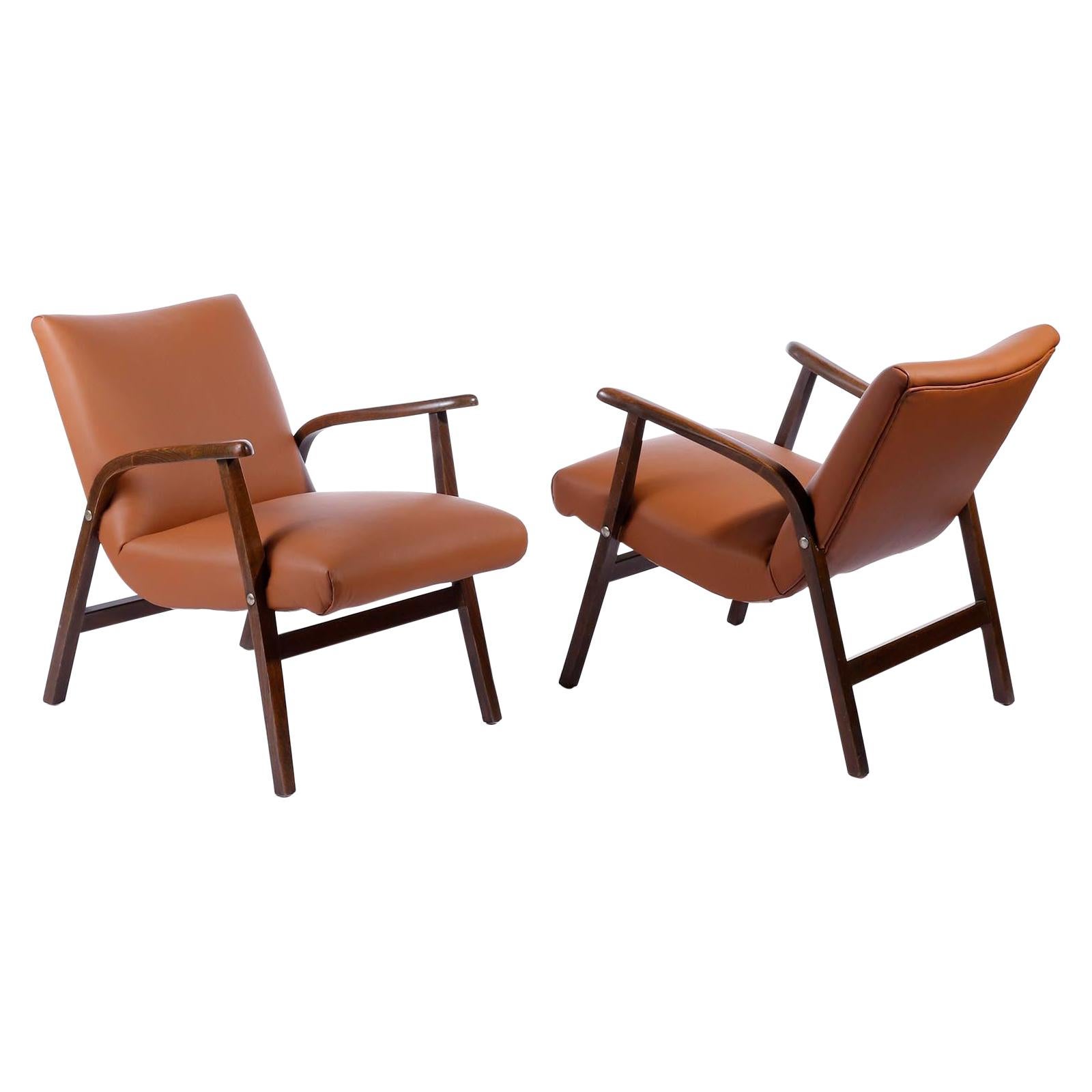 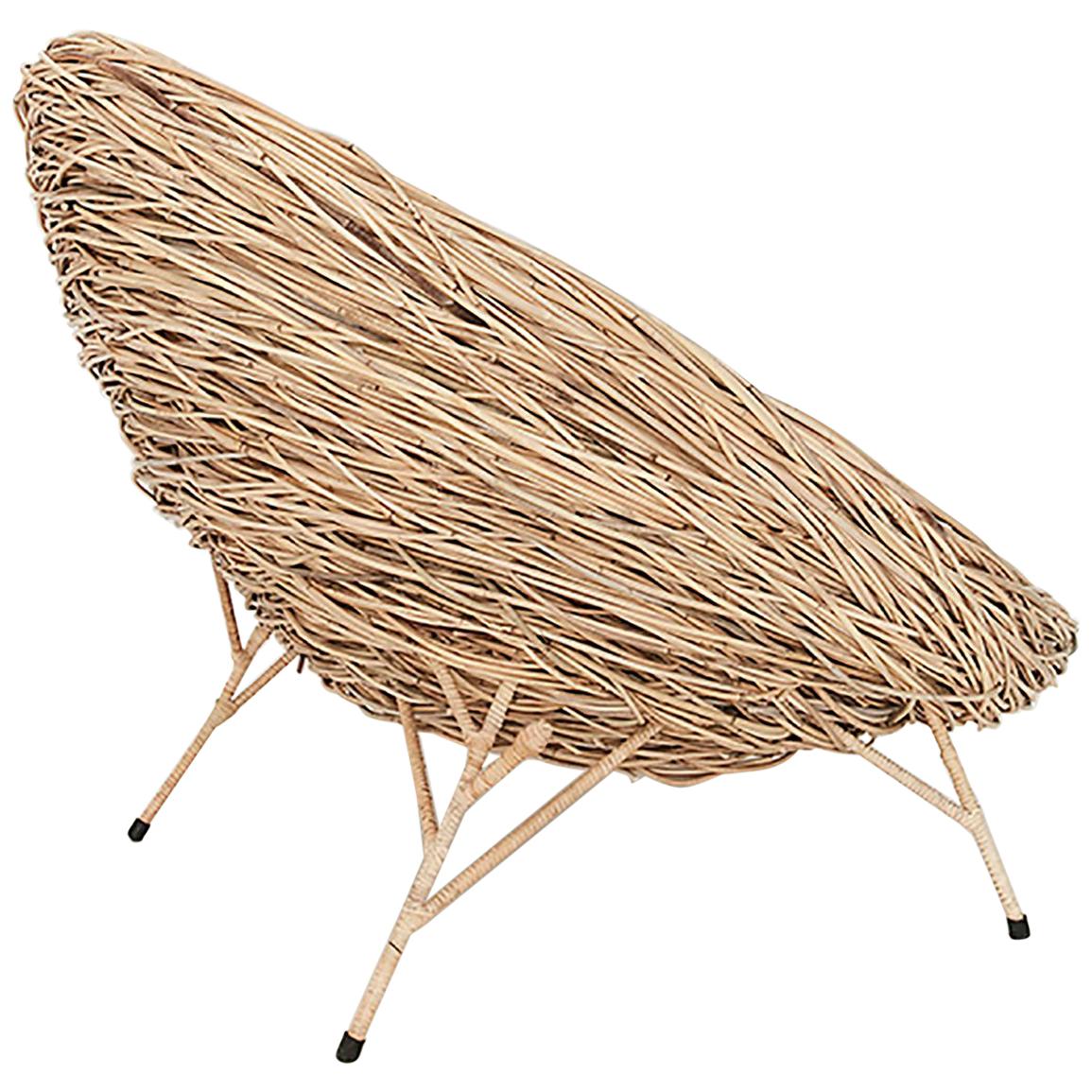 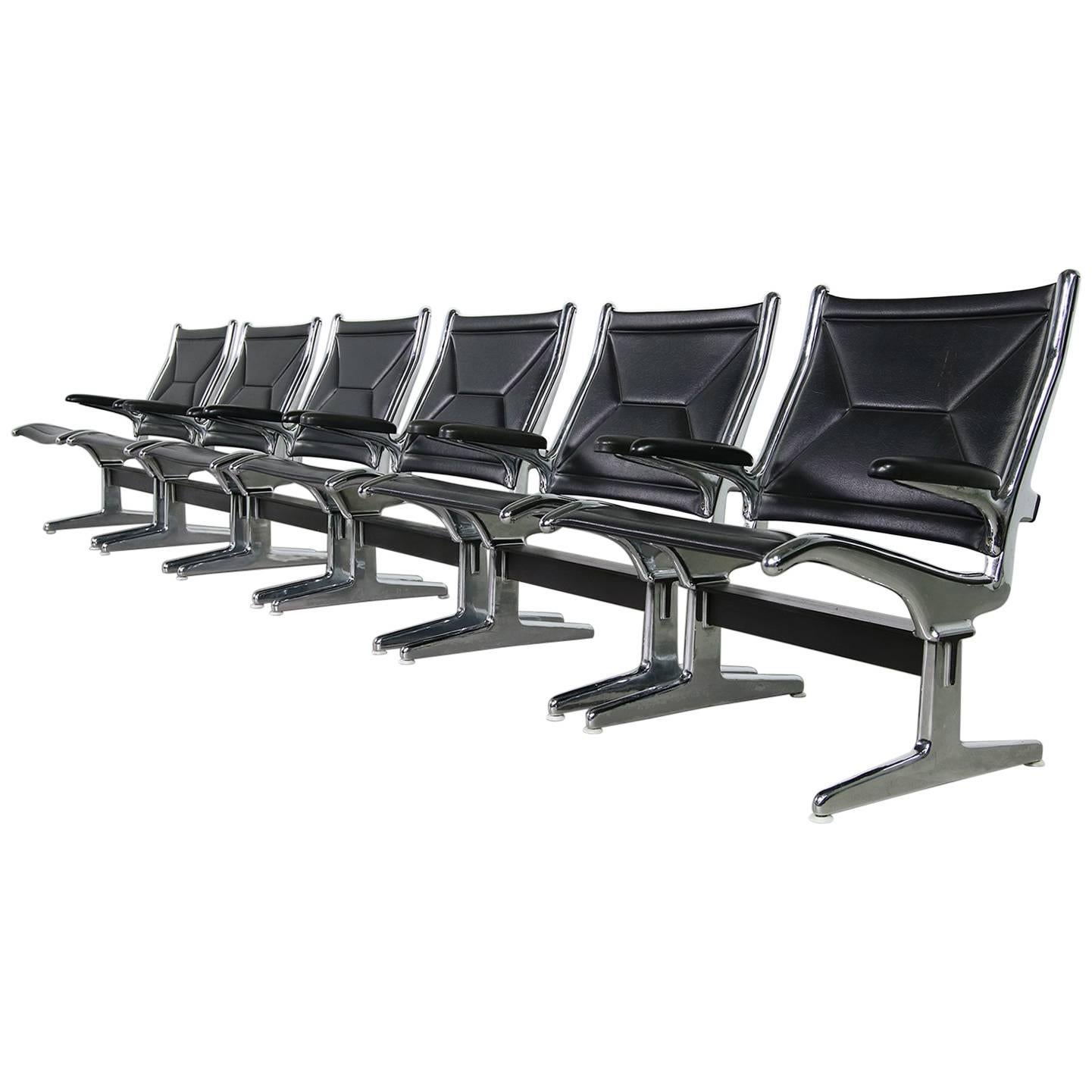 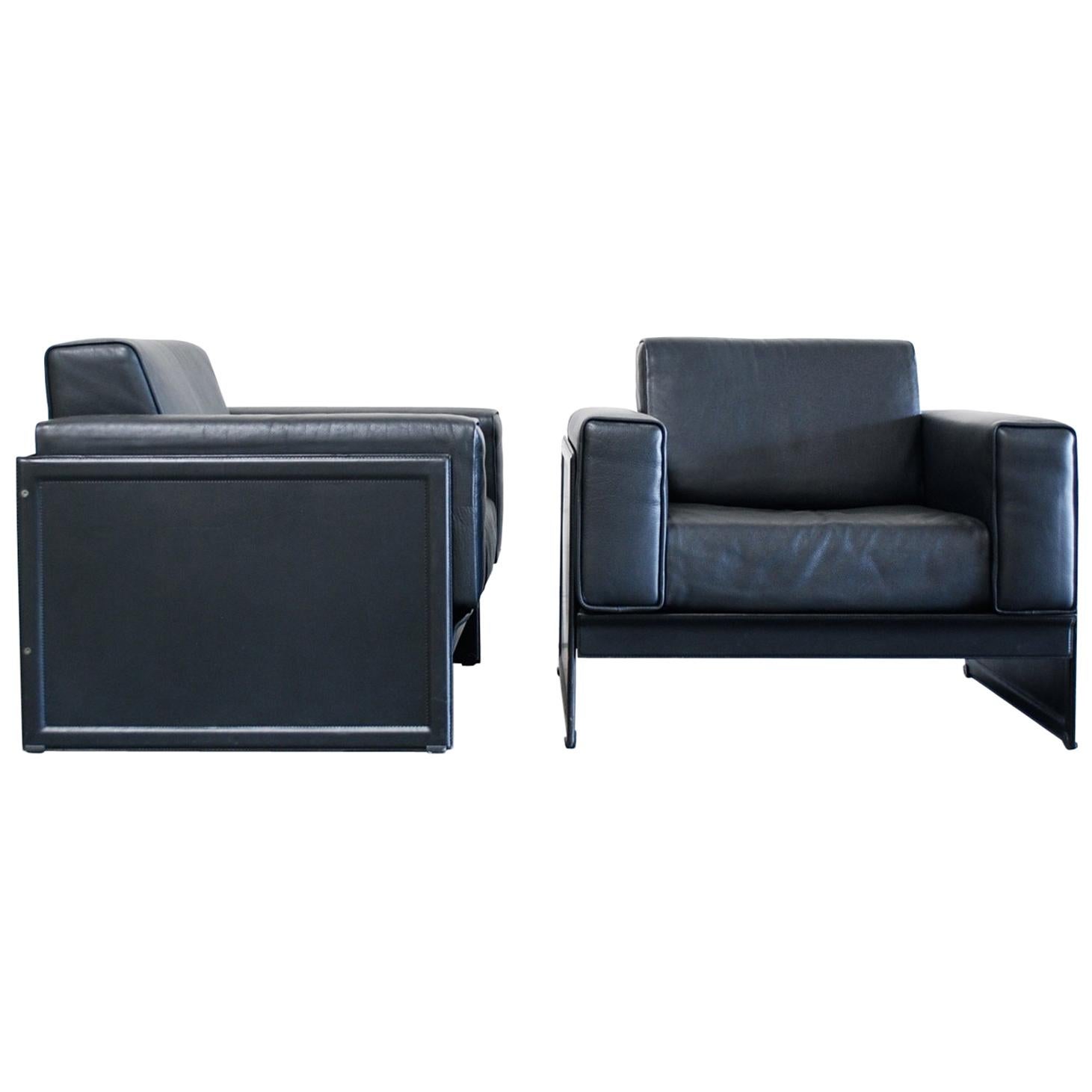 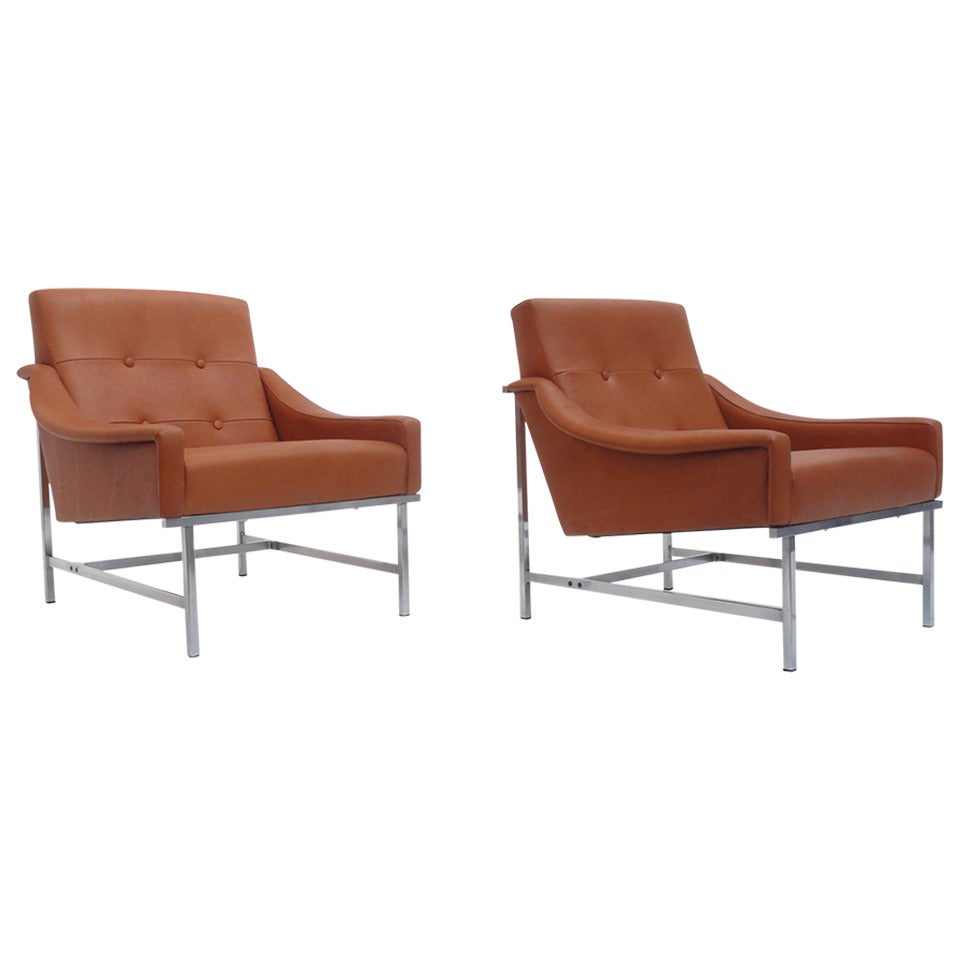 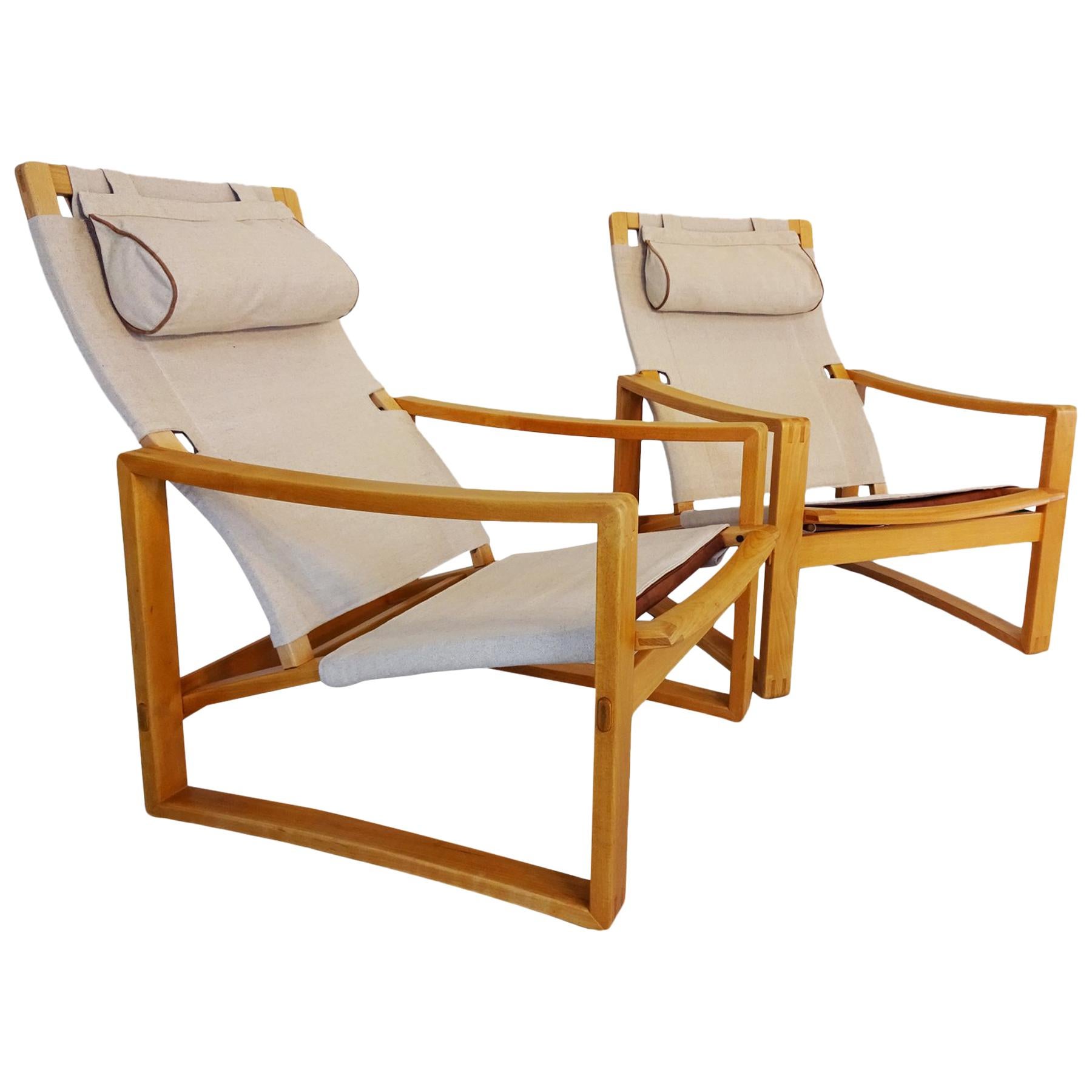 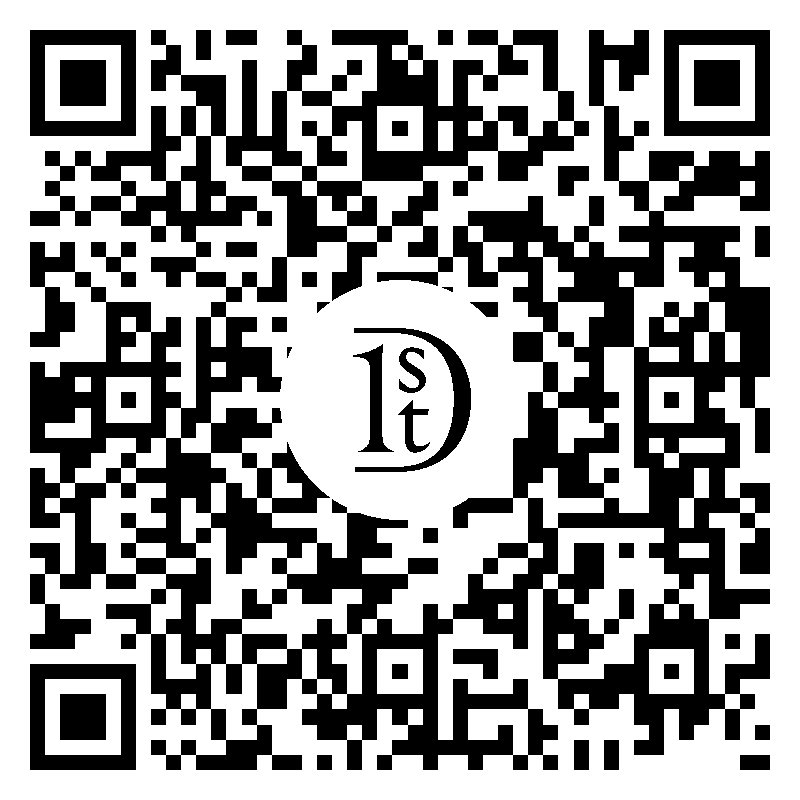 Pierre Chapo, two armchairs, model S10X, elm and leather, France, circa 1964. This set of two lounge chairs is designed by Pierre Chapo. These comfortable armchairs in solid elmwood and black saddle leather of this specific set features a wonderful and rich patina. This set is therefore especially interesting as the ageing of the leather creates a sculptural feeling. The chairs are based on Chapo's 48 x 72 assembly principle. The S10 chair is most likely a reference to Corbusier's LC2. It was a very popular chair when it first came out. The chair can be fully dismantled and is a wonderful example of chair with a complex assembly yet with a sober, modest aesthetic. The entire structure is held together by the tension of the leather seat on the frame. An expressive patina is visible on the natural leather. The sincere appearance and smart construction this model shows, characterizes the work Pierre Chapo is renowned for. The straight lines of the sturdy rectangular wooden frame nicely contrast to the thin back and curved straps of the armrests.  Pierre Chapo (1927-1987) was born in a family of craftsmen and trained as an architect in Paris. After spending many years traveling through south and North America he and his partner Nicole set up Société Chapo, an architectural research consultancy and interior design firm. In 1958 they opened their famous gallery at 14 Boulevard de l'Hopital. Chapo's work originated by means of special commissions that could later be adapted to universal needs. Chapo was inspired by Frank Lloyd Wright's balanced lines, Corbusier's research on proportions and the Minimalist tendencies of Bauhaus. Societe Chapo was a design workshop and gallery in one where Nicole presented ceramics, textiles and other design by the great designers of the day. The three principles that motivated Pierre Chapo were 'material, form, and function.' He measured his furniture by means of golden ratio and used elmwood as his preferred material. Please note that the price is per item, not per set.

Recognized Seller
These prestigious sellers are industry leaders and represent the highest echelon for item quality and design.
Diamond Seller
These expertly vetted sellers are 1stDibs' most experienced sellers and are rated highest by our customers.
Established in 2006
1stDibs seller since 2012
4,165 sales on 1stDibs
Typical response time: 1 hour
Associations
20th Century Specialists

$9,700 / item
Pair of Lounge Chairs in Patinated Dark Green Leather
Located in Waalwijk, NL
Armchairs, in leather and wood, Italian, 1960s. Pair of lounge chairs in leather. The leather upholstery of these easy chairs shows a beautiful patina, especially on the armrests, ...
Category

$4,155 / set
Early and Rare Evert Sodergren Sculptured Chair, circa 1955
Located in Brooklyn, NY
The 'Sculptured' chair was originally designed in 1953 by Pacific Northwest master craftsman and cabinetmaker, Evert Sodergren, and it is the crown jewel of his oeuvre which spanned ...
Category

$5,850 Sale Price / set
25% Off
Porky Hefer, Kooboo Cane "Spun" Chair with Leather Seat
By Porky Hefer 1
Located in Capetown, ZA
The "Spun" chair is an evolution of Porky Hefer’s iconic human-sized nests woven from Kooboo cane and inspired by his fascination with the weaver bird. These are the result of his in...
Category