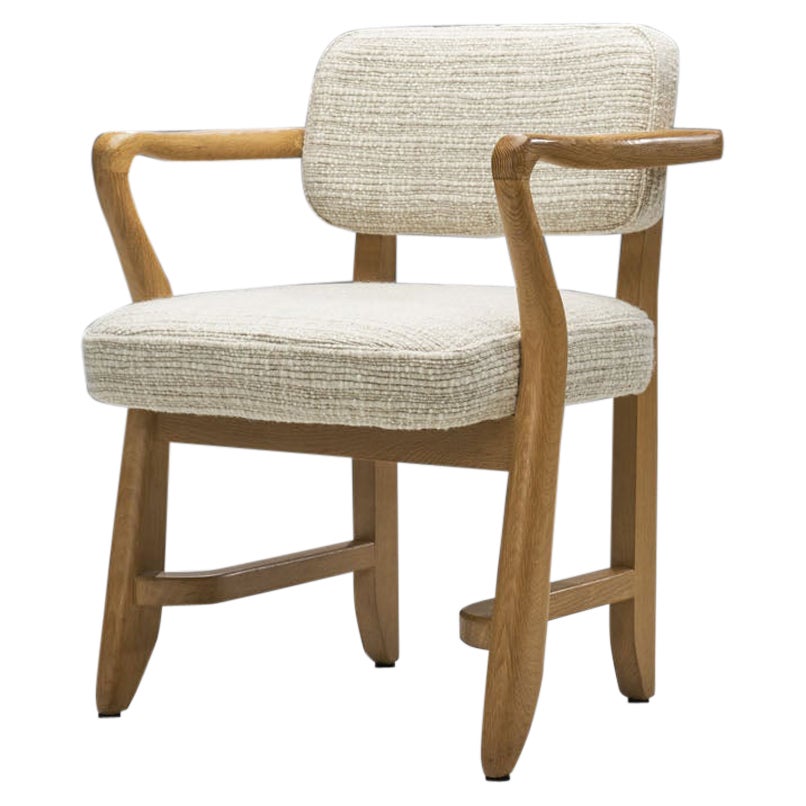 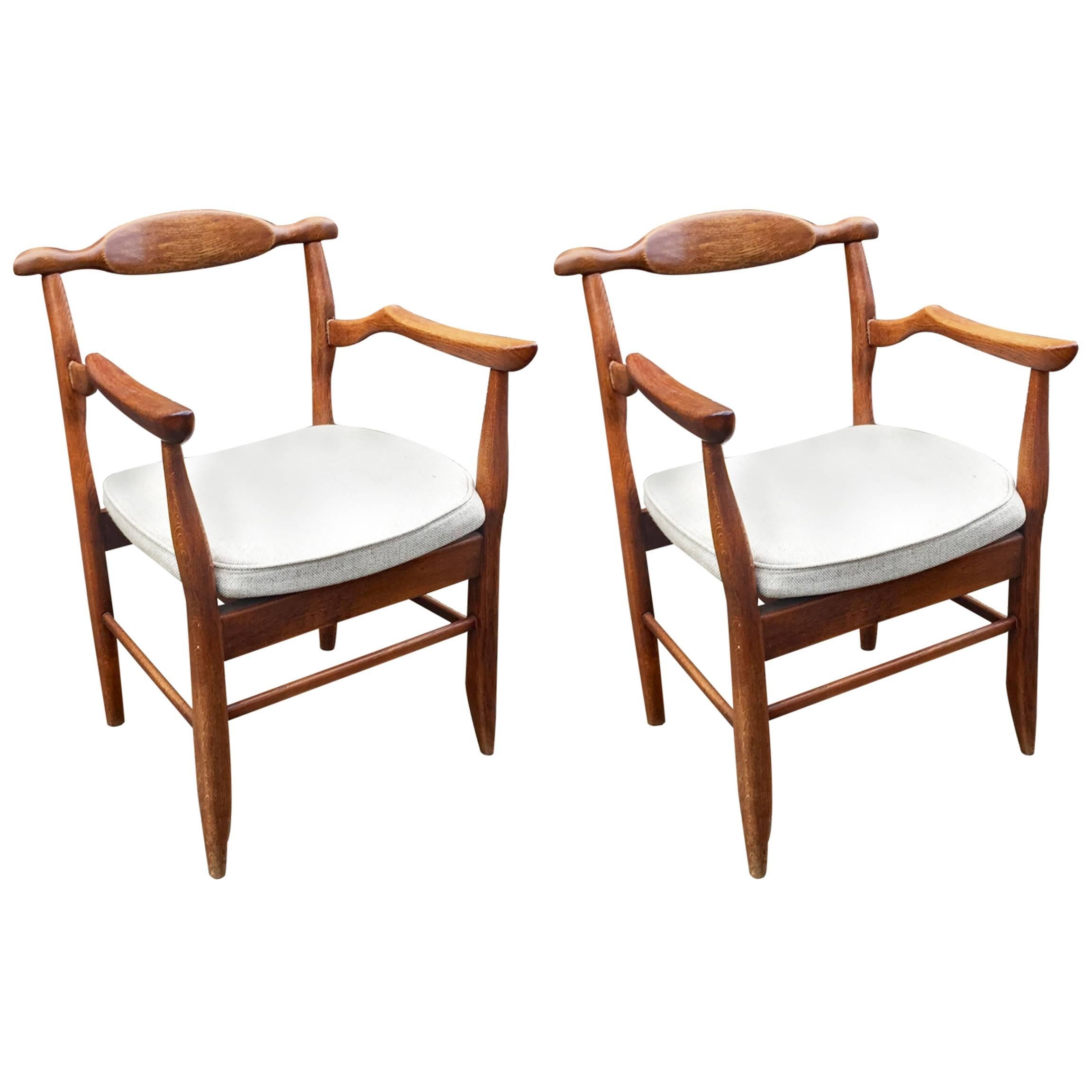 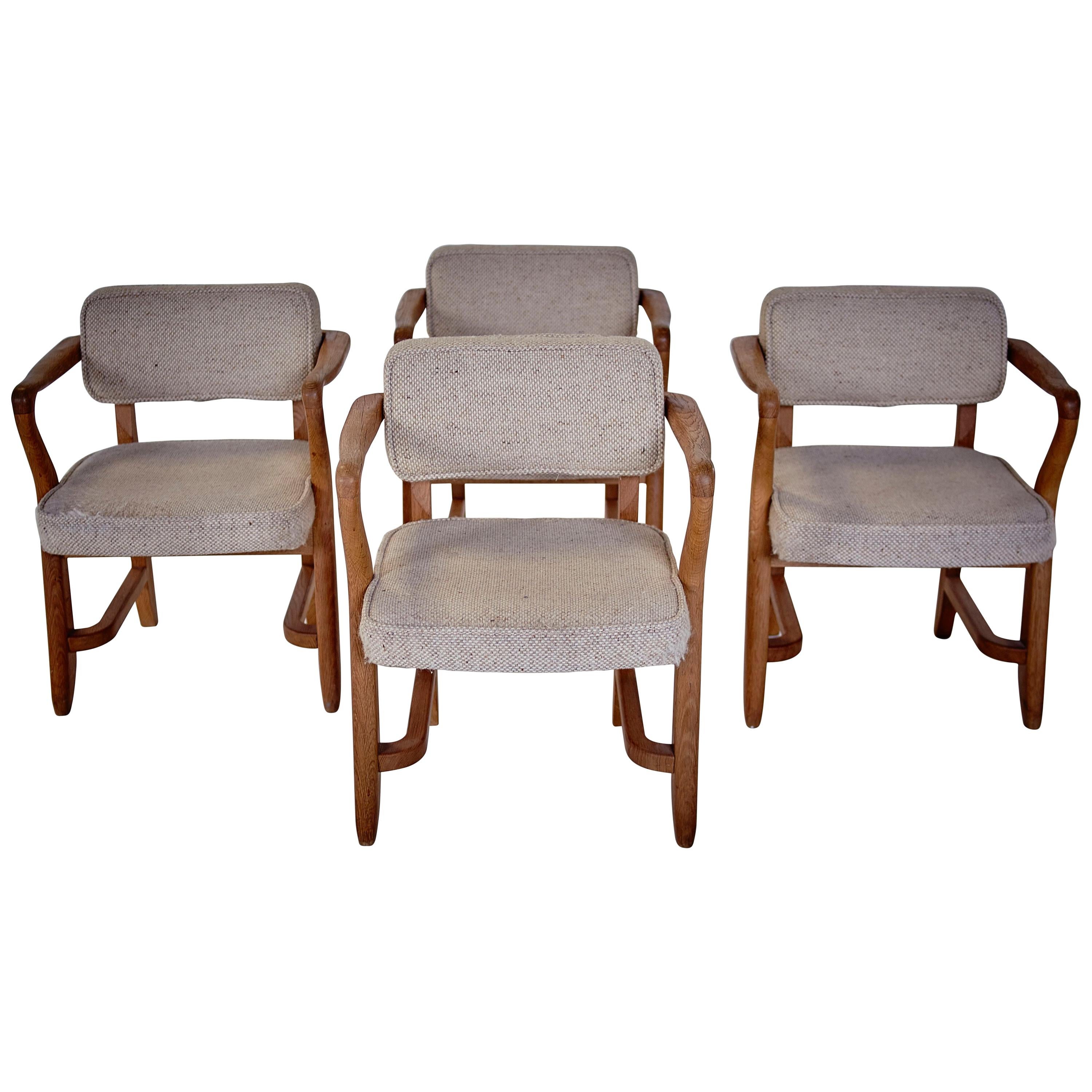 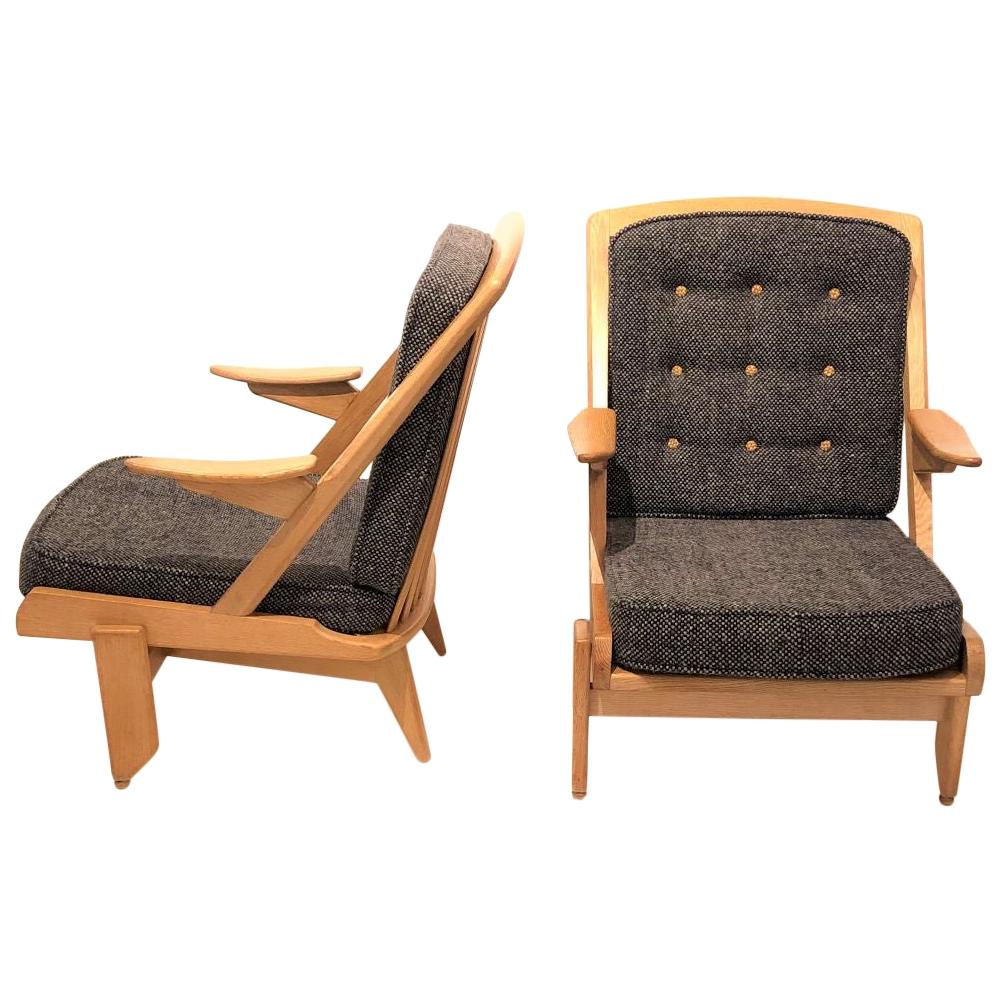 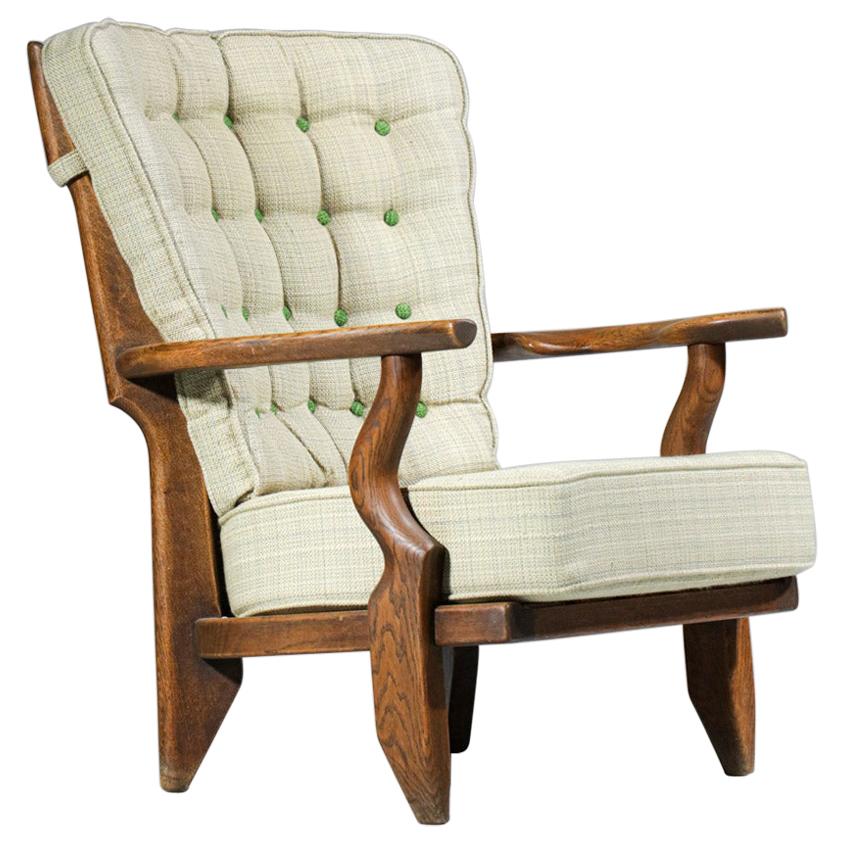 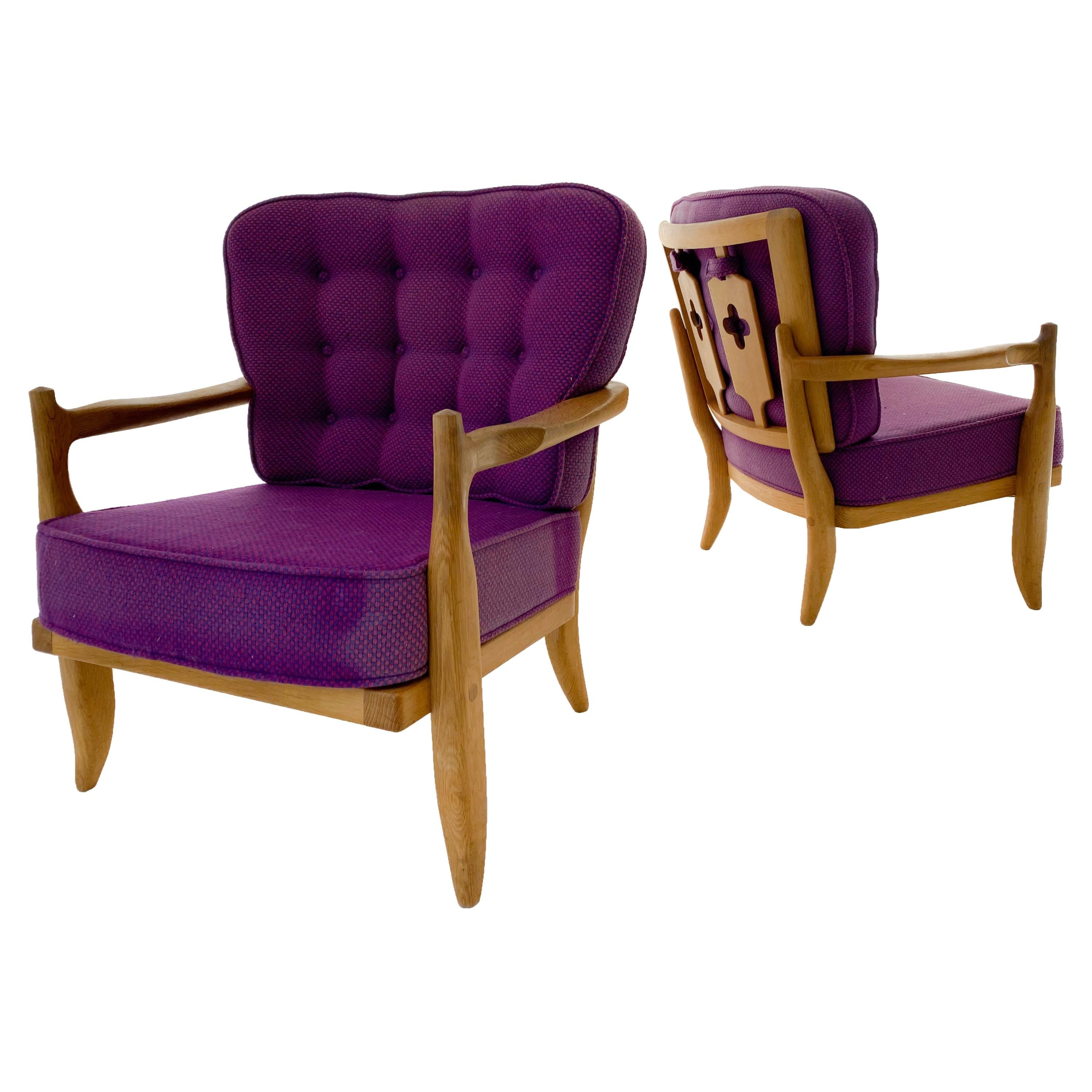 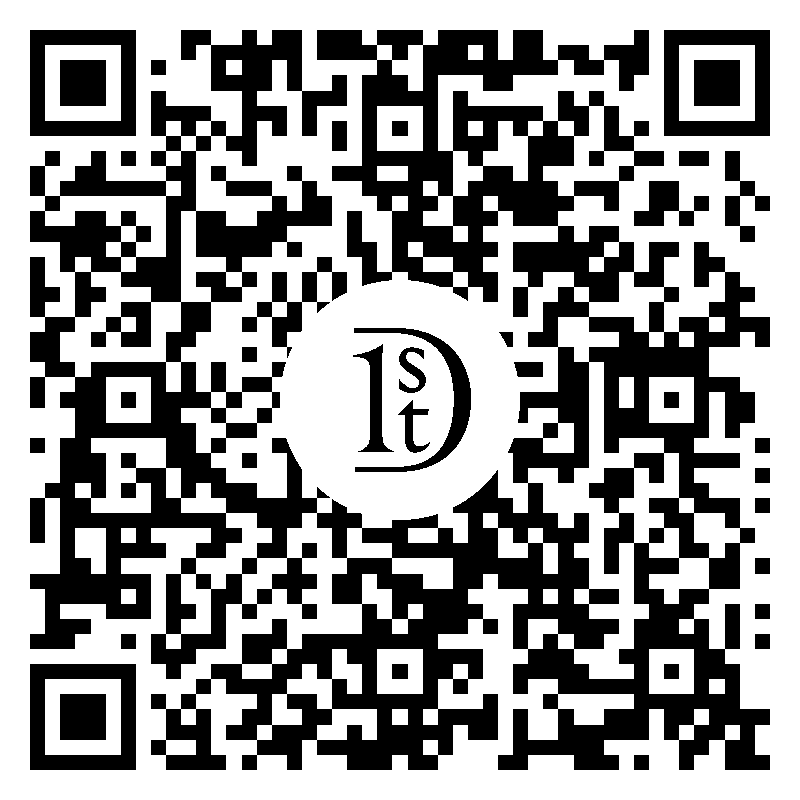 Guillerme & Chambron for Votre Maison, 'Bridge' armchairs, multicolored fabric, oak, France, 1950s These sculptural easy chairs are designed by Guillerme and Chambron. The duo is known for their high quality solid oak furniture. These chairs are called Bridge chairs due to the horizontal line that forms the armrests. These sculptural armchairs have an interesting open construction. The seating and back are made of cushions, upholstered in a cream colored fabric. The French designer duo Jacques Chambron (1914-2001) and Robert Guillerme (1913-1990) started their production postwar. Robert Guillerme studied design and architecture at the École Boule and graduated first in his class in 1934. Meanwhile, Jacques Chambron graduated from the School of Applied Arts in Reims. During the Second World War, the two met in a stalag, a Prussian prisoner camp, while being imprisoned by the Germans in East Prussia and started a great friendship based on their intense and deep passion for interior design. In 1948, Chambron resigned from his job as a painter and decorator on the Rue Nollet in Paris to move to Lille, in the North of France and join Guillerme. A year later, the two met cabinetmaker Émile Dariosecq, who was the owner of a workshop close by. It was during this meeting, that they decided to create their own company. They named it “Votre Maison”, meaning “Your Home”, which became the soul of the company. With this, they wanted to create pieces that focused on functionality combined with a beautiful design useful for daily life, by which they created a worldwide reputation. Most of the furniture designed by this duo shows a strong character and has a great expressive woodwork. The three of them divided their work equally. Overall, Guillerme worked as a designer, Chambron as a commercial, and Dariosecq’s workshop manufactured the pieces. Throughout their career, ‘Votre Maison’ produced over two thousand models, leaving a lasting mark in the world of design. 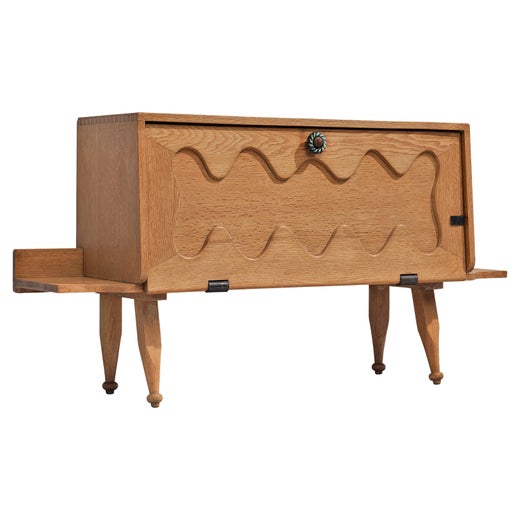 Robert Guillerme and Jacques Chambron, the French creative duo behind Votre Maison, met under unusual circumstances: They discussed design while imprisoned in a forced labor camp. The pair’s combined talents later resulted in modern, sculptural furniture — today, vintage Guillerme et Chambron desks, dining tables, chairs and other pieces still look conceptually playful and vibrant but could fit harmoniously into any home.Guillerme had graduated from the École Boulle in 1934 with a degree in design and architecture, and Chambron had studied at the School of Applied Arts in Reims. They were captured by the Germans in East Prussia during the Second World War and struck up a friendship over their mutual love for all things design. After the war ended, Guillerme moved to Lille in northern France; Chambron left his job as a painter and decorator in Paris and joined him in 1948. In 1949, the pair met Émile Dariosecq, a skilled cabinetmaker who enthusiastically agreed to manufacture the duo’s designs, leading to the start of Votre Maison.Guillerme and Chambron were as prolific as they were detailed, producing more than 2,000 pieces in the second half of the 20th century out of a former gun factory. Their furniture, which was mostly made with different tones of waxed oak, adhered to the trends of design that emerged after the war: mid-century modernism.European furniture in the postwar period largely prioritized function as much as it did form and lacked any unnecessary ornamentation. Guillerme and Chambron wanted people to actually use their furniture, not just look at it. That design philosophy was a pillar of their company, its name translating to “your house” in French. Their signature touches included ornate tiles, hidden drawers and vibrant textiles on pieces such as desks, tables, shelving, lighting, benches and other seating. One of Votre Maison’s most famous and popular pieces was the Grand Repos armchair, a stately, high-backed wide piece with a skeletal oak frame, six spindles and plush cushions.While Guillerme and Chambron were a team, they handled different aspects of the business: Guillerme designed much of the furniture and Chambron concentrated on decor. Votre Maison was a full-service design business. In 1983, the dynamic duo passed on their company to Chambron’s son, Hervé, a designer and graduate of École Boulle.Find a collection of vintage Guillerme et Chambron furniture on 1stDibs.

Recognized Seller
These prestigious sellers are industry leaders and represent the highest echelon for item quality and design.
Diamond Seller
These expertly vetted sellers are 1stDibs' most experienced sellers and are rated highest by our customers.
Established in 2006
1stDibs seller since 2012
3,764 sales on 1stDibs
Typical response time: 1 hour
Associations
20th Century Specialists
More From This Seller

$2,080 / item
Guillerme & Chambron, Midcentury Solid Oak and Fabric French Chairs, 1959
By Votre Maison, Guillerme et Chambron
Located in Milan, IT
Two pairs of bridges armchairs, model "Denis", by Guillerme and Chambron dating from 1959. Structure in light oak and seat in fabric of origin. The duo is known for their high-q...
Category