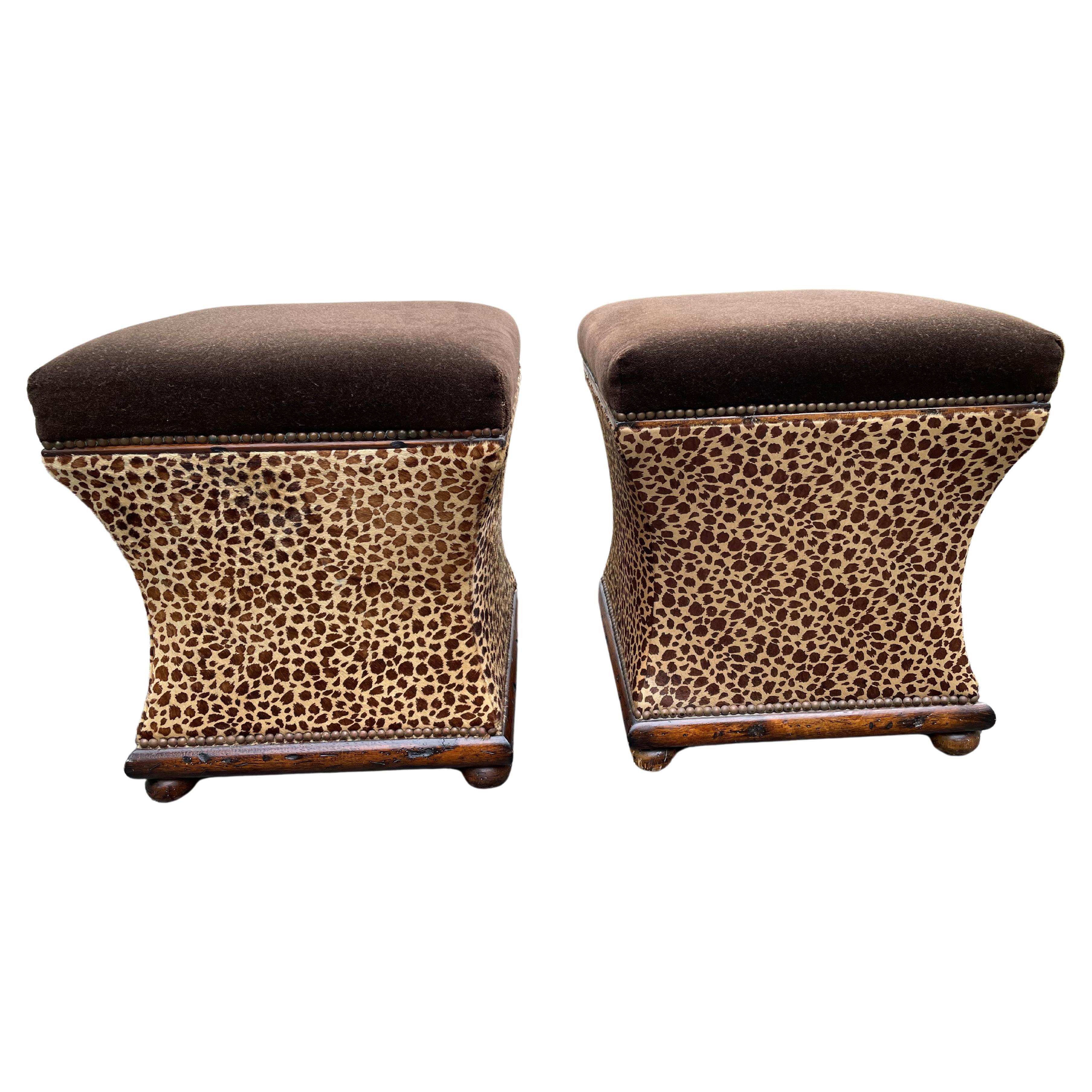 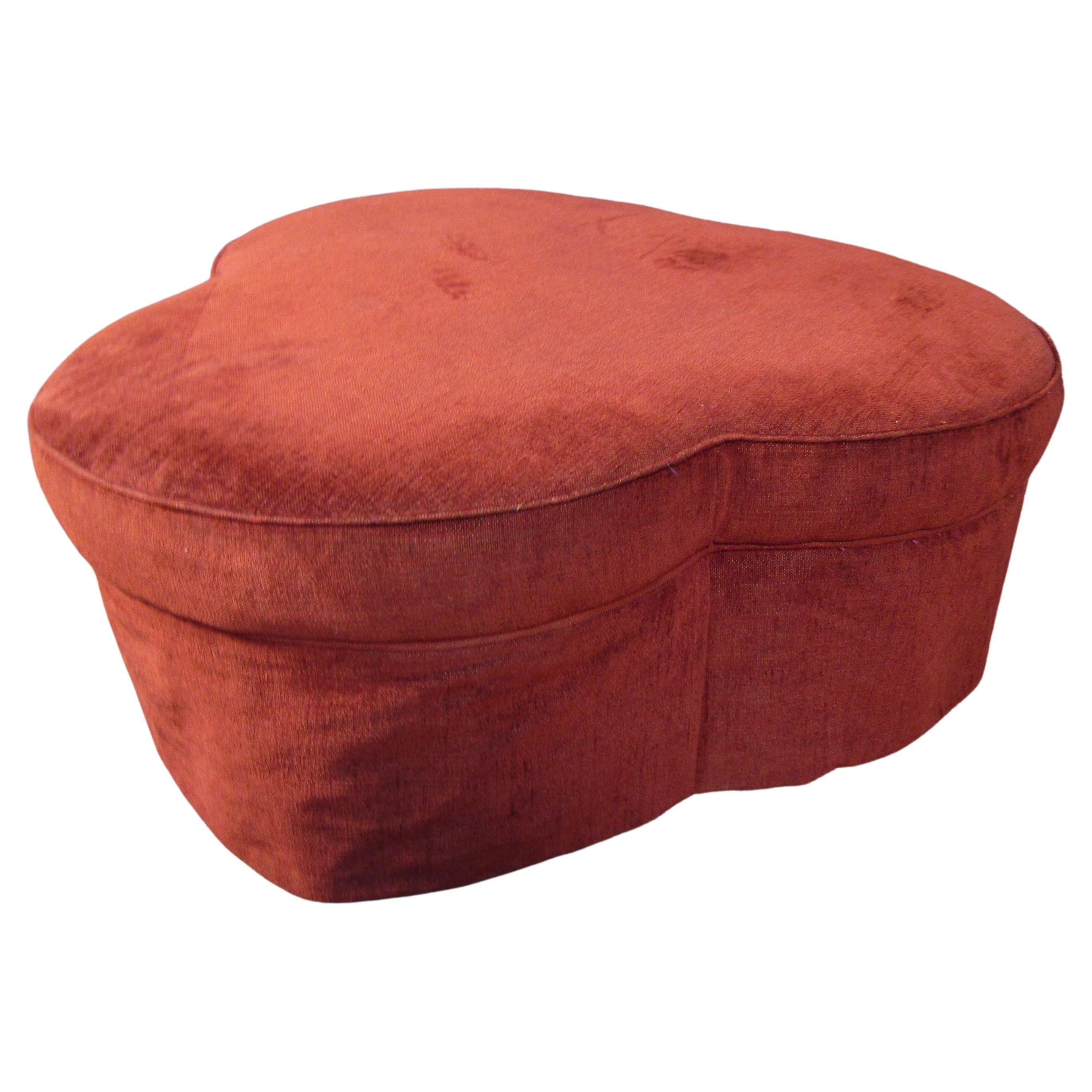 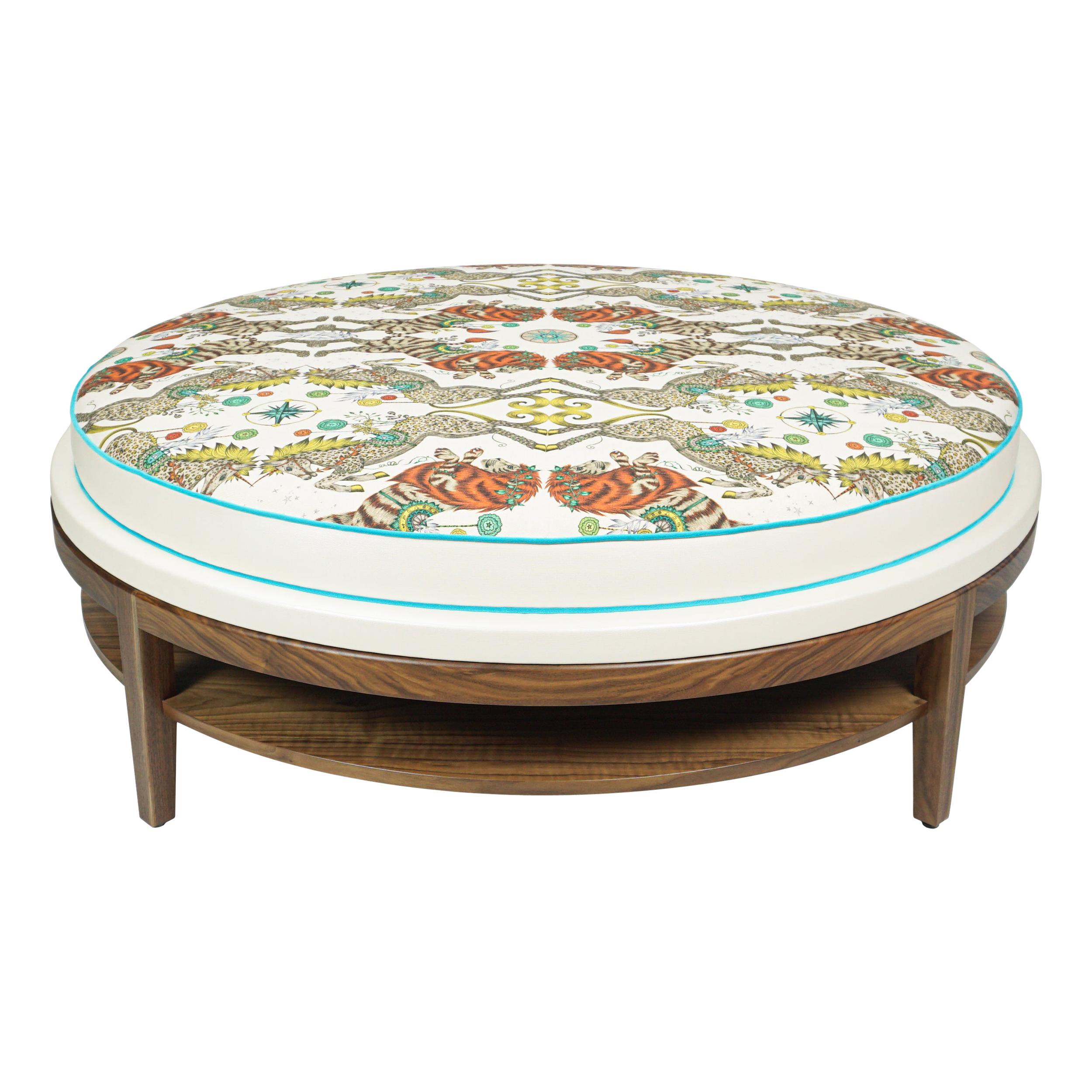 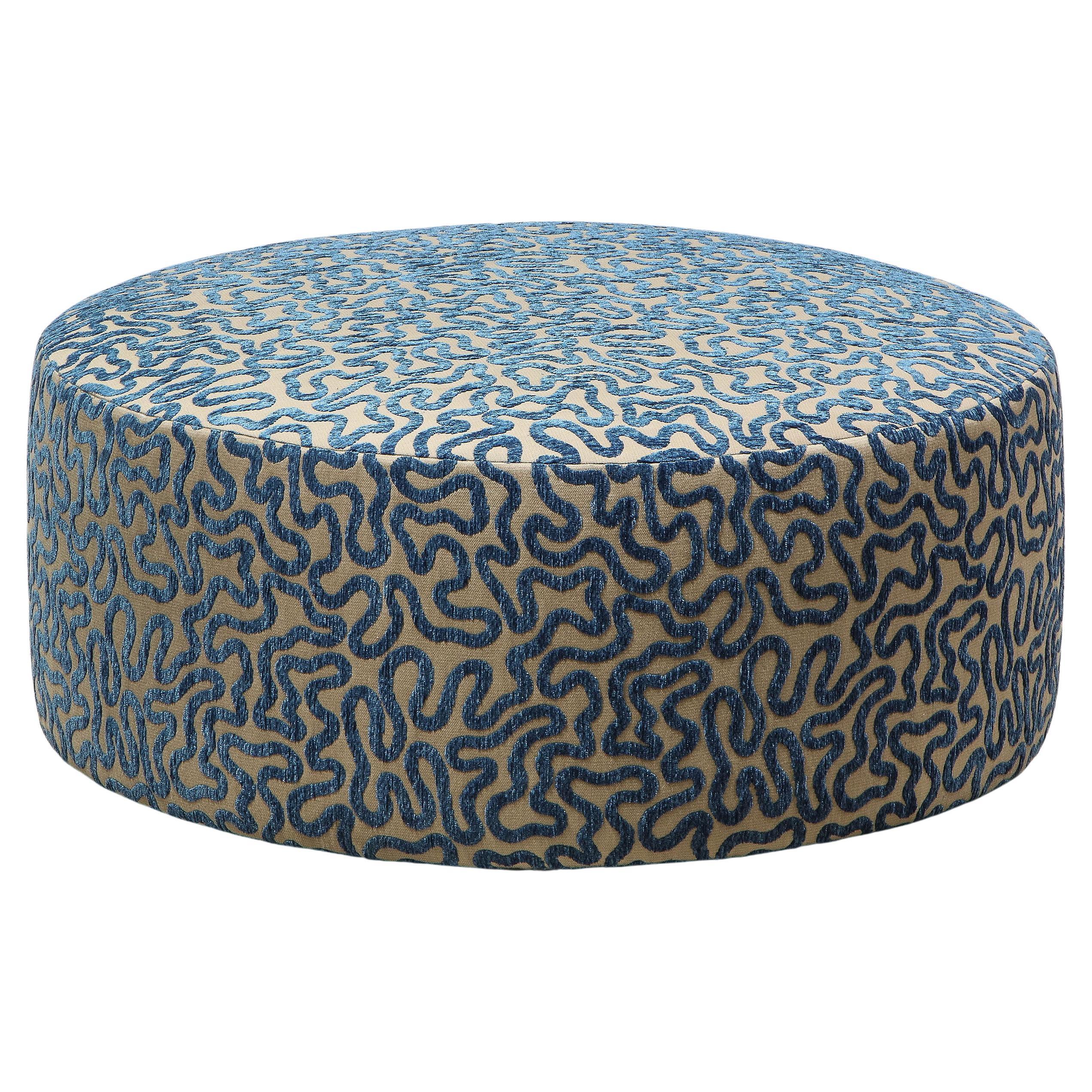 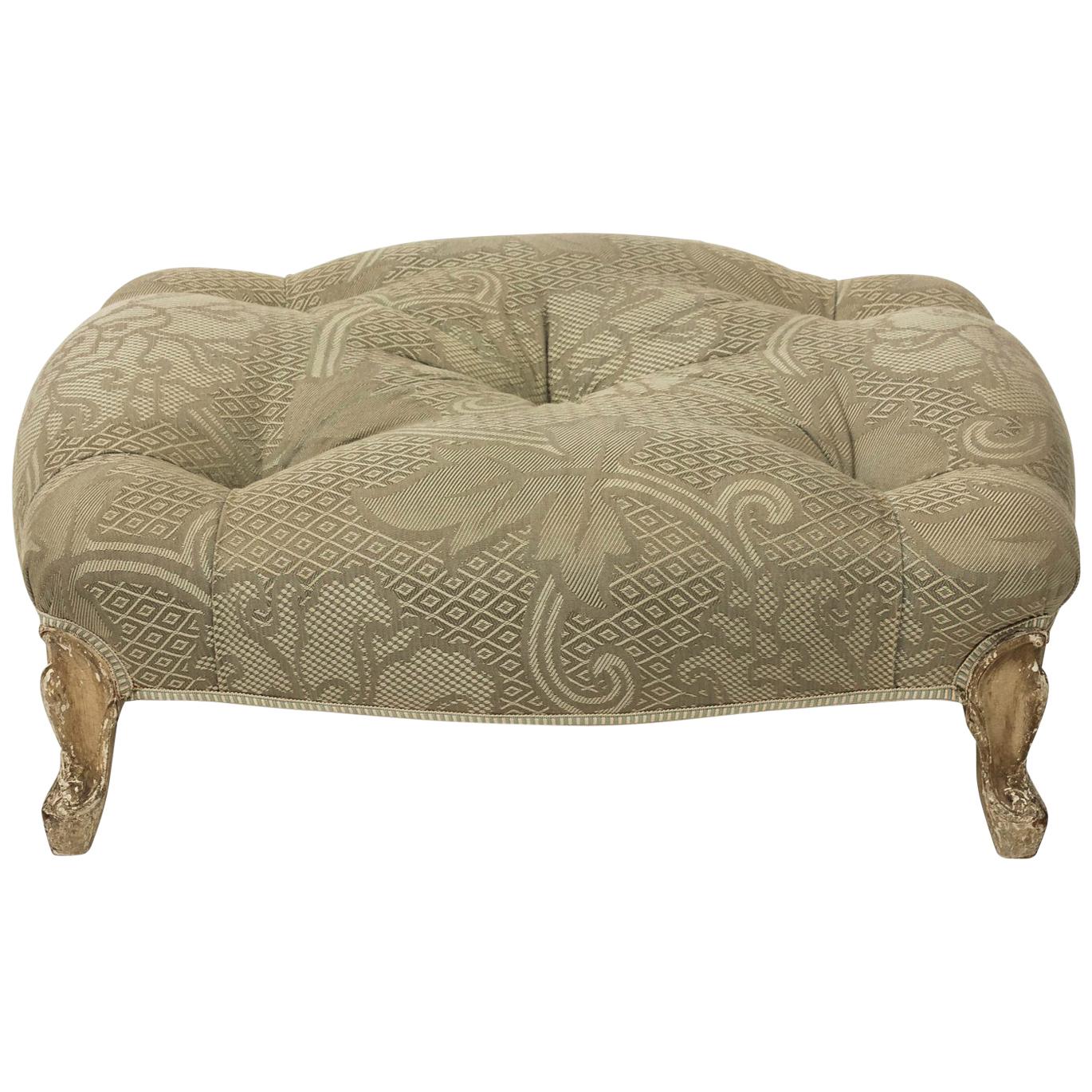 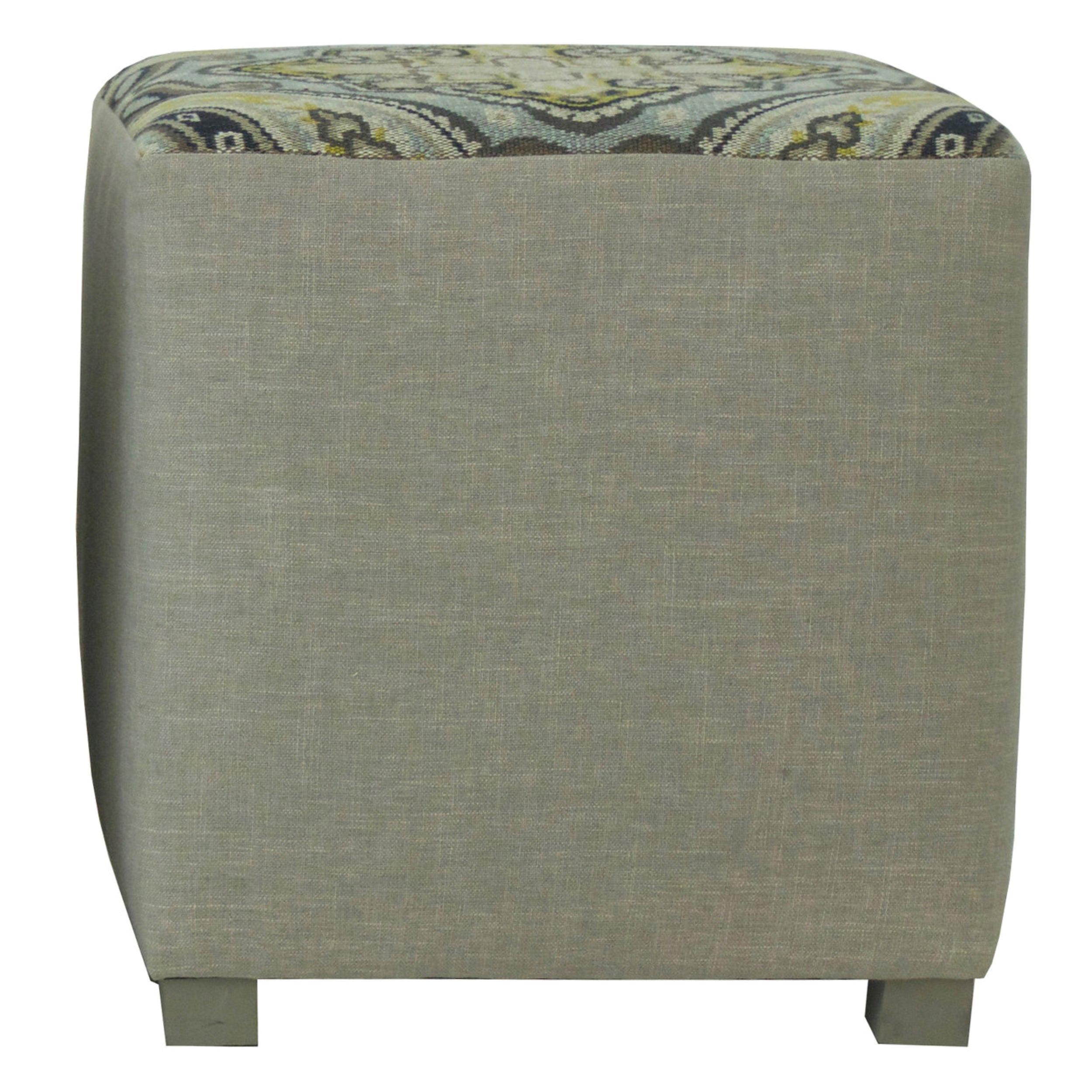 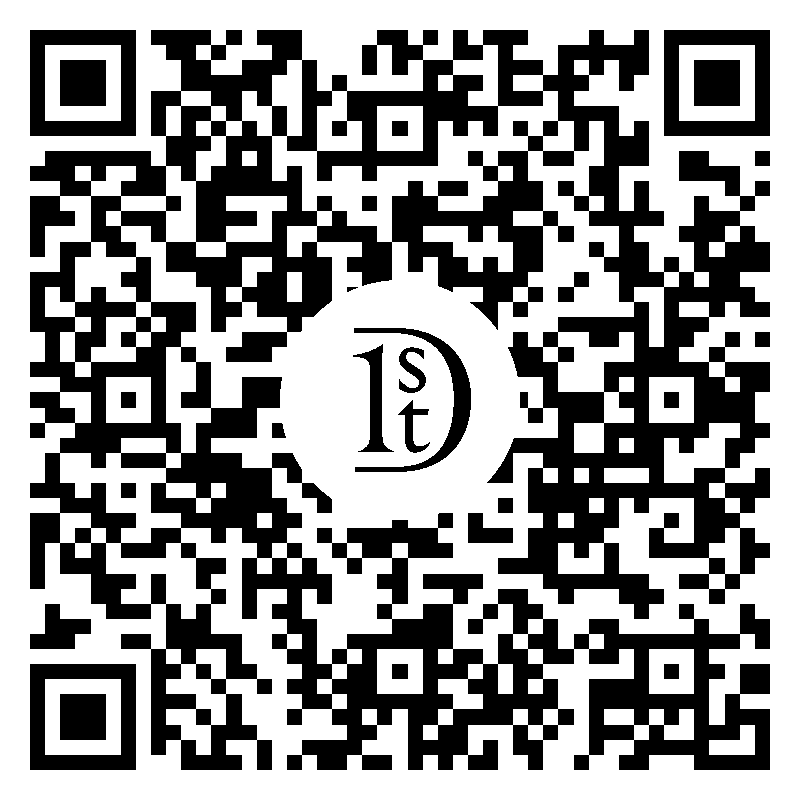 Handsome pair of ottomans by Baker upholstered in a brown and camel animal print. The ottomans have cinched waists and are decorated throughout in antiqued brass nail head trim. Each ottoman rests upon mahogany frames that sit on bun feet. These are wonderful tucked under a console for extra seating. 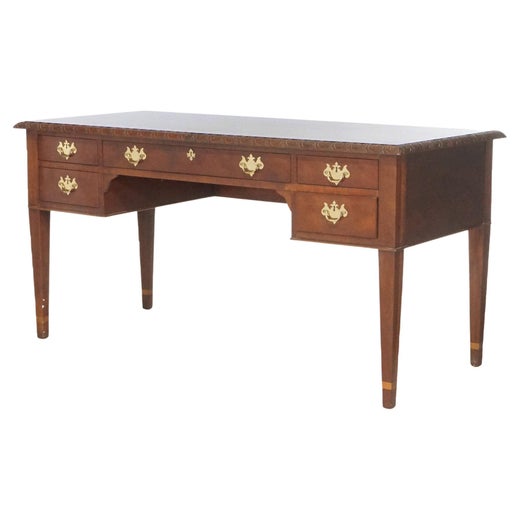 Owing to the company’s collaborations with many leading designers and artists over time, vintage Baker furniture is consistently sought after today. The heritage brand’s chairs, dining tables, desks and other pieces are widely known to collectors and design enthusiasts for their fine craftsmanship and durability.

Within a few decades of its launch, Baker Furniture Company evolved into one of the largest and most important furniture manufacturers in the United States, and became known for its high-quality production standards. Siebe Baker and business partner Henry Cook founded the original iteration of Baker Furniture Company in 1890 in Allegan, Michigan, after immigrating to the United States from the Netherlands. Allegan is a small town west of Grand Rapids, which, at that time was home to Widdicomb Furniture Co. and more and was known as America’s furniture capital. The company manufactured doors and interior moldings, and introduced a combination desk and bookcase in 1893. In the early 1900s, Siebe became sole owner of the business.

Among others, stage designer Joseph Urban and modernist designer Kem Weber contributed designs to Baker in the 1920s. In 1932, under the leadership of Siebe’s son, Hollis, who started at the company as a salesman but took the reins when his father passed in 1925, Baker Furniture introduced bedroom pieces and debuted its Manor House collection, which made reproductions of European furnishings available to the American market. (Hollis was an avid traveler and procured antiques overseas for the company to reproduce in the United States.) Soon, Baker Furniture Company moved to Holland, Michigan, and eventually opened showrooms in Grand Rapids and elsewhere.

Pioneering Scandinavian designer Finn Juhl created a Danish modern line for Baker in 1951, and the company produced his award-winning Chieftain chair for a short time. In the late 1950s, Baker introduced the Milling Road label to reach a younger audience with stylish but less costly furnishings like console tables, walnut dining chairs and more, and in 1961, British furniture designer T.H. Robsjohn-Gibbings introduced a modern neoclassical line at Baker.

The 1960s and ’70s saw the introduction of historic reproduction furniture lines such as Woburn Abbey and the Historic Charleston collection, which remain very popular to this day. In 1990, Baker was licensed to produce a furniture line from Colonial Williamsburg. That same year, the Smithsonian Museum introduced Baker’s Chippendale chair into its permanent collection and the Grand Rapids Art Museum dedicated an exhibition to Baker’s 100-year anniversary, a showcase that included 150 pieces of furniture Siebe Baker had collected as part of a larger assortment that had served as inspiration for his designs.

Today, vintage Baker furniture, such as its elegant mahogany nightstands and teak credenzas — particularly those crafted by Finn Juhl — sees high demand online and elsewhere. The company continues to produce contemporary collections with well-known designers such as Bill Sofield, Barbara Barry and Kara Mann and remains on par with some of the highest quality furniture in the industry.

1stDibs Buyer Protection Guaranteed
If your item arrives not as described, we’ll work with you and the seller to make it right. Learn More
About the Seller
4.8
Located in Hopewell, NJ
Platinum Seller
These expertly vetted sellers are 1stDibs' most experienced sellers and are rated highest by our customers.
Established in 2008
1stDibs seller since 2011
1,861 sales on 1stDibs
Typical response time: 1 hour
More From This SellerView All
People Also Browsed
You May Also Like
Featured in Design ValuesView All