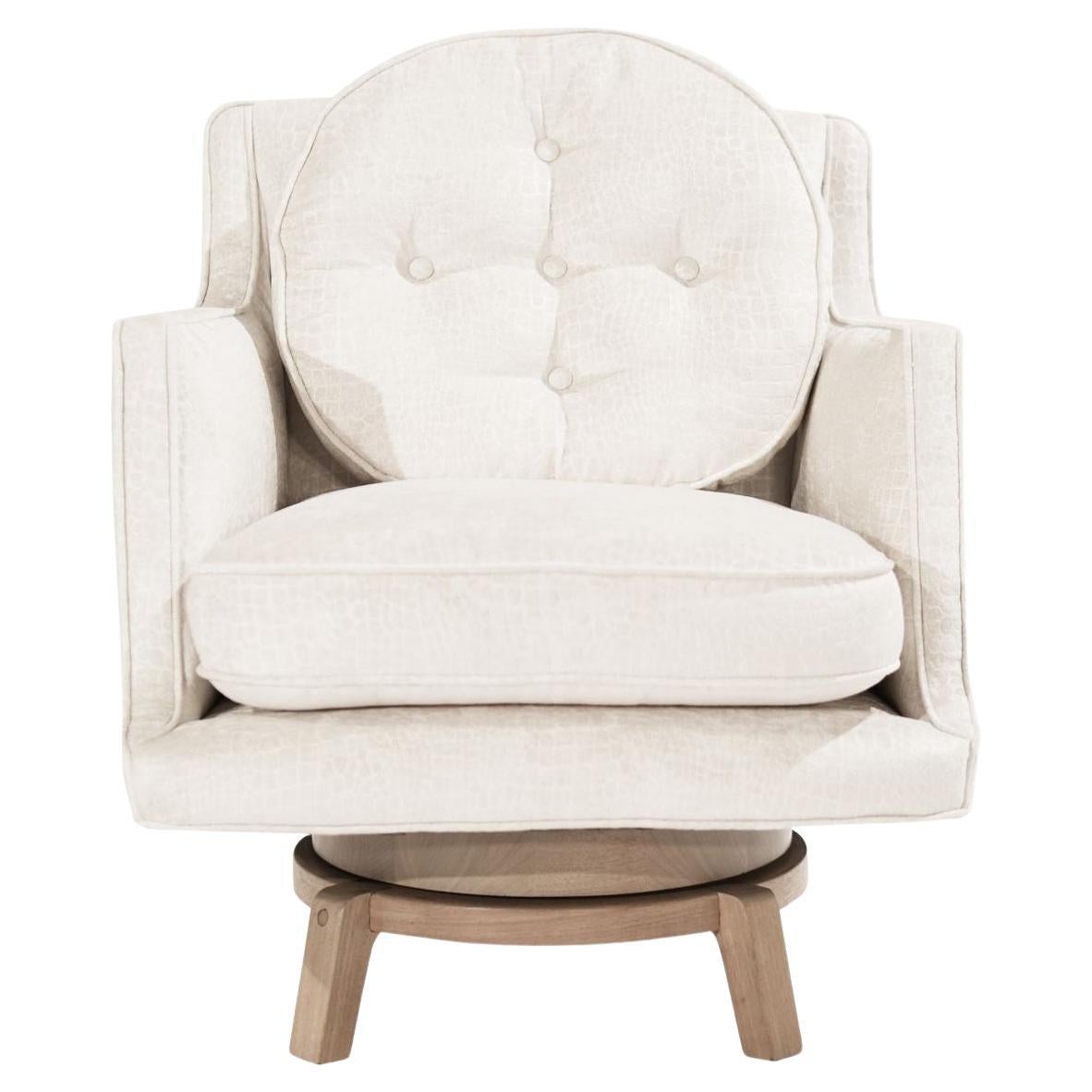 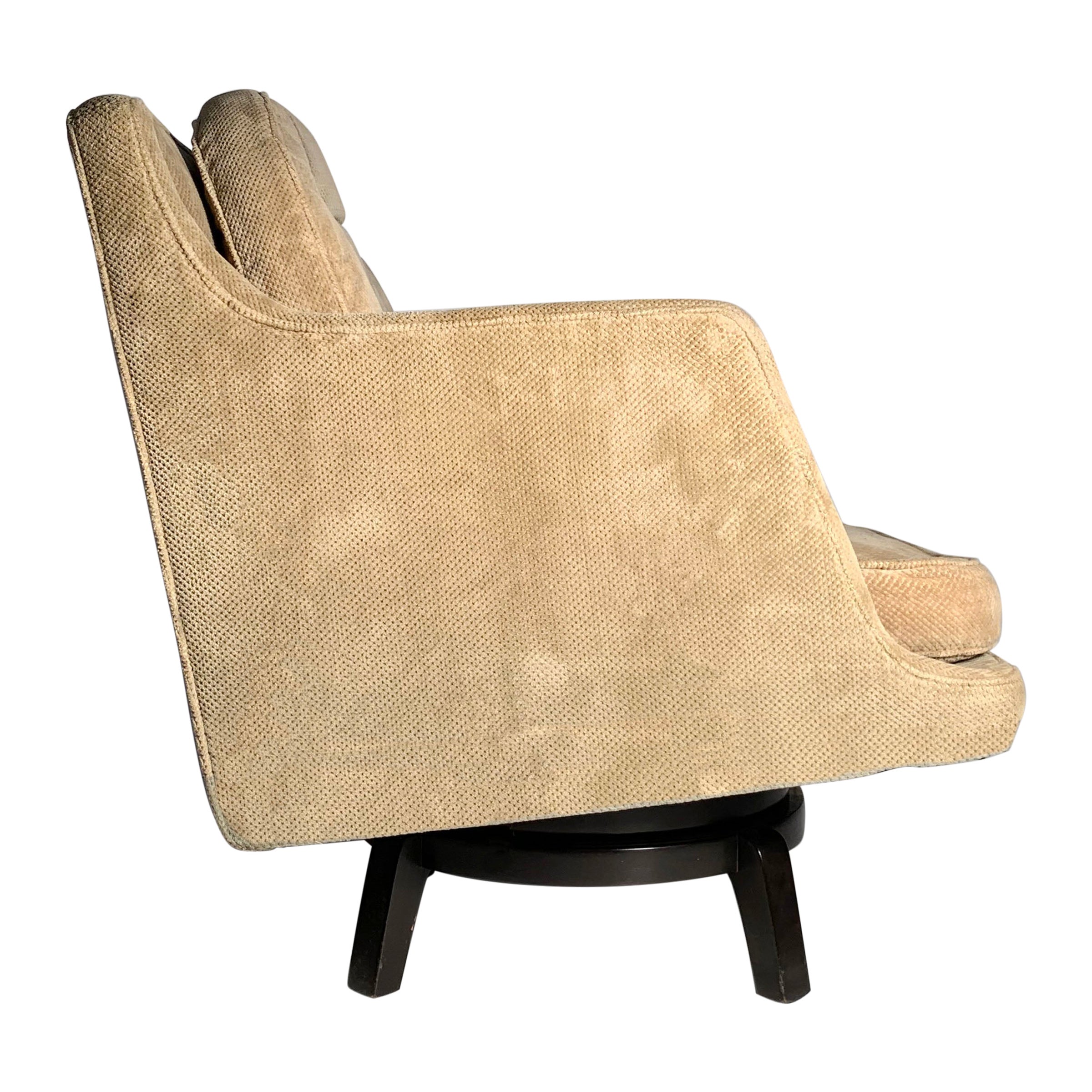 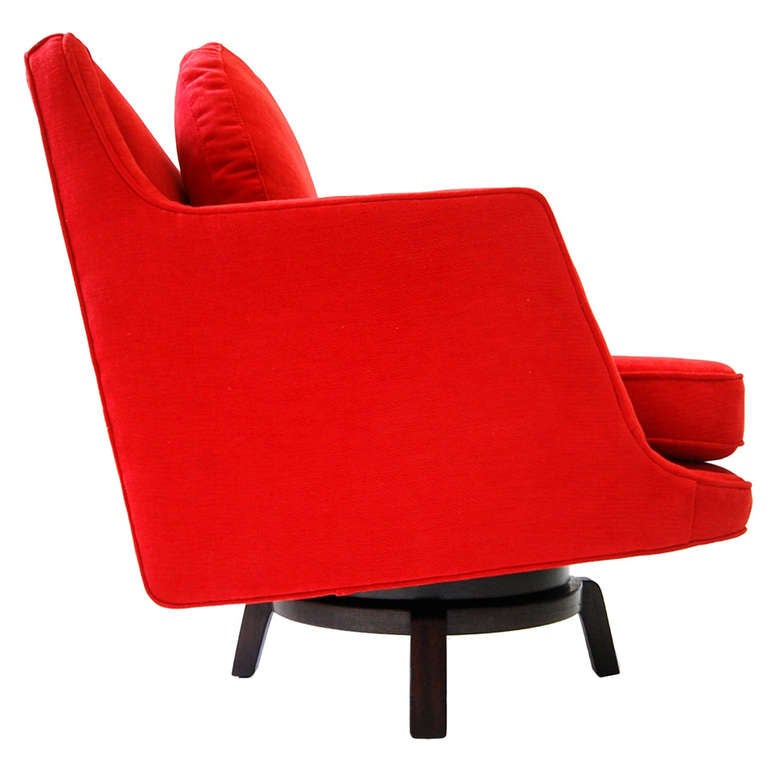 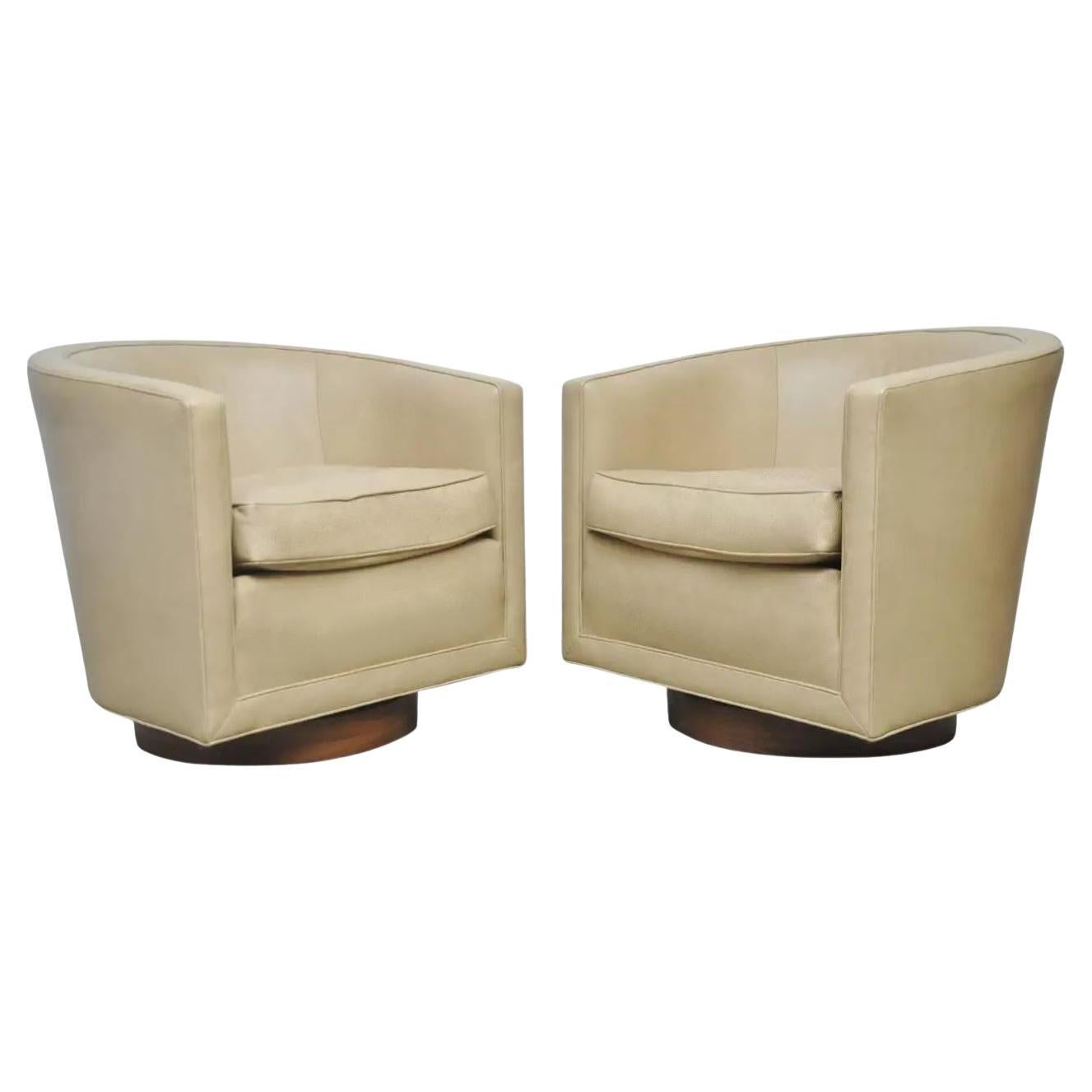 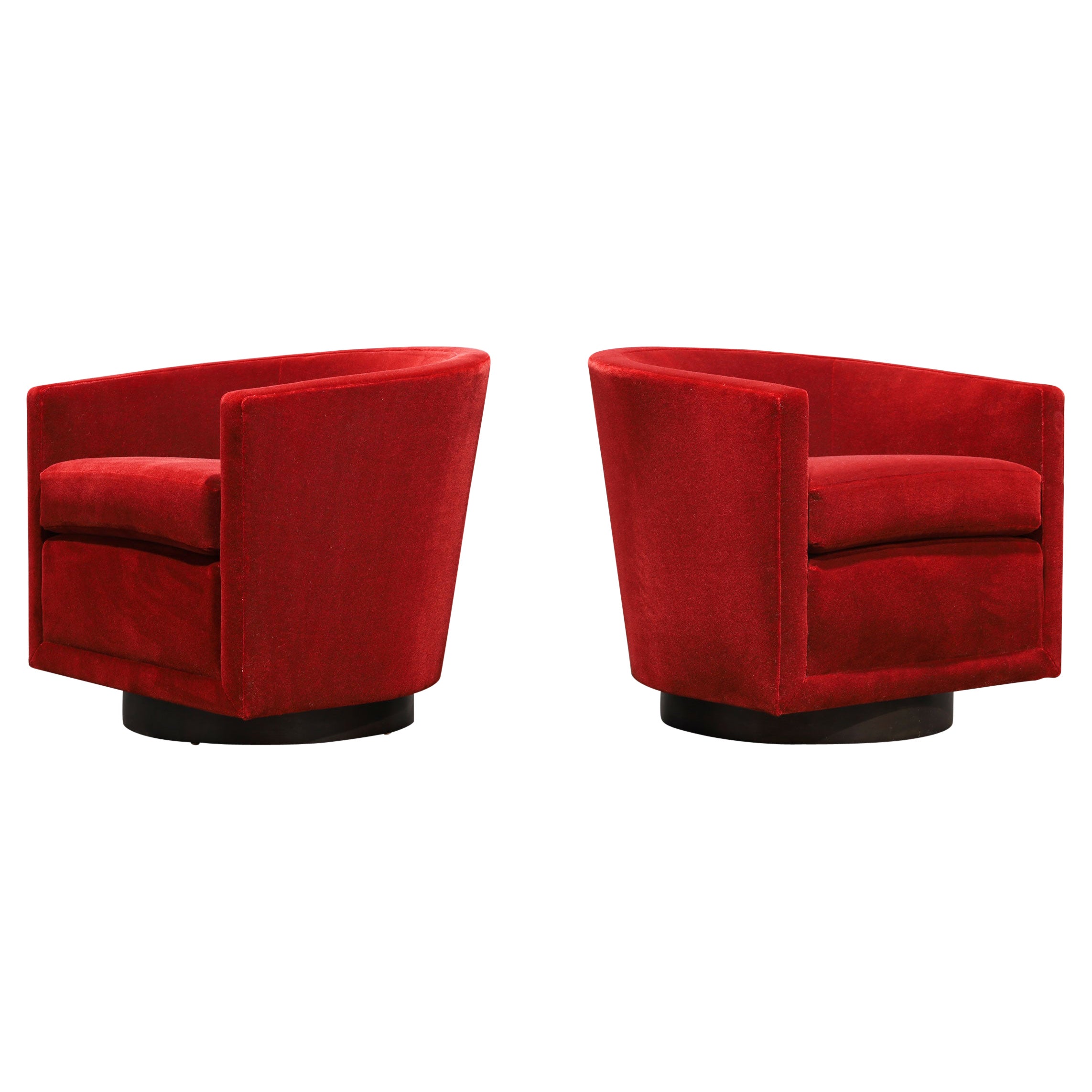 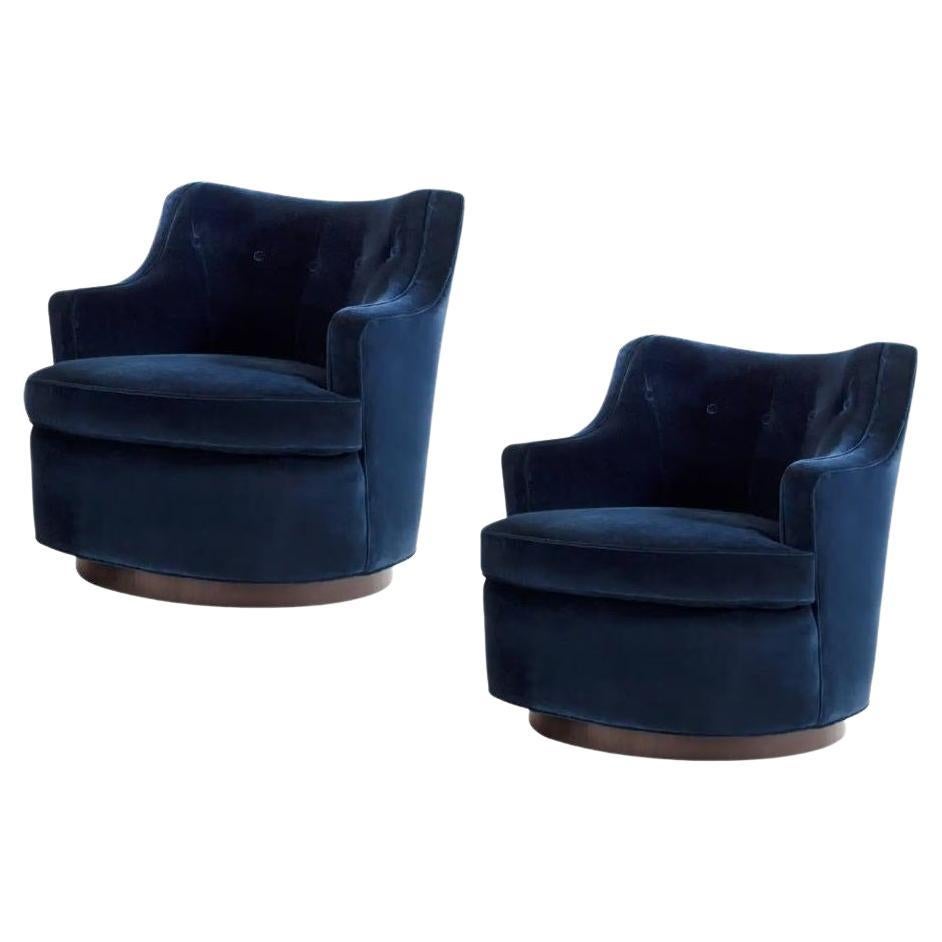 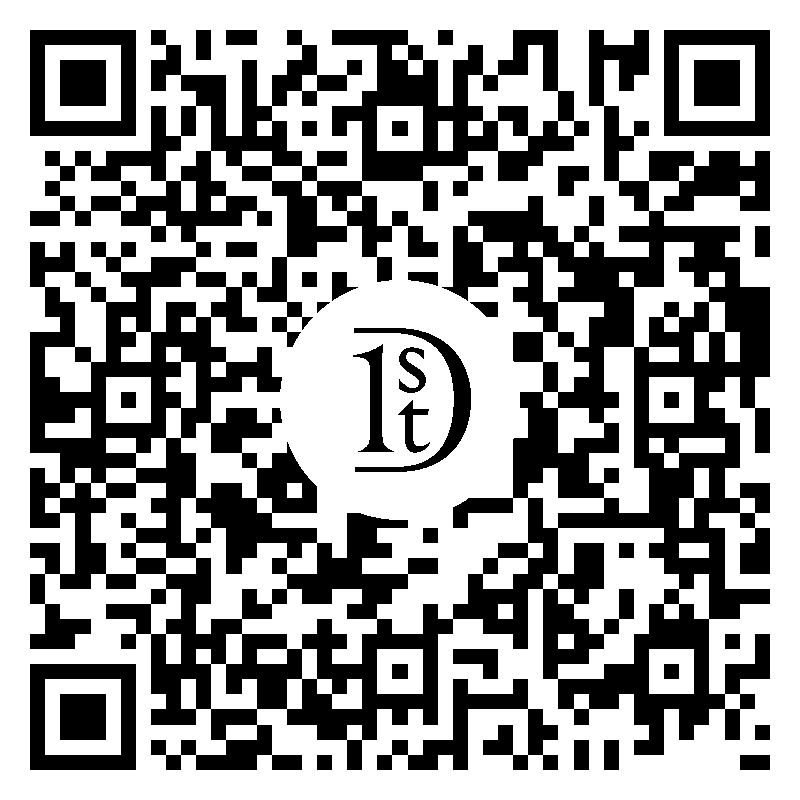 Dunbar barrel swivel lounge chair with a walnut base on brass casters. The casters can easily be removed if so desired. The walnut base has been expertly refinished and the mechanism works perfectly. The original Jack Lenor Larsen Fabric is amazing but in poor condition with multiple tears and worn areas. However, the buyer might want to use a portion of the Larsen fabric for a throw pillow, etc. We have this priced low to allow for the new owner to reupholster it to their liking. Signed "Dunbar" in the decking. 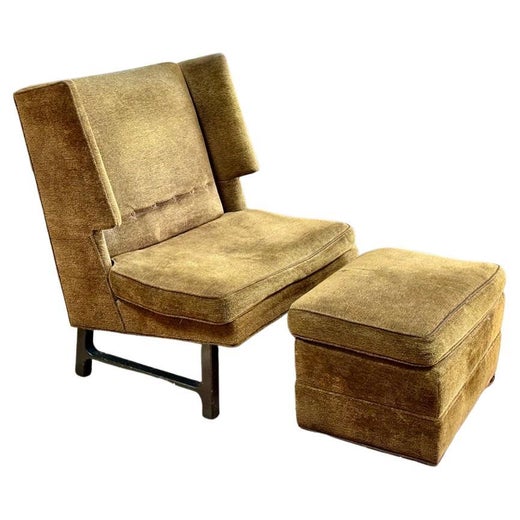 Wormley was born in rural Illinois and as a teenager took correspondence courses from the New York School of Interior Design. He later attended the Art Institute of Chicago but ran out of money for tuition before he could graduate. Marshall Field hired Wormley in 1930 to design a line of reproduction 18th-century English furniture; the following year he was hired by the Indiana-based Dunbar, where he quickly distinguished himself. It was a good match.

Dunbar was an unusual firm: it did not use automated production systems; its pieces were mostly hand-constructed. For his part, Wormley did not use metal as a major component of furniture; he liked craft elements such as caned seatbacks, tambour drawers, or the woven-wood cabinet fronts seen on his Model 5666 sideboard of 1956. He designed two lines for Dunbar each year — one traditional, one modern — until 1944, by which time the contemporary pieces had become the clear best sellers.

Many of Wormley’s signature pieces — chairs, sofas, tables and more — are modern interpretations of traditional forms. His 1946 Riemerschmid Chair — an example is in the collection of the Museum of Modern Art — recapitulates a late 19th-century German design. The long, slender finials of his Model 5580 dining chairs are based on those of Louis XVI chairs; his Listen-to-Me Chaise (1948) has a gentle Rococo curve; the “Precedent” line that Wormley designed for Drexel Furniture in 1947 is a simplified, pared-down take on muscular Georgian furniture. But he could invent new forms, as his Magazine table of 1953, with its bent wood pockets, and his tiered Magazine Tree (1947), both show. And Wormley kept his eye on design currents, creating a series of tables with tops that incorporate tiles and roundels by the great modern ceramicists Otto and Gertrud Natzler.

As the vintage items on 1stDibs demonstrate, Edward Wormley conceived of a subdued sort of modernism, designing furniture that fits into any decorating scheme and does not shout for attention. 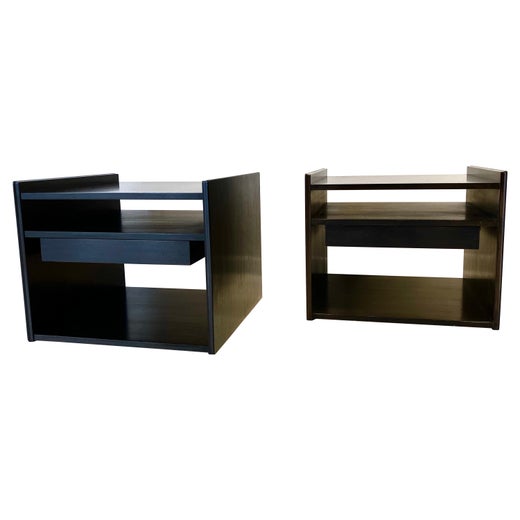 Revered for its handcrafted and highly collectible mid-century modern sofas, coffee tables and other furnishings, Dunbar Furniture was founded in 1910 in Berne, Indiana, but it didn’t gain widespread recognition until the ’30s, following the introduction of its president to a designer who would leave an indelible mark on the company’s legacy: Edward Wormley.

After a stint at the Art Institute of Chicago, the Oswego, Illinois-born Wormley worked as an interior designer for Marshall Field’s before joining Dunbar in 1931. Initially focused on developing the company’s cheapest furniture line, which could be bought with soap coupons, he was soon leading Dunbar Furniture into a new era of residential furniture for modern American homes. He would serve as the company’s design director for over three decades, designing about 150 pieces each year.

During that time, he oversaw the production of designs in a wide range of materials, with influences ranging from Scandinavian modernism to Art Deco. There were modern upholstery pieces, like swiveling lounge chairs and low-slung sofas, and experiments with textural wood on bar carts and cabinets as well as minimal, sculptural tables and functional office furniture. A passionate collector of Tiffany Studios lamps, Wormley used their glass tiles in Dunbar tables in 1956. He also worked on the reproduction of pieces by designers such as Jean-Michel Frank and Richard Riemerschmid.

One standout Dunbar Furniture collection was Janus, introduced in the 1960s, with Austrian-born ceramicists Otto and Gertrud Natzler. These pieces see the Natzlers’ uniquely artful ceramic tiles set into several styles of wooden tables. They remain some of the most sought-after mid-century modern Dunbar pieces on the vintage market today. During the peak of his design career and, indeed, the height of Dunbar Furniture’s history, Wormley amassed a whopping 30 Good Design awards between 1950 and 1955 through the “Good Design” exhibition, hosted by the Chicago Merchandise Mart and the Museum of Modern Art. Dunbar today produces a limited selection of archival Wormley designs, but many sales of original Dunbar pieces are through the resale market.

1stDibs Buyer Protection Guaranteed
If your item arrives not as described, we’ll work with you and the seller to make it right. Learn More
About the Seller
5.0
Located in Kansas City, MO
Platinum Seller
These expertly vetted sellers are 1stDibs' most experienced sellers and are rated highest by our customers.
Established in 1998
1stDibs seller since 2014
509 sales on 1stDibs
Typical response time: <1 hour
More From This SellerView All
People Also Browsed
You May Also Like
Featured in Rare Finds: Shop our best valuesView All