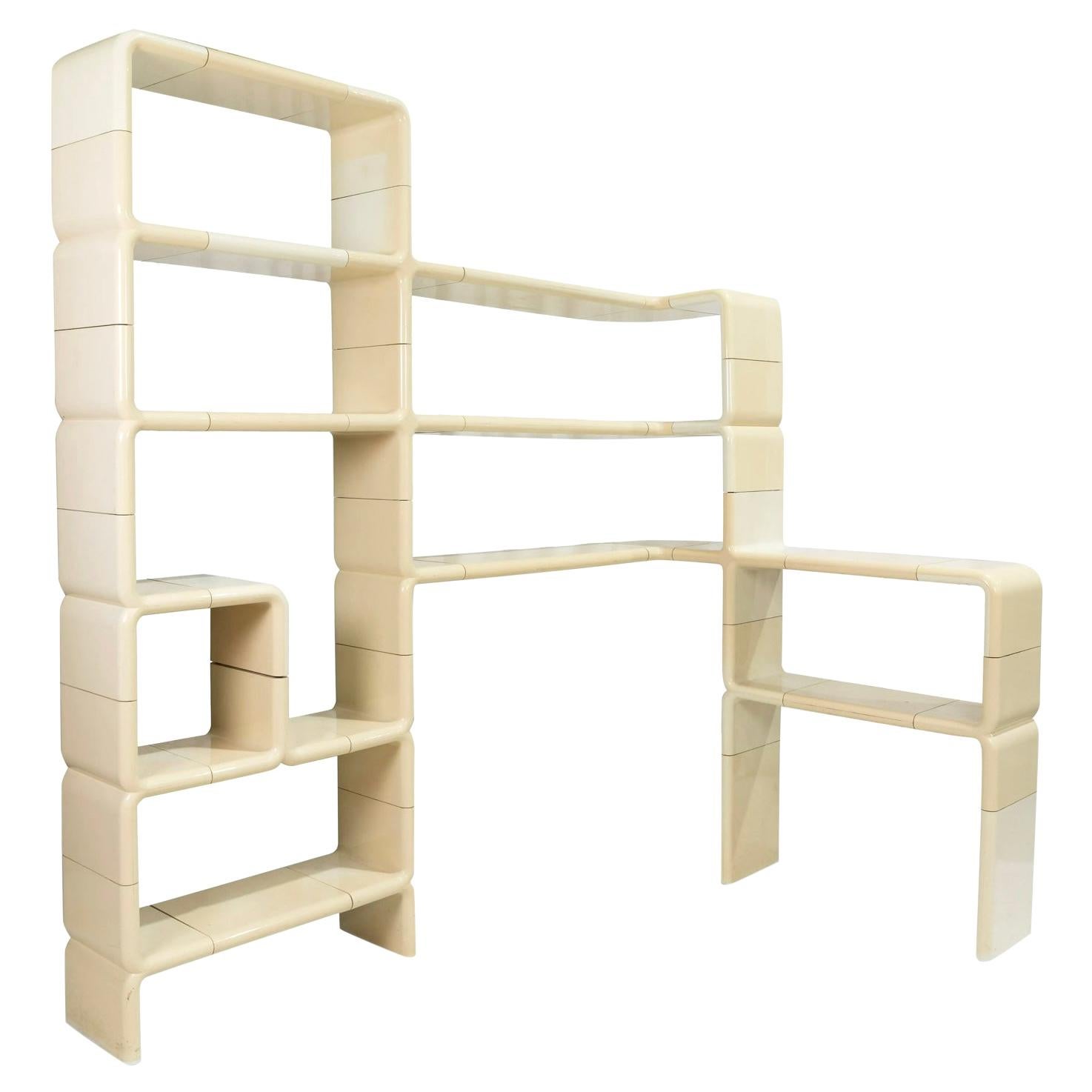 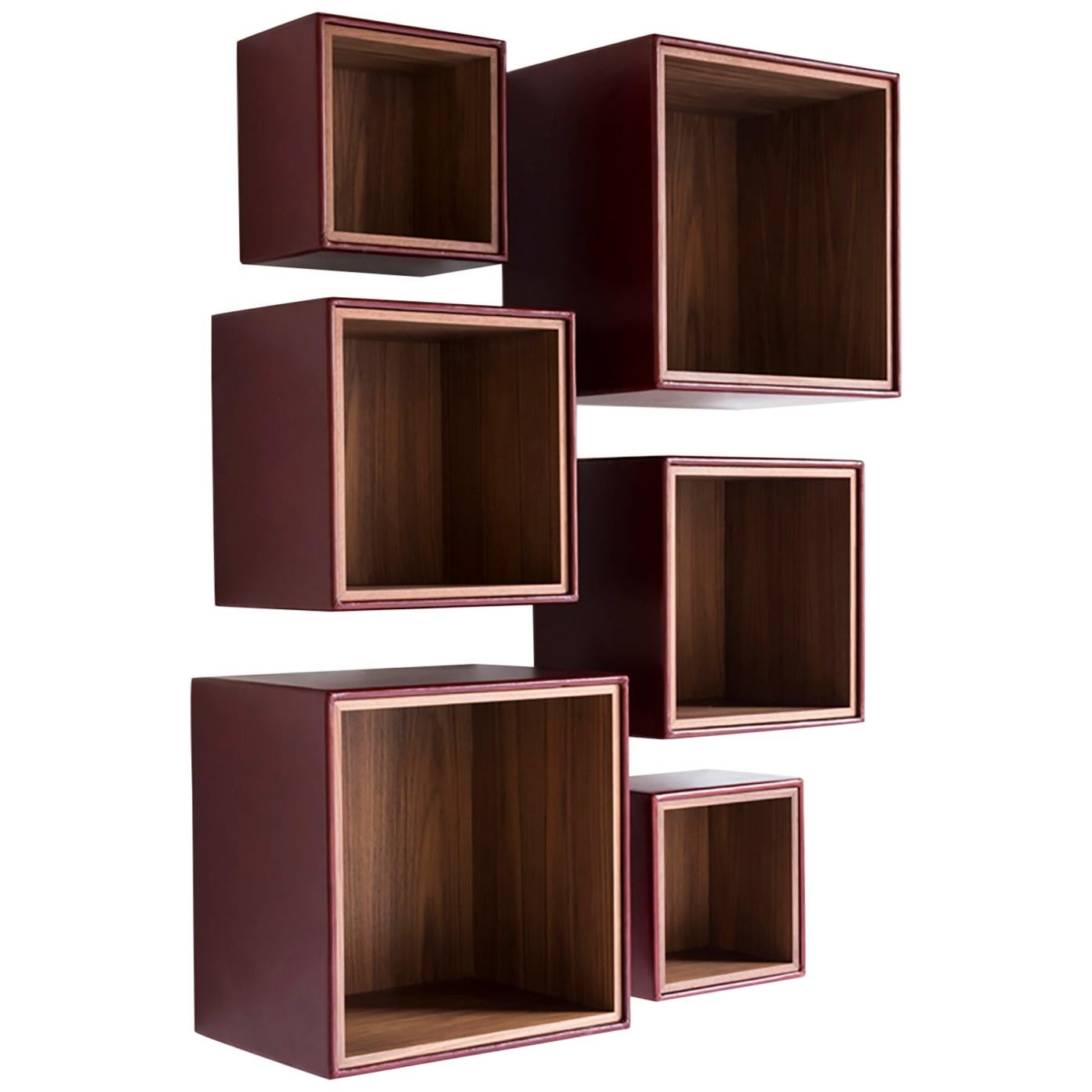 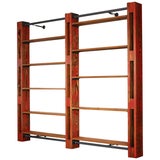 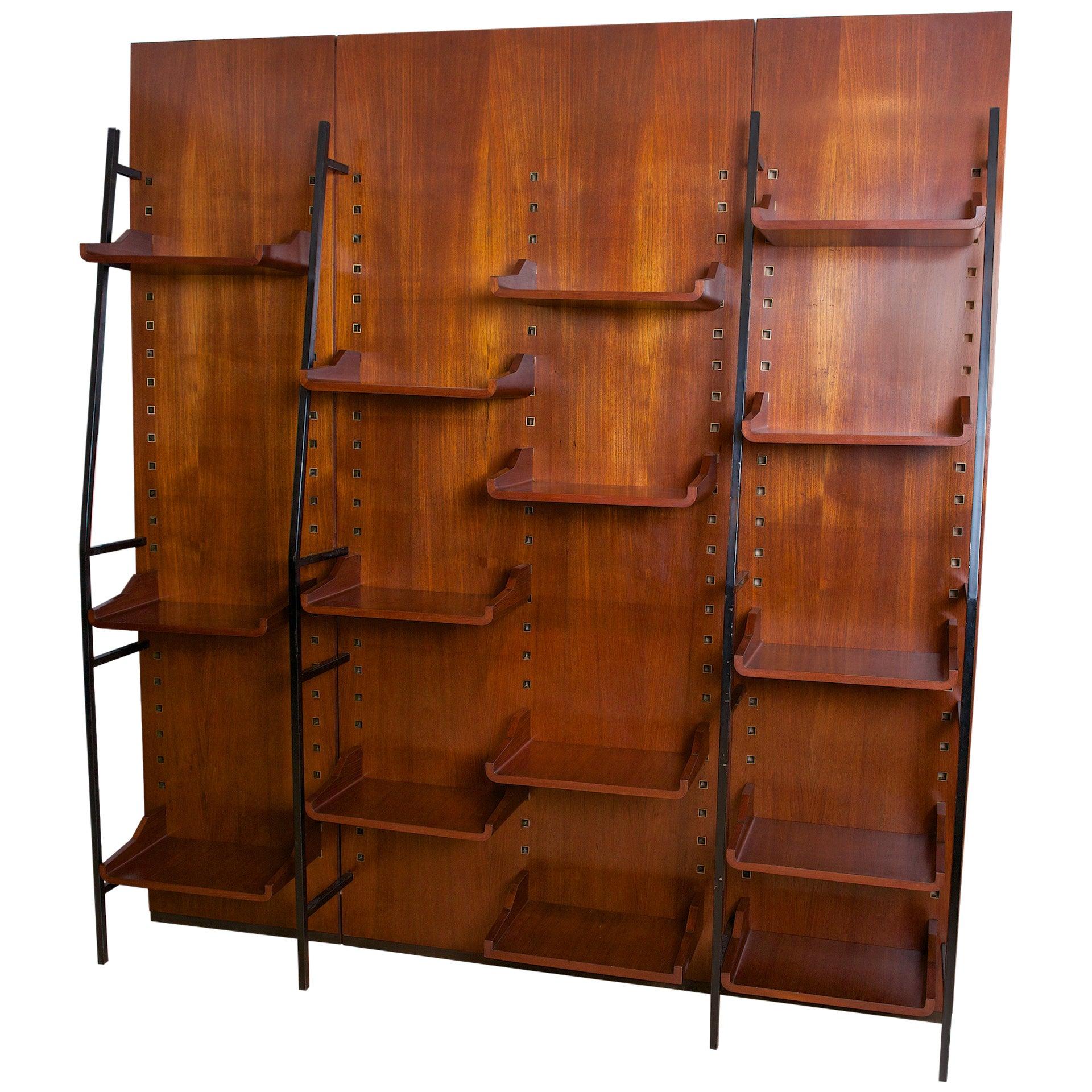 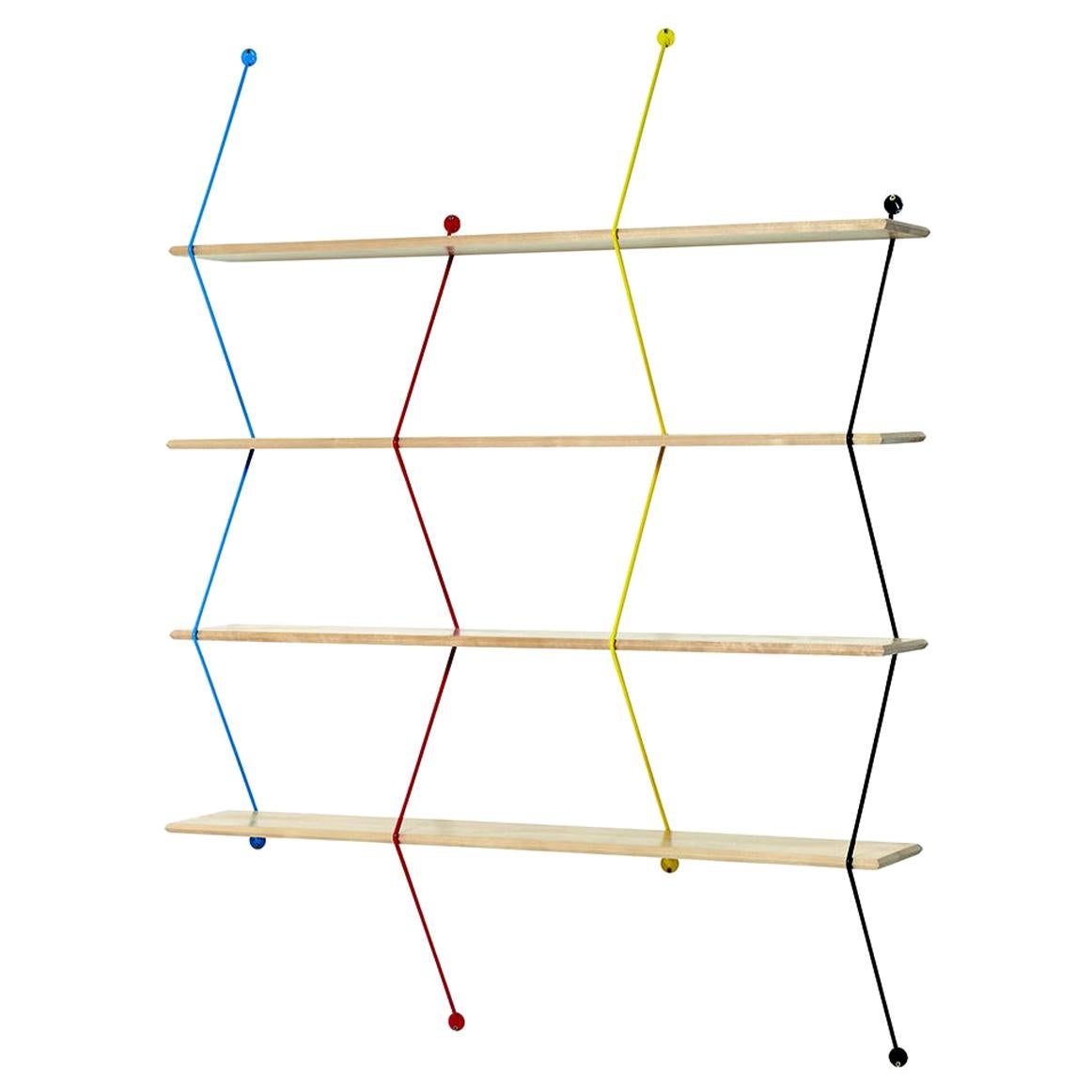 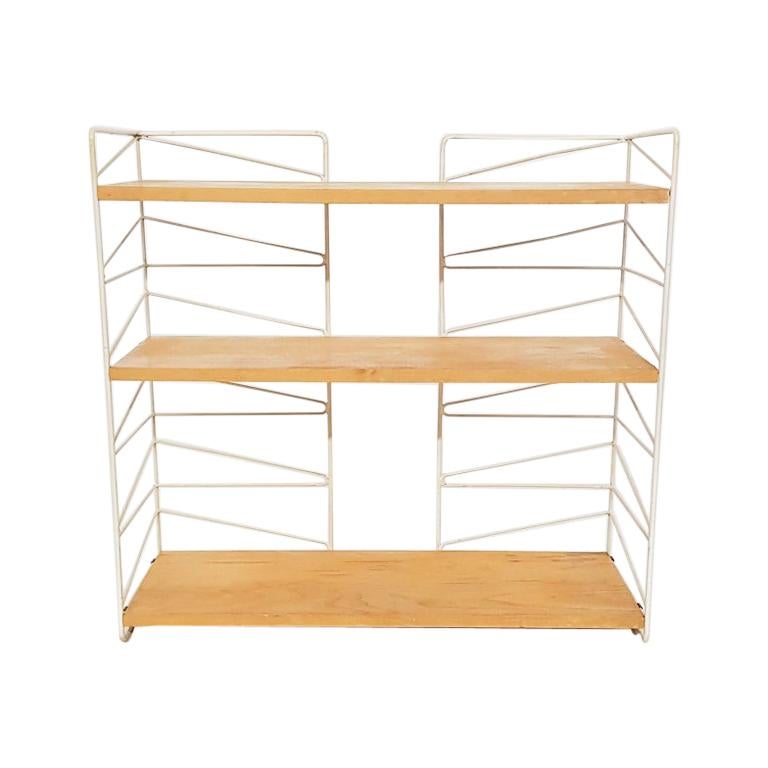 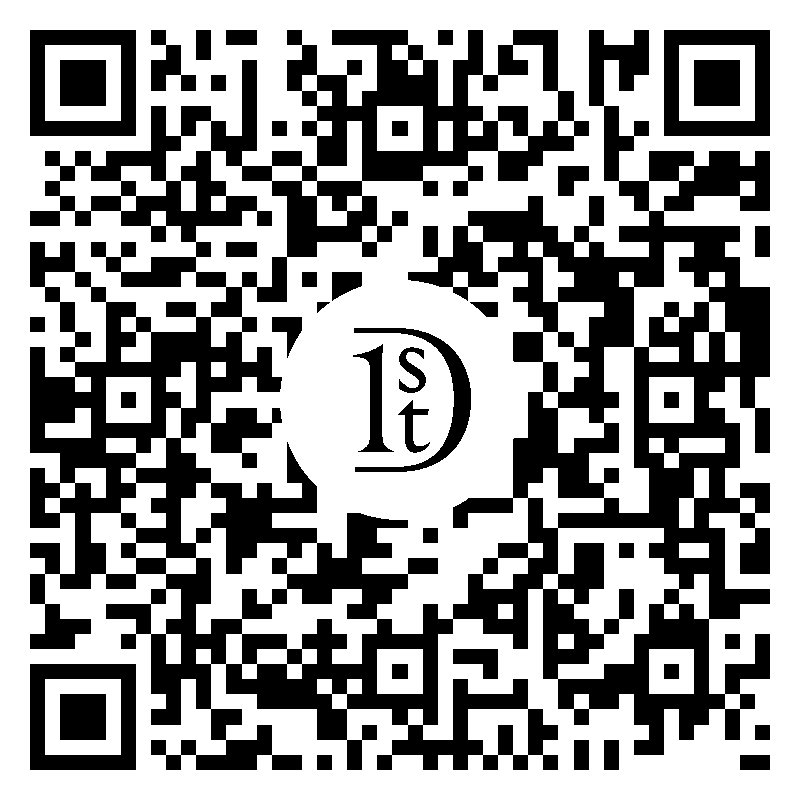 This rare shelving system is the 'UMBO' system designed in the early 1970s by Kay Leroy Ruggles for Directional, and was first published in New York magazine on September 25, 1972. This monumental example in a beautiful brown color with a total of 53 elements, detailed below. Constructed from Uniroyal ABS, a product which is durable, nontoxic, and more heat-resistant than wood which was also used to make telephones at that time. Was offered in white, tangerine and brown - this set is in the brown color option. The color was sprayed on in the factory and should not chip off under normal use. The modular system allows to create different types of furniture such as console or coffee tables, bench, bookcase, room dividers, sofa tables, cocktail tables, side or end tables, nightstands or bedside tables, cafe and breakfast or dining tables and more. Produced only for a short time from 1972 to around 1974, due to the ensuing energy crisis of 1973 which marked the end of the era of cheap gasoline and, therefore, plastics causing UMBO to go out of production in 1974 making these examples extremely rare and sought after by collectors. Finding a set this large is much more rare. This wall system became a huge hit for Directional who produced a wide variety of modules and since UMBO was fully modular, it could be arranged and re-arranged at any time into fun and creative solutions and uses for your home. UMBO was even available with a desk, dining table, bed frame or wall shelves module which made it perfect for small apartments such as those in Los Angeles and New York. The particular configuration seen in our photos was put together by our photographer just as an example of how it can be configured but it can be rearranged, expanded or divided to your liking. Kay Leroy Ruggles was a pioneer of inventions and lifelong entrepreneur with a highly successful career winning many awards and holding numerous patents in which he designed and developed over 100 products in a wide range of industries, including automobile, space, furniture, window coverings, amusement park and musical instruments, for example he created the tubular water slide and when Richard Nixon wanted a new bathroom for Air Force One, that job went to Ruggles. Later, Hugh Hefner had custom-designed rooms by Ruggles and so did Ted Kennedy and Disney World. Consider this original UMBO bookcase system by Kay Leroy Ruggles for Directional for a Space Age Modern, Atomic Modern, Mid-Century Modern, Scandanavian Modern or Danish Modern home or penthouse apartment but could also look fantastic in a Contemporary or Post-Modern room. Also consider mixing it up in a Traditional, Transitional, Classical or Art Deco room with a splash of juxtaposition. The Umbo bookshelf / etagere system can also be an apt choice in a commercial project such as a hotel lobby lounge or members club, creative design studio or high-rise executive office. MEASUREMENTS: As photographed: H 57" x W 193" x D 12" Included in this set are a total of 53 elements which include: 29 - T elements 5 - Cross elements 10 - Corner elements 9 - Flat elements *additional pegs will be supplied as well CONDITION: Very good vintage condition with only minor light wear and surface scratches, excellent collectors example ready for immediate use.

Recognized Seller
These prestigious sellers are industry leaders and represent the highest echelon for item quality and design.
Diamond Seller
These expertly vetted sellers are 1stDibs' most experienced sellers and are rated highest by our customers.
Established in 2012
1stDibs seller since 2015
1,504 sales on 1stDibs
Typical response time: 2 hours
Associations
20th Century Specialists
More From This Seller

$22,700
Orchestra, Contemporary Leather and Wood Modular Shelving System
By Matì
Located in Tradate, IT
Orchestra is a sectional bookcase but, nevertheless, immune from the formal rigidity of a repetitively geometrical modularity. Made up of three elements in different sizes and depths...
Category

$4,700 / item
Shelving System in Teak
Located in London, GB
Adjustable shelving system in teak. Three sections. Teak, lacquered metal with brass details. All shelves can be adjusted to suit. The unit can actually be freestanding if requ...
Category