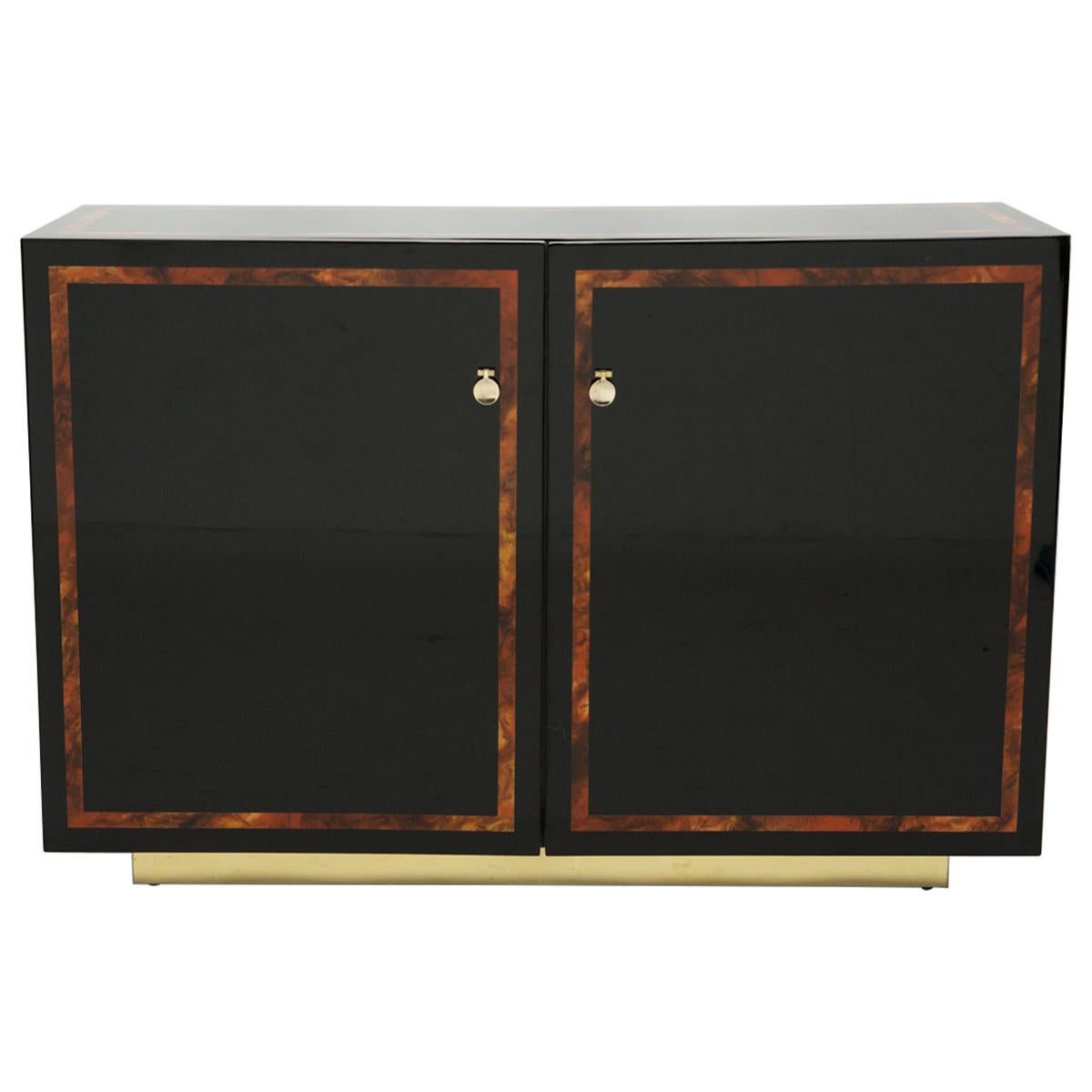 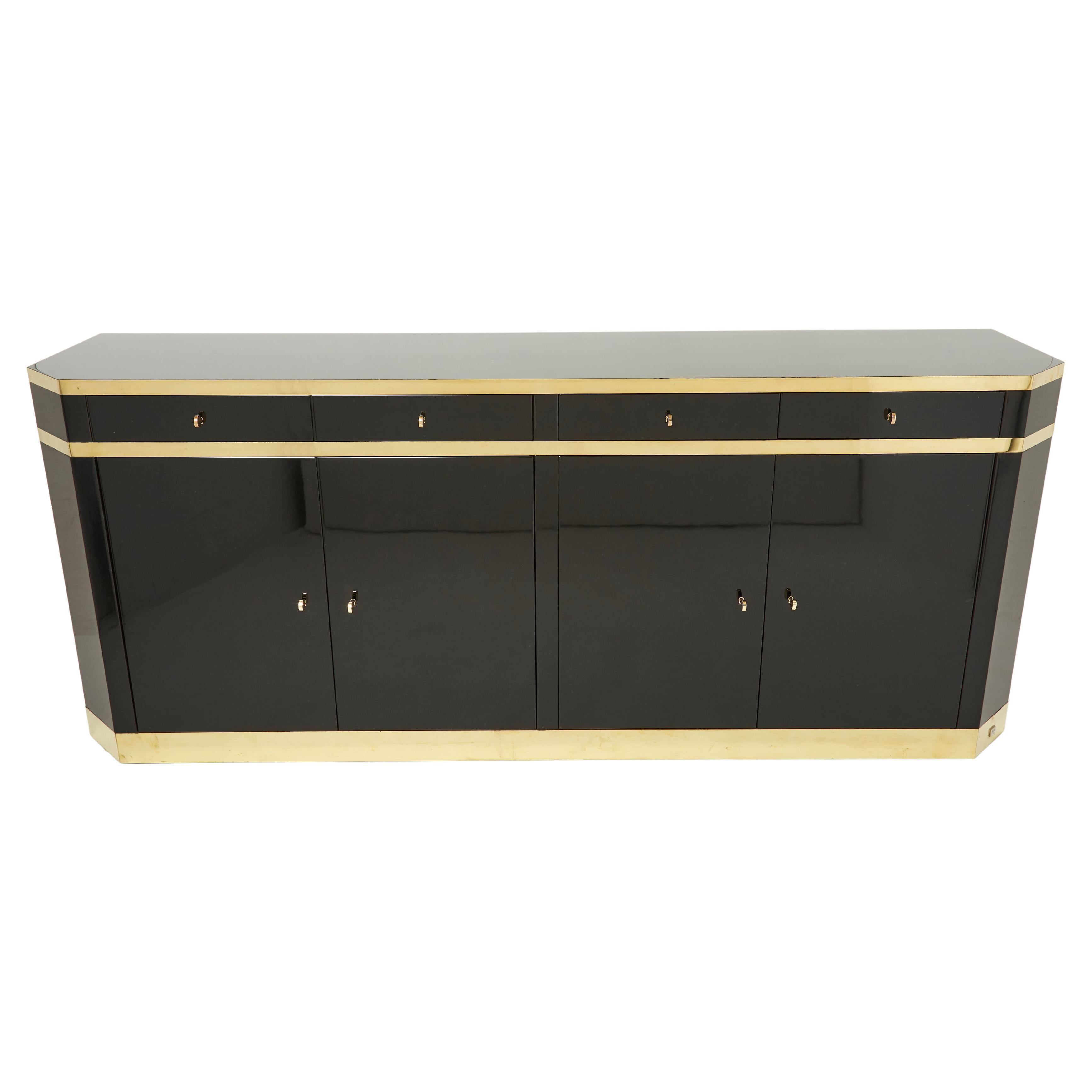 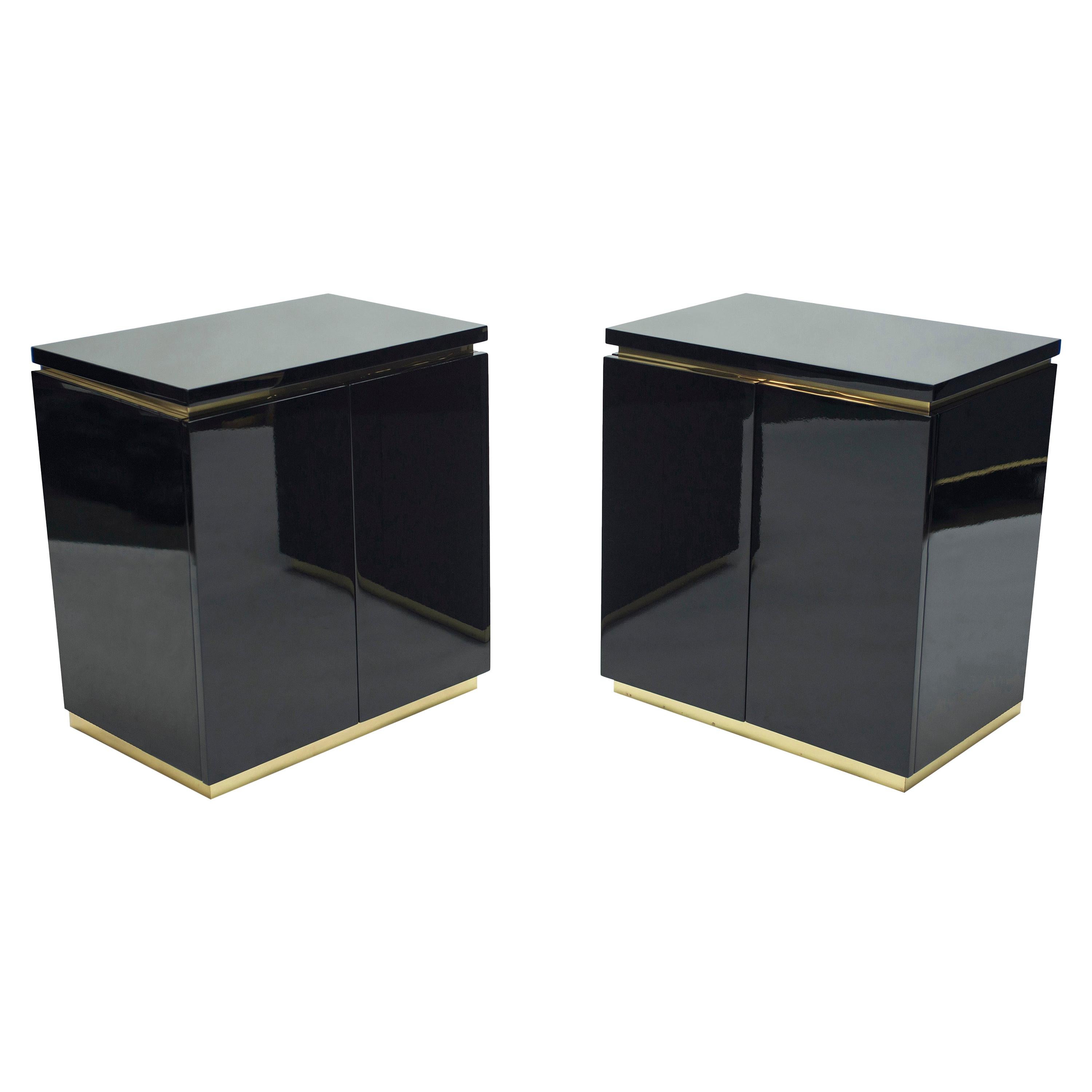 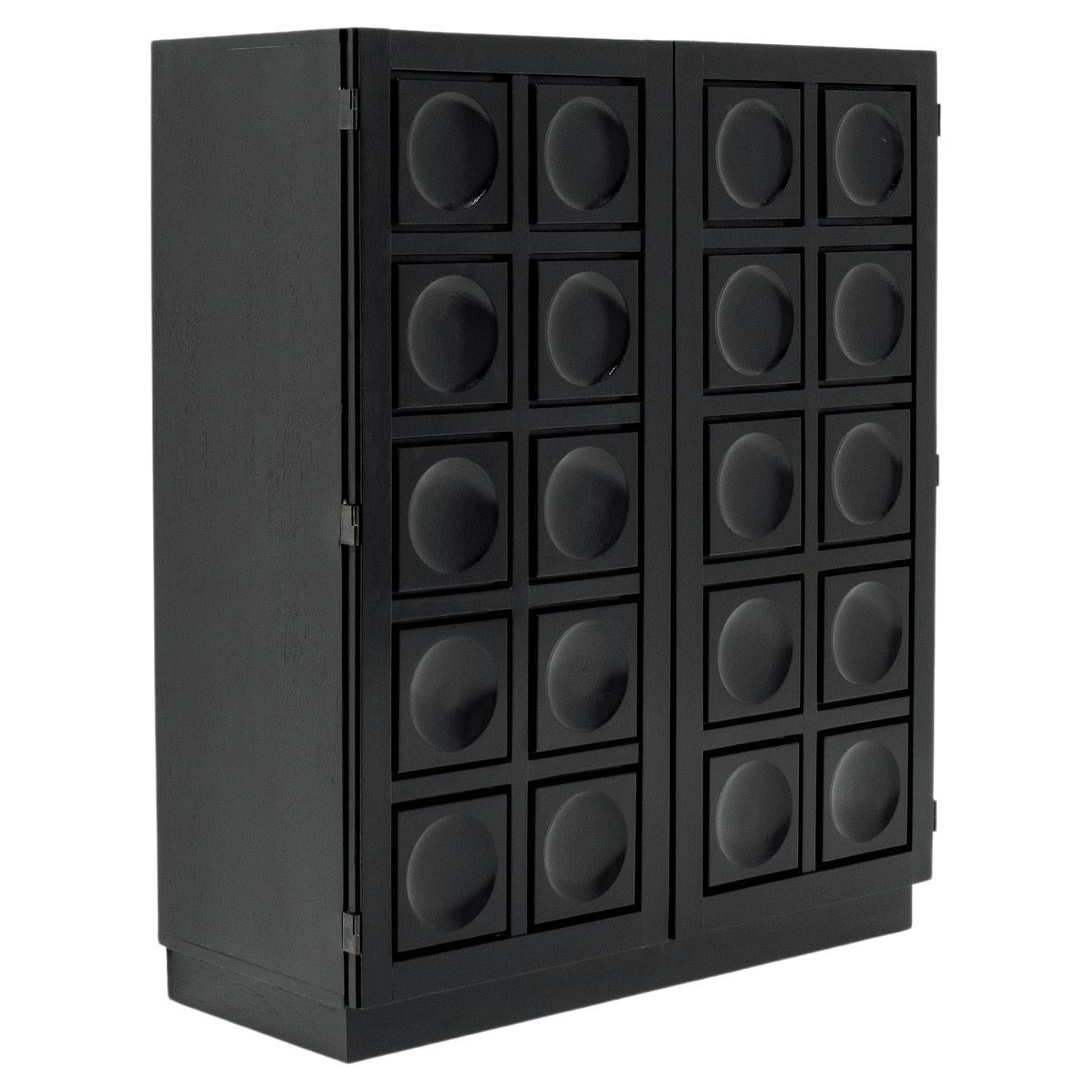 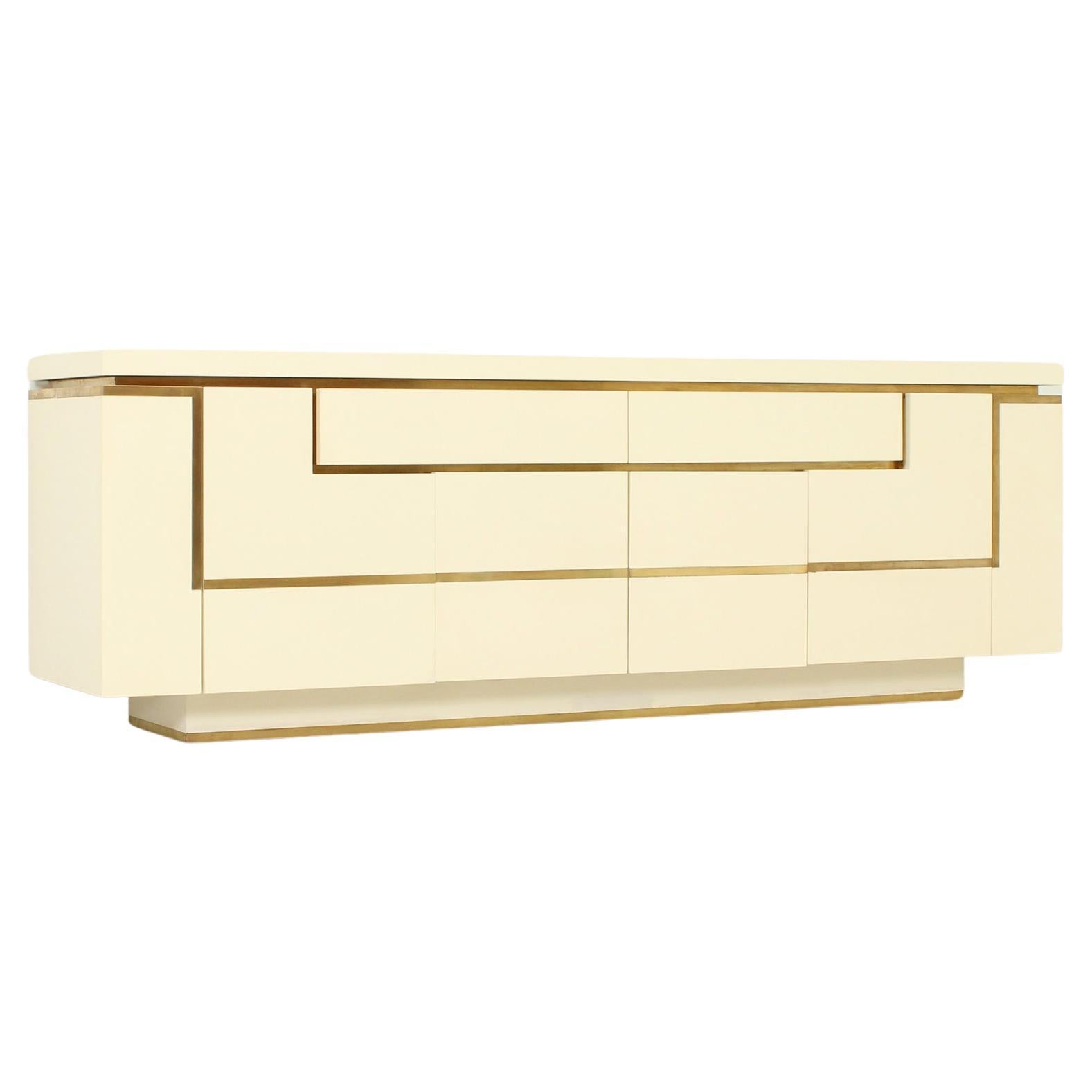 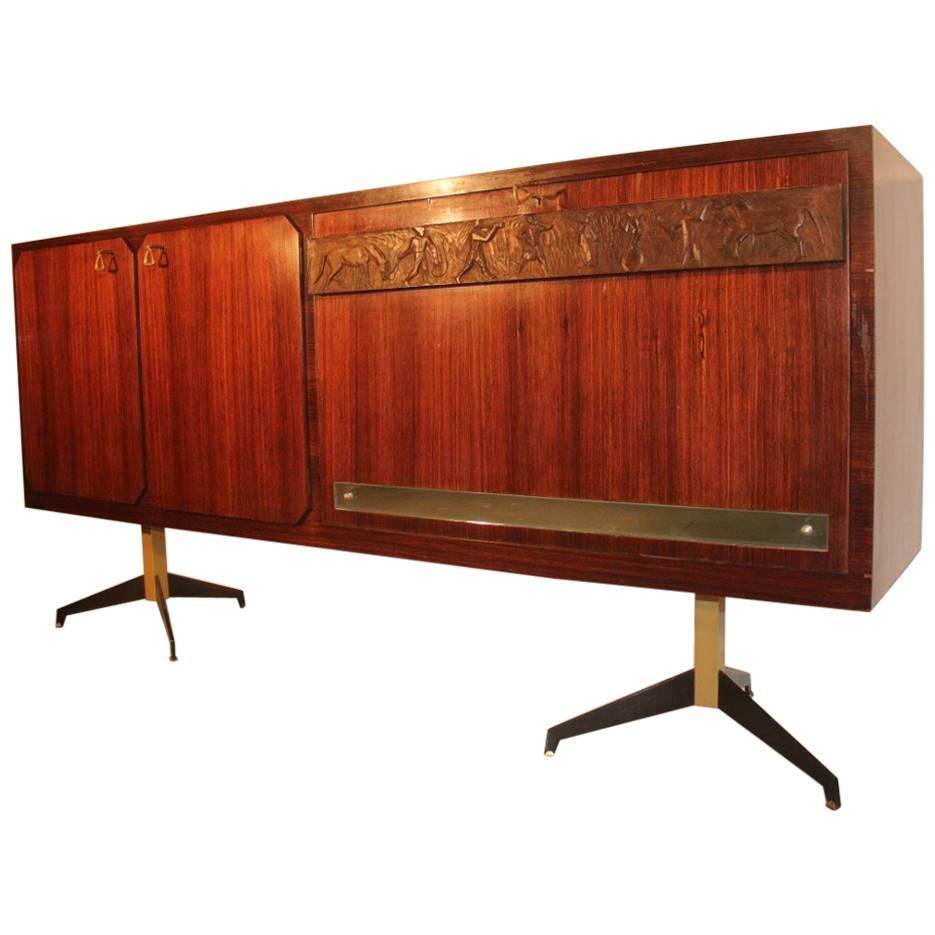 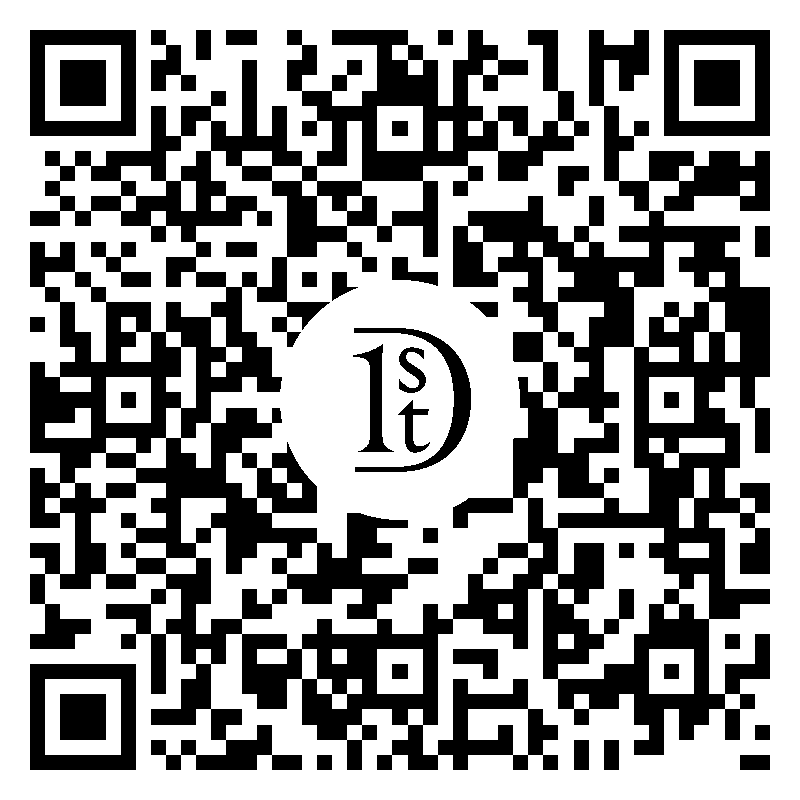 A timeless vintage piece, this mid-century cabinet bar sideboard feels imposing and glamourous, with thick, straight lines of brass adorning its exterior of reflective black lacquer. Glossy black lacquer, paired with bright brass accents, feels crisp and luxe. Its boxy, simple style, featuring four doors and one drawers, is typical of both the 1970s and designer Jean Claude Mahey for Roche Bobois design. The two external doors design is amazing, with burlwood and brass details, and can be used for storing glasses and barware. It has been fully restored and relacquered, and is in a great vintage condition. 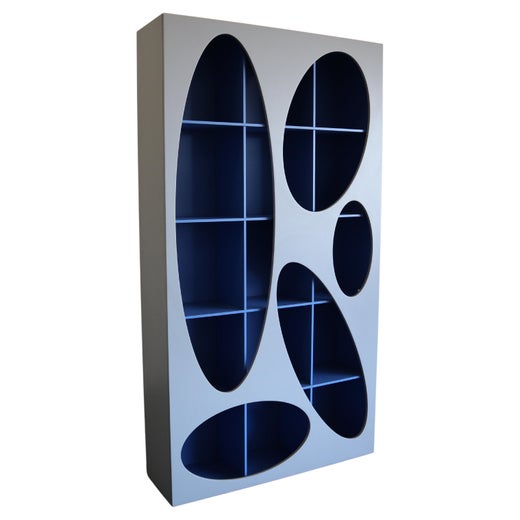 In 1974, Roche Bobois opened its first showroom in the United States on Madison Avenue in New York City. The celebrated luxury French furniture brand is now in 50 countries with more than 200 stores.

Roche Bobois’s offerings over the years have included everything from mid-century modern armchairs to Art Deco case pieces to sculptural outdoor cocktail tables framed in metal wire — shop these classics now on 1stDibs.

About the Seller
5.0
Located in Paris, France
Platinum Seller
These expertly vetted sellers are 1stDibs' most experienced sellers and are rated highest by our customers.
Established in 2013
1stDibs seller since 2017
128 sales on 1stDibs
Typical response time: 1 hour
More From This Seller

$6,826
Ivory and Brass Lacquered Sideboard, 1970s
Located in Brussels , BE
Ivory lacquered sideboard and golden ornaments produced in the 70s. Condition consistent with the age of the piece.
Category

$1,807
Contemporary Lacquered Sideboard/Antique Brass Base
Located in New York, NY
Sideboard with 4 doors, inside shelf and metal base. Cabinet is lacquered with top veneer walnut, metal base in epoxy powder. Custom sizes and finishes upon request. Top is also of...
Category