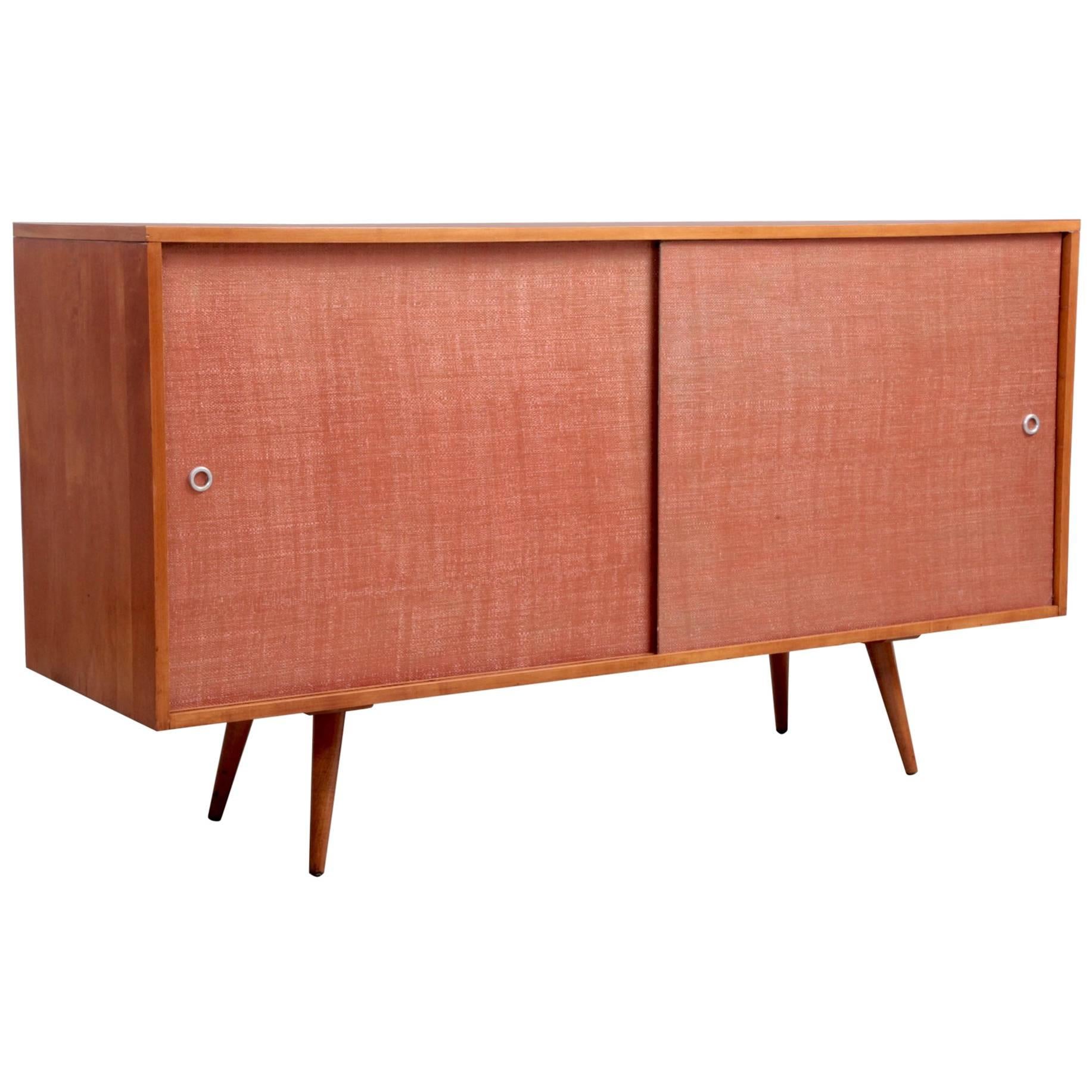 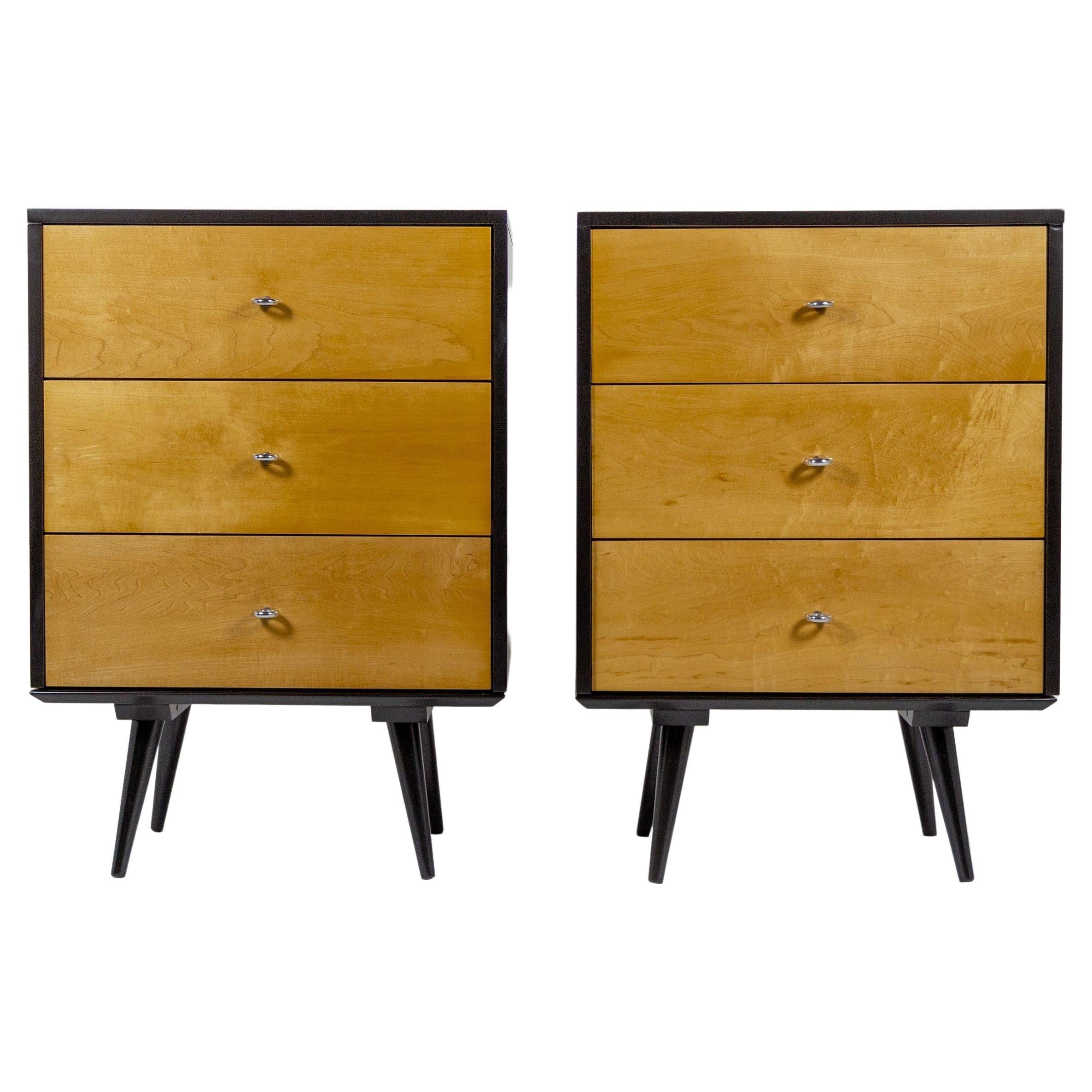 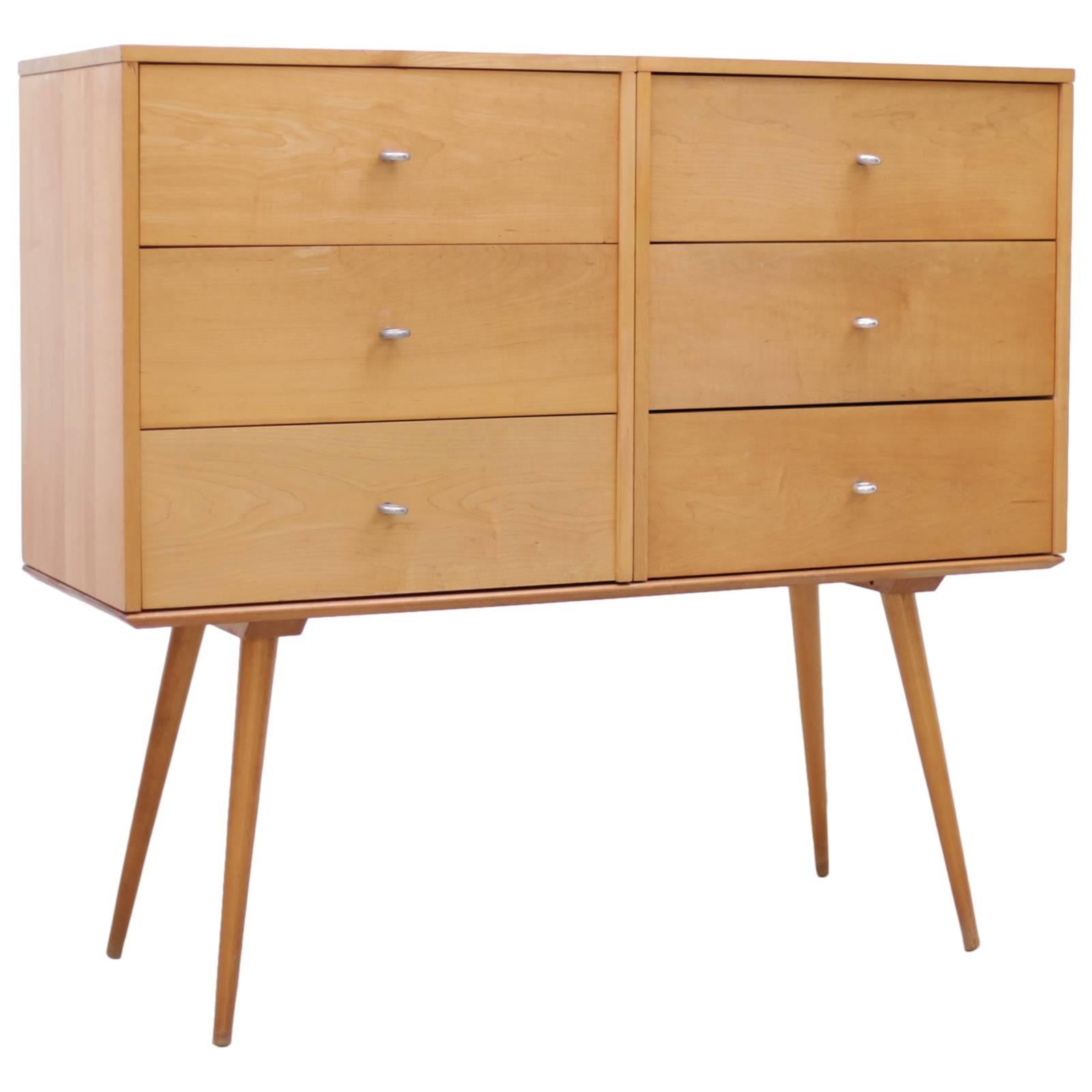 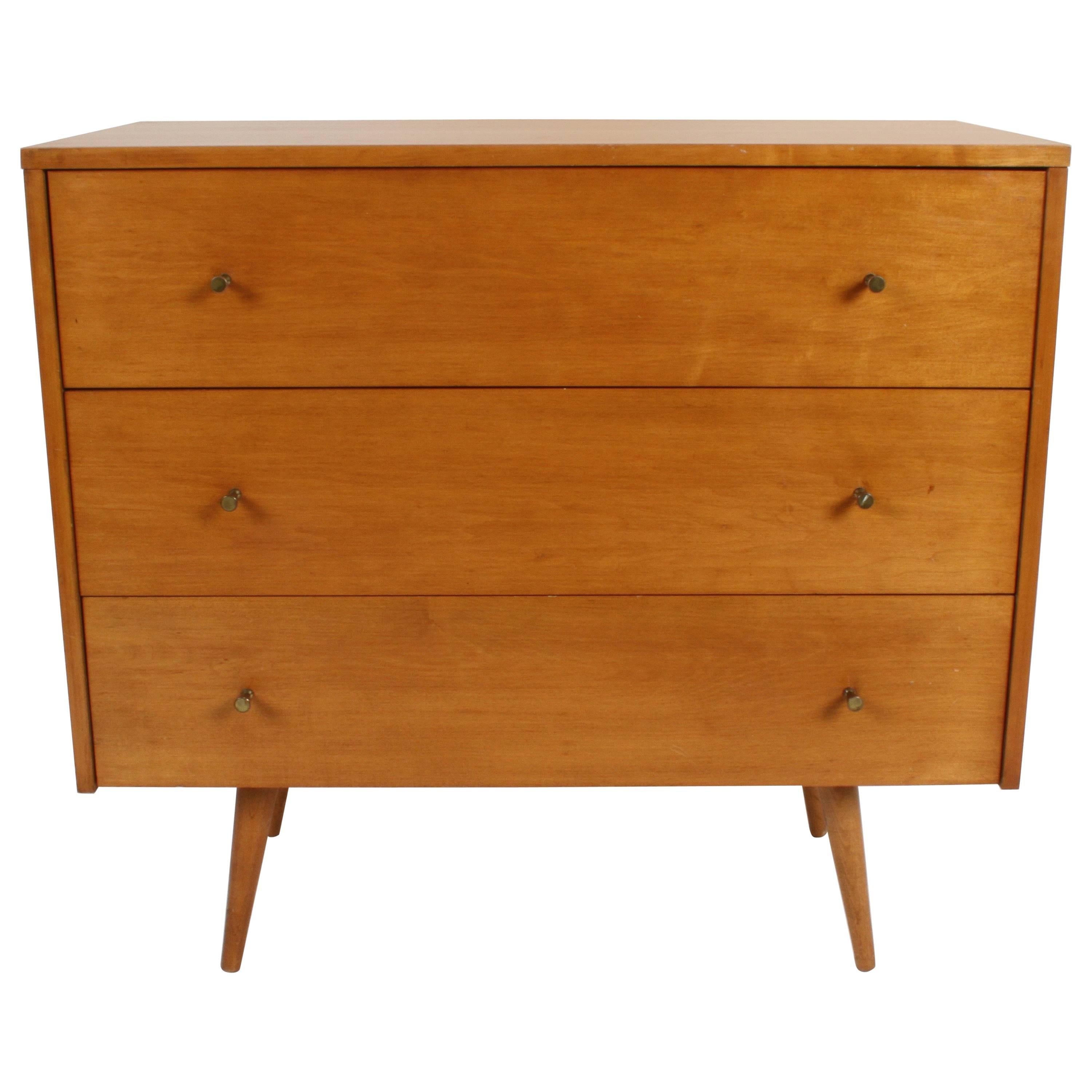 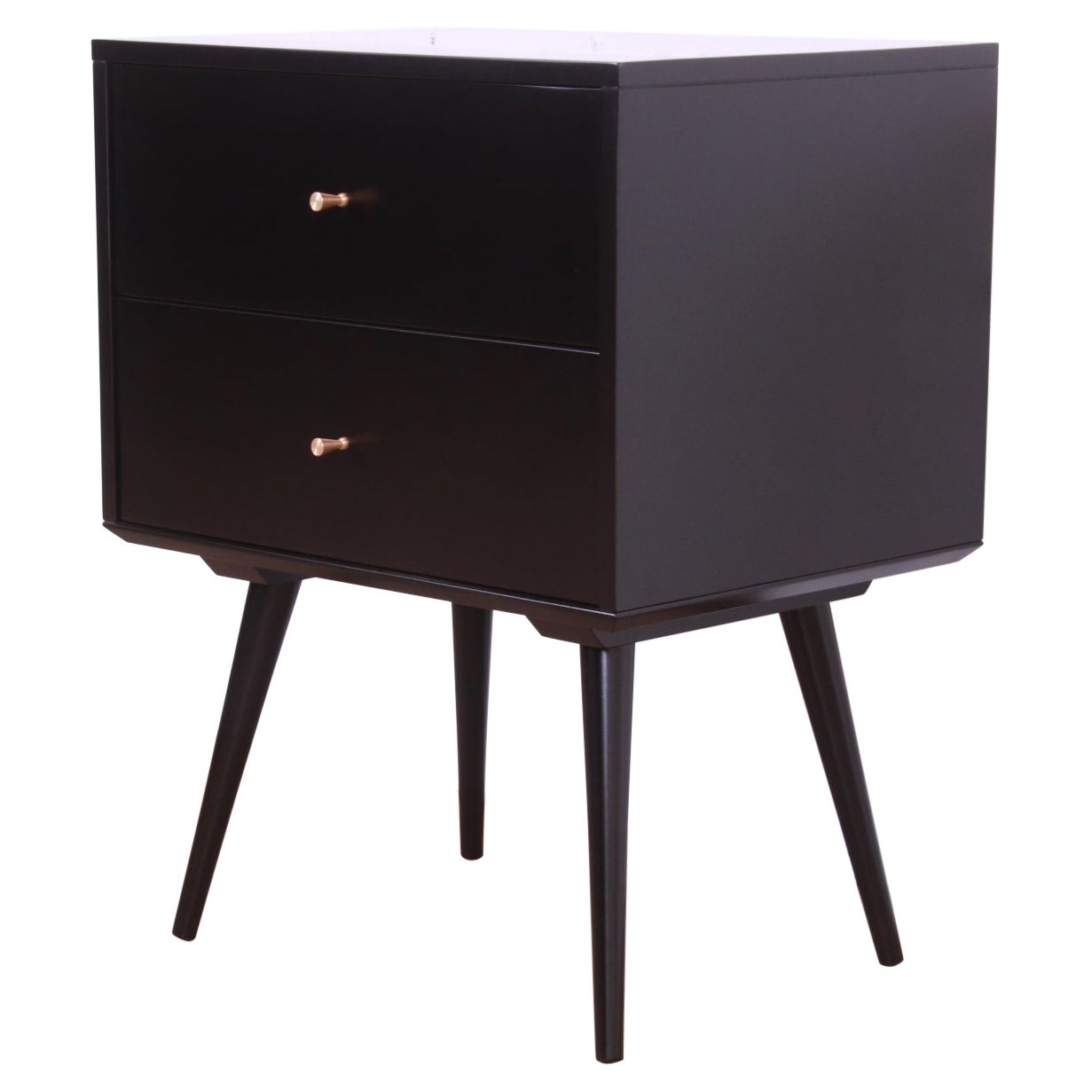 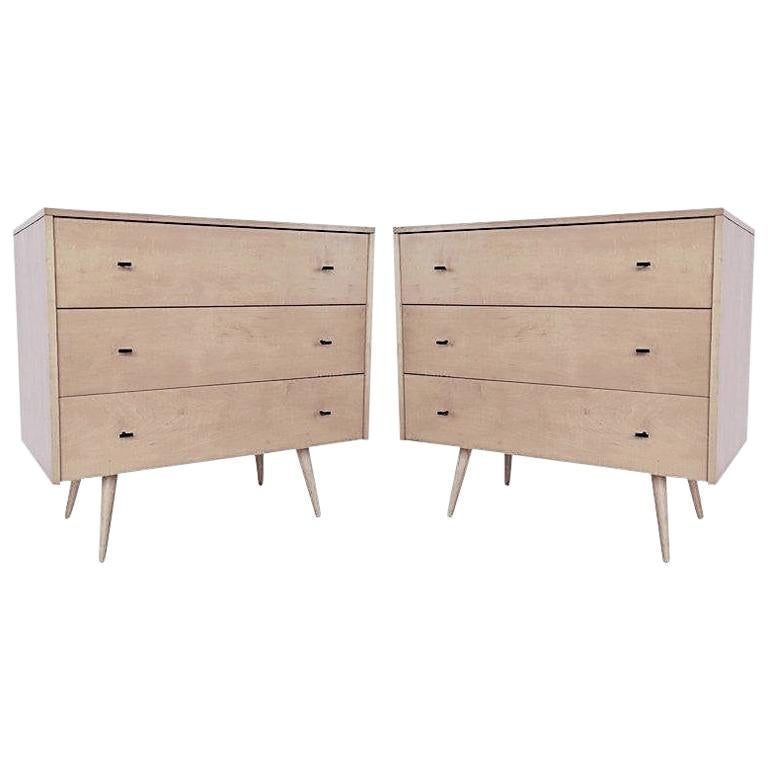 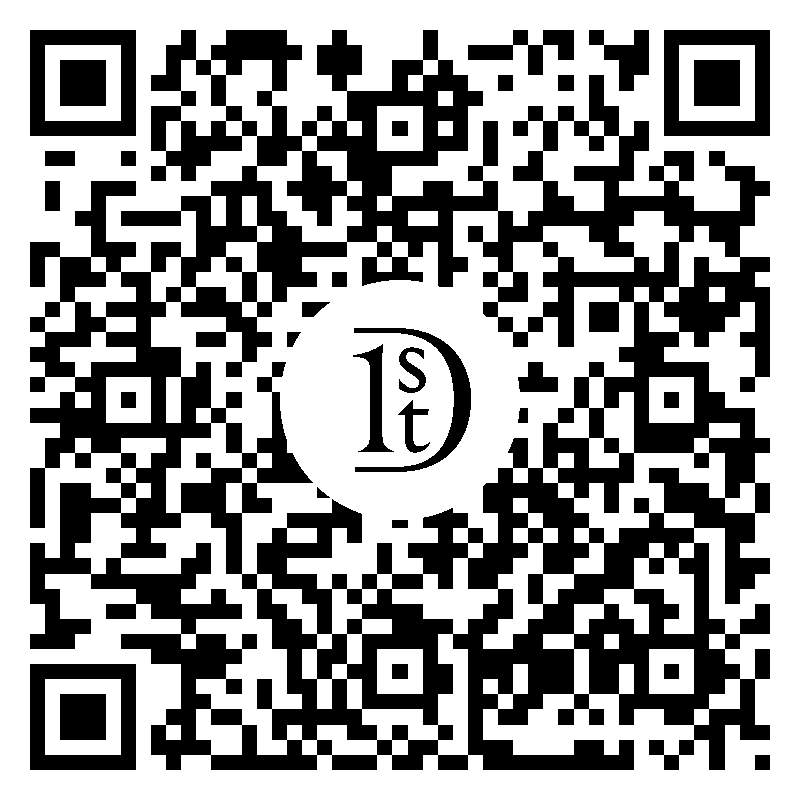 Designed by Paul McCobb for Winchendon Furniture's Planner Group line, this chest comprises a three-drawer maple case piece that sits atop a low detached maple table that could also serve as a coffee table. The piece has been expertly refinished but features the original aluminum ring drawer pulls. The case dimensions are 18.25" D x 24" W x 24" H. A corresponding pair of two-drawer maple nightstands is also available. 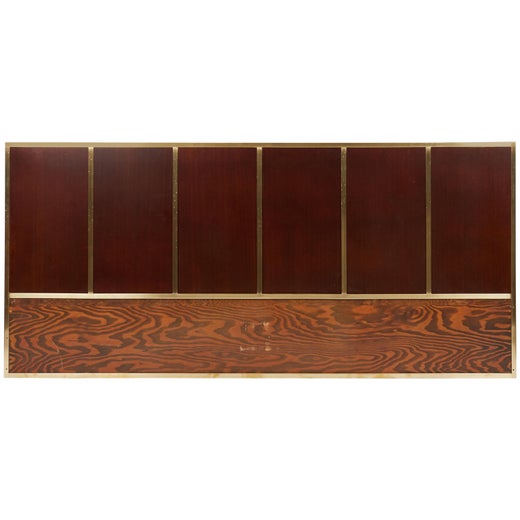 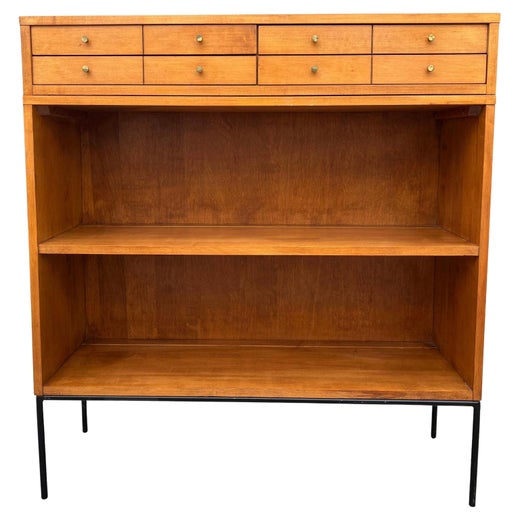 More than any other designer beside Russel Wright, the Massachusetts-born McCobb was arguably responsible for the introduction of modern design into middle-class American households — if for no other reason than that he designed the 1952 set for the original Today show. Of McCobb’s cohesive lines of furnishings, his best-known Planner Group gave homes an instant “look.” McCobb designed for several companies, most notably Directional, the New York firm he cofounded with Mesberg that also produced designs by other legends such as Paul Evans and Vladimir Kagan.

Known for their superior quality and affordable prices aimed at new homeowners, vintage Winchendon case furniture, side tables and desks were must-have staples for middle-class Americans in the postwar years. McCobb and Mesberg’s Planner Group for the manufacturer boasts a wide range of furnishings created in woods such as walnut and maple.

McCobb drew on the simplicity of Shaker furniture and Windsor chairs and was an advocate for modular furniture. A new homeowner could plan for properly furnishing each room with the Planner collection — a brochure touted its versatility — beginning with a couple of pieces from the series and gradually introducing more seating, cabinets and tables, stacking and combining as needed.

McCobb shared the limelight with the likes of celebrated American designers Charles and Ray Eames and was supposed to appear in a 1961 issue of Playboy magazine — a mid-century tastemaker of sorts — alongside other designers such as Eero Saarienen, Harry Bertoia, Jens Risom and Edward Wormley. A social and charismatic figure, McCobb can be found in photos from a party that took place the night before, but he was too hungover the next day to join the photo shoot.

For more than a decade beginning in 1950, the Planner designs comprised the best-selling furniture suite in the United States.

1stDibs Buyer Protection Guaranteed
If your item arrives not as described, we’ll work with you and the seller to make it right. Learn More
About the Seller
4.7
Located in Dorchester, MA
Gold Seller
These expertly vetted sellers are highly rated and consistently exceed customer expectations.
Established in 1991
1stDibs seller since 2007
220 sales on 1stDibs
Typical response time: 1 hour
Associations
20th Century Specialists
More From This SellerView All
People Also Browsed
You May Also Like
Featured in Rare Finds: Shop our best valuesView All