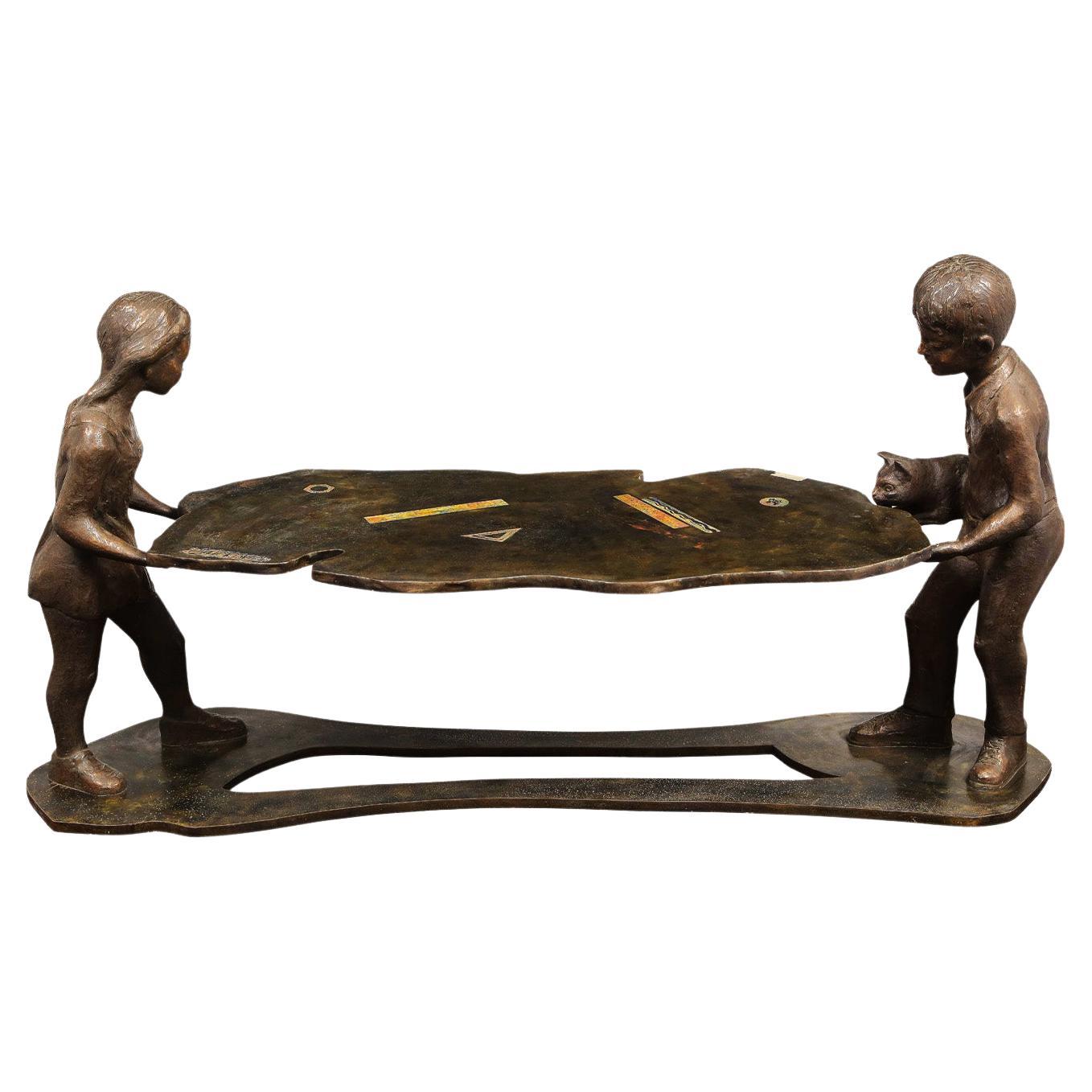 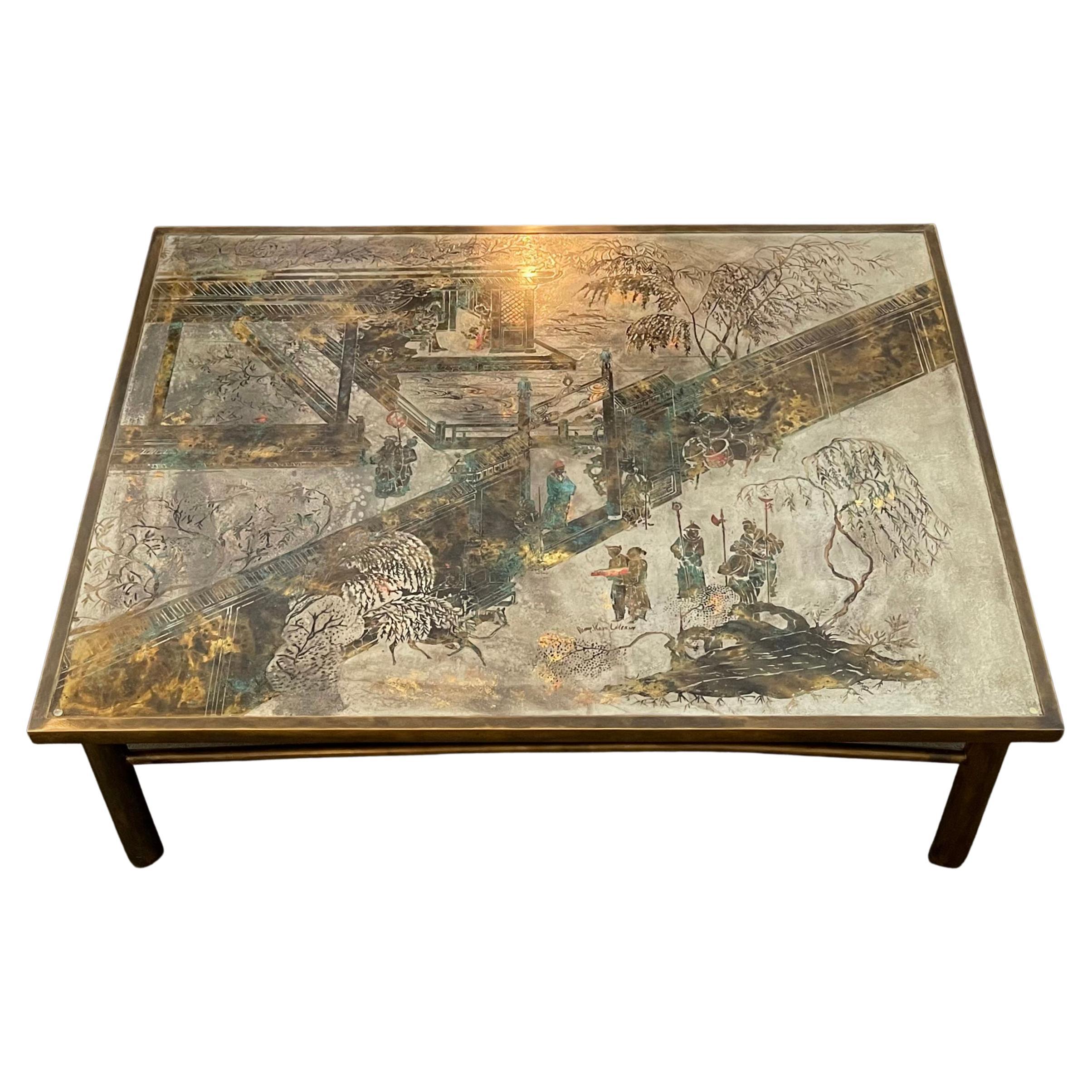 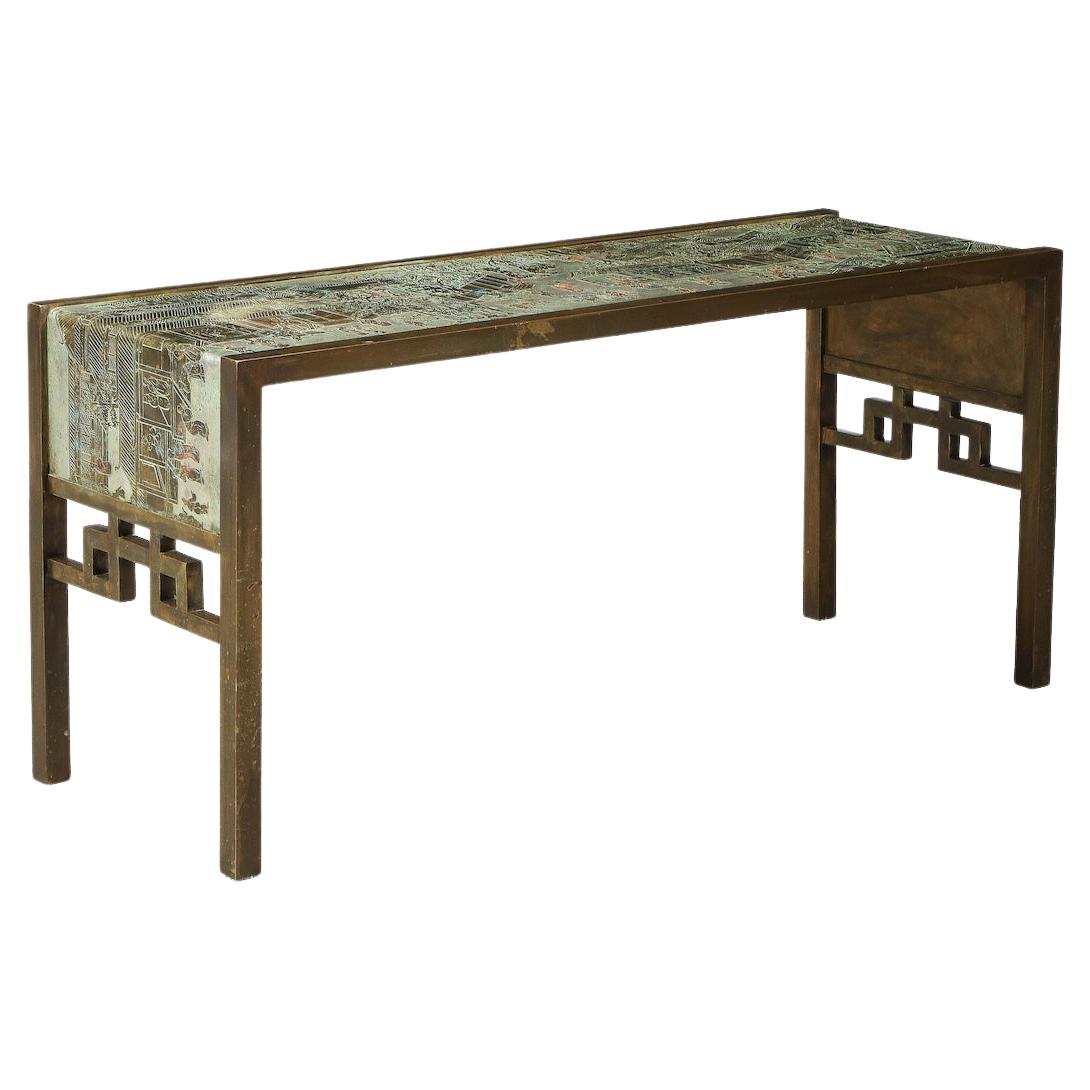 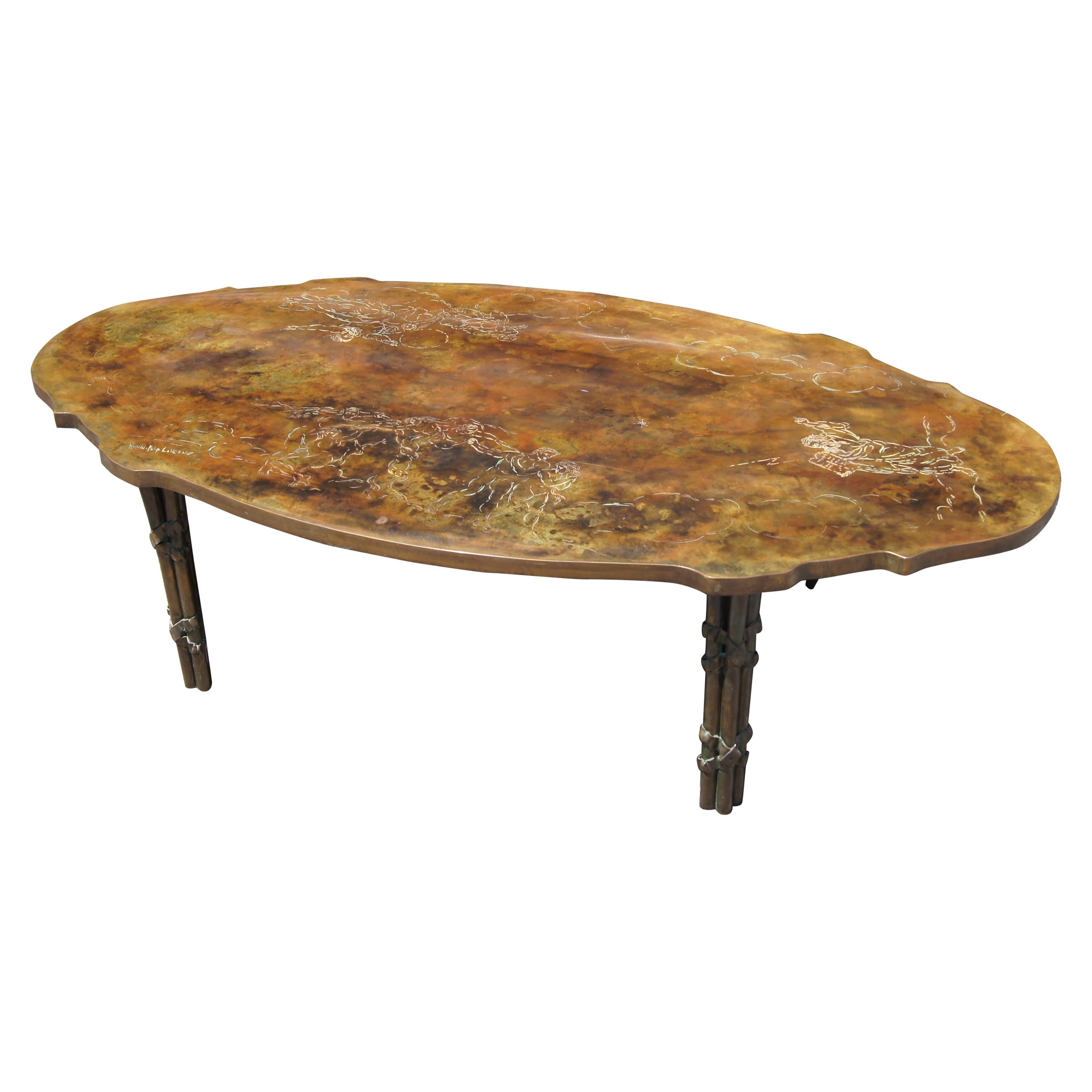 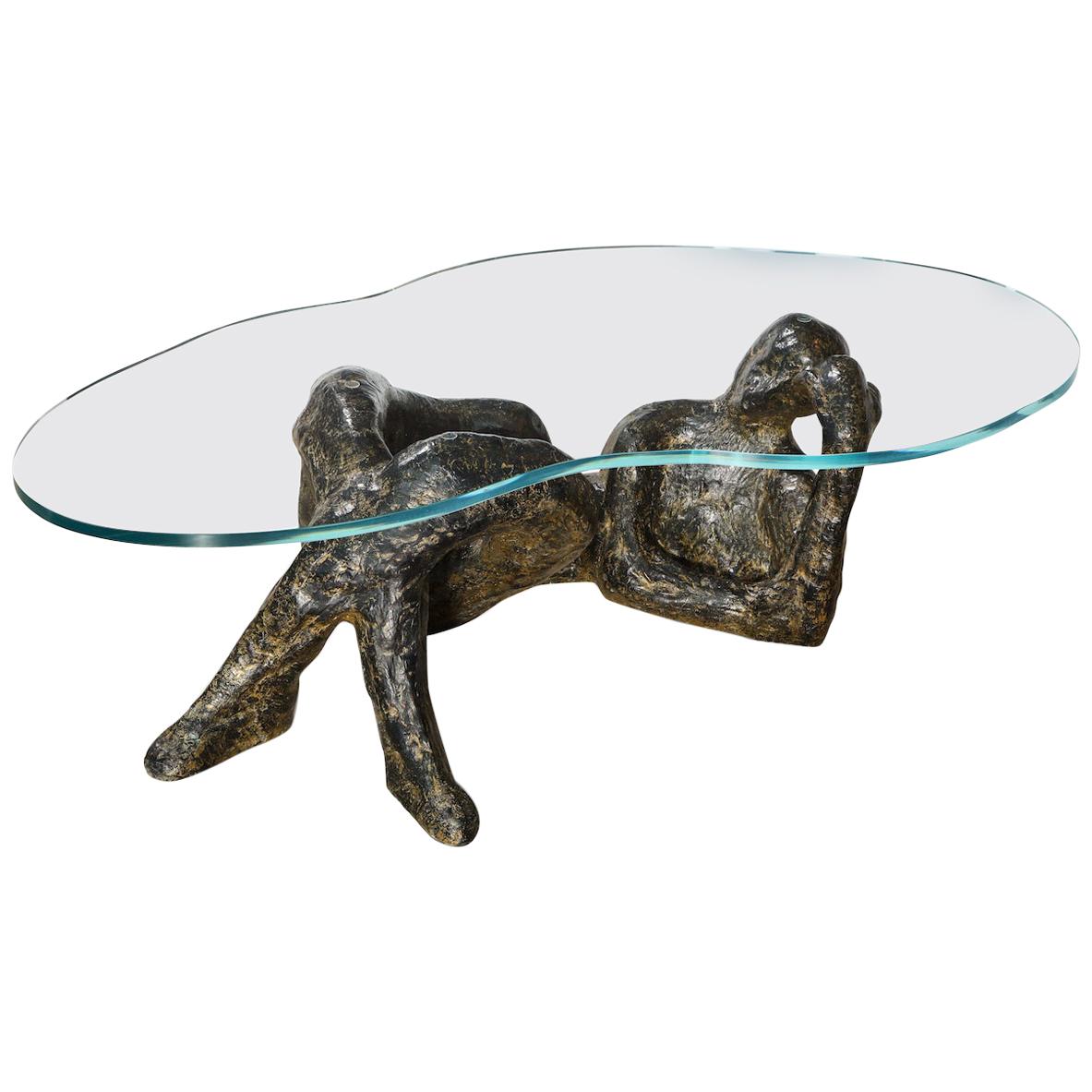 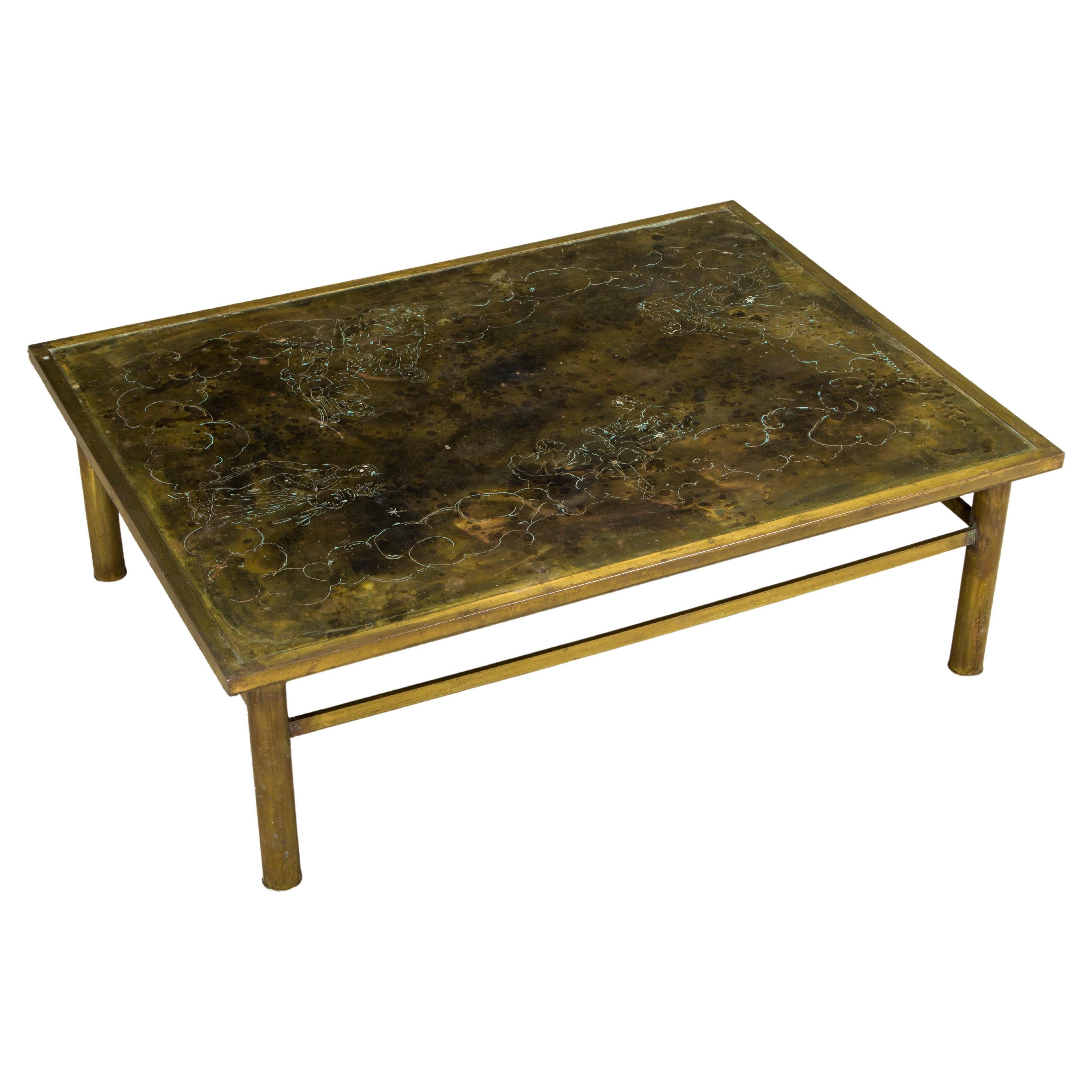 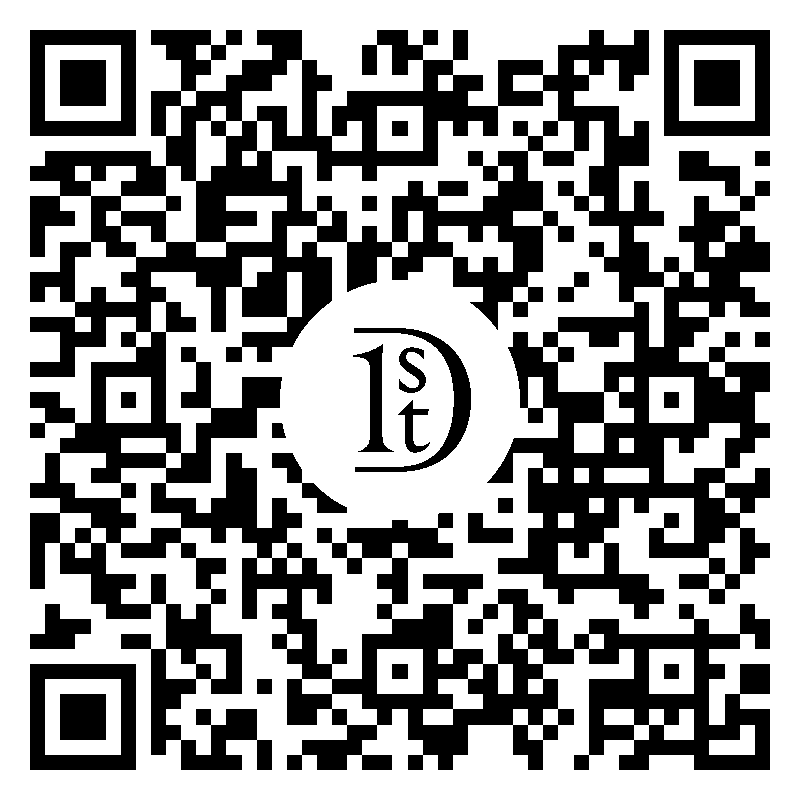 This important and documented bronze sculpture table named "Generation" by Philip and Kelvin LaVerne was sculpted circa 1964 and was featured on the cover of “Philip & Kelvin LaVerne: Sculpture III". Only two examples were made and the other example has a plain bronze top without colored enamels which indicates this was the exact table used for the cover photo which adds to its exclusiveness. Its large size allows this to be used as a coffee or cocktail table, console table or display table or can be simply displayed as sculptural fine art. This pièce de résistance for collectors of Philip and Kelvin LaVerne is exceptionally rare and highly coveted. Within one single work of functional fine art the artists explored several different techniques the LaVernes were known to employ. Two heavy cast bronze figures, a boy holding a cat and the opposite side a girl, holding the table top which features a gorgeous torched bronze surface with inlaid colorful enamels, one bearing the LaVernes signature. Another acid washed bronze flat plane serves as the base to this extraordinary piece. The cast bronze elements were done with a lost wax method. Philip and Kelvin considered themselves fine artists and sculptors, rather than furniture makers, and their gallery motto was "Works of Art". So for most of the collector and antique dealer world, we consider this a fine art sculpture that can be used as a coffee table, cocktail table, console table, media table or display table. It is sturdy and structurally sound, and since the materials are of a strong and robust nature - it is absolutely suitable for every day use. But of course, if you prefer, you can place it in your room purely for viewing purposes, it is similar to any other piece of quality fine art that you would otherwise place on a museum wall. This 'Generation' sculpture table by Philip and Kelvin LaVerne is an incredible option for the most discriminating interior design client or art collector. Consider for a Mid-Century Modern, Modern, Post-Modern or Contemporary home. Also an interesting addition of Juxtaposition in a French Neoclassical, Traditional, Spanish, Transitional or Hollywood Regency room. Due to its formidable materials, this is suitable for residential or commercial use, perfect for any magazine-cover-worthy interior design project. REFERENCE: Philip and Kelvin LaVerne, Sculpture III, Paper Catalog, 1960s. Shown on the front cover. MEASUREMENTS: H 35" x W 69" x D 24.5" Table Height: 18.5" CONDITION: Very good vintage condition with age appropriate patina to the bronze elements. Sturdy and sound, no damage or issues - ready for immediate use. 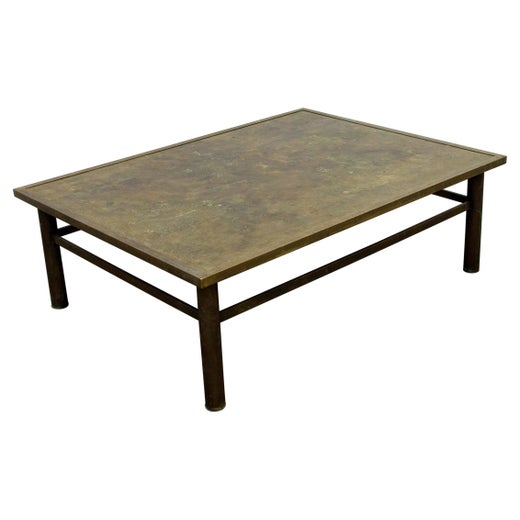 Shop All Philip and Kelvin LaVerne

Philip and Kelvin LaVerne Side Table